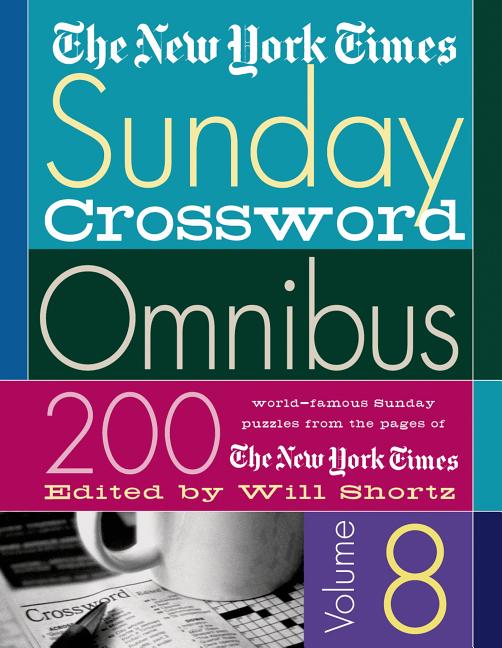 I have mentioned before that there’s some weird hippie woo thing going on with me and the puzzles, because too often to be random[1] it happens that something will occur while I am solving the puzzle that refers directly to some clue/answer in the puzzle, and usually as I am solving it.

After sixteen months, I just finished volume 8 (pictured to the left), and here are the weirdnesses that I noted.

[Part 1 of the weirdnesses]

1/2/22, #172: The week before, my friend Chas was on Jeopardy; the answer to the Final Jeopardy was the Arno River / 21A: River spanned by the Ponte Vecchio

One final false alarm: 3/3/22, #198: Episode of Home Economics, Connor has to step in to partner his housekeeper in a salsa competition / 8A: Latin step, but alas, it was SAMBA, not SALSA.

So over the course of sixteen months, I had thirty-three bizarre coincidences, and that’s out of 100 puzzles. That’s a pretty high woo-to-reality ratio, people. You’d think I would have won the lottery by now.

I’ve blogged about this once before, but the serendipitous overlap between the New York Times crossword puzzle and my life is often unnerving.

I have a big fat book of Sunday puzzles that I work through while we’re watching TV, and here are some of the occurrences. (This also happens with the daily puzzle I do online.)

(Be patient; this is leading to a really bizarre conclusion.)

And now, finally, the exciting conclusion — or is it?? — to this series of weird coincidences.

Yesterday, August 29, I was tootling around Facebook and came across this post from an old friend, David Hammett, who had taught math at GHP for several years and still returned to help run the game show segment of the math tournament. 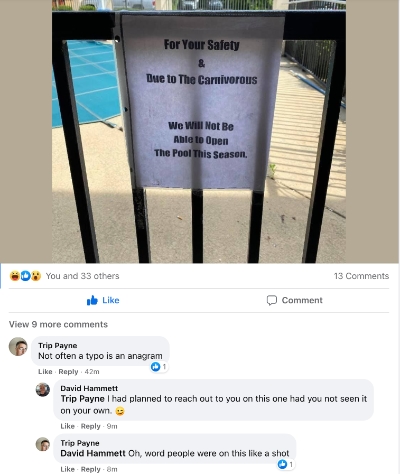 I had seen the image several times, but I had not quite made the connection that CARNIVOROUS was an anagram of CORONAVIRUS, but David’s friend Trip Payne did. Duh.

As fate would have it, the puzzle I completed on Saturday night was called Commanders in Fiche, wherein the themed answers had the last names of our presidents anagrammed, e.g., PRESIDENT OF THE LUNAR SOCIETY? >>JIMMY CRATER, etc. 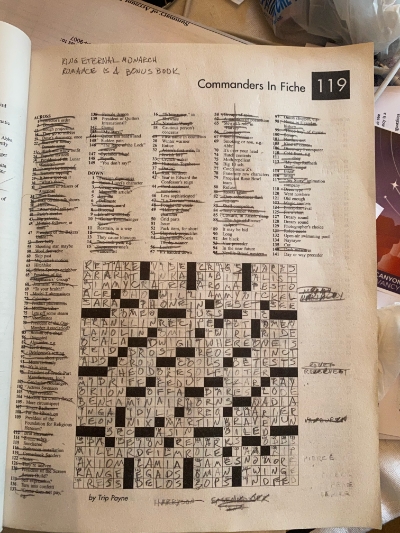 I don’t think I’ve blogged specifically about this, but, you guys, I seem to have a cosmic connection with the New York Times crossword puzzle. Multiple times in a week, either in the daily puzzle or the mega-collection of Sunday puzzles I amuse myself with of an evening (I’m on my second book, thank you very much), something will evince itself in my life that is a direct reference to a clue/answer in the very puzzle I am working on.

It’s bizarre. My Lovely First Wife  is the TV watcher in the family,  and as we sit watching The Crown or The Good Place or whatever hellish Hallmark holiday movie she’s binging, I’ll be working on  a puzzle in my recliner, and pop! as I work on a clue, it’s referenced in Holiday Princess or whatever the hell we’re watching.

Don’t believe me? This just happened and I came upstairs to blog about it.

This morning, a former neighbor dropped by with some fresh-baked bread and a few other things. One of the items in the bag, which she oddly did not mention, was this: 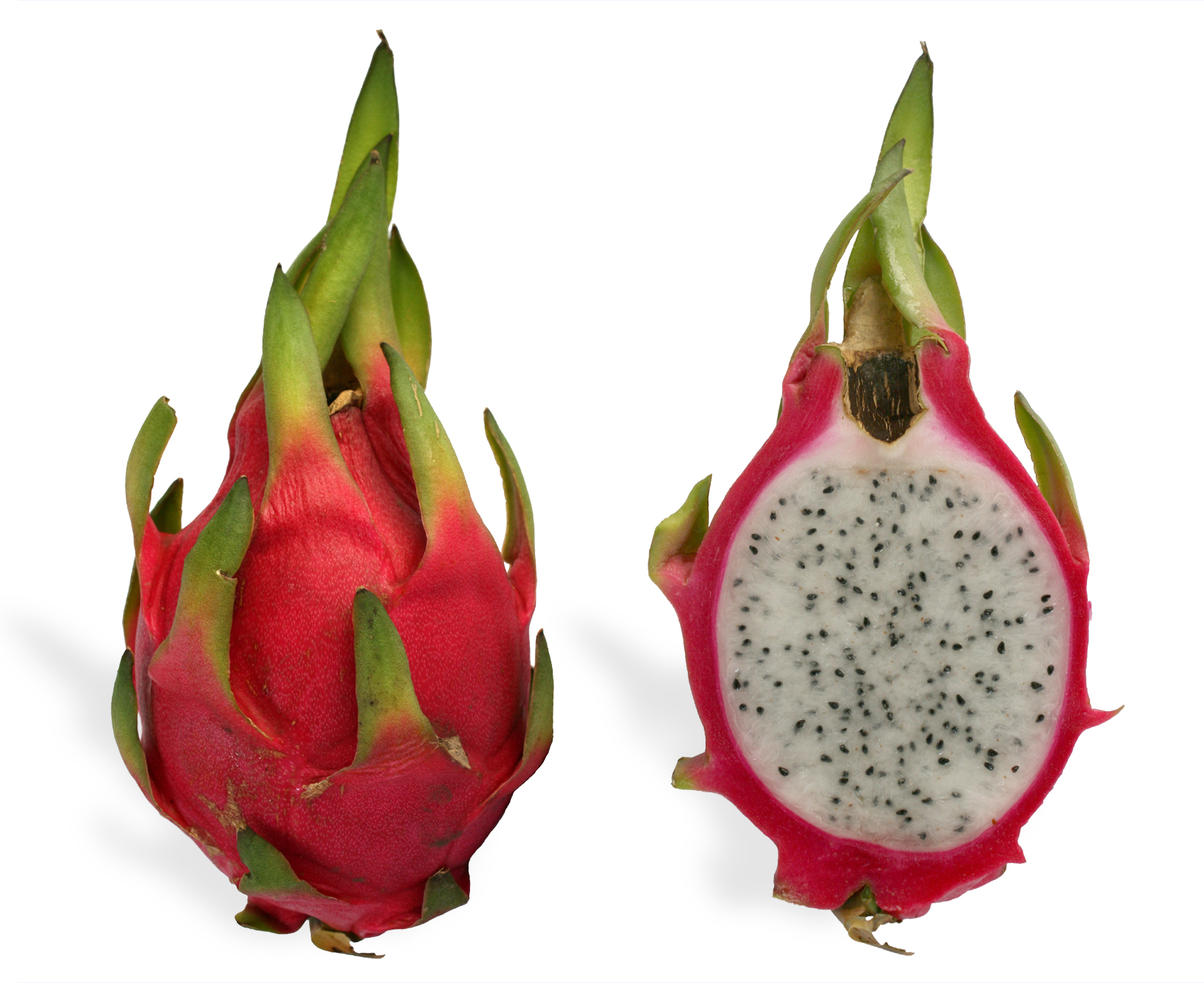 This is a dragon fruit. I knew what it was, but what I didn’t know is what to do with it.

So off I go to the intertubes to find out. First stop, Wikipedia, which alas was all scientific without any regard to those of us who had to consume the thing.

The only thing Wikipedia had to say was this:

Dragon fruit is used to flavor and color juices and alcoholic beverages, such as ‘Dragon’s Blood Punch’ and the ‘Dragotini.’

Alcoholic beverage, you say? Show me that footnote.

I followed the link, which led to: 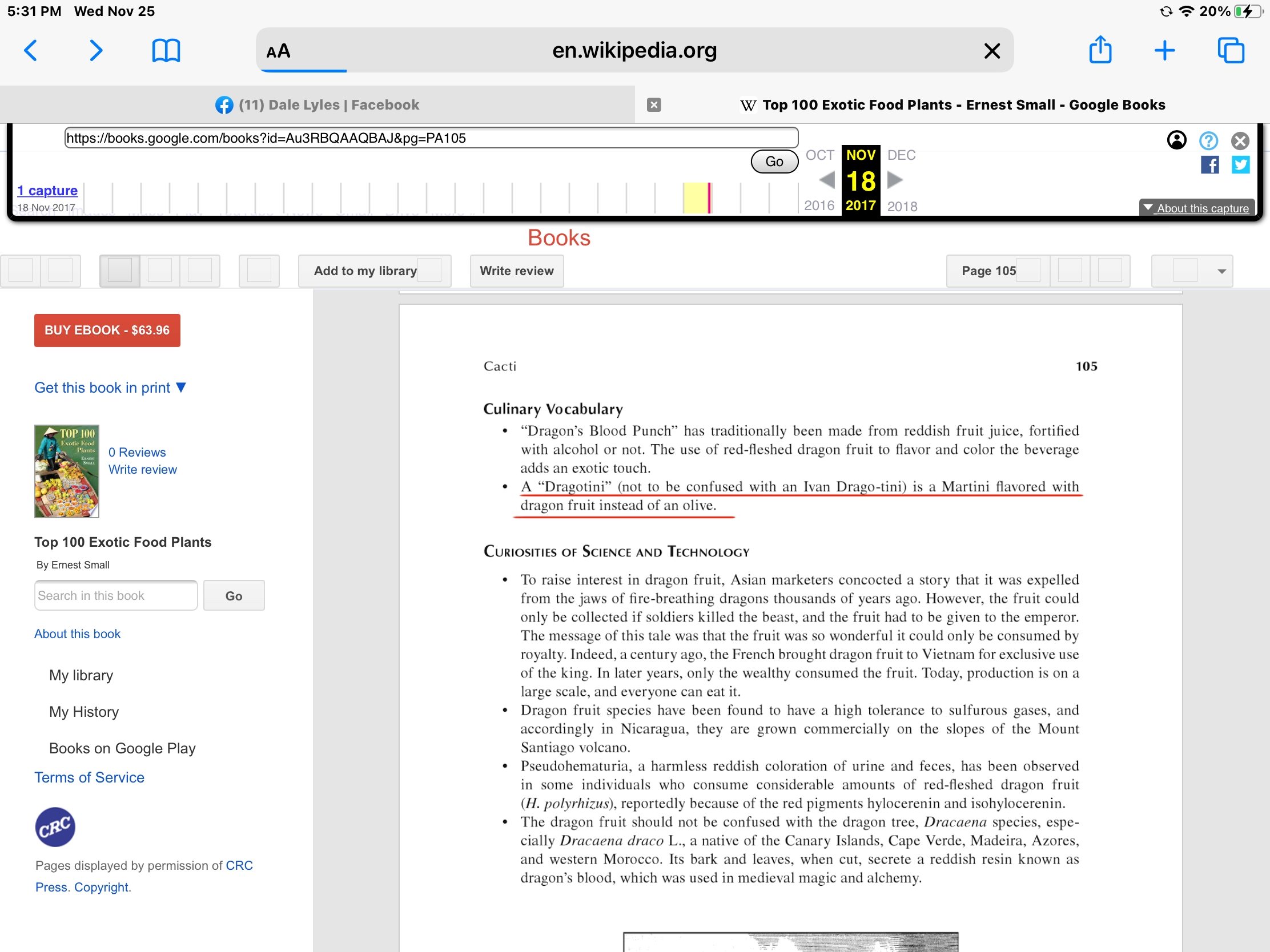 Did you get that? 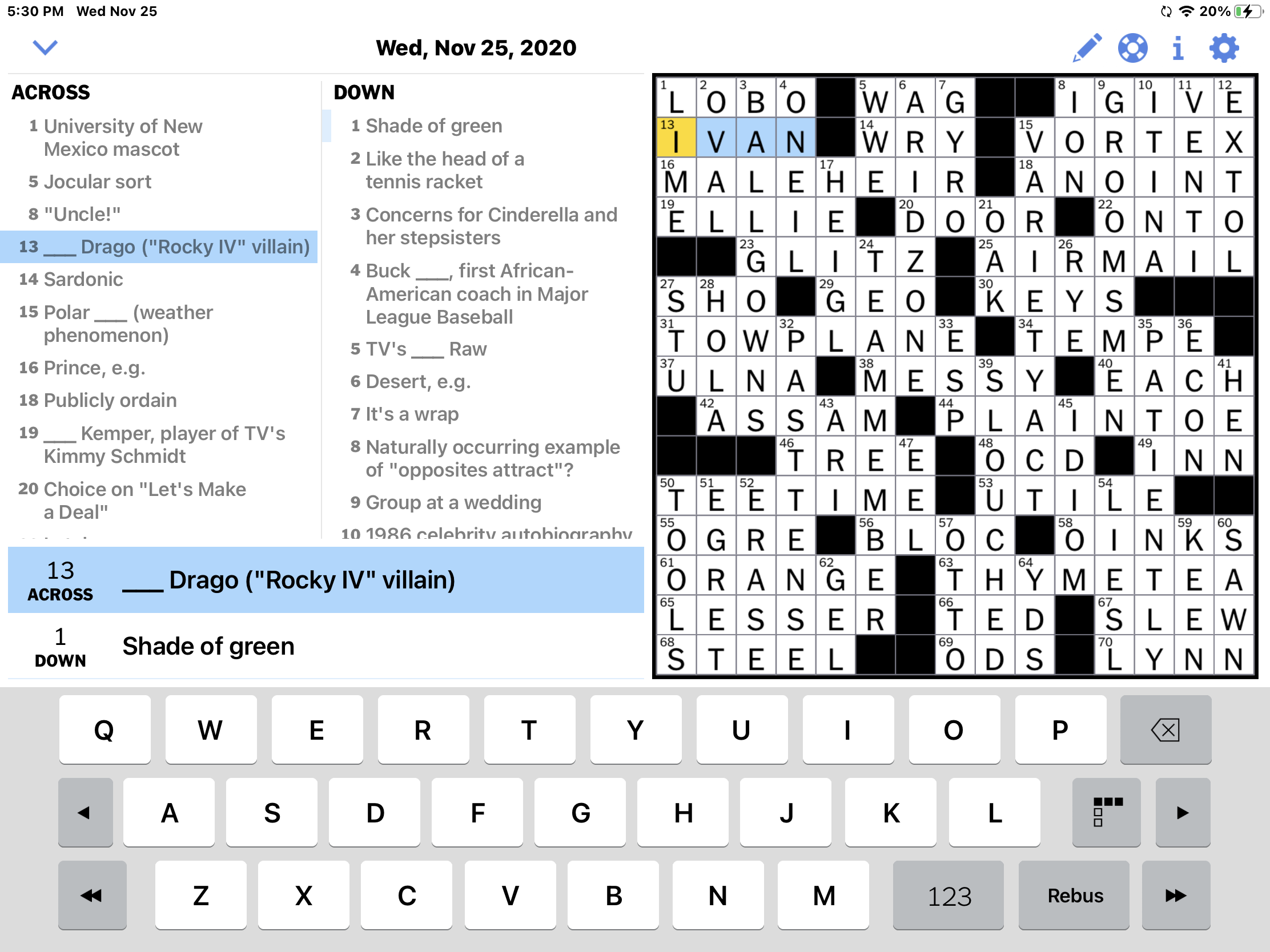 THIS HAPPENS ALL THE TIME TO ME.