The other night I was privileged to drop in to Barnes & Noble to a book signing by a former student, Blue Cole.

Blue, who is actually the son of a high school classmate, was one of those charming, good-looking teenagers who you feared might amount to nothing.  Dimples and blue eyes will only get you so far, after all.

However, Blue has grown up to be a fine upstanding citizen who is only a little worrisome when his wife takes him to big box stores and leaves him unattended.  This novel, Evil Upriver, is Blue’s third, unless I’ve lost count.

But Dale, I hear you musing, supernatural horror is not your thing.  You even write about it in the chapter on AUDIENCE in your own upcoming book, Lichtenbergianism: procrastination as a creative strategy.  Indeed it is not, but 1) I go to book signings for all former students; and 2) Blue personally invited me to come and asked me to wear my pearl earring, since that’s what the bartender named Lyles in the book wears.

How could I not invent a cocktail and take him a small box with said cocktail and other mini-bar accoutrements?

Actually, I was going to bring him the Smoky Topaz, which should be good enough for any normal purpose, but then my Lovely First Wife suggested that I invent a cocktail called The Afterlife because reasons.

The idea was that it would be at first taste an interesting take on the Manhattan with a somewhat toasty finish (GET IT, KENNETH?), but however, and also too, I felt it was lacking.

So tonight, I futzed with it and now it’s pretty solid: 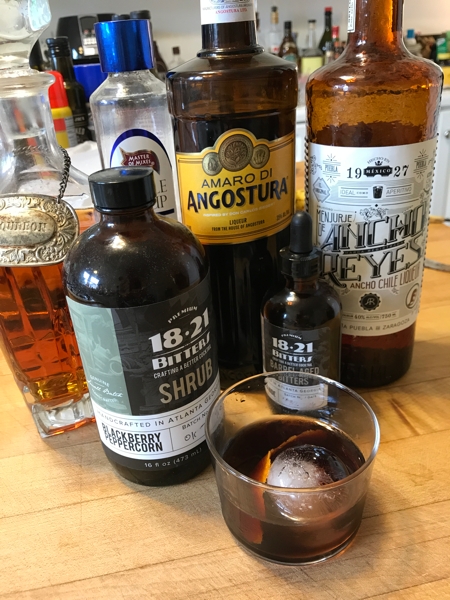 Stir with ice, strain, serve on the rocks with an orange peel.

Rather more ingredients than I normally prefer, but it’s tasty. Quite tasty.

(Sorry, Blue, about the recipe I gave you last night.  Feel free to use it, but this is the recipe that will appear in my second book.)