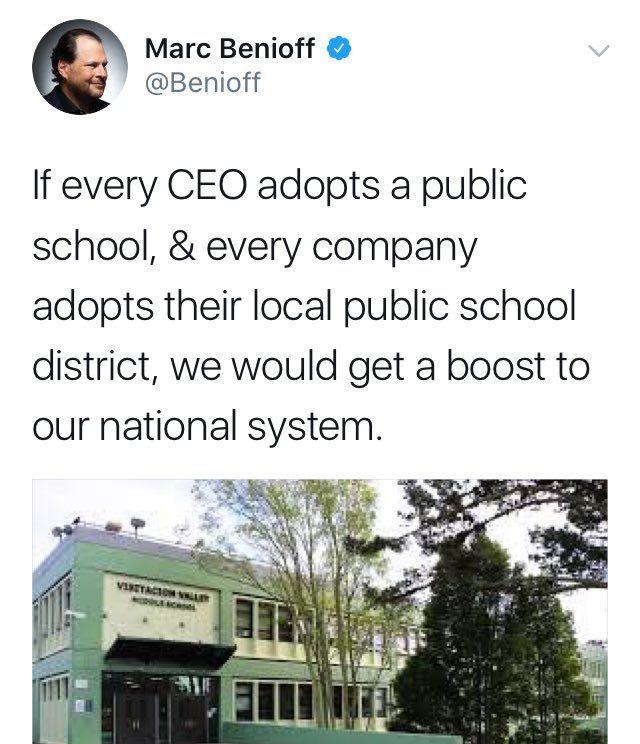 Technically it was a screen-captured image of the original tweet retweeted by Gary Bernhardt which was then ‘liked’ by Akilah Hughes, whom I do follow.  Twitter can be complicated. Gary Bernhardt’s added comment was:

Yes, we could call it “taxes.”

And there you have the Great Divide in a nutshell: those who understand what the social contract means and those who are oblivious to the idea that if we all pull together then we all will survive.

Three thoughts about this:

This is the same mindset that produces the whole conservative “Why should I pay for pregnancy expenses in my insurance if I’m a man?” shibboleth.  BECAUSE THAT’S HOW INSURANCE WORKS, KENNETH. The idea that we as a society are better off if we all chip in to provide a structure of support for all us—roads, schools, public safety, health care—is alien to these people.  I hesitate to attribute motives to them, but to me the whole thing smacks of sociopathy, and there’s a reason why.[1]

Years ago I was at the State STAR Student banquet (I am the chair of the selection committee), and the speaker for the evening was someone from the business community.  The man stood at the podium and lectured a room full of educators that if we were able to ratchet up “the graduation rate in Georgia to [some number I’ve forgotten], it would add an extra [some number in the millions] to our state’s economy.” What I heard—and what every educator in the room heard—was that it would be worth it to the business community to hand over a huge sum of money to the schools to make that happen, but of course that’s not what the business leader meant at all.  He meant that we should hop to it and test the children harder until they graduated more betterer.  Again, the idea that all of society had a stake in the education of all of society’s children simply never occurred to him.

These days the hummingbirds are fattening up for their flight to Mexico, and we have provided them with a feeder to assist them in their efforts. We actually provide two, one in the herb garden and one on the back porch, and our neighbor has one of her own, so that’s three feeders with four little flower outlets each.  Twelve little sipping stations, which should be more than enough for the six or eight hummingbirds residing in the hedge.  But hummingbirds are little assholes, and each feeder is dominated by one bully hummingbird who spends most of his time chasing away the other guys.  I watched one of the little buggers defend an empty feeder for a day (before I realized it was empty and refilled it).

To them, the feeders are a zero-sum game.  Chase everyone else away and you have All The Nectars for yourself.  To be fair, they’re birds, and there’s a reason we have the insult “bird brain,” but it’s instructive that birds do not rule the world: mammals do, and it’s largely because we evolved the capacity for empathy and altruism.

I do not understand why this truth, genetically implanted in us, eludes the conservative brain.[2]

[1] Go read the article at that link.  It’s disturbing, and I didn’t know any of it until I went looking for a satirical take on conservatives’ lack of social consciousness about health insurance.

[2] Actually, I do know why: the conservative brain is hardwired to operate through fear.  I have repeatedly referred to them on this blog as “amygdala-based lifeforms.”  See here, here, and here.

2 thoughts on “Social contract? Pffft. Not worth the paper it’s written on.”