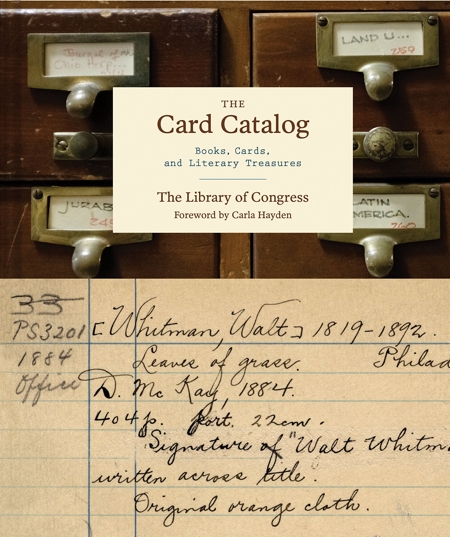 It is lovely: the Walt Whitman catalog card you see across the bottom of the cover is actually a paper wraparound, and it has an honest-to-Melvil-Dewey library card checkout pocket in front!  It is full of images of fascinating books and their catalog cards throughout, and is beautifully laid out on quality paper.

I wish I could say it was the sheer physical experience I’d always dreamed of, but alas, the book is a bit of a dud in bed.  It starts at the dawn of recorded history with Sumerians and their cuneiform tablets, and there was a lot about Melvil Dewey’s empire building I didn’t know, and the impact of the LOC’s cataloging efforts on public/school/university libraries across the nation is not underestimated, but let’s face it: the world of librarians and their cataloging preferences isn’t exactly Silicon Valley.  My biggest complaint about the book, though, was not its lack of sexiness, but its failure to cater to us catalog card porn junkies in any way.

As I said, it is chock full of pictures of famous books and their catalog cards—overfull in fact.  Three-quarters of the book is taken up with these allurements, and yet they are presented without comment or context.  Were these books special acquisitions?  Do they represent one of the phases of the development of the catalog?  What is their place in American lit/publishing?

However, that’s not what I’m writing about today.  On p. 118, in the chapter about the LOC’s card service, which printed and sold catalog cards for every book published to any library—mine included—there was this sentence: “The card service lasted nearly a century, with the last cards produced and distributed in 1997.”

And then I realized: that was the year I was offered the job of assistant program director for instruction of the Governor’s Honors Program.  I was given the chance to structure and mold the life-changing experience to 700 gifted/talented high school students every summer, which I did through the summer of 2009, followed by a three-summer stint as the actual director of GHP.

Time is a wormhole.