Our travels with Rahelio were just our first encounter with the Hippie Woo of Sedona.  Today we waded toward the deep end.

First we had shopping to do.  A friend with pronounced woo proclivities had asked me to bring him a fish fetish for his personal use.  No, get your mind out of the gutter, you pervert.  These are small stone animals carved by the Zuni, who use them in ceremonies.  Nowadays they also carve them for the tourist trade and for collectors, and you can find them in most of the shops around here.

As you can imagine, they range from the clumsily made to works of art, with prices to match.  My problem was that although you can readily find bears and toads and lizards and such, fish are a rarity.  I found one, but it did not speak to me, so I continued my search.

After a couple of shops failed to provide, I asked one proprietor where the best place to look might be.  Garland’s, she said, and gave us directions.

That was our first stop this morning, and my, what a lovely store.  Not really for the tourist trade, it was filled with beautiful Native American art, including some really stunning fetishes.  (However, a brontosaurus? Really?) 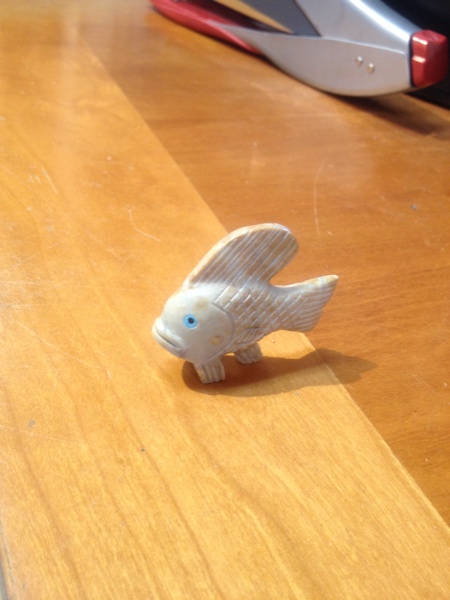 We got back on the road, and THERE IT WAS— 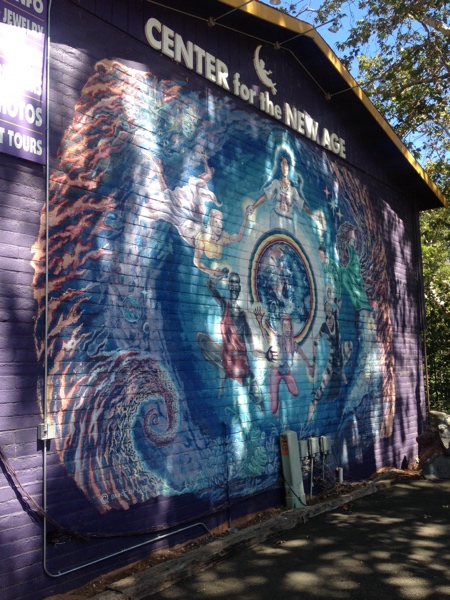 — THE CENTER FOR THE NEW AGE.  This place is chock full of woo: crystals, pendants, Wiccan equipment, books, tarot decks, and a full staff of psychics, no appointment needed.

Here’s the meditation pyramid in the parking lot: 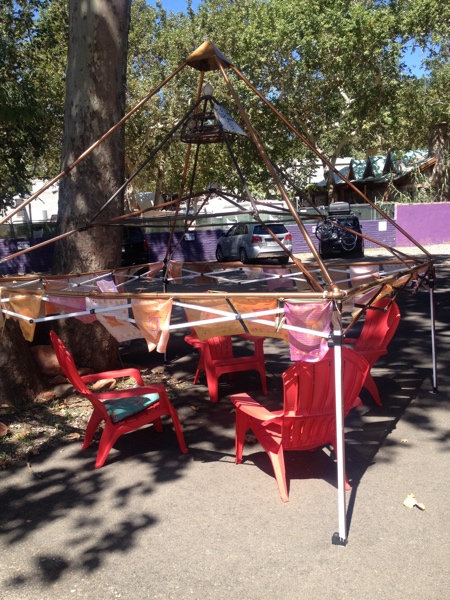 We went in.  Amidst all the merchandise (and MF was correct in feeling that the atmosphere was oppressive—all that quartz can get to you) the only thing that really spoke to me was a small bumper sticker that says FAIL UNTIL YOU SUCCEED.  Since this is a precept of Lichtenbergianism (coming to an online bookstore near you, some day), I bought it.

But we were there to Do the Woo™, so I went up to the desk and booked a chakra balancing for my Lovely First Wife and me.

When we first arrived in Sedona and were mapping out our stay, I had called the Center seeking more information about their services, but the concierge (no, really) said that each psychic had their own process—and of course they were all gifted and competent.  We would choose our psychic from their bios, using our intuition.  Of course.

We had a choice then of two gentlemen who were present and standing by, and we both were guided by our intuition to choose the younger, better-looking guy.  His name is Eyea.1

We elected to go in together and thus be present for each other’s chakra balancing, which was fine, he said, but cautioned us about keeping our energy “small” so as not to interfere with the other’s balancing.

Here is how Eyea balances your chakras.2  You lie down on a massage table, face up, shoes off, eyes closed.  He asks your permission to touch you during the process, which might be weird but wasn’t.  He stands at your feet and begins by holding his hands near them, sensing your energy flow through your root chakra.  He then works his way up your chakra system, placing one hand on your arm or shoulder while with the other receiving/sending energy with his uplifted/downturned palm.

After he gets to your crown chakra, he works his way back down and ends up by “smoothing” out all the energy.  He asks you to take five deep breaths, then three, then one, and then invites you back to this world.

He placed a large quartz crystal under each of our hands, mine midway through the process, the LFW at the very start.  He used an amethyst crystal at some point during her balancing; no clue about mine.

After we were both balanced, he gave us advice for improving our chakra issues, which I will not detail here except to say that it involved a direct contact with substances the same color as the problematic chakra.  Complete and utter woo!  Yay!

After the trip is over, I will return to this experience with a model for how different personalities approach a woo experience like this one.  Stay tuned.  It’s a world-changing concept.

We ate a quick lunch and rushed to our next woo appointment, a 3-hour massage package.  What’s so woo about that, you ask?  All of us got a regular massage and a facial, but two of us got an Ayurvedic massage, and the other two got an acupuncture session.

The Ayurvedic massage was massive amounts of warm oil, liberally applied and massaged into the skin, which was supposed to soak up whatever herbs and spices that had been infused therein.  This is supposed to stimulate our lymph systems and increase circulation.

Acupuncture, of course, is the Chinese practice of sticking needles into specific points in the body in order to break up blockages of “chi” energy along the meridians along which it flows.

So, while both are probably beneficial to some people sometimes in some way, they are both essentially woo-tastic.

Next stop, the Cathedral Rock vortex, from where one of our company had promised to bring some soil back for a wooist friend: 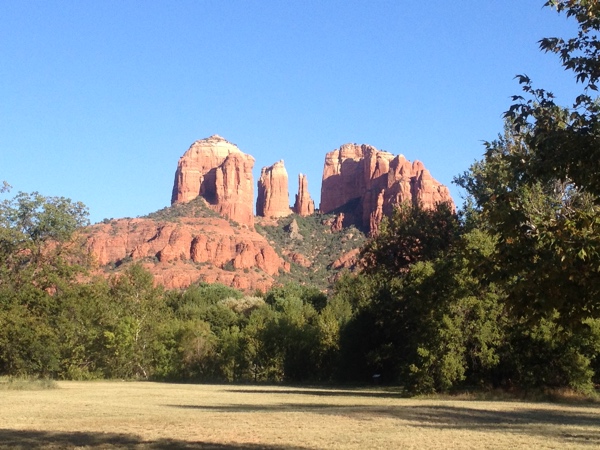 You approach this vortex, which is at the base of the rock, via a National Park, a very small park which is surrounded by a National Forest.  We followed the path along Oak Creek—the vortex is said to be where the water is closest to the rock.

Soon, the woo began to manifest: 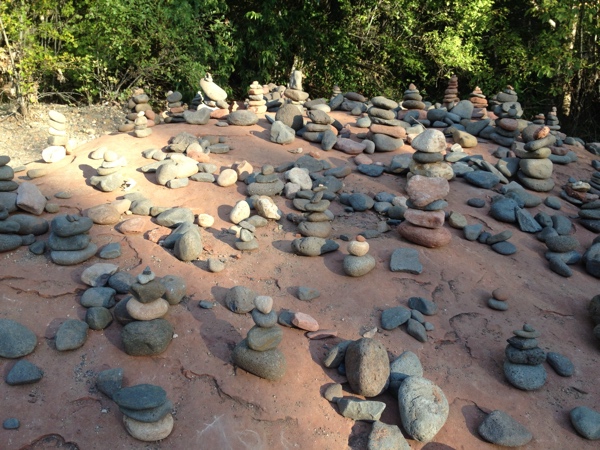 All the hippies have stacked rocks.  Everywhere. 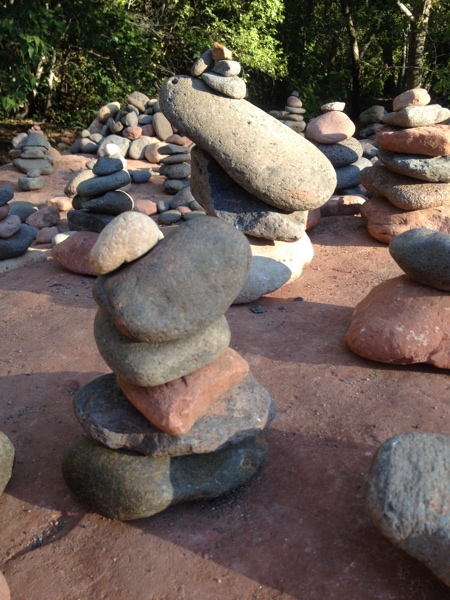 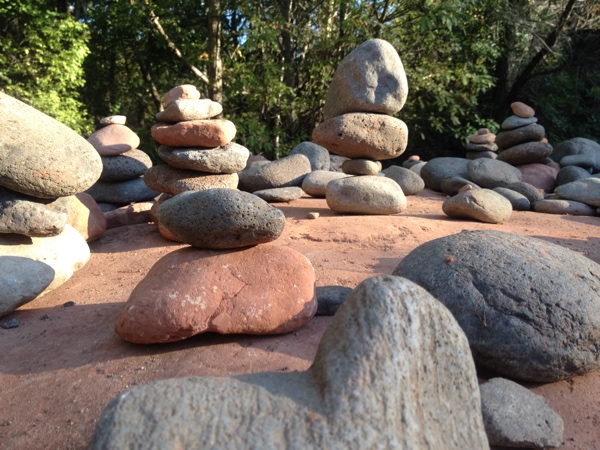 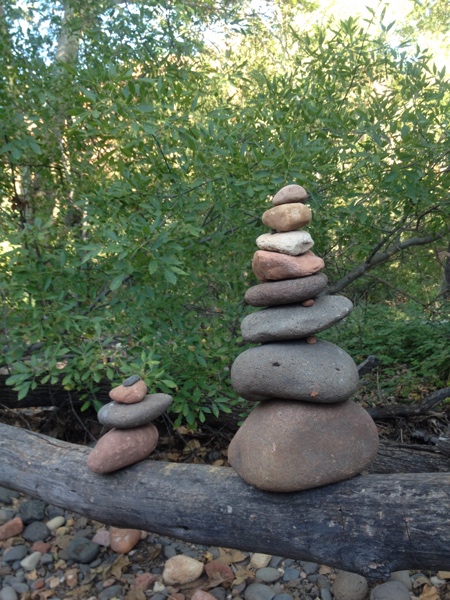 When in Sedona, of course…

I was not inclined to take the time to do a full stack, but I saw a rock that looked like it needed to be balanced.  I picked it up and started feeling its balance on a larger stone, explaining to the company, “In this documentary on this guy who does this, he says that every rock has somewhere on it a tripod of points that..” 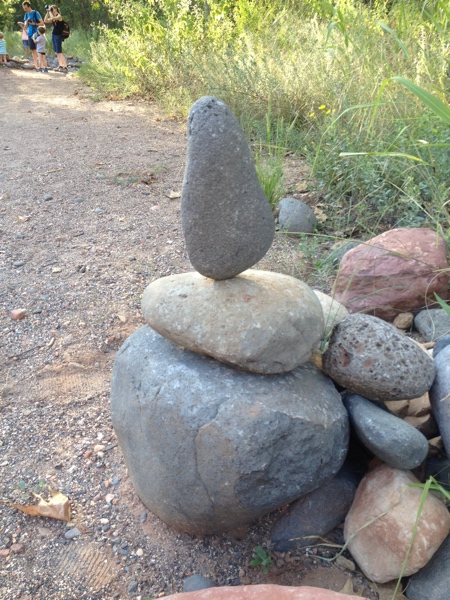 Here it is in its natural habitat: 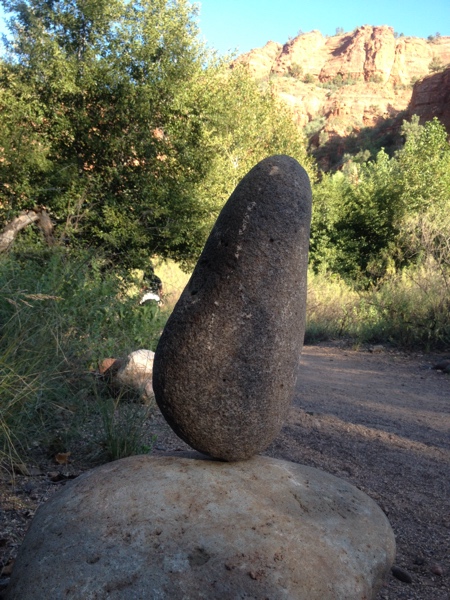 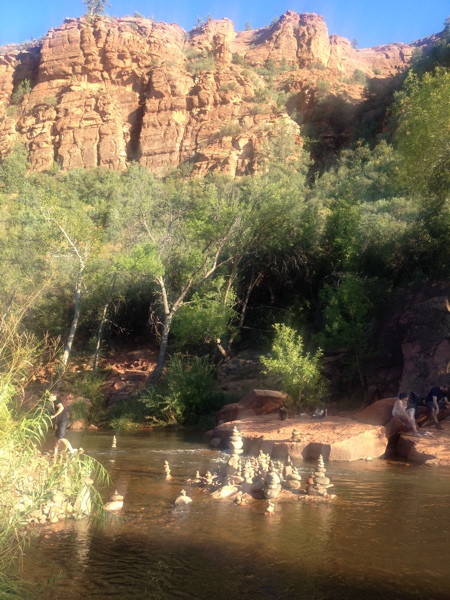 Finally we arrived at our destination, or at least as far as we were willing to go.

Having been trained by Rahelio, we set about our individual approaches to being there.  Again, I draw the veil over those experiences. 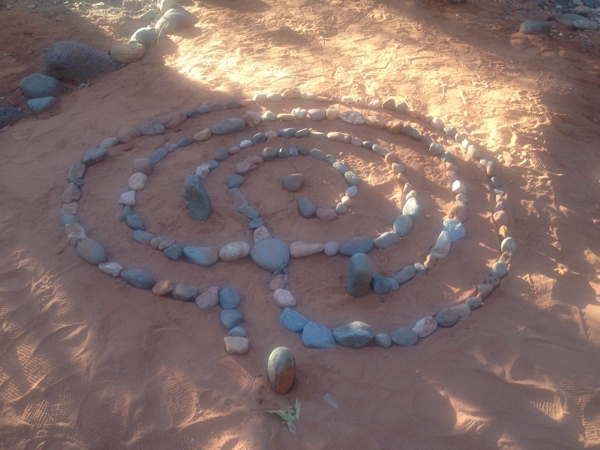 I don’t really have a bucket list, but if I did, “build a labyrinth at a spiritual vortex” would be on it.  I traced it in the soil and then enlisted the help of the group in outlining it. 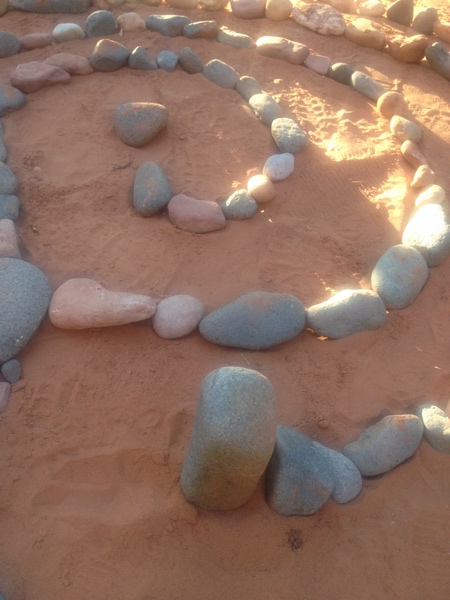 Everyone else began the return hike, but I stayed and meditated a little longer on my own before catching up with them. 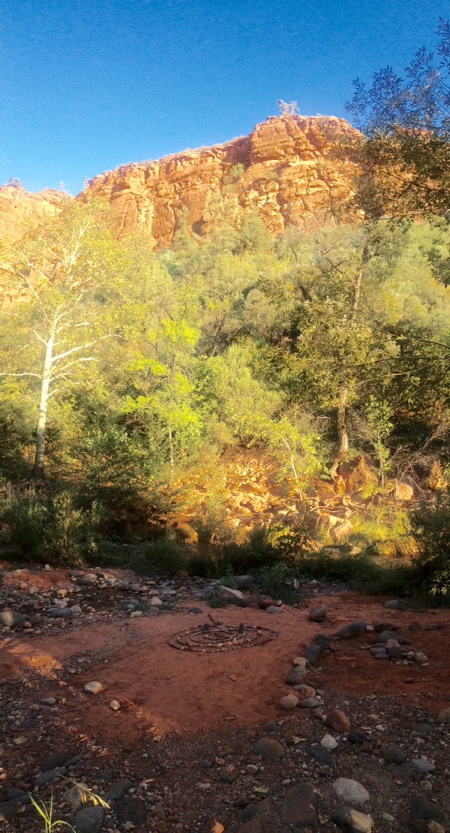 We stopped at one point to sit by the creek and let those who wanted to dabble their feet in the water.  The sun was definitely beginning to set at this point. 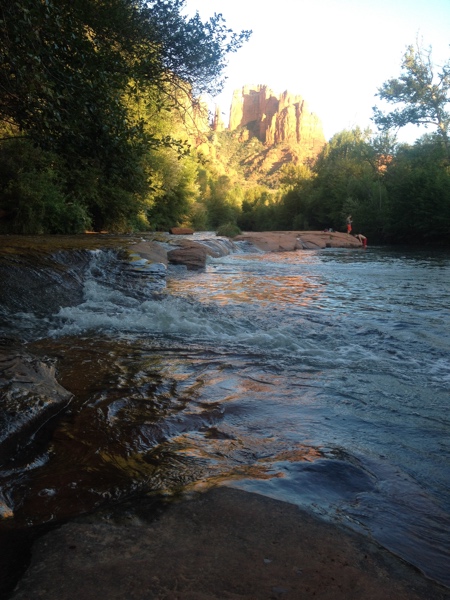 You can see two young men swimming there.  I actually expected to see naked hippies in the creek, but apparently there are limits to woo-ing it up in public.

We began our drive back into town, but had to stop to catch this shot: 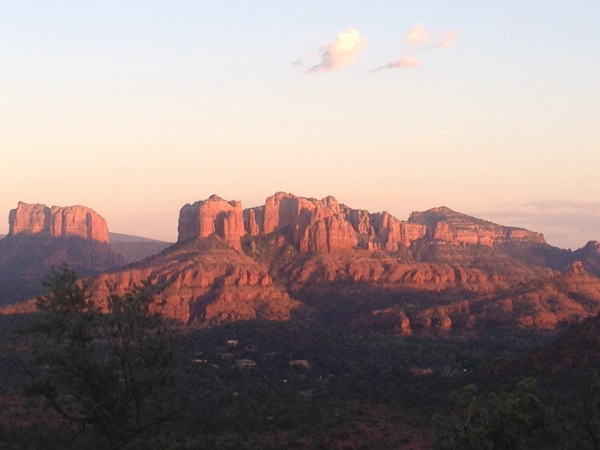 Back to the hotel, clean up—that Ayurvedic oil really leaves your hair looking like Snape, or in MF’s case, the Bird Woman from Mary Poppins—and out to one last meal, at the Oak Creek Brewery, where the food was fine but the bartender sneered at me when I asked if they stocked yellow Chartreuse.  How on earth can they make a Molly 22 or a Bartender on Acid?  I settled for a Manhattan, resisting the urge to ask him if he stocked sweet vermouth and rye.

By the way, Sedona also has elks. 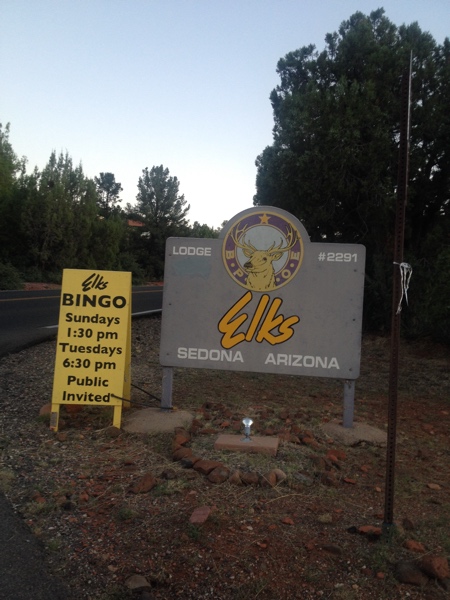 One more day, then back to real life.

1 This is pronouned EE-YAY.  Of course.