Uptown Sedona is basically two streets or so lined with shops that vie with each other in their offerings of a) Native American art; b) Native American jewelry; c) tourist stuff; d) trendy clothing; e) variously themed foods; and of course f) HIPPIE WOO!

You can buy crystals/gemstones, both little tumble/polished numbers and more elegant and mysterious items like spheres and pointers and angels in a dizzying variety of materials.  There were minerals/gems I had never heard of, and in the better shops they’d be labeled with their attributes.

As far as I’m concerned, here’s the deal with crystals—and indeed with all hippie woo: while I cannot believe that the rocks are efficacious in any way in themselves, they certainly can provide a focus for your thoughts and meditations.  So do I believe that howlite can “absorb anger, teach patience, and strengthen teeth and bones“?  Not at all.  But if you need to work on your patience, then having a howlite stone in your pocket or on your desk can certainly help remind you of your goal.

If you follow that link in the previous paragraph and end up going down the rabbit hole of all the pretty rocks, you will notice that each stone has some really woo-tastic attributes—angels, auras, past lives, all that kind of thing.  This is to be taken seriously here in Sedona, because all these shops selling crystals also each have at least one psychic onstaff.  You can get your aura photographed and read (with a 23-page report in one instance); tarot readings; chakras cleansed/balanced/aligned; palms read; and more.  It is a veritable smorgasbord.

Here is one purchase I made: 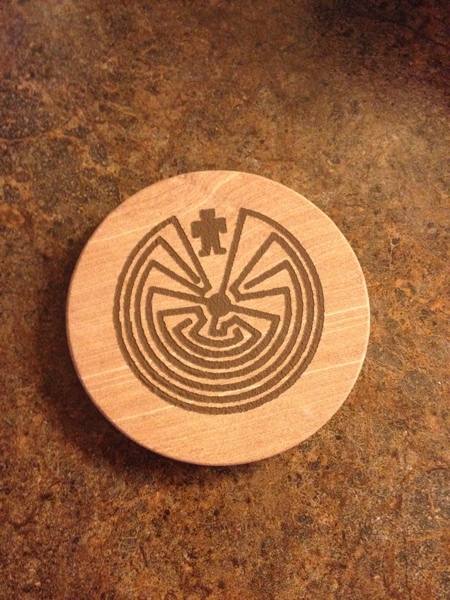 It’s a sandstone coaster made here in Arizona (I bought four), and the design is the Navajo “Man in the Maze.”  It derives from a basket design, and it is the only example of the labyrinth in North America. The weird shape of it was dictated by the necessities of weaving, but it’s the classic 7 circuit pattern that resides in my own back yard.

It is worth noting that Sedona has an extremely split personality.  On the one hand, its major industry is serving the international Hippie Woo population.  On the other, it is a retirement community for very well-to-do white people.  There is no nightlife.  Only restaurants are open past 9:30 p.m., and from our lofty perch at the Sky Ranch Lodge, we can watch the traffic on highway 89A dwindle to nothing.

You can especially see this in West Sedona, which is what we see from our lofty perch.  Whole Foods, upscale shops, etc.: it is basically Lovely East Cobb.  When we went in search of some of the more notable woo shops in the area, some of us had high hopes for a “gypsy style” clothing store attached to one of the crystal shops, but the clothing was not for hippies at all.  One would  not wear a sophisticated linen top with cute slacks to Burning Man, would one?

The main attraction of Sedona’s woo is, of course, the vortexes.1

When we first started planning this trip, a vortex experience was at the top of our list of wooish things to do, and so I went online and found Rahelio.  Rahelio is a gentle, good-looking Native American shaman, and he takes seekers such as ourselves on three-hour experiences.  I do recommend him.  We were discussing this morning how we expect the bigger tour groups might just take you in a jeep or a bus to see the vortexes, but Rahelio guides you into ways to encounter them through your own spiritual set.

If you go researching the vortexes, you will find that Sedona is just lousy with them and with “power places,” all of them arranged rather tidily in complex geometric patterns.  We went to two, one in the Oak Creek Canyon next to a rushing stream, and one that is actually next to the Sky Ranch Lodge, up on one of the red rocks.

As is my usual custom, I’m not going into detail about what we experienced, but a lovely time was had by all.  Rahelio guided us through the water/Earth Mother experience, and then through the wind/Sky Father.

I didn’t take photos, largely, but here are a couple: 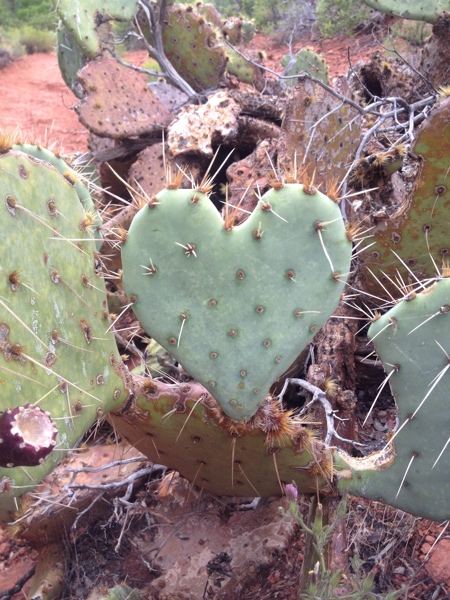 This was on the way up to our second vortex and we couldn’t resist recording the moment.  Rahelio, who was very quick with metaphor and analogy, quipped that it was a perfect model for love.

Marc and MF atop the mountain: 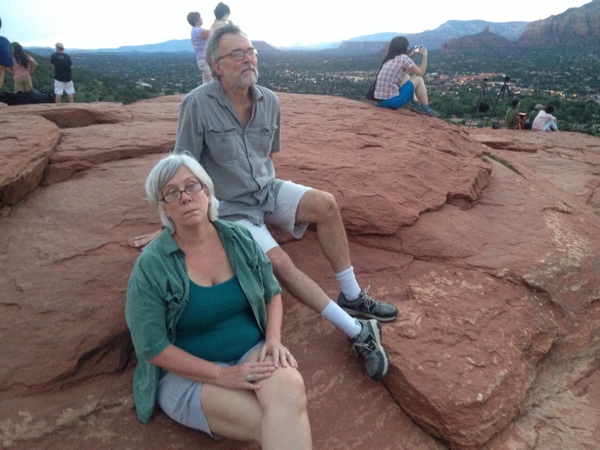 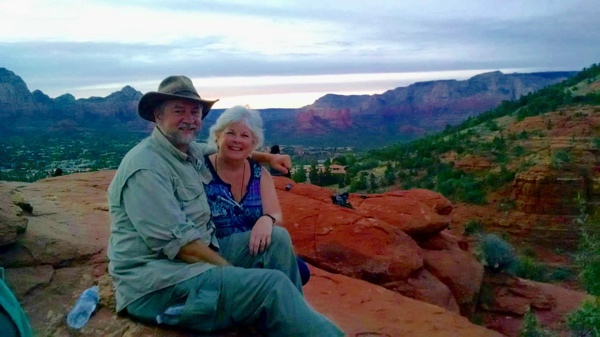 A panorama from atop the mountain:

(We did not do our sky ceremony on top—lots of noisy people up there—but on a lower promontory that was still pretty high up and glorious.)

I will share one part of my personal experience.  I am almost completely hopeless when it comes to guided imagery, so while we reclined on the rock and Rahelio was talking us through the journey, I just allowed myself to float along and experience whatever happened.  Little of what he asked us to visualize came to me; I am, as I said, completely hopeless.

However, as I began to emerge from my meditation/journey/(nap?), I got a very clear image and a very clear instruction: “Take a piece of charcoal.”  I mean to say, wot?

First of all, I thought, there won’t be any charcoal up here because no one lights fires up here.  Second of all, what are the ethics of taking stuff off the mountain?

So after everyone else talked about what they had seen—and Rahelio offered interpretations for them—I mentioned the command to find a piece of charcoal.  He explained that sometimes there are fires up here because of lightning strikes, so it wasn’t impossible.

I looked about and there seemed to be small dark pieces of something, but I wasn’t sure whether they were rock or wood, and just weathered wood at that.  As we got up to move on to the top of the mountain, though, I saw a small, absolutely black piece of charcoal.  I picked it up, and it broke into three equal pieces: 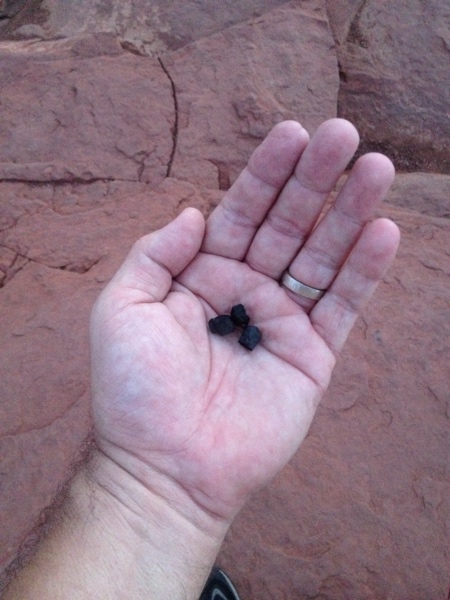 I have clue why or what.  Rahelio made some mention of lighting “the fire of my dreams.”  Whatever that might be…  At any rate, they’re safely stowed with my stuff and will come home with me for further meditation.  As we often say around here, more work is required.

We had met Rahelio at the Whole Foods, where another couple had joined us in his vehicle.  He dropped us off there, and we decided to create our own small repast rather than going out to gorge ourselves as is our wont.  We promptly met a couple who, hearing our southern accents, astoundingly identified the “southwest of Atlanta” place we were from as Newnan.  She has cousins there—whom we know, of course—and they know north Georgia quite well.

1 Yes, “vortexes,” not “vertices.”  There is no more rational explanation for this aberration than for the concept itself.