We began our last day of the trip by heading south of Sedona to the Chapel of the Holy Cross. As you can read if you click on the link, it was the inspiration of a sculptor back in the 30s after she watched the Empire State Building being built.  Her vision wasn’t realized until 1957: 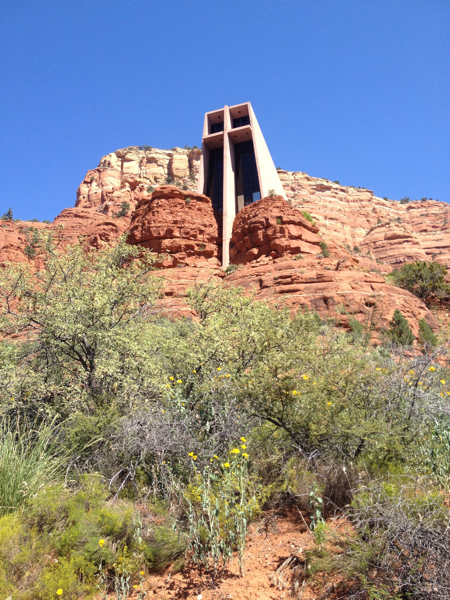 The setting is spectacular, of course, and the chapel itself is imposing in a stark 1950s Brutalist way.  After you climb the long and curving road up there, the plaza is no less imposing: 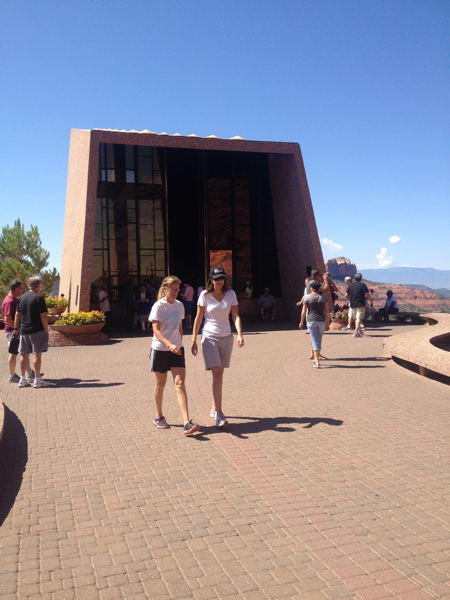 And the interior is no less stark: 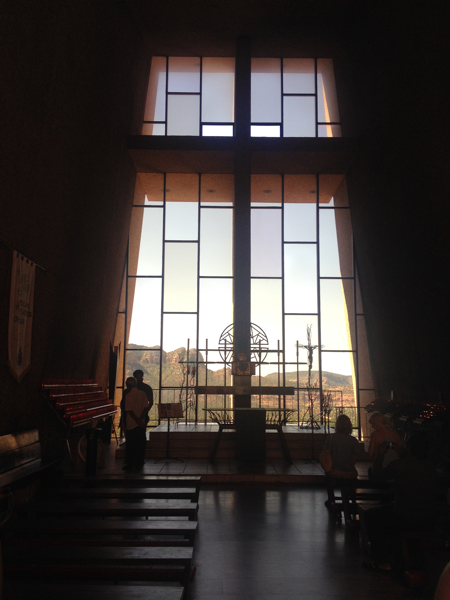 It is an actual Roman Catholic chapel, though no services are held there other than prayers at 5:00 and a Taizé service on Monday nights.  There’s a gift shop—of course—in the basement.

All in all, I found its surroundings more impressive: 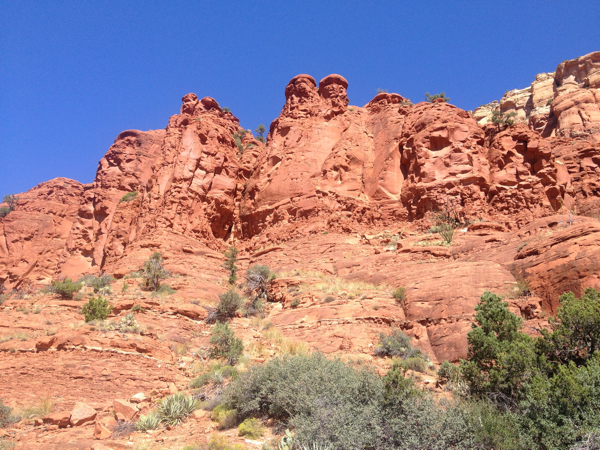 Surprisingly, the valley below is mostly neighborhoods, so the view is rather spoiled.  The chapel was constructed around the same time as Disney Land and made the same tactical error in not buying up all the property in sight (literally), a mistake Uncle Walt did not repeat in Orlando.

Mostly the homes in the area are lovely, traditional adobe structures, albeit a bit more lavish than perhaps the original dwellers lived in: 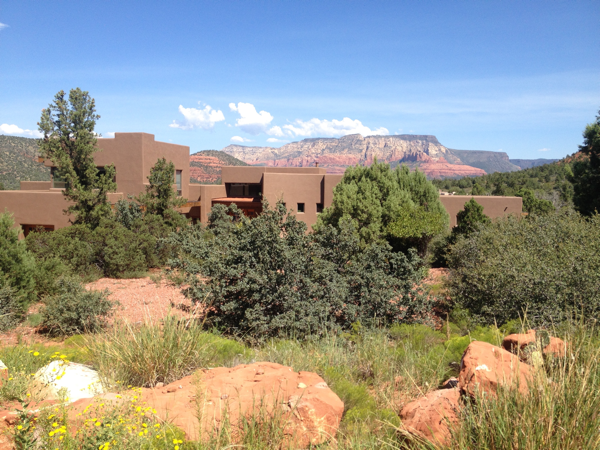 Except for this guy:

This is right below the chapel, and I encourage you to click on the photo for more detail.  You have to drive by this thing to get to the chapel, and there are all kinds of signs warning you not to stop or park.  Take the time to soak in all the components of this person’s home.  N.B.: You cannot see the swimming pool, the pool house(s), nor the observatory from this angle.

From the chapel, we drove back to Sedona and stopped so that some of us could wallow in further woo, getting their actual auras photographed and read (yes, including the 23-page report), and getting counseled on which crystals would help with the subsequently diagnosed issues.1

I, on the other hand, checked my bank account with trepidation and was rather startled to see that I had a lot more money than I thought, so I bought a funky t-shirt that I had seen previously to wear at  Alchemy.  I won’t bother to post that here.

Time to hit the road back to Phoenix, via Jerome.  Jerome was a mining town, mostly copper, and it was the most prolific copper mine in the nation for a long time.  When the copper finally ran out, the town nearly died.  As fate would have it, the hippies discovered  it and moved in, snapping up property for dirt cheap and mostly renovating it.  They also brought an artsy sensibility to the place, and now it is one of the weirdest destinations you can imagine.  Feel free to click on the link and explore; I didn’t take many photographs.

The town is vertiginous in the extreme, never designed for traffic, and we ended up parking in a lot carved out of the lip of the old mine above town: 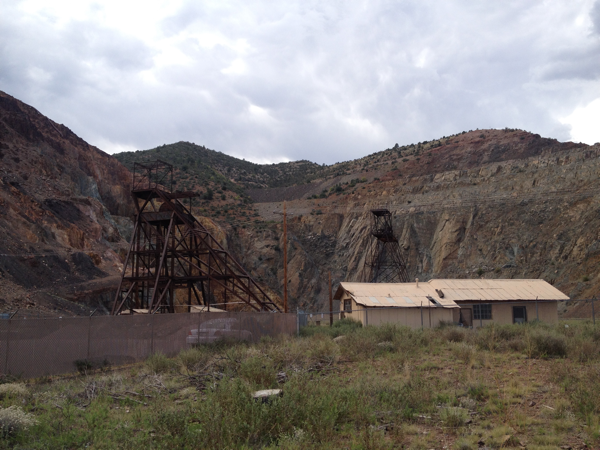 There seem to be three different kinds of shops there: art galleries, restaurants, and ghost/spooky things.  (Part of its renaissance was promoting itself as the ultimate ghost town.)

Of course, one of its main attractions is the view: 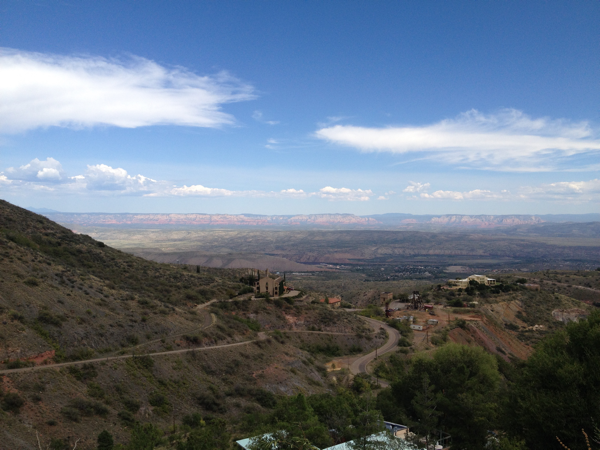 It overlooks the Verde Valley, and boy does it overlook!  We all decided that we could not live there.  It would be like being a bighorn sheep.

We cautiously retraced our steps to the valley and headed to the Interstate.  It is possible to get to Phoenix by continuing along state highway 89A up through Jerome and on to Prescott, but as one biker t-shirt in a shop window said, “I survived 89A: 158 curves in 12 miles!”  When you remember that those curves are along sheer cliffs, the easy answer is “Nope to the nope!”

We hit I-17 heading towards Phoenix around 4:00.  Since our flight didn’t leave until almost midnight, we had plenty of time to kill.  My Lovely First Wife dragged out her books—we never go anywhere without at least three books on what to do when we get there—and suggested we get off the highway to see the Montezuma Castle National Monument.  She has a not-so-secret desire to be an archaeologist, and this looked right up her alley.

We arrived at 4:25—the park closed at 5:00.  The pert young ranger behind the desk in the visitor’s center assured us we had time to go look at and comprehend the ruins. 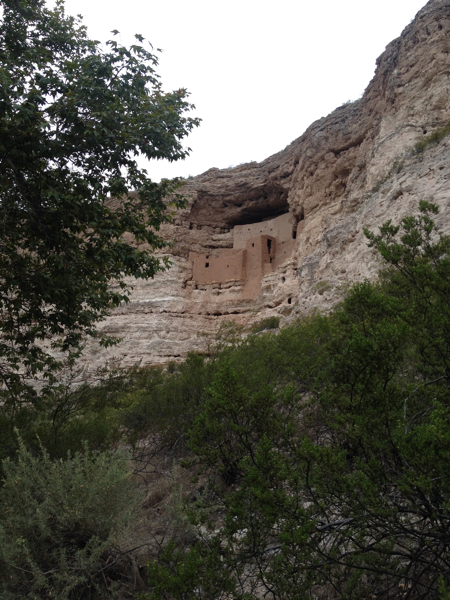 This is the ruins of a five-story pueblo built long before Montezuma lived.  The name comes from wishful thinking on the part of Spanish explorers.

This is what remains of a much larger settlement, both along these cliffs and elsewhere across the area. 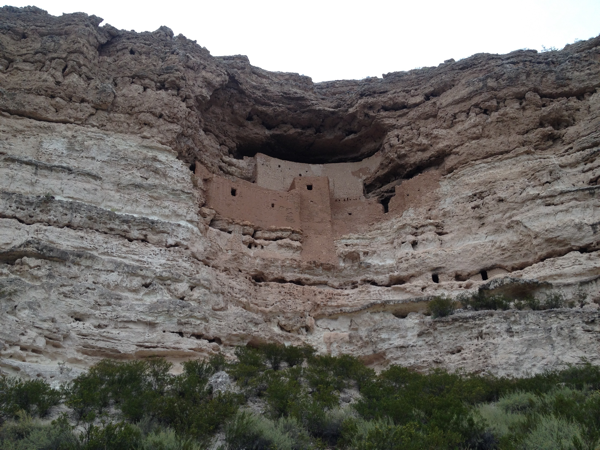 The National Park Service has done a phenomenal job of explaining what you’re looking at, with little poster/signs all along the trail. 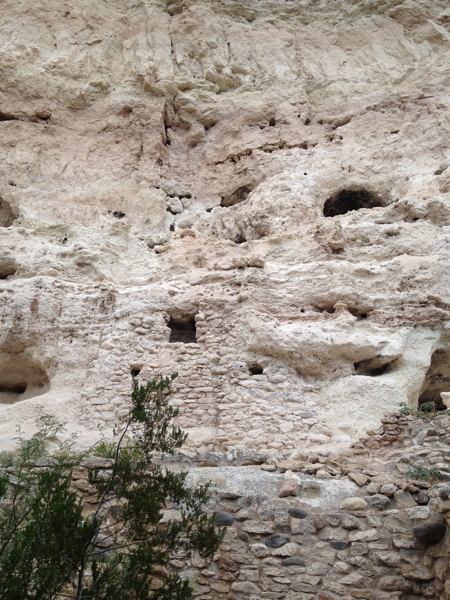 For example, here are the ruins of Castle A, next door to the main structure.  Again, five stories, starting at ground level.  You can see the holes for the upper level beams.

There were also markers for all the plants in the area which the residents used for food, cloth, medicine, etc., which I appreciated knowing.  At the foot of these cliffs is Beaver Creek, which is where they farmed corn and other crops, plus hunted and gathered.  Like most waterways in Arizona, Beaver Creek can flood quickly and ferociously, so it made sense for the residents to built high and dry.

As usual, the LFW was right in her instincts about what to do.

Onward to Phoenix, back through the rather unattractive landscape which surrounds it.

There were still moments: 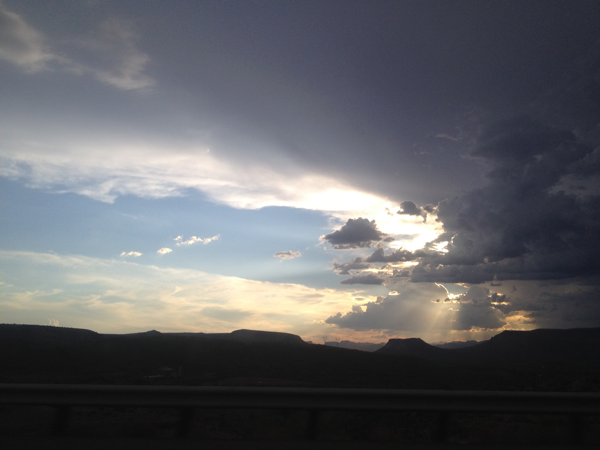 On the whole, though, Phoenix is not pretty.  We made it back to the car rental place and to the terminal and our gate long before boarding, so we tried to sleep a bit.  We took off at midnight MDT and landed at 6:30 EDT, driving back to Newnan and home.

I may be the only one awake at this point, since I was the only one who could actually sleep through the entire flight.

I’ve been rather insistently welcomed back: 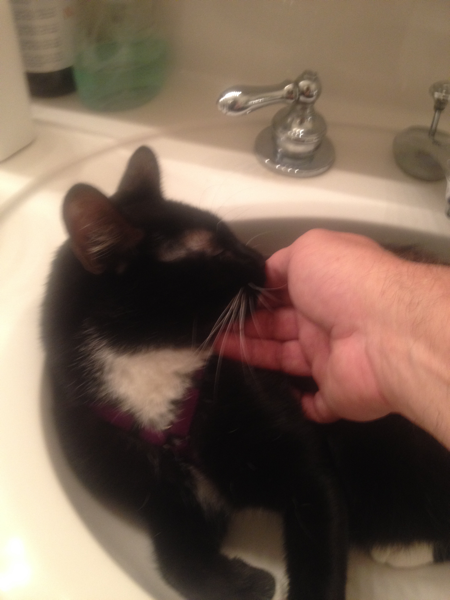 All in all, a phenomenal trip.  I’ll do three more posts on the trip: 1) a summary of tips and suggestions for anyone making a similar trip; 2) some of the swag I brought home; and 3) my paradigm-shattering model for personality-based woo encounters.

1 I feel rather certain that Marc would want me to put in the disclaimer that none of this was him.