We began our day with a sun-dog, always a pleasure. 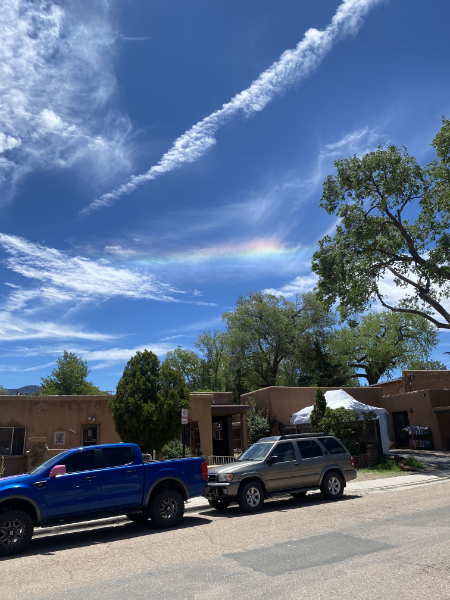 After a leisurely breakfast at Henry & the Fish coffee shop/bakery, we were on our way to Canyon Road, the heart of gallery art here in Santa Fe. We parked at the east end and walked all the way down to the Teahouse, where we had lunch.

In between we stopped at most of the galleries on the way. So many beautiful things in that half-mile stretch, but none of them claimed my attention the way the Thomas Hamann piece did in New Orleans. (There are some ideas that I’m STEALING FROM THE BEST for my own purposes…)

There was one piece that struck me, part of an exhibit at the Historic Santa Fe Foundation, by artist-in-residence Julia Tait Dickenson. We almost didn’t go in, because we all know how Hysterical Societies can be, but it was staffed by a lovely volunteer and the exhibit was a knockout: Dickenson makes brooms using natural materials, with found objects for the handles.

Don’t raise those eyebrows; these things were gorgeous, a challenge to regard every object you come across in your daily life as a similarly potential handle.

This one spoke to me: 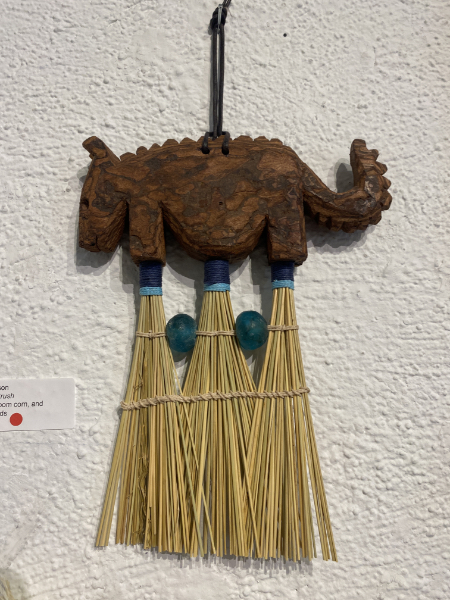 It is an Dogon folk carving with glass beads. I needed this to hang on the wall in the playroom with all my other labyrinth-oriented artwork. But if you see that little red dot on the card, you will know that the broom had already been sold. Why I didn’t see it to begin with is beyond me, but I was doomed to disappointment when we stopped back by to buy it on the way back to the car.

Oh well, it’s not as if we’re not heading to an International Folk Art Market in the morning. Also, I got the artist’s contact info and will see if she has a similar piece for me.

After a quick nap back at the hotel, we headed to our major event for the day: Meow Wolf.

Oh my. We have been to Santa Fe multiple times but somehow never made it to this astounding installation. This trip I was determined that we would do the thing.

And it is a thing.

I am not going to attempt to describe it to you other than to say it is mind-blowing. A group of artists has taken a building and converted it into a labyrinthine fun-house of surreal multiple realities.

Here’s a picture of us getting lost before we even started. (We headed down the hall to the bathrooms instead of entering the exhibit itself.) 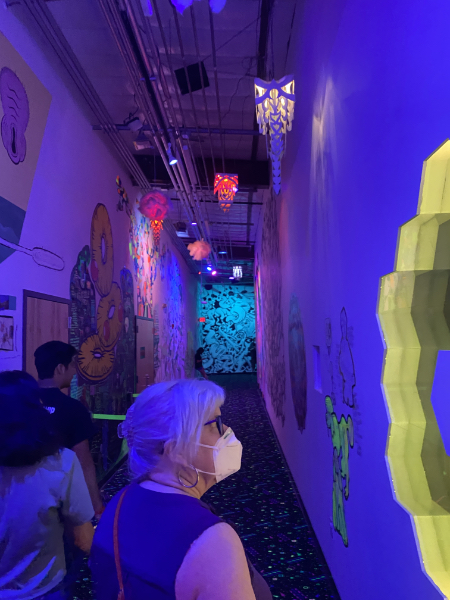 When we finally made it to the correct entrance: 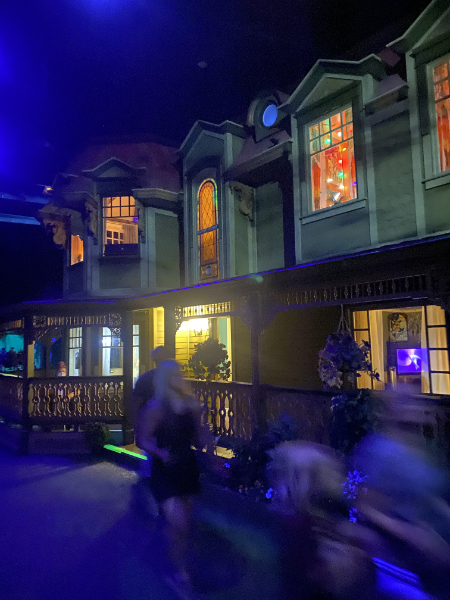 Yep, it’s a house, the home of a family that has somehow triggered a multiverse catastrophe. Don’t believe me? Just open that refrigerator and go on through. Or slide down the washing machine. Or crawl through the fireplace. 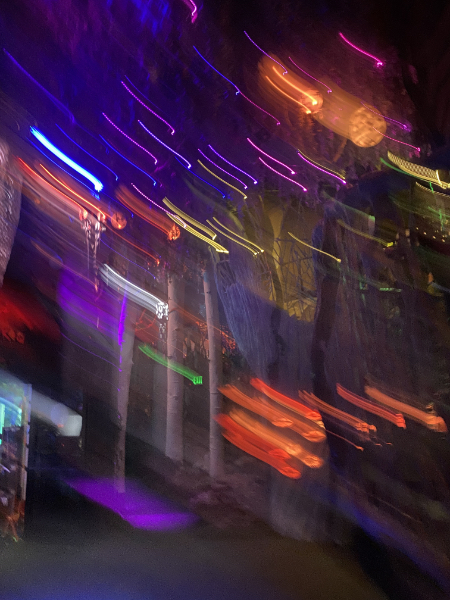 I don’t know what happened to my camerawork, but this is the forest we found ourselves in. 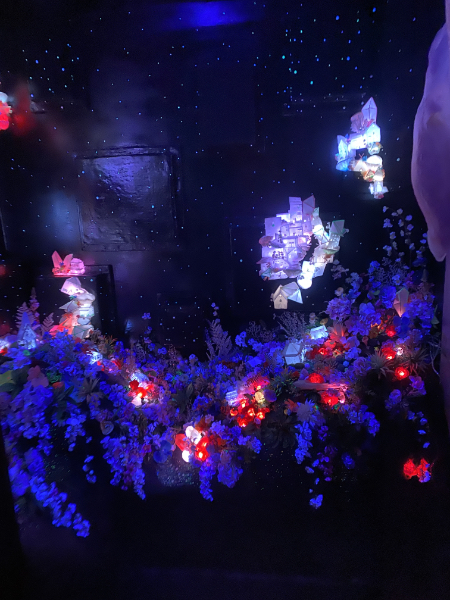 Nothing is normal. There are stairs, balconies, rooms, secret passages. Cabinets open to reveal surprises. Everything is topsy-turvy. Everything betrays multiple intelligences working together to screw with your brain.

Rooms exist outside our reality: 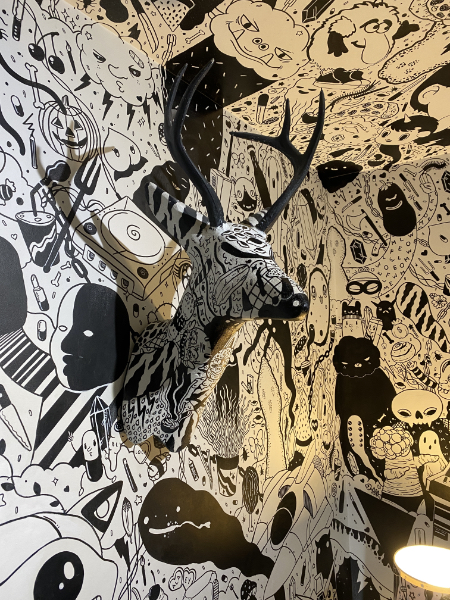 There is a narrative, of sorts, about what happened to this family, with clues everywhere, and that’s a whole meta-layer to the experience that you engage with at your peril. I made note of it (I liked the hamster showing up repeatedly) but soon just gave myself over to the experience. My Lovely First Wife persisted in untangling the threads. 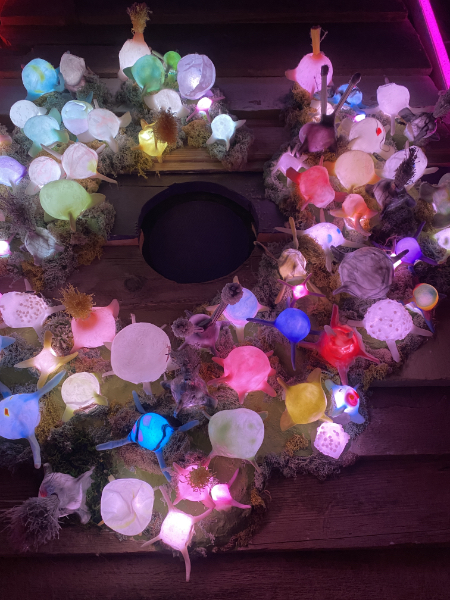 Inside the ice cooler: 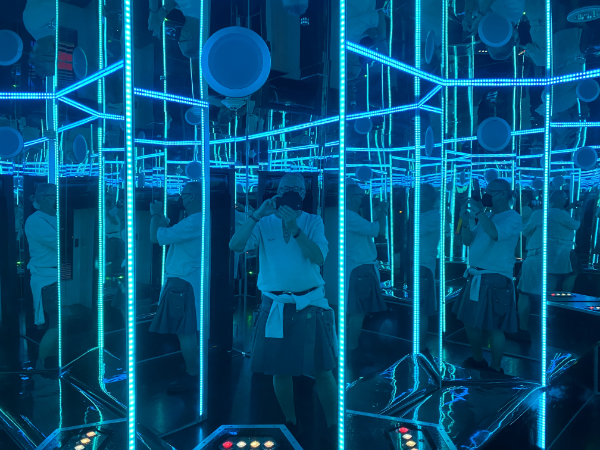 See the buttons? Each one changed the colors and activities of the lights as well as the sound track.

Then there was this room: 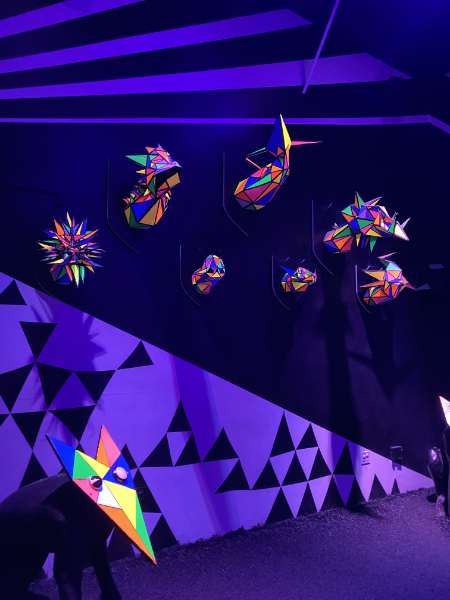 …where the button-eyes of the critters launched some really fine EDM. From there, we exited into an underwater fantasy: 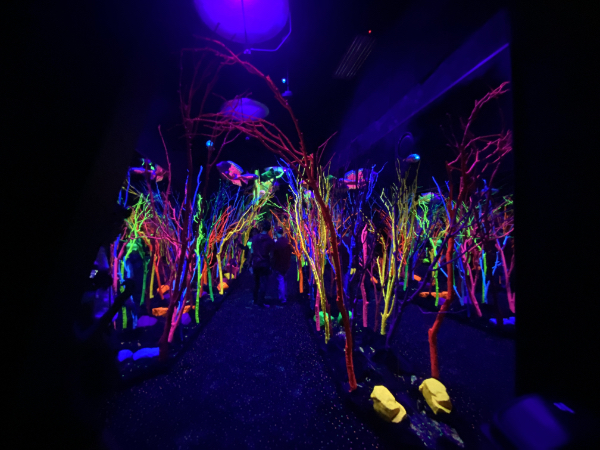 There was a room with a “laser harp”: thin red threads of light that, when you “plucked” them, created sounds. There were tiny hideouts. There was a seat that put you on your back and when you slid into it you found yourself looking up to the front of the bus that apparently was taking off to the International Space Station. There was always more to see.

It takes about two hours to wander around, get unlost, and go on your way.

We found ourselves in awe of the thing on multiple levels. First, there was the sheer audacity/exuberance of the installation. It dared you not to be blown away by what you were seeing and experiencing.

Second, there was the incredible inventiveness of the artists involved. Some rooms had displays of dozens of tschotschkes each of which had been had crafted into some surreal little thing. Whole cities from an alternate universe might be floating over you. Soundscapes were different in every space. Banks of TV monitors had odd things playing on loop. The house was full of family photos, personal documents, newspapers. It was dense.

(We noted afterwards that it’s extremely family friendly. There’s nothing in the least lewd in the exhibits, and even the aliens who wandered around every now and then weren’t scary. The children who were there were having a blast.)

Lastly, there was the architectural/theatrical design: a twisty maze of space, each area flowing into the next, with the literal two-story house giving way to the multiverse with stairs and slides and walkways. Every structure was secure and sturdy, and exits were clearly marked. It was obvious that a lot of thought had gone into making the space as safe as it could be.

We can highly, highly recommend Meow Wolf (now with installations in Vegas and Denver).

After exiting through the gift shop and into the relative silence and calm of the New Mexico evening, we decamped to Tonic, which seems to be the only craft cocktail bar in Santa Fe that we could find. The drinks were excellent, and the bartenders even rose to the occasion when I asked that I wanted a Manhattan but “do something to it.” 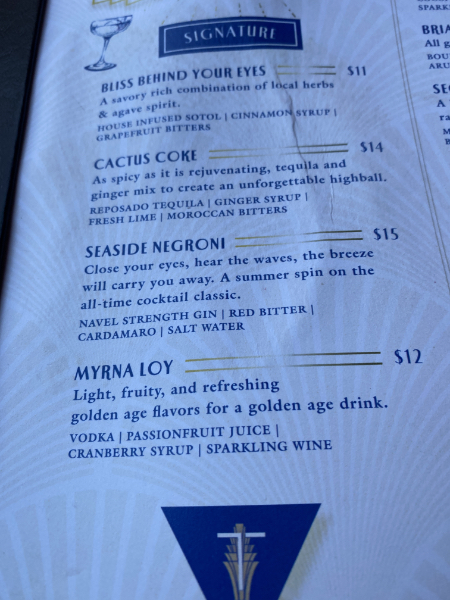 I will be trying the Seaside Negroni at home, albeit with a correctly spelled naval strength gin.

And that was day 2 of our vacation.