My view this morning as I blog: 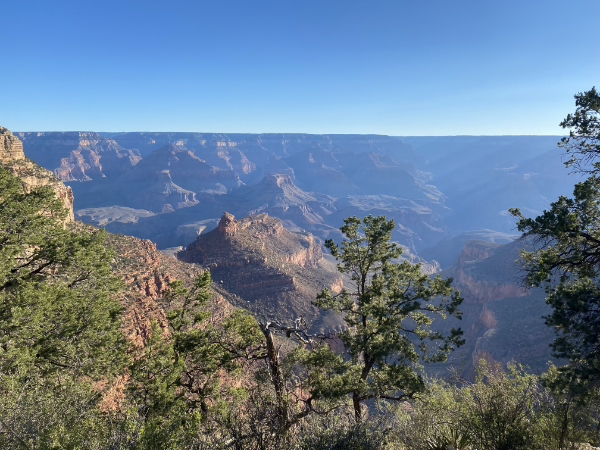 There is a difference between traveling and vacationing. When you travel, you’re Going To All The Places and Doing All The Things. When you vacation, you don’t. Usually when I blog about these things, we’re traveling, but this is a vacation. I’m determined it’s going to be a vacation, and so far my Lovely First Wife agrees with me. (It was a close call when we drove past Petrified Forest National Park on our way to Grand Canyon, but we tabled the idea.)

So you will have to forgive me if these posts are not as detailed, interesting, or amusing as they usually might be.

Day 3, Santa Fe. The International Folk Art Market (IFAM) is quite the org, despite not making it clear on their website that although the festivities did indeed begin July 5, the actual market didn’t open until July 7. We drove to the location where IFAM had shuttle buses to drive us to Museum Hill, hopped aboard the bus, and had a pleasant conversation with a nice Texan lady, whose husband’s stoicism became understandable as the journey wore on and it became apparent, after she repeated the Ali McGraw story, that she had some kind of memory loss.

We were there on the special “early bird” tickets so that we could do the Market and then hit the road to Arizona and not end up pulling into Bright Angel Lodge at midnight. Here’s the line to get in: 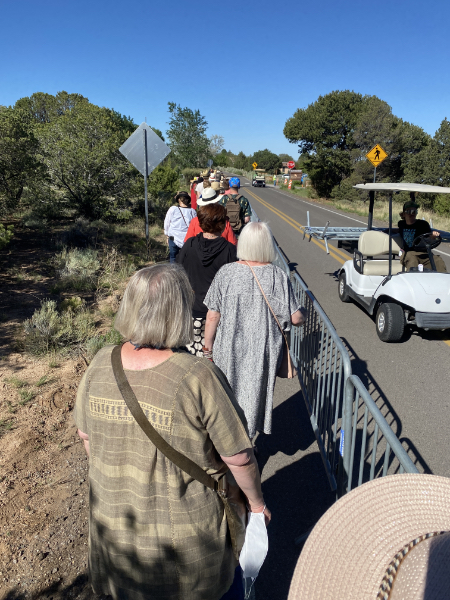 It moved quickly enough. Here’s a uninteresting shot of one of the tents: 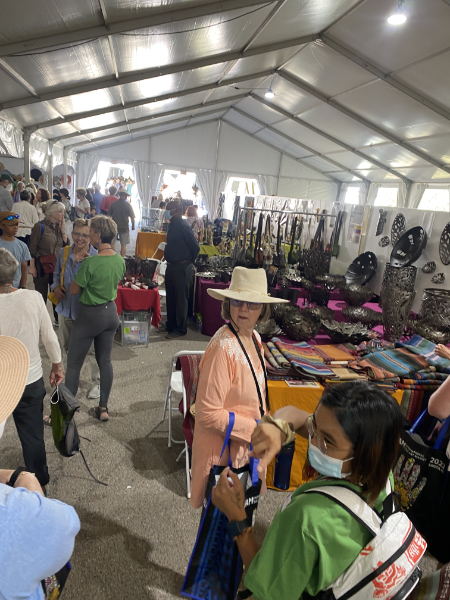 There were over 100 artists from all over the world. You may be thinking of “folk art” as being somehow primitive or lacking on polish or sophistication, but the wares of this market were nothing of the kind. All “folk art” indicates is that it springs from a folk tradition, not from the art academy.

Again, I failed to take many photos, but here’s an extravagant example: 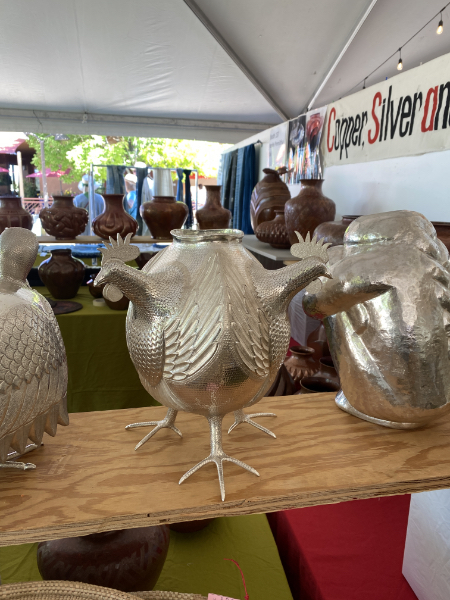 There were a lot of textiles and jewelry, baskets and useful objects, and a smattering of purely decorative items. I had expected to be overwhelmed with things that needed to come home with me, but there was actually very little that appealed.

Part of the problem was that everything was extremely expensive. There were some really funky straw hats from Africa that I could have worn to a burn, but not for $250. The first woven shirt that appealed to me was $500. You can see why I could resist purchasing. I did walk away with an actual Panama hat (from Ecuador, of course) and a couple of brass temple bells for the labyrinth, but even there I imagine I could find the same objects for a lot less money elsewhere.

Another problem, at least for me, was that most of the merchandise was far more professionally produced than I was comfortable with. I mean, do folk artists always sew laundry care tags into their shirts? I just didn’t sense a lot of folk in the art.

And so, regrettably, we can not recommend the International Folk Art Market as a Thing To Do. The Folk Art Museum is, of course, one of the most amazing places you will ever visit, but the Market is for very rich ladies who decorate.

We hit the road, down I-25 and across I-40 to Flagstaff. Because I was driving, I don’t have any photos of the amazing landscapes through which we drove. After we switched off, I did manage to wrangle a shot or two.

In Flagstaff we stopped at our favorite little hippie crystal store to buy silver chains for some of our new jewelry — yes, we have a favorite hippie crystal store to buy silver chains in — and then at Wal-Mart for a few necessities like a couple of camp chairs so we can just sit here and watch the light change over the Canyon. Then it was a beautiful drive up Hwy 180 to Valle — again, we were practically the only car on the road — and on up to Grand Canyon. 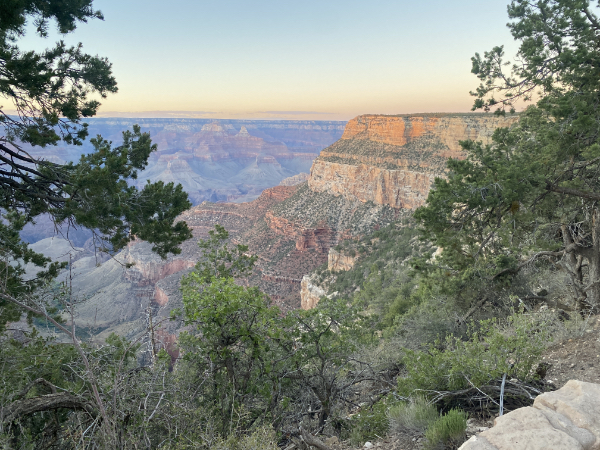 We moved into our Bright Angel Lodge cabin, strolled up to the Lodge, and had a light supper at the bar, making friends with the bartender and a couple of park employees, and feeling that urge to chuck it all and come here to work.