I’m sure there should be a rule about blogging a trip before I have finished blogging about a previous trip, i.e., Greece, but here we are. We live such a glamorous lifestyle — this summer alone we have Greece, To The Moon burn, Grand Canyon, placement trip to Cherokee Farms, minor surgery — that it’s hard to keep up. Apologies.

I checked the dates, booked a flight/car/hotel, then decided that we’d hit the IFAM (as it is familiarly known) on Tuesday afternoon and Wednesday, then drive to Grand Canyon on Thursday for the rest of the week. Perfect.

You may imagine my surprise when we arrived in Santa Fe to find that the Market actually doesn’t open to the public until Thursday. “July 5” was simply when the correlative festivities start, including a $1000/person gala opening on Wednesday night. ::sigh:: The travails of the glamorous, amirite? 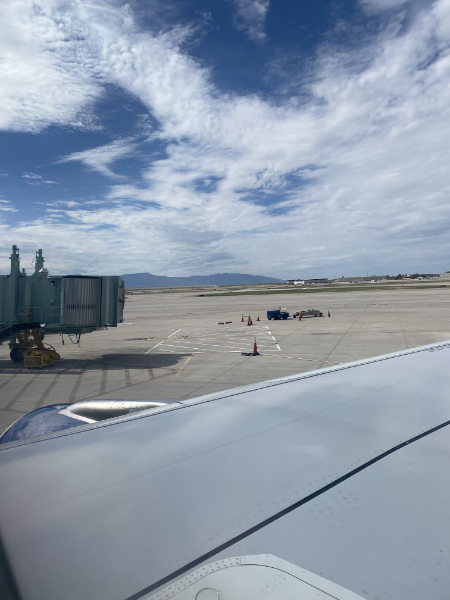 We landed in Albuquerque and headed to the Payless car rental desk. Hilarity ensued. First of all, Payless doesn’t have a desk. They have a little printed sign alerting you that the Budget desk is handling those rentals. The gentleman who assisted me seemed to be some kind of management person who was filling in and not at all familiar with how the Payless interface worked, but he finally got it all worked out.

We headed out to the car, which actually was the first one we came to. After loading our stuff in the back, I noticed the note scrawled on the driver’s side window: DEAD BATTERY. I checked; it was dead. Back I went to the Budget desk, where I lucked out and got the more competent young man. He typed a bit and gave me a much nicer car, a Ford Edge.

I will say now that I love living in the space future, with its Apple CarPlay and large format navigation touchscreens. I may need a new car in the near future.

As is traditional, we hit a Wal-Mart for water and snacks for the road. We had begun following the “quickest route,” i.e., I-25, but before we left Wal-Mart we decided to head up Hwy 14, the Turquoise Trail, and have lunch in Madrid.

Here’s your first Pro Tip: If time is not of the essence, eschew I-25 in favor of Hwy 14. If you don’t stop in Madrid, it adds only 20 minutes to your travel time, and you are often the only car on the road. No interstate traffic, no maniacs riding your tail, no endless billboards and Hooters.

Instead you get this: 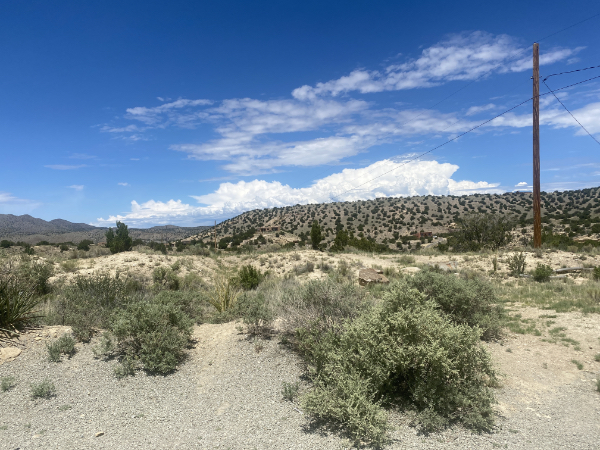 Spectacular. We stopped in Madrid (MAD-rid) for lunch and little light shopping. At first glance, Madrid is just a haphazard collection of shops and galleries splattered on either side of a couple of curves of Hwy 14, but it’s a thriving community. A former coal mining town, it retains all that social and physical infrastructure and is quite a happening  little place.

For example, at the Mine Shaft Cafe where we ate lunch — great burgers! — they have an incredible lineup of live music for the weekends: 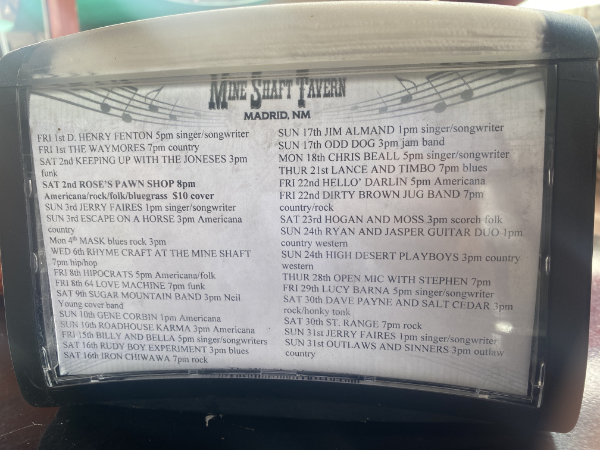 We pulled into Santa Fe and headed to Las Palomas, the little boutique hotel we discovered on our cross-country trek back in 2013. It has not changed: still funky and delightful. 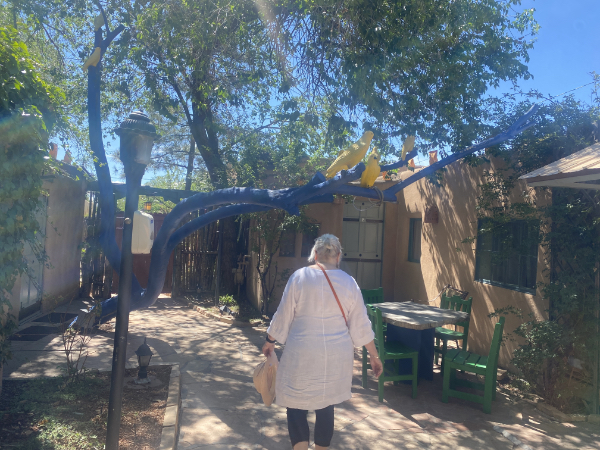 Yes, that’s a dead tree, painted blue, with yellow birds perched on it. 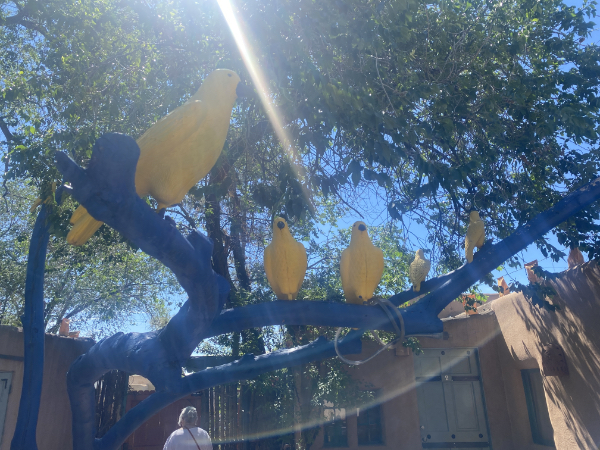 We settled in, and that’s when I discovered that the Folk Art Market didn’t exist for the likes of us until Thursday morning, necessitating some jiggering of plans. Stay tuned.

We did a little heavy shopping — jewelry and a couple of hats — then headed over to the Plaza for the first public part of the Art Market, a parade of all the artists from the various countries. There were about 100 artists from literally everywhere, with volunteers carrying little signs just like the opening ceremonies of the Olympic Games. (There was one guy from Texas.) 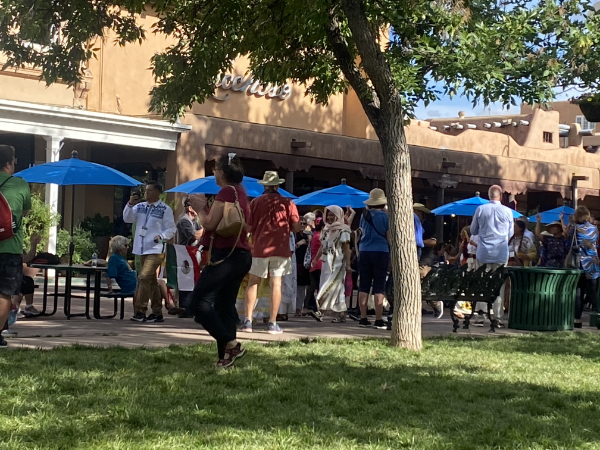 It was very exciting. The festivities continued with each nation being invited onto the stage and invited to sing or dance or whatever. It was not, alas, very interesting, and we were not in a position to see it very well, so we decamped to the rooftop bar at La Fonda hotel. 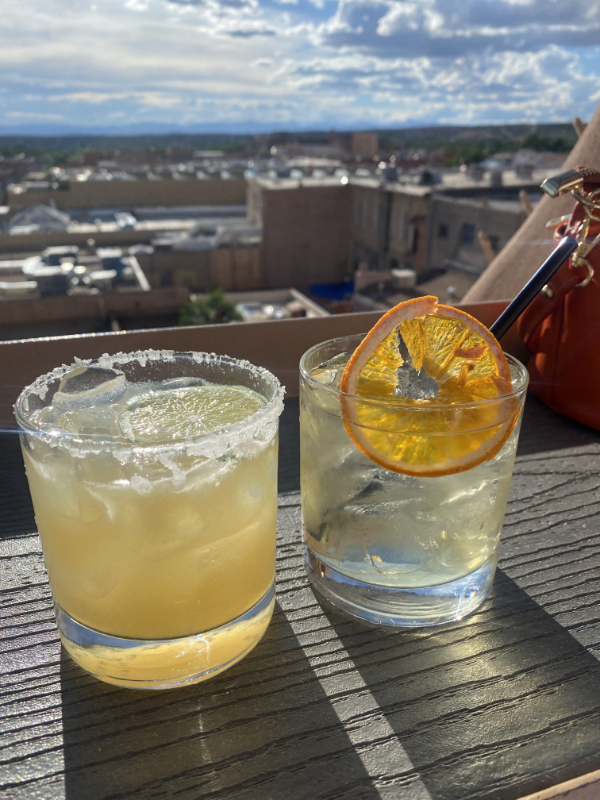 My first-class margarita, and my Lovely First Wife’s clarified milk punch. That was very tasty, but the process involved in making such a thing is prohibitive.

Santa Fe. The rooftop view was not perhaps its best side, but the landscape is lovely. 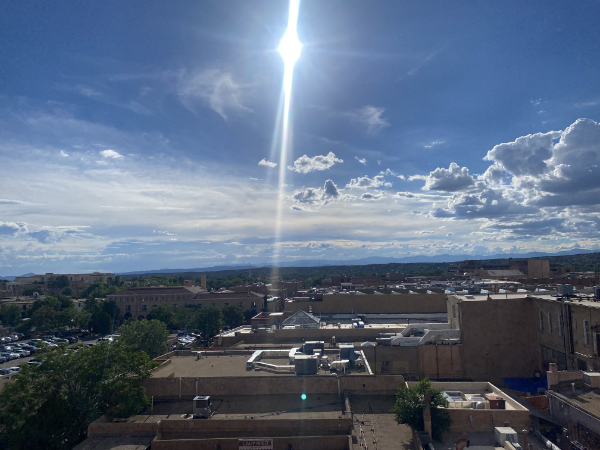 We walked back to Las Palomas to change for dinner at 315, one of our favorite restaurants from our trip here in 2018. The food was marvelous, the wine was great.

Sidebar: I must note that the pandemic has dealt a serious blow to the cocktail community in terms of production. Several months ago I noticed that Averna Amaro had disappeared from the shelves, and when I checked with some Twitter neighbors (including Sother Teague of Amor y Amargo) I found that the east coast at least had been without Averna for five months. The west coast confirmed. Now it appears that green Chartreuse is also missing. This is serious, people.

On the way to 315, we passed by the San Miguel Church, which we had not seen before. 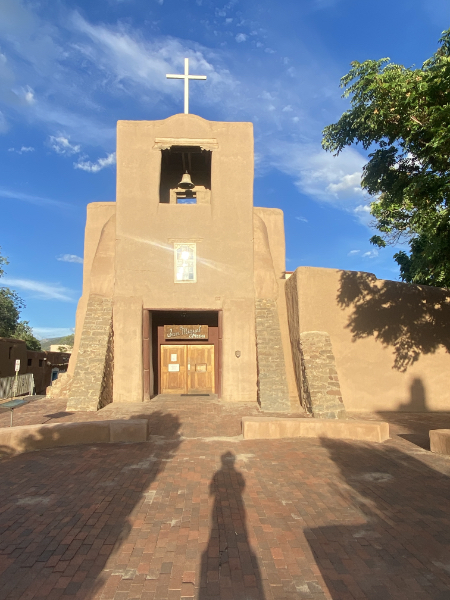 It is in fact the oldest church structure in the U.S. The original adobe walls and altar were built in 1610, about the same time as Saint Augustine was getting going over on our side of the continent.

We made it back to the hotel, where I was delighted by one change in the place: 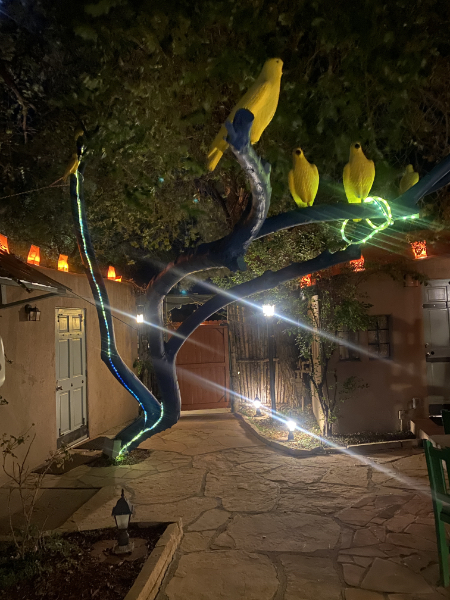 Lights on our bird tree!