Another day on the road!

One item on the Lovely First Wife’s bucket list has been to do the Skywalk at the West Rim. She’s been thwarted in this goal by the fact that the West Rim is four hours away, but since we’re here for the entire week we made the trek over.

To get there, you have to head south on highway 64 to Williams, then west on I-40, then back up via a couple of highways and then just plain roads.

Here is a traffic sign. I wish I could remember what the message was, because it was very amusing. Maybe it will come to me. 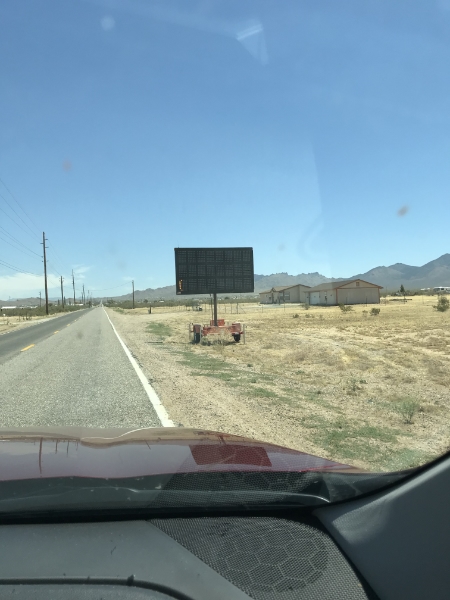 As you turn off onto the road that eventually leads to the West Rim, there is a Joshua tree forest. 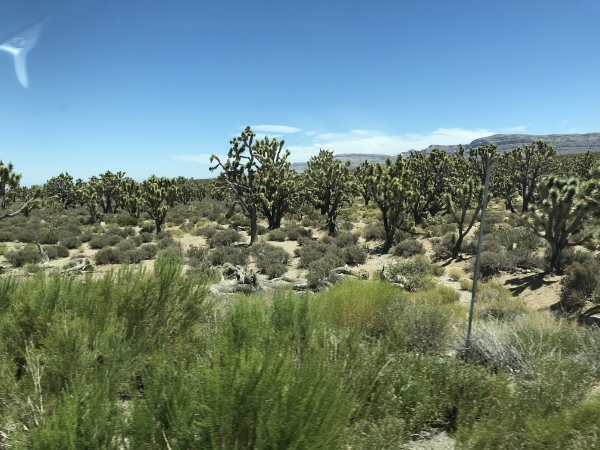 I won’t bore you with the rugged landscape through which we drove. It’s stunning, but the phone just can’t capture how gorgeous it is.

Finally we arrived. The West Rim is tribal land, and the Skywalk is the Hualapai tribe’s tourist attraction. It’s a thing: planes, buses, and helicopters buzzing around like hornets are all part of the business. 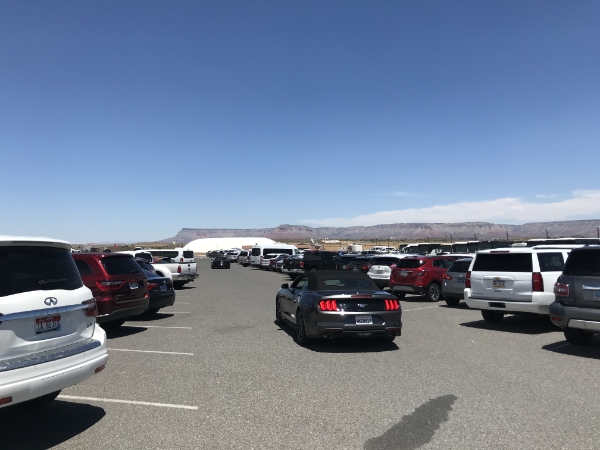 The white thing is a giant inflatable Quonset hut contraption with the ticket office/gift shop. 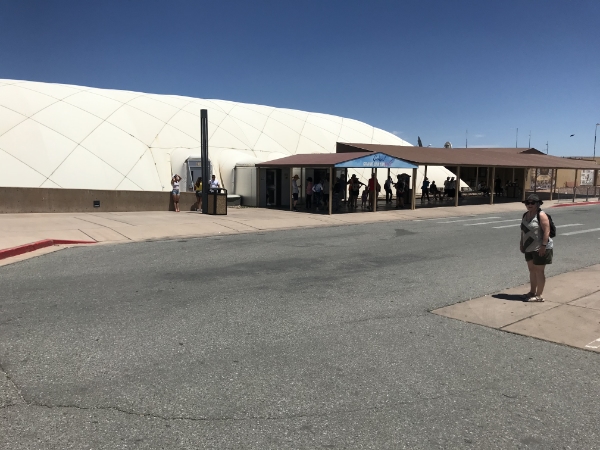 We found the crowds. 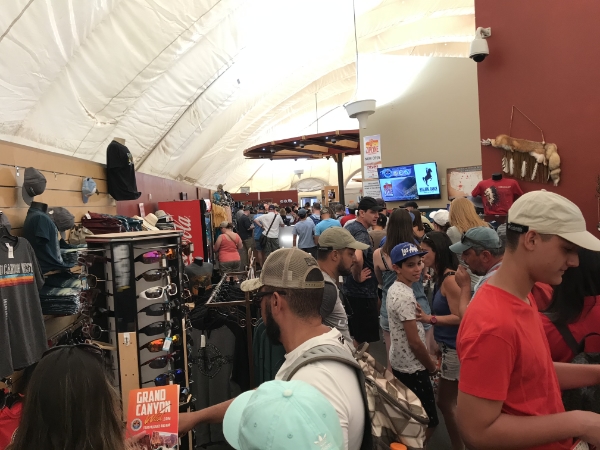 Finally the Lovely First Wife asked for directions and we got into the proper line for boarding the bus.

There are three stops for the buses: Eagle Point, Guano Point, and the Ranch. Here was our first view of the canyon from the bus: 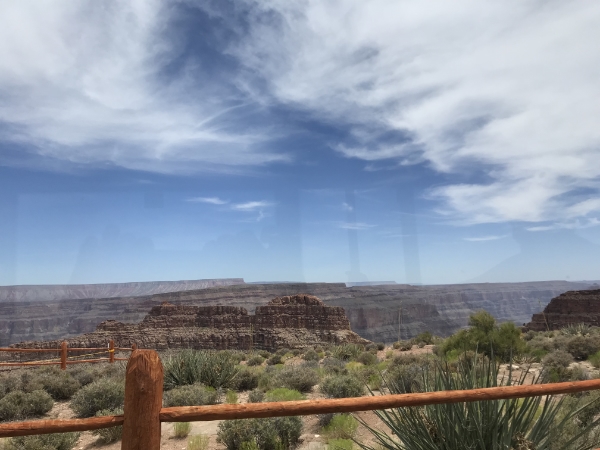 Here for some reason is a selfie that I did not mean to take: 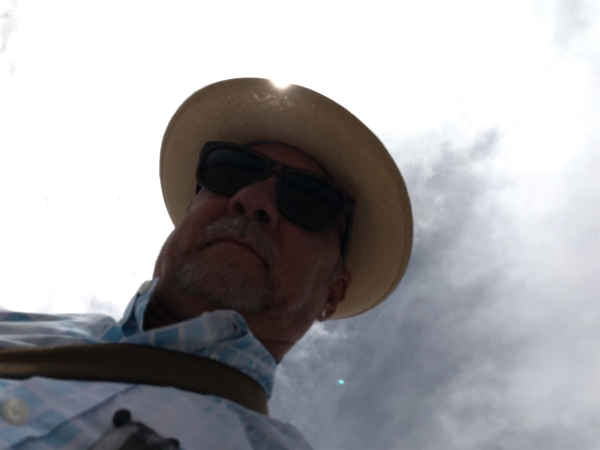 The Skywalk facility at Eagle Point is a lovely postmodern thing, which is detracted from by some pretty basic infrastructure/fencing. The staff are friendly and helpful. 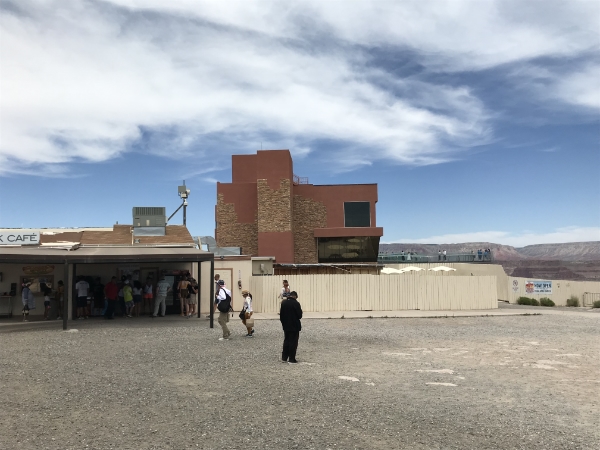 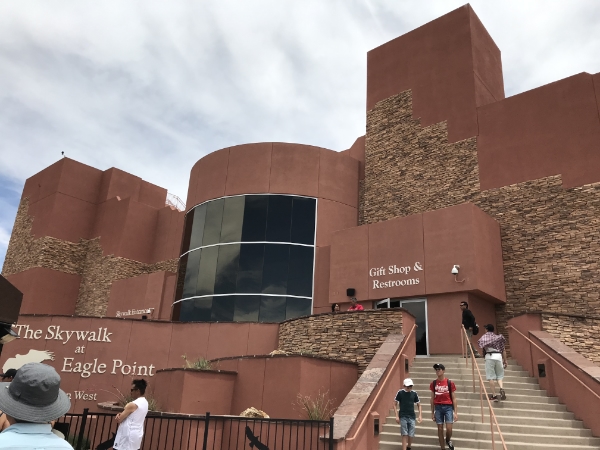 Remember the crowds? We were in line with them. It took a while to get into the building, and then in true Six Flags/DisneyWorld fashion, there was another line that snaked back and forth to get to the locker room where you have to put all your personal belongings into a locker and put on shoe coverings before you go out on the actual Skywalk.

It occurs to me that you may not know what the Skywalk is, and somehow I failed to get a good photo from the outside. (Cameras are forbidden on the Skywalk itself.) If you look at the longshot of the building above, you’ll see what looks like a patio extending toward the canyon.

It is not a patio. It is a 10-foot wide, horseshoe-shaped glass bridge that extends 70 feet out over the rim of the Grand Canyon. Look down and you can see right through the glass platform 4,000 feet to the floor of the Canyon below.

You may very well be wondering why a slightly acrophobic individual would even want to do such a thing. The truth is, I didn’t, and I wasn’t going to, but when ordering tickets I decided I would be the good, giving, and game husband and venture out onto this thing with my Lovely First Wife.

It was a mistake.

I can stand on the edge of the canyon with no problem, though I am more than usually alert when doing so. On the Skywalk I had a moment. I moseyed along, not looking down 4,000 FEET, KENNETH, only out to the canyon, hugging the rail, and finally abandoned the Lovely First Wife to enjoy it by herself.

Before getting back on the bus we strolled through the tribal exhibits outside, replicas of shelters/homes built by the various peoples of the Southwest.

A wikiup—a word I hadn’t thought of it in years: 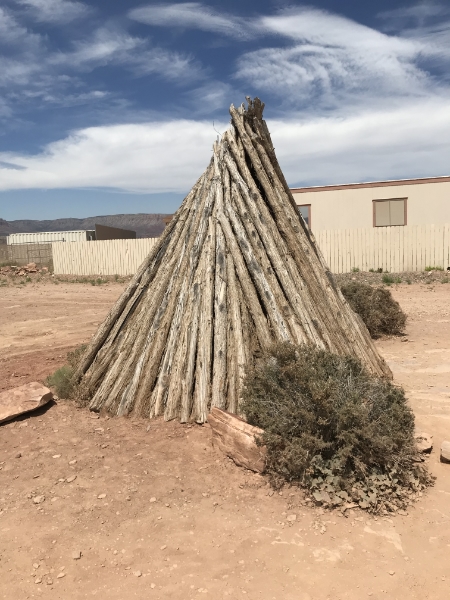 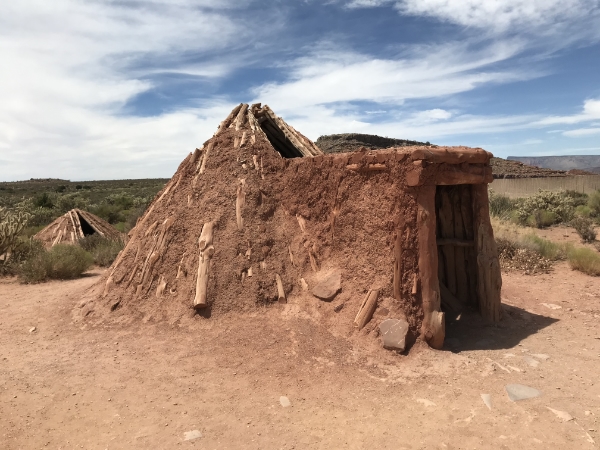 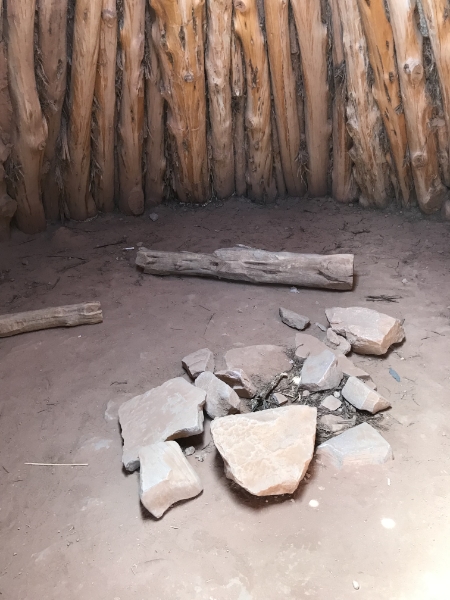 A hogan, the winter home of the Navajo: 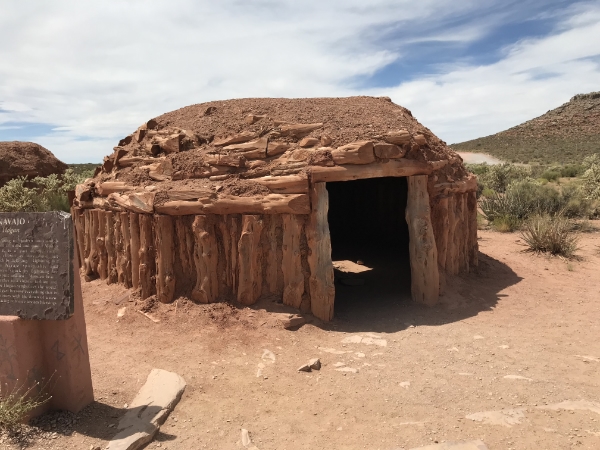 Back on the bus, and on to Guano Point. Yes, it’s titter-worthy. It was named that because about 90 years ago a cave was discovered over on the north side filled with guano, i.e., bat poop, which was very valuable as fertilizer.  The guano company built a tram across the canyon to transport miners and guano.

There’s a snack bar, etc., and a spectacular view.

Here’s a spirit, watching craftily at the snack bar area. 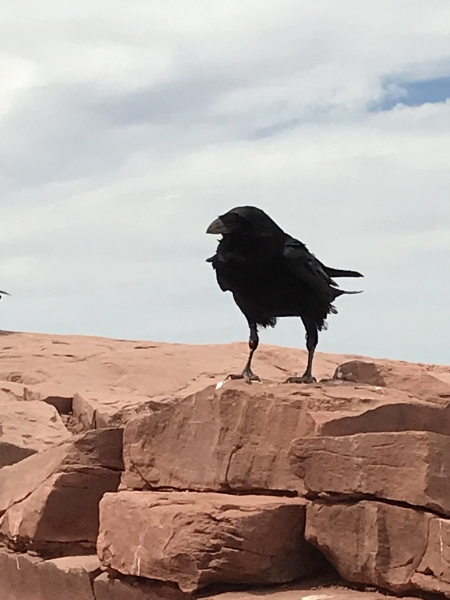 Here are his cohort: 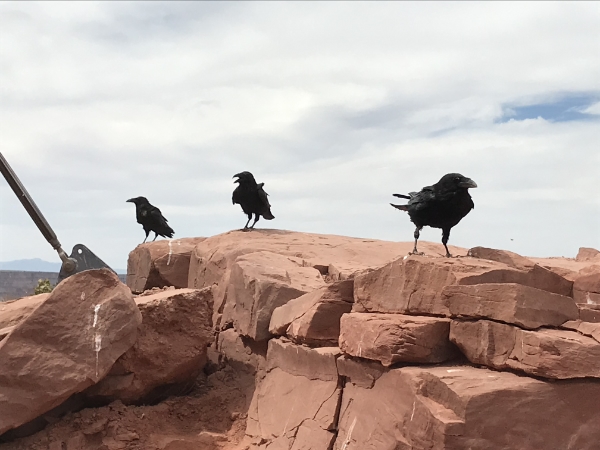 And here’s the spectacular view: 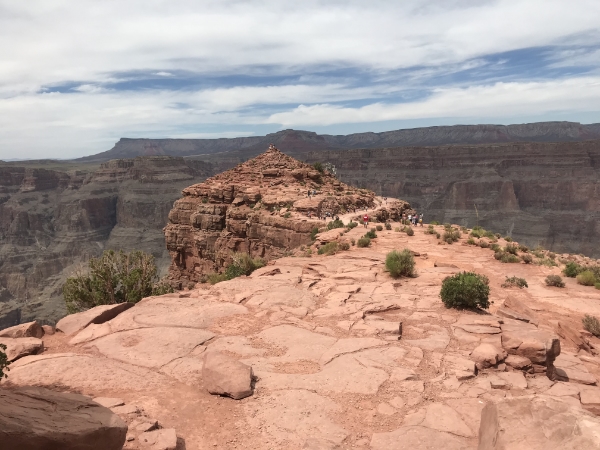 Yes, it’s a spit of land out into the canyon. This is not a problem. 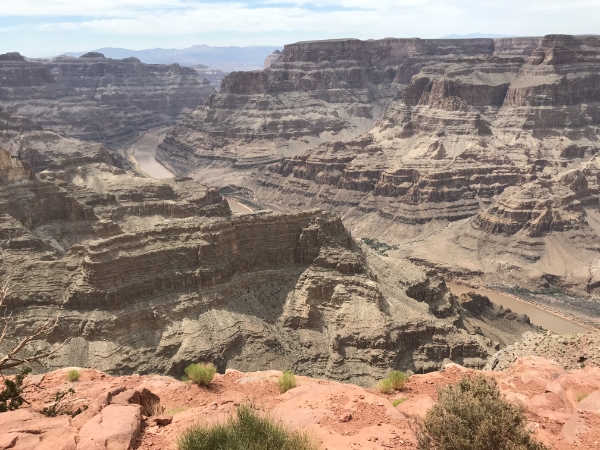 Very austere, not as brightly colored as the Park, but still beautiful.

There are helicopter rides, as you can see in this photo: 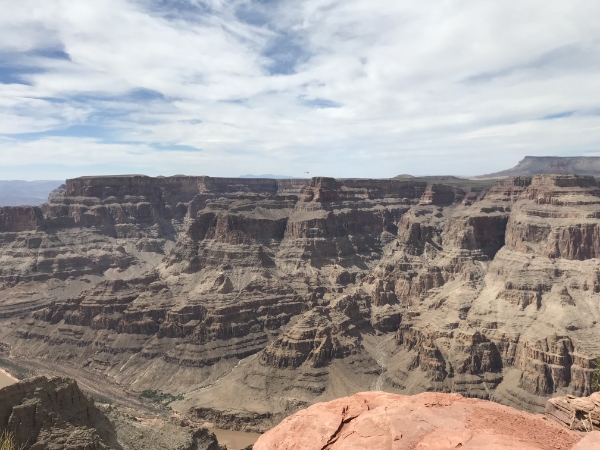 There are pontoon boat rides, as you can see in this photo:

If you didn’t see the helicopter or pontoon boat, go back and look. That’s how huge this place is. 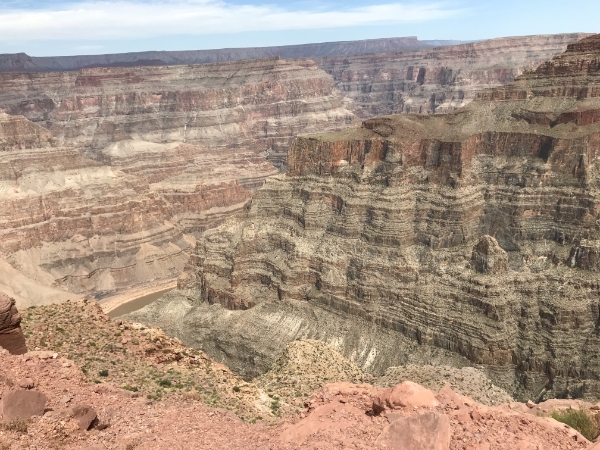 For example, the little knob at the far end of the spit is actually not that little. See the tiny people on top? 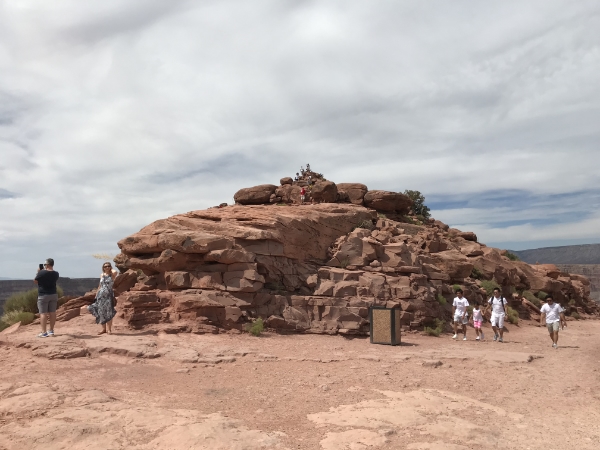 Around the knob are the remains of the tram. It was damaged by a fighter jet (!) in 1960, and the company shut down. It creaks and whistles in the wind. 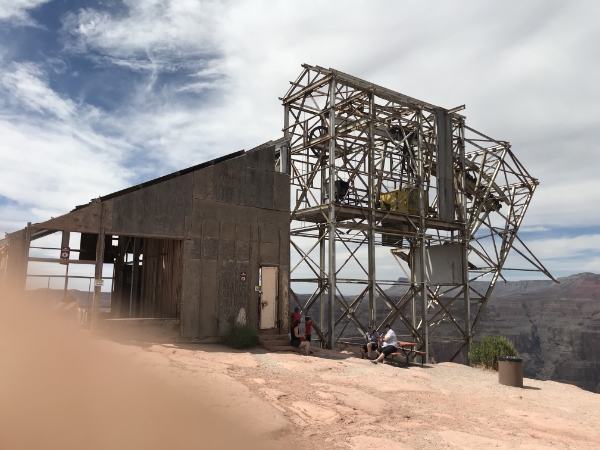 I decided to climb the knob, which you probably find amazing, given that I had just freaked at the Skywalk. And so it came to pass: there’s a path that winds around the knob, but I only made it a quarter of the way when the 4,000 foot drop just got to me. I retreated. 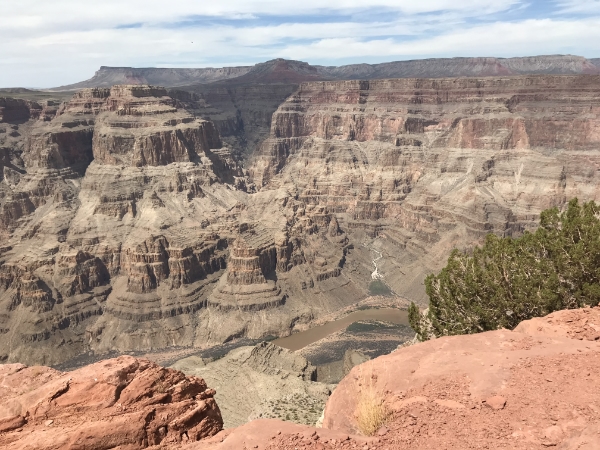 BUT THEN I realized I could just go straight up, avoiding the precipice entirely. I just had to be clever about not twisting my ankle off. 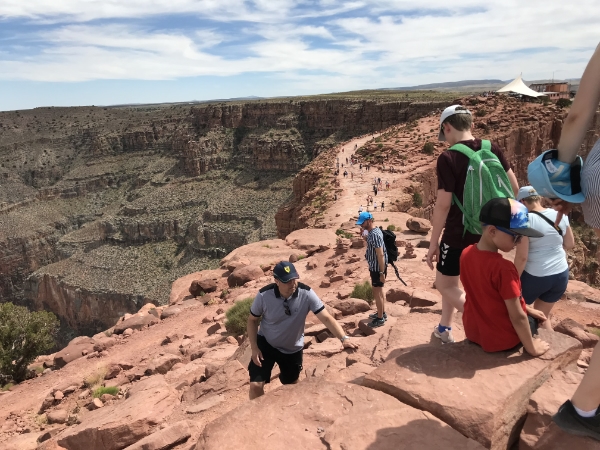 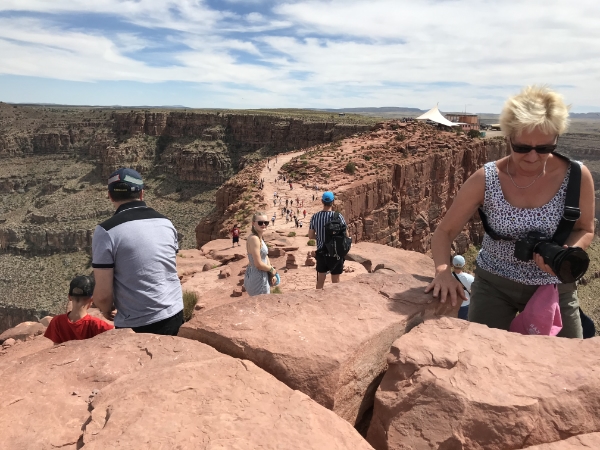 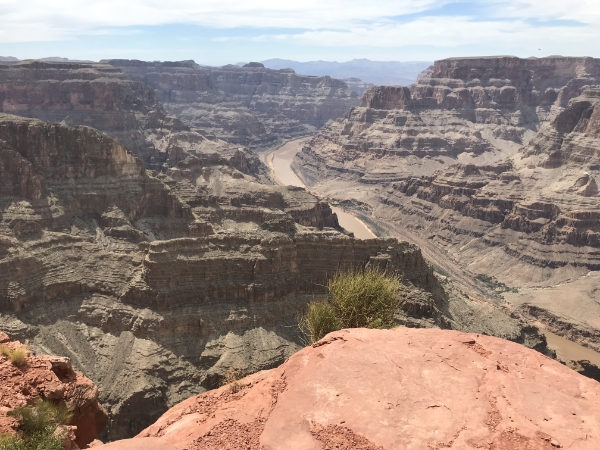 I went up the far side and came down the near side. In doing so, I found traces of my people: 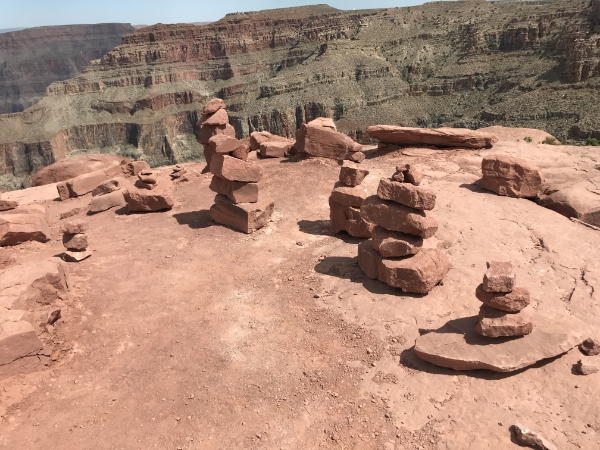 After I got down, I finally found the Lovely First Wife, who had unbeknownst to me attempted the climb from the near side, gotten stuck (she’s afraid to climb down; I have issues with climbing up), and had to be helped down by a kind stranger.

We headed back to the bus stop, missing one bus while some of us purchased some jewelry from the artists there.

The third stop, the Ranch, we didn’t bother with. It has a “Wild West” village look, plus the new zipline, etc., none of which interested us. Plus it was getting late and we still had the four-hour drive back to the Park ahead of us.

The drive back was uneventful. I will say that being on an interstate provided me with internet access; while the Lovely First Wife drove I got some bills paid and some prickly pear syrup ordered from Amazon, plus caught up on some burn Board business.[1]

We pulled into the Park just as the sun was setting. I wish I had photos, but by the time we got back to the cabin it was gone.

We did get a couple of elk doing their thing:

We cleaned up, headed up to El Tovar, snagged a table, and had a light but first-rate soup and salad. The young man who kept us watered is an Iraqi-born Romanian, working here for the summer—Xanterra has job fairs all over the world, recruiting charming youngsters to wait tables. It’s a great deal: they’re paid well, and pay nothing for lodging or board for the summer. This young man was there with four other buddies from Romania (he’s studying to become a mechanical engineer), and I told him frankly I was jealous of his experience. His description of first seeing the Canyon was delightful and completely matched our own.

[1] What, you didn’t know I am now on the board of directors for Flashpoint Artists Initiative, the concern that runs the Georgia burns? It’s a saga all on its own. Later maybe.