I have heard you wondering, “Dale,” you wonder, “what on earth possessed you to go to the Grand Canyon for the week of the Fourth of July?”

It’s a fair question, and you will recall that one of the items on my non-existent bucket list was to watch a lightning storm come over the Canyon. What does it look like? Have a look.

So I called out to the Lodge to make reservations so that I could talk to a person. After making sure he was actually in the Park and not in a cubicle in Dubuque, I explained my goal; he laughed and assured me that if that’s what I wanted, I was coming at the right time.

“But Dale,” you expostulate, “it’s the Fourth of July! What about the crowds? And the heat??”

The Weather Channel app on my phone had a practical hardon for 100°+ temperatures for the week. Every day I’d check, and every day I’d check it to see if it had ameliorated its position. Nope: 104°, 102°, 99°, maybe some low 90s later in the week.

The other weather app on my phone (Hello Weather) claimed it was going to be much milder, but Weather Channel insisted: we were going to melt.

It was not until we began packing that Weather Channel gave up the pretense and admitted, well, yes, the whole week was going to top out at the mid-80s, with lows in the 50s. And so it has been: warm, but not hellatious, and cold enough at night that the Lovely First Wife thinks it’s perfect. (Once we got here, the Weather Channel continued its snark with warnings of rain that simply didn’t exist.)

And crowds? Not so much. Yes, the tour buses disgorge the daytrippers, and the area around the ice cream shop is sometimes crowded, but nothing like Disney World or Manhattan or the Vatican. And when the daytrippers get back on their buses, it’s more like a private resort than anything else.

So while your mileage may vary, we can recommend the week of the Fourth for a Grand Canyon vacation.

Today (Tuesday) we had decided that we would drive over to Cameron. The Lovely First Wife is addicted to travel books, and her book jocularly recommended Cameron as being not much more than the “trading post” and gallery. Sure, we thought, we’ll drive over to Cameron, look at the trinkets, then drive back to the Desert View tower and work our way back along the canyon.

It wasn’t until we had woken and were getting ready that we remembered that the Cameron Trading Post was where the all-day marathon tour from two years ago stopped on the way back to Tusuyan.[1] Oh well, might as well go check it out. 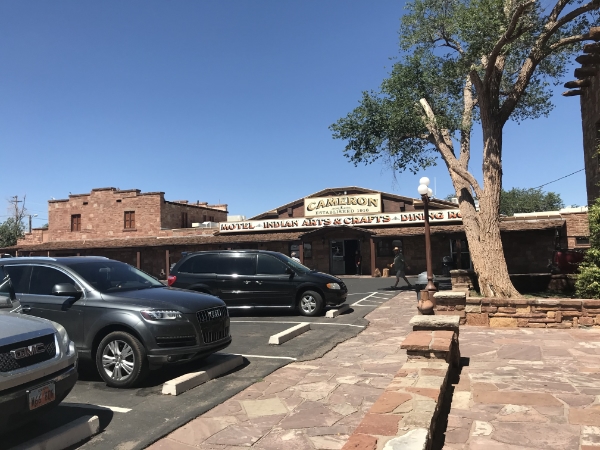 What I at least had forgotten was that the trading post had really nice stuff, mostly nicer than the run-of-the-mill gift shops (although they had plenty of cheap tacky fun stuff too). And the gallery is just that: high end jewelry and Native American artifacts worth a fortune. Like that Navajo cape? A mere $69,000. That kind of thing.

There is a lodge there, and since we were not on a tour schedule we explored the area. There’s a lovely garden behind the gallery, part of the lodge. 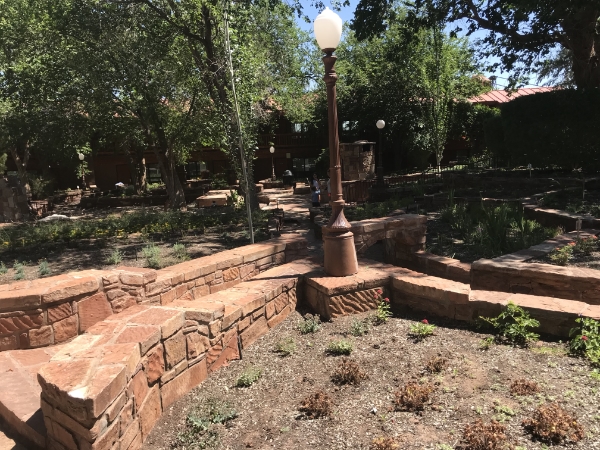 And behind the lodge, the beginnings of the Canyon, or at least a example of the early geologic processes that formed the Canyon. 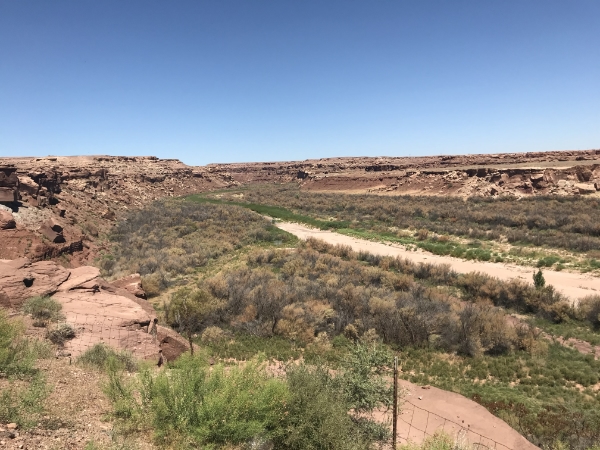 On the way back, we stopped by a still-under-construction roadside park, the Little Colorado River viewpoint. Here the Canyon really gets going. 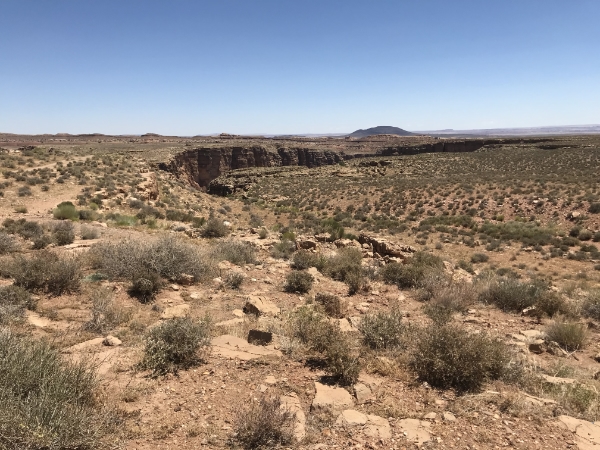 Back at the Canyon, we headed to the first thing you get to when you come in the East Entrance: the watch tower, designed by Mary Colter. This gem was part of the whole tourism push by the gang back in the 1920s. 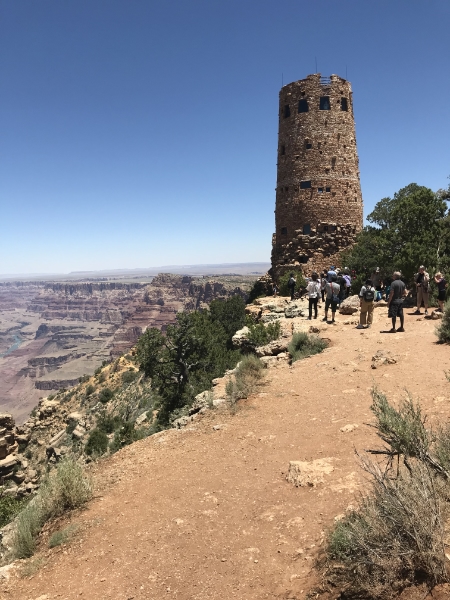 We’ve been here twice before, of course, but the interior is still stunning. 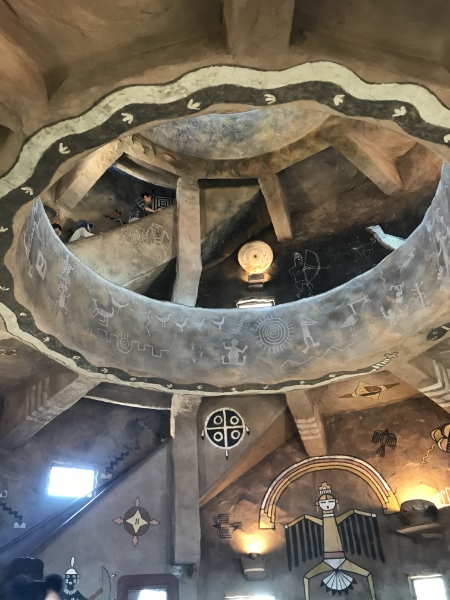 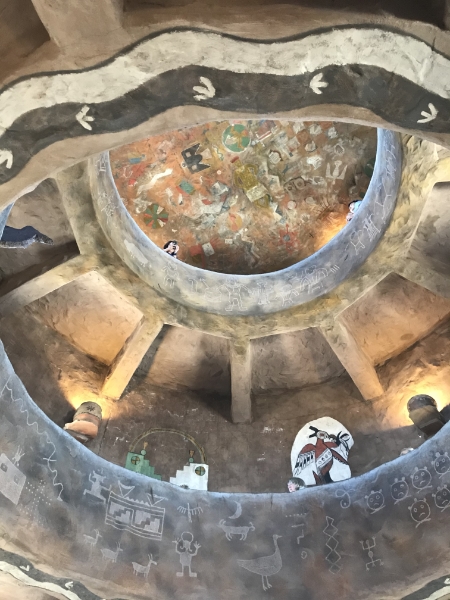 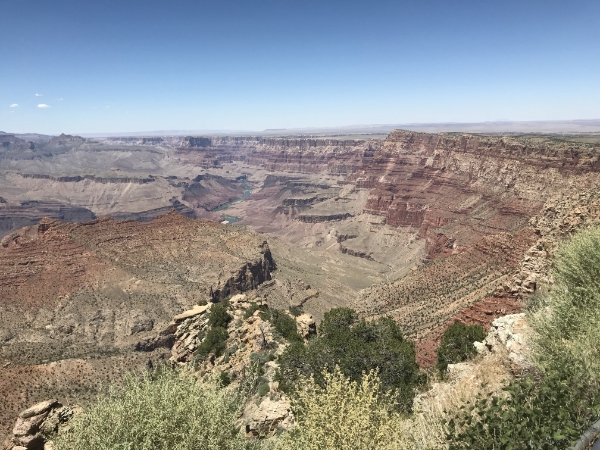 It is here that the Colorado River—for reasons still unknown—took a sharp right turn and dug a trench. 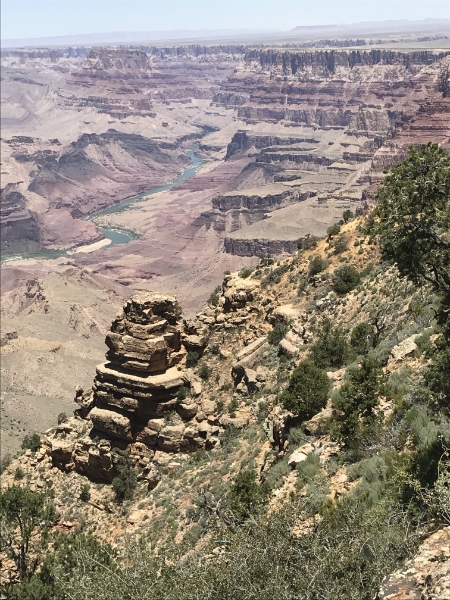 The Park Service does a very good job of providing context for what you’re looking at: geology, history, natural history. The view in this next photo is of Hance Rapids, one of the gnarliest passages on the river. It drops three stories in its flight. 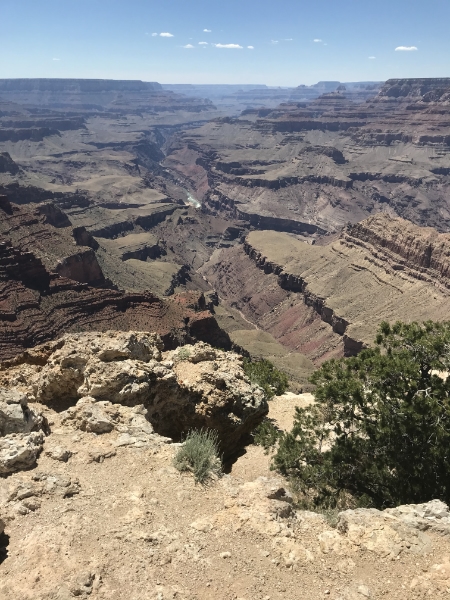 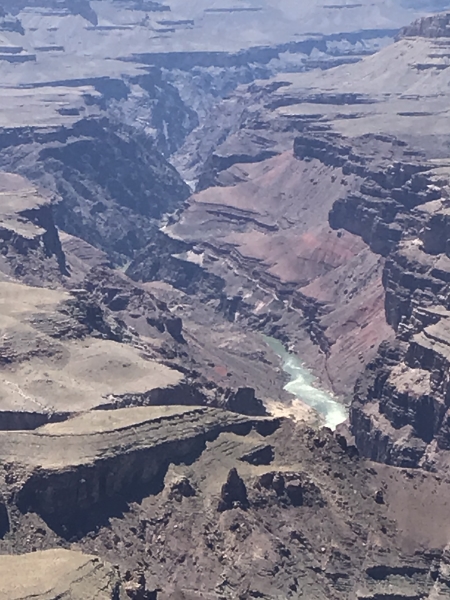 A hoodoo, for you: 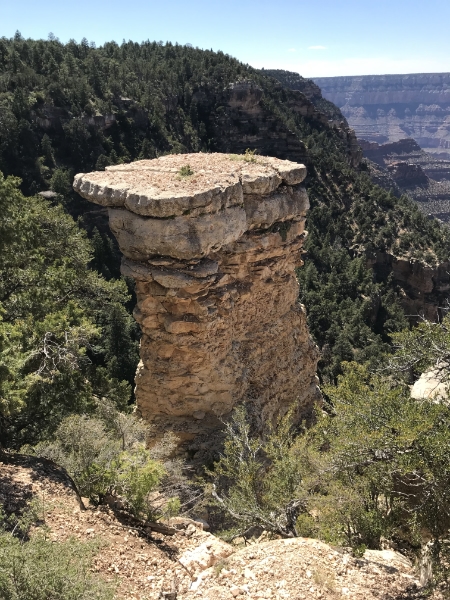 One of my pro tips for the Canyon is to drive out to the Tower, then drive back, stopping at every viewpoint. You might wonder what difference a mile or two makes. Trust me, it makes a difference even if you’re looking at the same piece of the Canyon. For one thing, the light will have changed even in the short time it took you to drive.

Here’s a hoodoo known as The Duck. 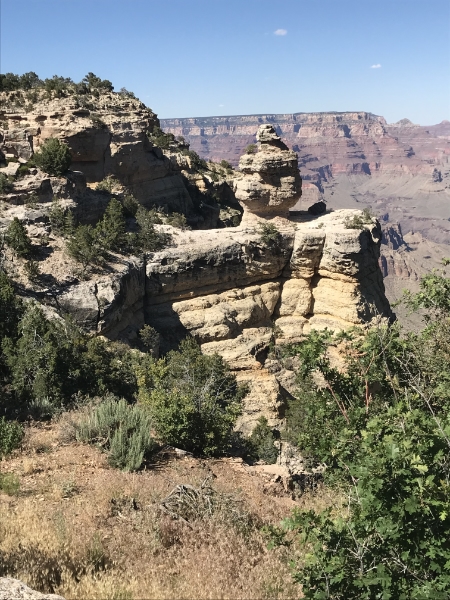 Once back in the Village, we decided it would be our nice night out. We dressed up and headed to El Tovar, where we had reservations in the Dining Room. 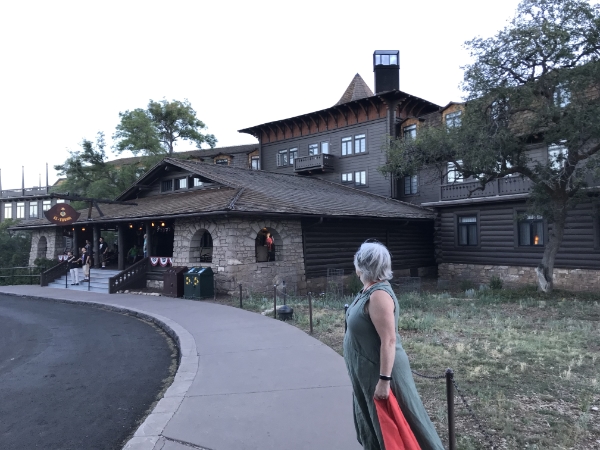 Pro tip: If you’re going to bring nice pants to wear for an evening out, remember to pack nice shoes. Otherwise, you have to fall back on city chic with jeans, white shirt, and jacket, to go with your sneakers.

I rarely take pictures of my food, but this dish: grilled trout with a pickled ginger sauce, jasmine rice, and snap peas. Oh my. 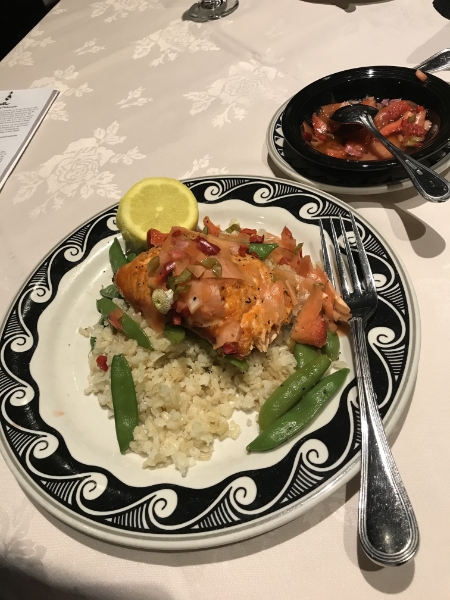 Sorry, no sunset photo today. We were busy wallowing in first class dining.

[1] Although curiously I made no mention of it at the time.