It was truly a glorious 4th here in Grand Canyon. For one thing, it did not rain on our parade, nor did we have to listen to wooden, anodyne speeches.

I have nothing to report for the morning. Having missed two days in blogging this adventure, I had to set aside the entire morning to catch up. The only thing that made it easier was that—as was foretold in the prophecies—the National Park Services HQ has wifi, real wifi, wifi that might even be faster than mine at home. (I’m looking at you, NuLink.)

So I spent a couple of hours resizing the photos and writing the posts, then hopped the shuttle over to the Shrine of the Ages and walked over to the HQ. I passed through the lobby into the courtyard and set up shop on a picnic table. 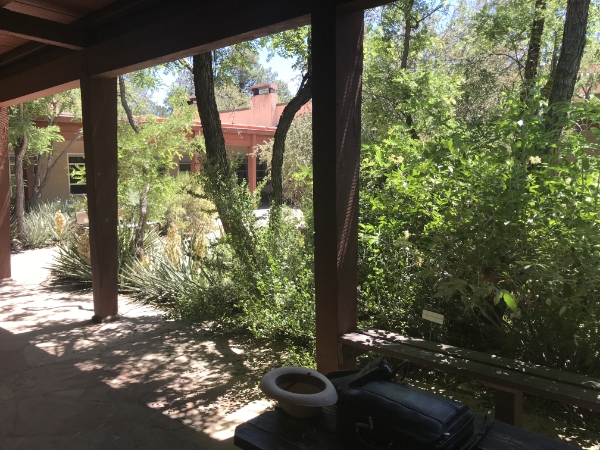 Technically the wifi belongs to the NPS Research Library, a tiny room off the courtyard. 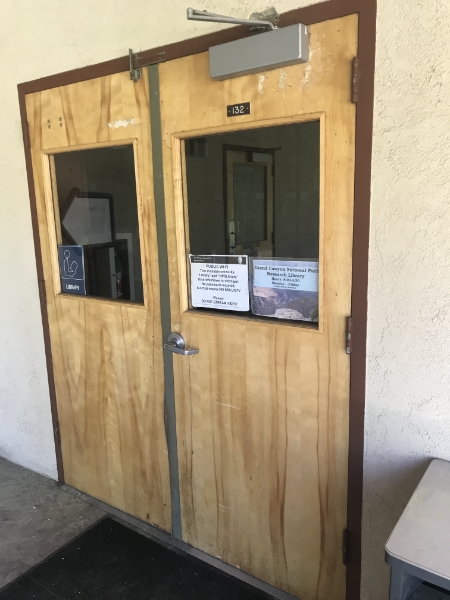 We had stopped by late Monday afternoon to upload photos, finishing just seconds before they closed up. The librarian actually rushed out the door ahead of us; he was not in this morning so I could say hi and thank him.

As I was waiting for the many many photos from Tuesday and Wednesday to upload, I noticed this: 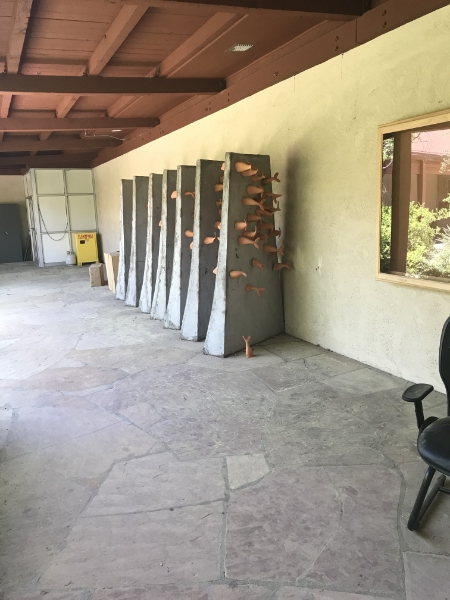 What was it? It seemed deliberate, but it also seemed not quite right for some reason. A closer look was not enlightening. 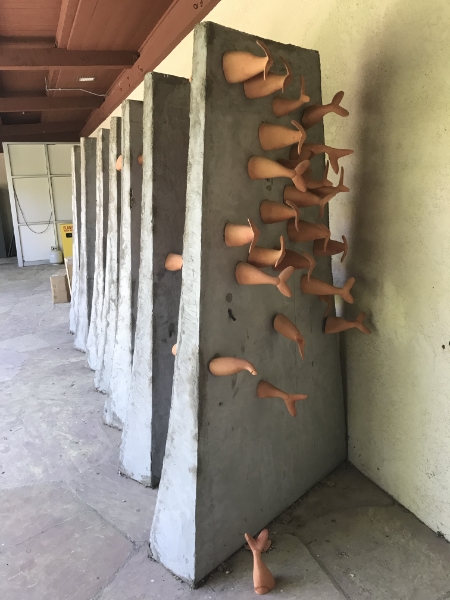 There did seem to be a pattern. 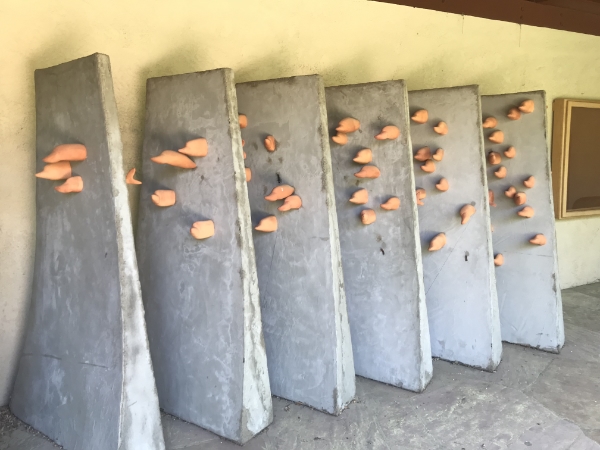 Finally, a ranger emerged from the education department; she was able to tell me that it was a sculpture representing the Glen Canyon Dam’s impact on the humpback chub. You may recall that Major John Wesley Powell described the river as “Too thick to drink and too thin to plow” back in the day. After the dam was built in 1963, the raging, silty river became a frigid, clear river. The ecological impact on the area is only now beginning to be understood.

One of the impacts was on the breeding capabilities of fish like the humpback chub, and this sculpture is an illustration of that. 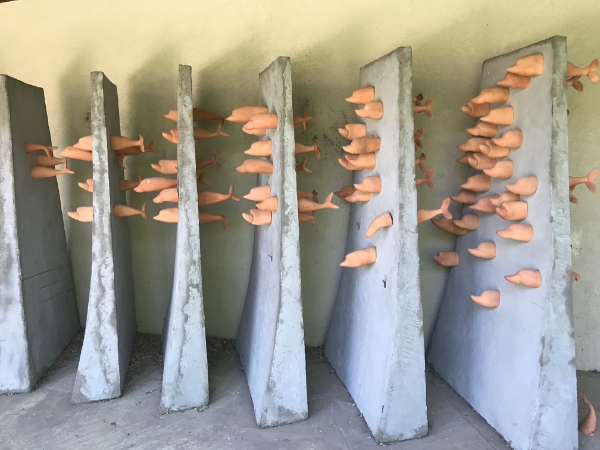 The ranger told me that it used to be in a more prominent position, when the courtyard was used for classes and demonstrations more than it is now. The piece has been shoved aside and needs repair; she said its future was uncertain. It seems a shame, though.

Finally I was able to rejoin the tour, and we made plans for the rest of the day.

First up, take the Blue shuttle to the Visitors Center, then hop the Purple shuttle to head into Tusuyan, the tiny town just outside the Park.

There we celebrated our Americanismness by having lunch at Plaza Bonita. As one does. 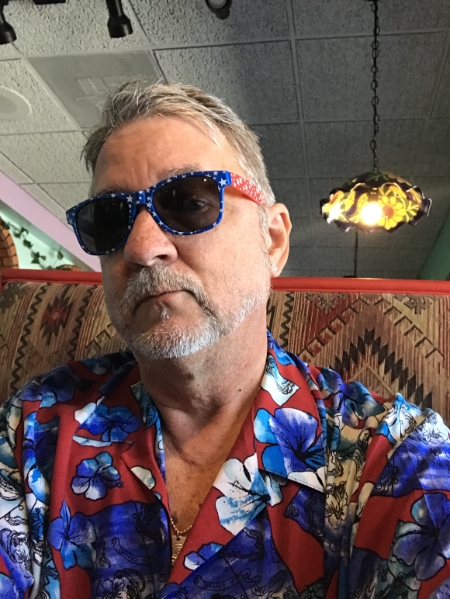 Remember, boys and girls, that when you’re in a desert climate, you have to make sure you are maintaining your salt intake. 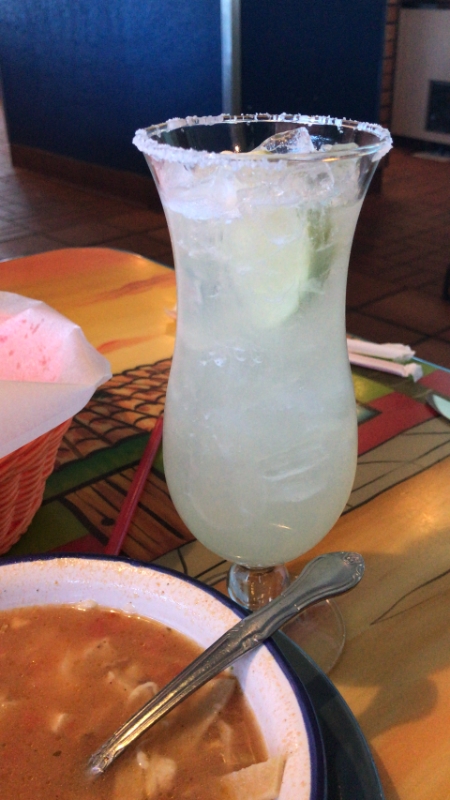 The real reason we went into town is that THEY WERE HAVING A FOURTH OF JULY PARADE, KENNETH!

But Dale, I hear you say, what’s the big deal?

The big deal is that Tusuyan ONLY HAS 558 RESIDENTS! I wanted to see how they were going to pull this off. When we got to town, they had blocked off the northbound lane of Hwy 64 and diverted all traffic into the southbound lane. 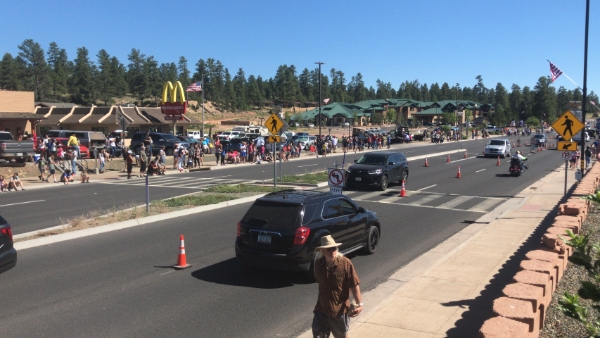 We had read in the newspaper that there would be a bicycle decorating session at 2:30, followed by the parade at 3:30. I surmised that the parade would consist of small children on their decorated bikes.

And SO IT WAS! 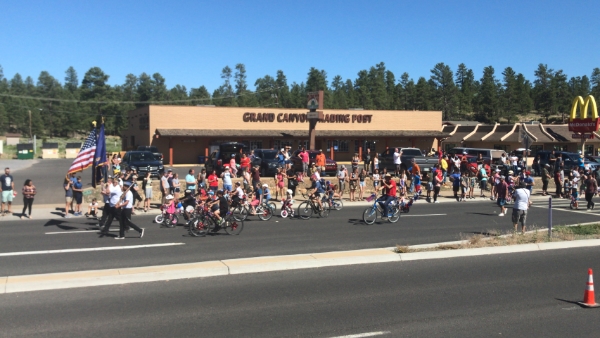 Actually, there was more. 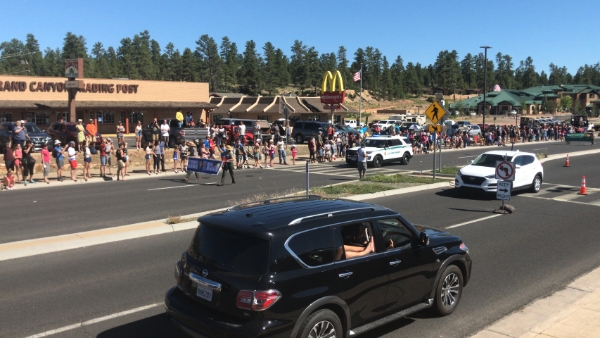 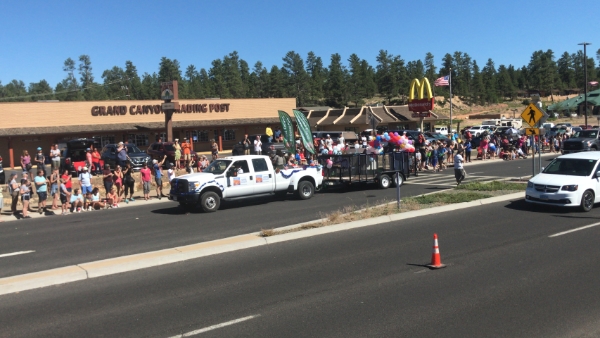 A school bus with a horn like an 18-wheeler… 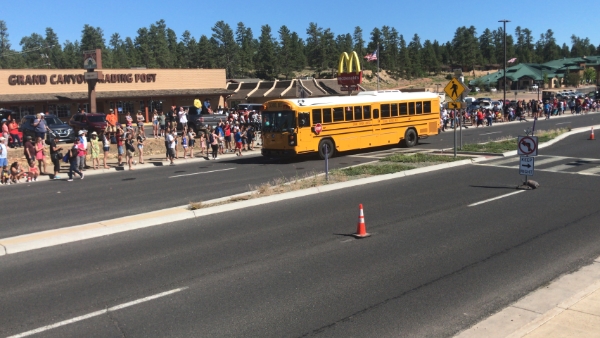 Smoky the Bear (tiny in the center with his ranger handler)… 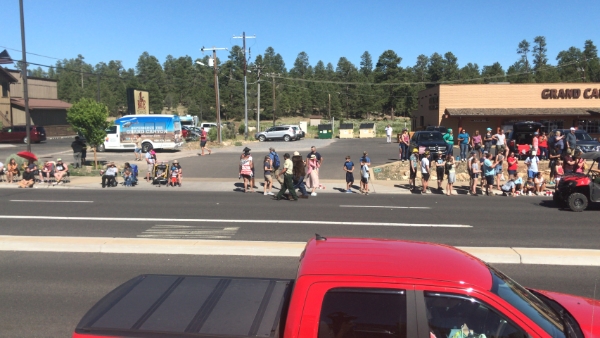 At one point it was clear that some poor schlub had gotten into the parade by mistake. Rather than go with the flow and just wave to the crowd, he panicked and tried to pass the parade to get out.  Bless his heart. 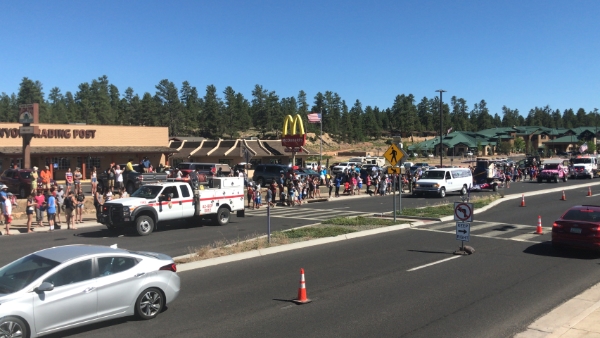 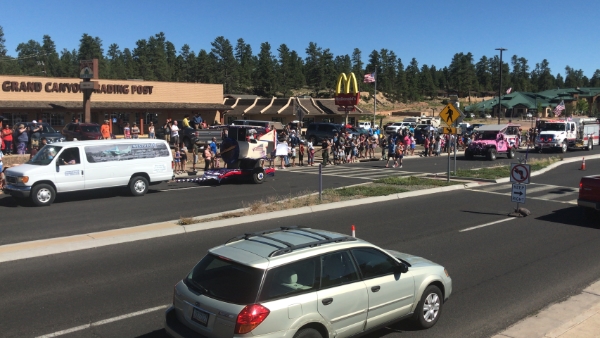 I should say at this point that it’s apparently the custom in these parts to pelt the parade with water balloons. And this float fought back with water guns. 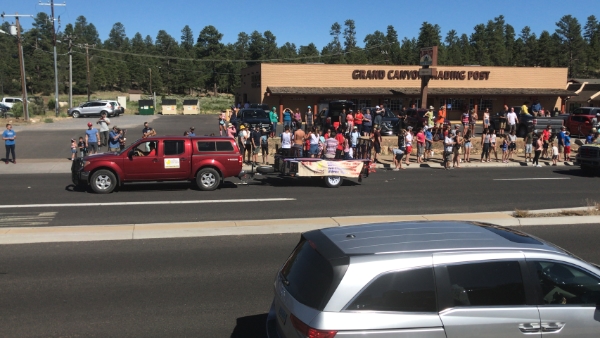 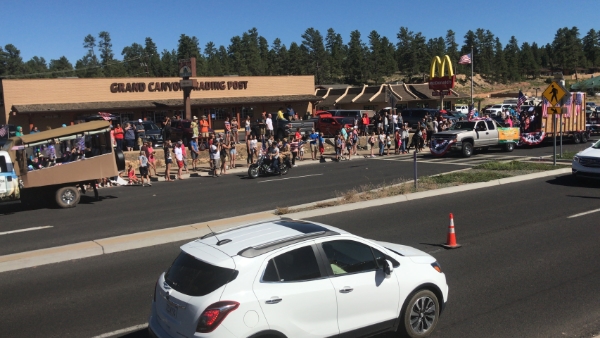 A stage, with a chorus, I think; it was facing the actual parade route. 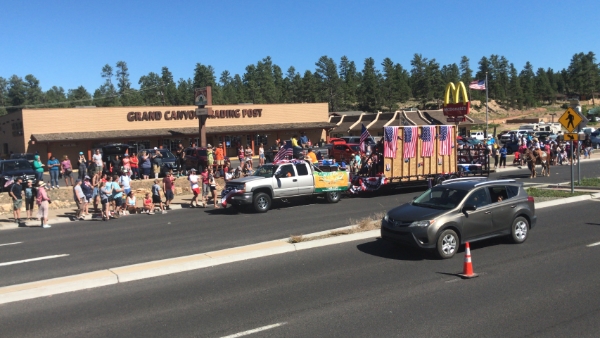 Winding it all up: horse, with mule. 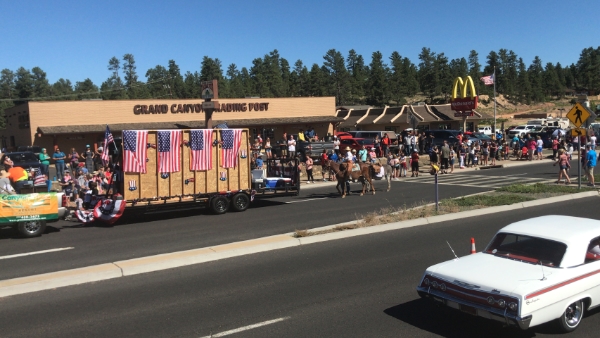 And it was simply the bestest parade ever. We even had a flyover, although I’m sure it was just a canyon flight returning to the airport. Kudos to the citizens of Tusuyan!

We strolled down to the other end of town to the Best Western. (Tusuyan is only six blocks long, if it were divided into blocks.) In the gift shop was this book: 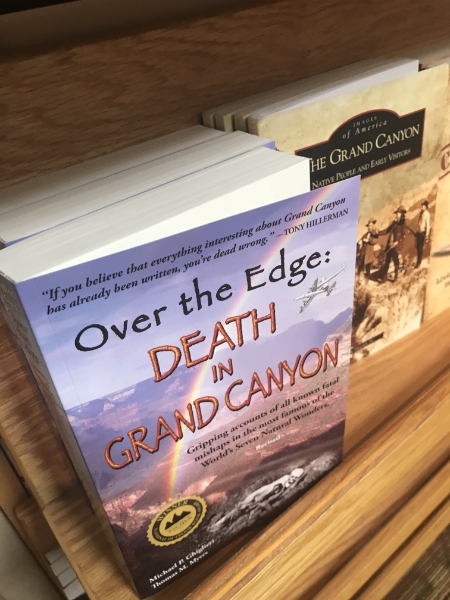 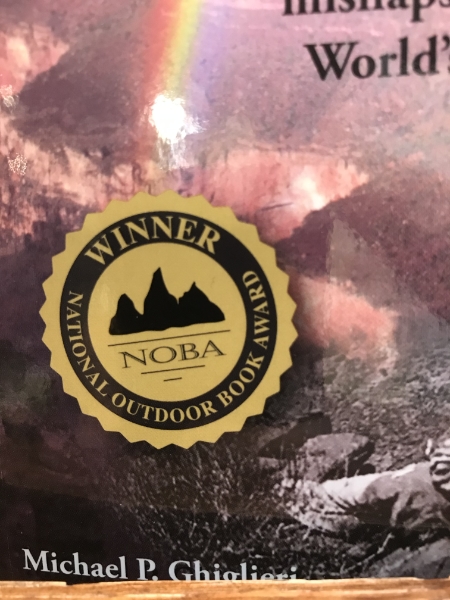 We crossed the street and headed back up.

A pretty flower I hadn’t seen before: 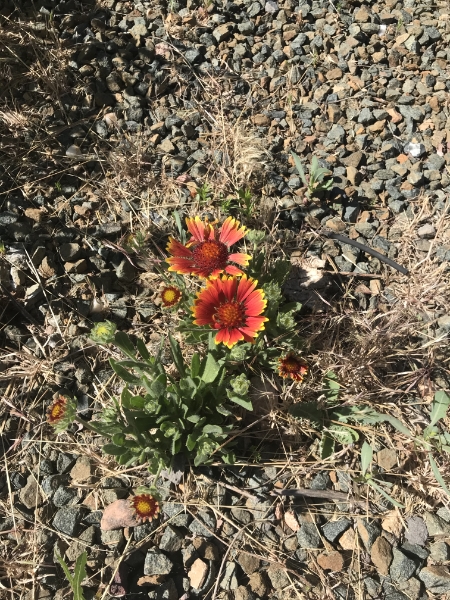 When we got back to the north end of town, we crossed over to the party. Yes, there’s a party! 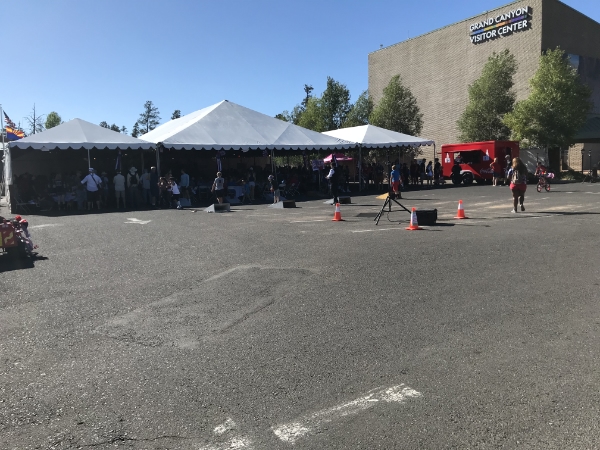 They had a good band, food/drink, a silent auction, a PTA booth, everything you should have. 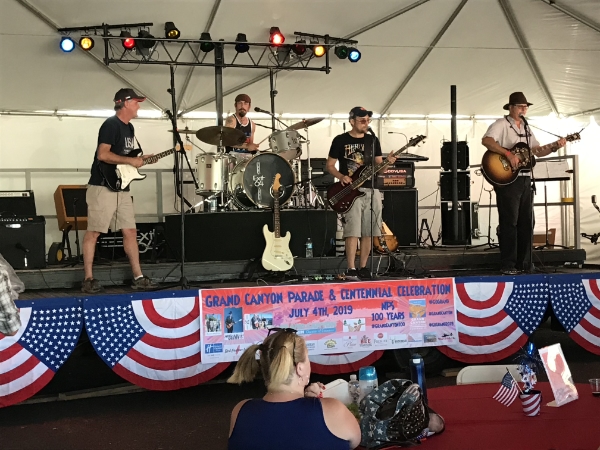 The party was to continue until late, but we had plans. We hopped back on the Purple shuttle, Blue shuttled back to the Village, and then drove the 35 miles out to the Watchtower, barely in time to catch a ranger talk: “Finding Meaning in Deep Places.”

Here was our ranger:

You can’t see it, but he has a cute little blond ponytail. Hippie ranger indeed: he handed out little booklet/journals and pencils, then led us through a guided meditation on what we saw, what it meant to us, what we hoped to find, very woo indeed. I loved it. 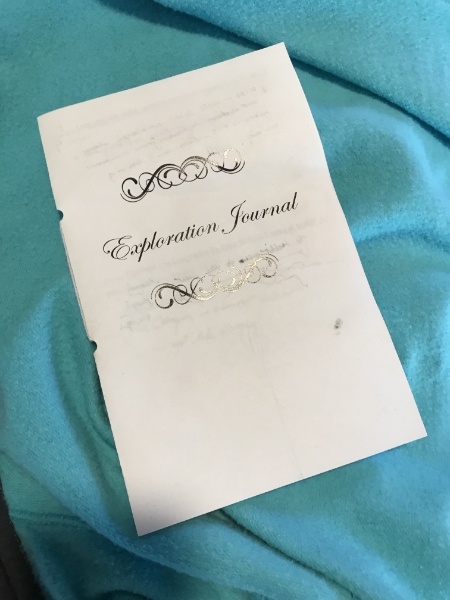 And then it was time for sunset. 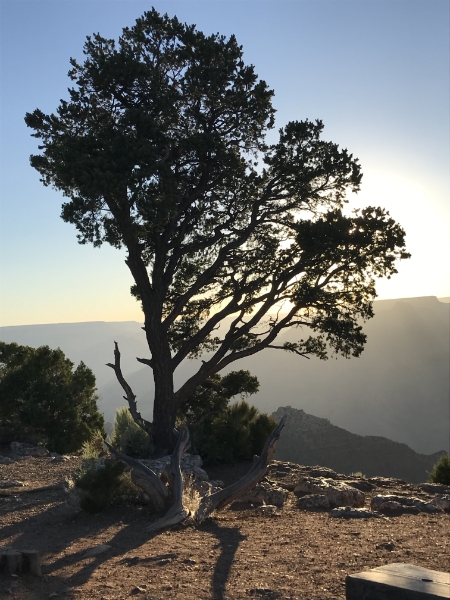 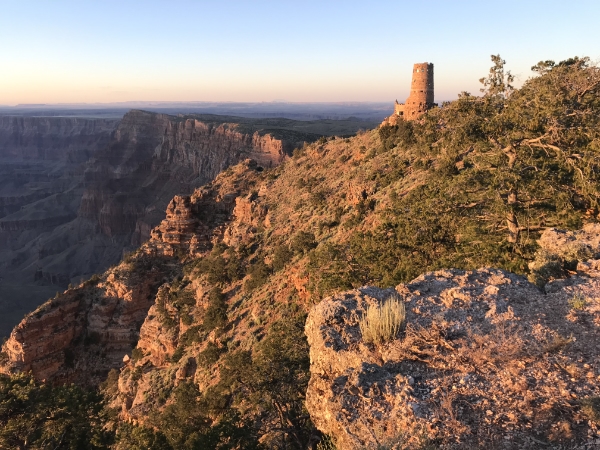 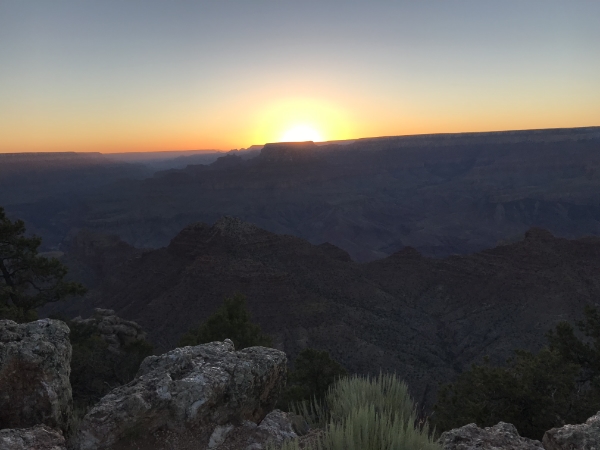 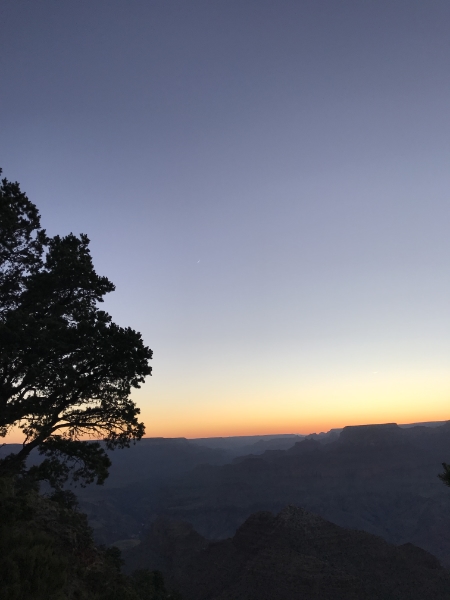 We made the long drive back to the Village and had a very late supper at Bright Angel Lodge, where apparently the bartender was “having a thing” (as our nearly comatose waiter put it) — the gin and tonic arrived 40 minutes after I ordered it, and flat. We bonded with the three young men in the booth behind us over the amazing breakdown in service. Like everyone else we have talked to, their awe of the Canyon was palpable.

One more day (Friday), and that post will be late: on Saturday we will spend the entire day getting home.