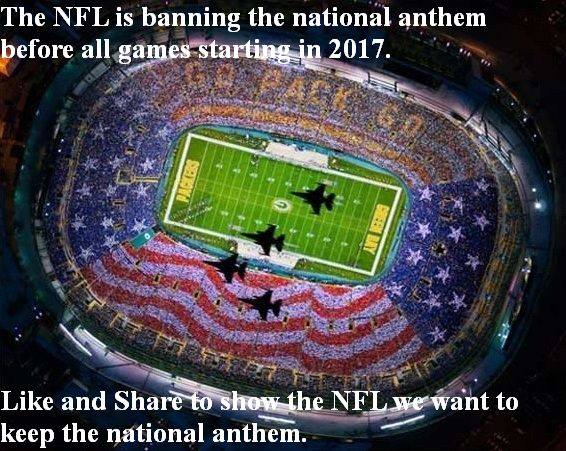 The jaw drops, does it not?

The Lyles Rule of Interwebs F***ery1 states that if it’s too outrageous to be true, THEN IT’S NOT.2

One second of googling was enough to reveal that this thing was a lie.  Look at this: 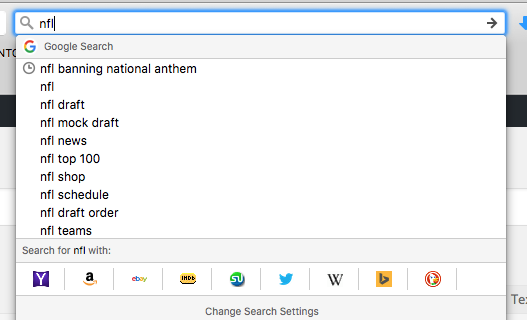 Google didn’t even wait for me to space before giving me a heads up.  And then of course the results themselves were immediate.

So I have some questions.

This kind of thing drives me crazy.  I know we’re dealing with half a nation of stampeded amygdalas, but this would seem to me to be a defining moment for anyone.  What kind of fear and anger are you living with that leads you to believe this outrageous lie and to post it without checking to see whether—somehow—incredibly—the National Football League would make such a self-evidently stupid own goal?4

And more importantly: who is making up these lies?  Even Snopes doesn’t seem to give much credence to their half-hearted explanation.  This meme is not an honest mistake; it’s an outright lie.5  I want this person found.  I want this person named.  I want this person’s photograph plastered all over the FaceTubes like the rapist Brock Turner.  I want him exposed as a liar to all the world.  I want everyone who believed him to start asking themselves why they wanted to believe it was true.

I know, the conservatives are right: libtards live in a fantasy universe.

1 That word is Flowery.  I’m pretty sure.

3 BECAUSE IT’S NOT TRUE, KENNETH!

4 Or whatever they call it in that particular sportsball.

5 Or if it is some idiot’s misinterpretation of the facts as outlined by Snopes, why the hell would they jump to that conclusion?  We’re back in Lyles Rule territory.

One thought on “It’s getting weird out there”