This little poster has been showing up on Facebook: 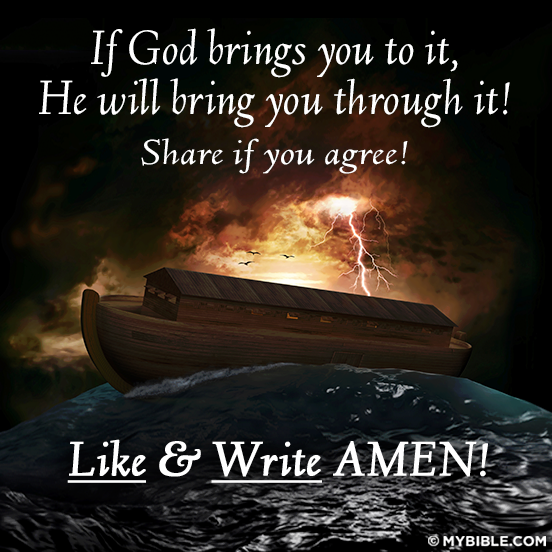 Here’s my issue with this: it exemplifies the execrable egocentrism of many religious folk in our society.  As my favorite liberal evangelical blogger Slacktivist would say, it’s a moral trap to want to believe that your virtue is enhanced and sustained by the unvirtue of others.

These believers look at this poster and identify with Noah and his family—”Yes, Lord, you are mighty we just bless your name for all your mercies to me etc etc etc”—without ever thinking that God also brought all the other people in this painting “to it.”  What other people, you ask?  The people under that water.  Those people.  The doomed, the drowned.

Ah, but those were bad people, wicked people, says the believer of this poster.  And that’s the moral trap.  Whatever the values of the cautionary tale of the Bible, our believers transfer that to their relationship to actual people here and now.  Those people are bad, not like me.  God will bring me through “it,” because I am Godly.  Those others?  They deserve to be under the black, cold sea.

So this morning, as I was doing my doctor-mandated walk and listening to Dream One… again… I lost interest in the music qua music and began thinking about staging, specifically the opening scene.

When I got home, here are the stage directions I typed into the libretto:

Icarus is in the sky again. The Event is on. Observers (CHORUS) attend the moment in amazement and delight.

CHORUS I
[emerging from the SR vomitorium]
[Among them are a handful of Old Believers, who still worship in the old ways.  Their dress may be a bit more ceremonial, and they would not be carrying electronic devices, which the rest of the CHORUS most certainly are.]

I think that would be one kick-ass opening.  The idea of Old Believers would not be central to the plot, but I think it would reinforce the idea that the Event is actually an ancient ritual, one that became laden with meaning for some and that has now achieved the status of religion, while for the majority of us it’s just another entertainment.  Think Christmas.  Or Independence Day.  (I also am amused by the idea of not explaining these people or even referring to them; they’re just there.)

I suppose I should get back to orchestrating “I am alone”…