This is a very, very odd feeling.

I stopped working on the painting on Wednesday, if you will recall: 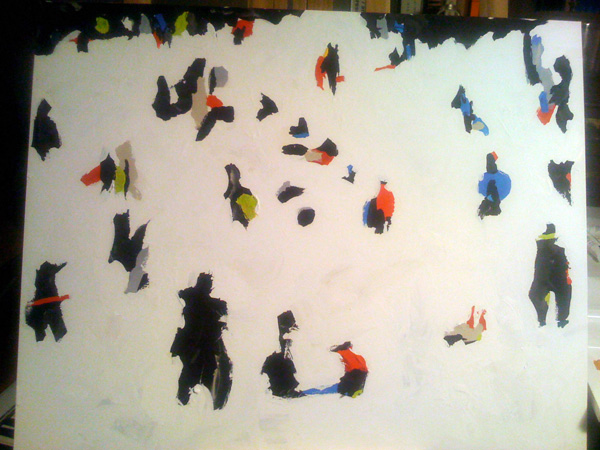 I left it to see if would change on Thursday, and it didn’t. Late last night, I signed it.

This is the first painting I have signed in probably 37 years. It took me a couple of passes, actually. I used to sign my stuff with a sturdy DL, but I decided to start afresh with a more traditional Lyles. I tried a printed version, but finally went with my actual signature. I ended up having to practice for quite a while to get it right.

So now there’s a signed Lyles sitting downstairs, waiting to be picked up today. “Field II,” gouache on board, 15″x20″. I’ve dated it on the back with today’s date, along with the title and my signature again. That was mostly to indicate which way was up, actually.

This is a very odd feeling. It’s going to be displayed in a silent auction next to the work of Martin Pate, Georgie Dunn, and others, real artists. People are going to look at it. Evaluate it. Decide if they want it, could love it, would be willing to pay money for it. Or not.

And I will just have to smile and pretend that all of this is very natural which of course it is not. Even if I make small talk about how I’ve just taken up painting again, I cannot possibly say, “And this is my first painting.” And what if people say, “I’d love to see more of your stuff”? I cannot say, with a bitter laugh, “There is no other stuff.”

Yes, anticipating your response, that would be worse than their not asking to see more of my stuff.

This is the emotion of artistic fraud at its most basic. At least I’ll get a monolog for Bears & Giraffes (now in development by the Lacuna Group) out of it.

But Dale, you might say encouragingly, it’s a good piece. Yes, I think it is. (That does not mitigate its fraudulent nature.) And I want to do more in a similar vein. More “snow” compositions, or should I explore other colors?

It is interesting that what I wanted to do with the subject would be more effectively done with oils than gouache, but oils are for the future. They’re expensive and require a commitment of space and ventilation.

In other news, Stephen Czarkowski has, with prompting, remembered that he has a world premiere at his fingertips and has requested the score for “Blake Leads a Walk on the Milky Way.” This is in addition to the idea we had recently of offering it to the Chinese Youth Orchestra for their Georgia tour this summer. And my goal today in fact is to try to finish the two-piano arrangement so that it might actually be performed by a chorus.

Done, for a ducat! I was hacking my way through the underbrush that clogs the “piano score” at “I will give up sleeping forever, I said,” when suddenly I emerged into what was clearly finished material. Apparently I skipped over the middle part and worked on the ending last summer. Which means, wait for it, I’m done. “Blake Leads a Walk on the Milky Way” is now ready for choral performance without an orchestra.