Fun fact: Did you know that Athens’ sewage system is so ancient that they don’t want you flushing “paper” down the toilet? Instead, there are little bins in which you deposit your used Charmin. (They are emptied by staff.)

After a good night’s rest — finally — we were up early for breakfast. The little restaurant downstairs is lavishly appointed, and the buffet was staggering in its variety. (We’re staying at the Divani Caravel.) But the architecturally unnecessary steps down to the buffet were… disorienting. 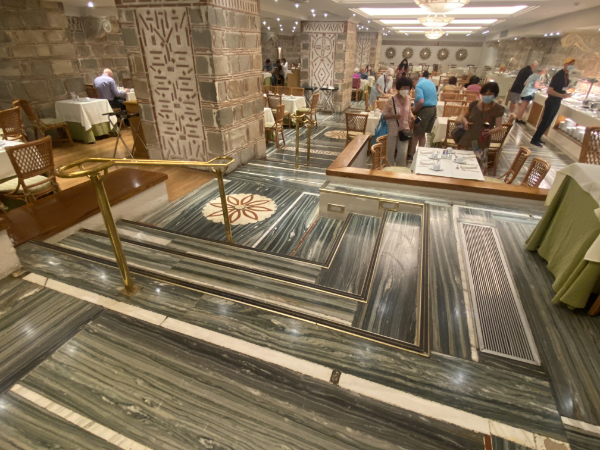 The hotel as a whole is lavish. Here’s the grand stairway leading down to the big halls: 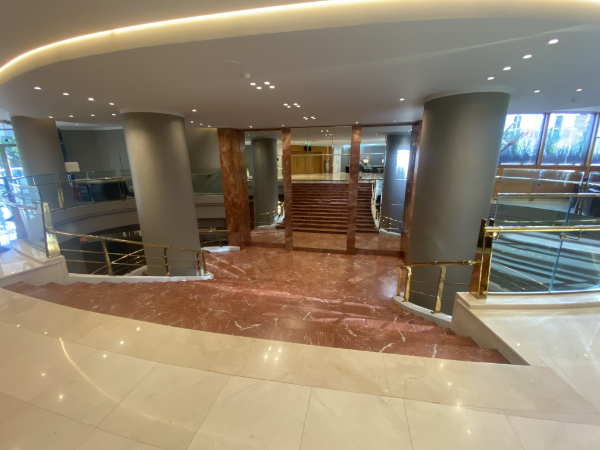 Onto the bus, where our wonderful tour guide Efi greeted us. Today was going to be a bit disorienting for her, since there was a bicycle race through the city and she was not sure where we were going to be to able to go and how we were going to get there. But we set off, past the original stadium built for the first modern Olympic Games in 1896… 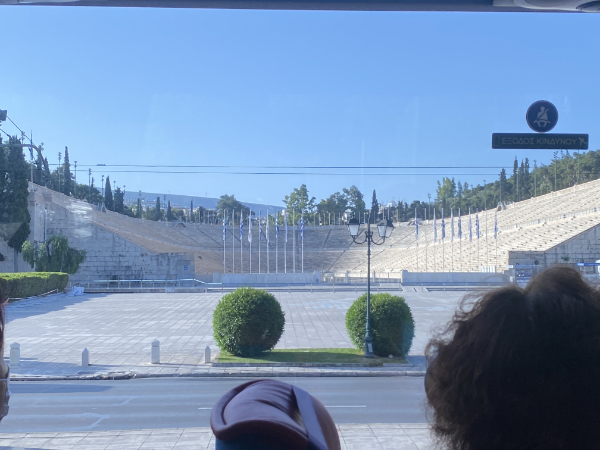 … heading towards the Acropolis. 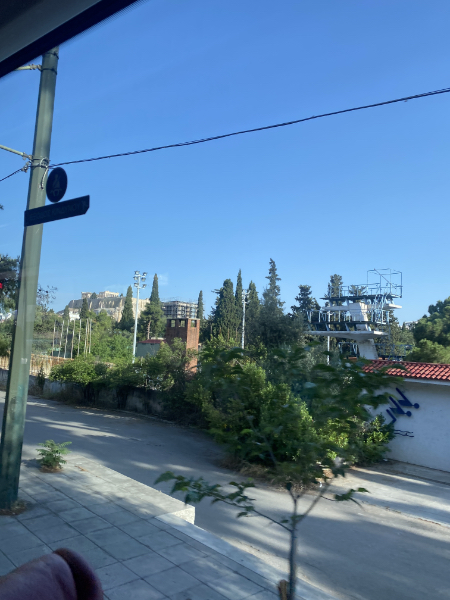 You may as well know now that there is no such thing as too many photos of the Parthenon.

How bus drivers navigate streets that were never built for buses (or for the number of cars used by 5 million people), I will never know. We actually made it past the bicycle race barricades just as they were going up. 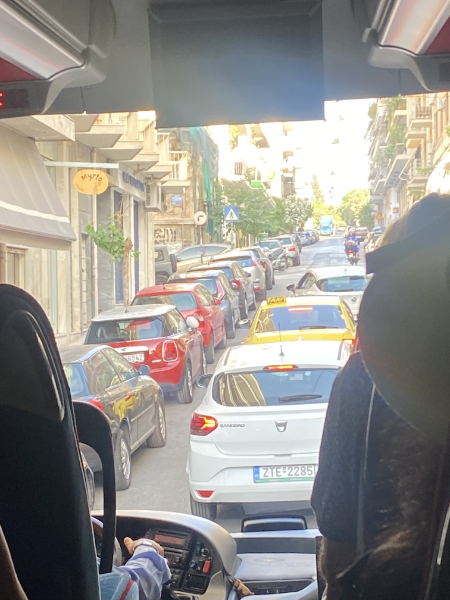 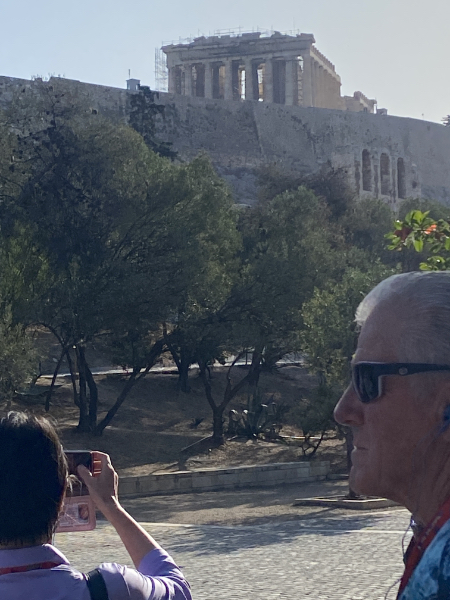 But the views are spectacular. Here’s a monument on top of another mountain, the name of which I didn’t catch. Feel free to inform me in comments. 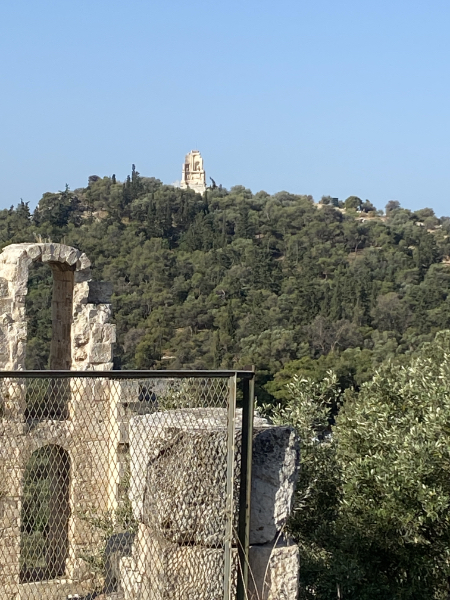 Before you reach the Propylæa, the monumental gates to the Acropolis, you overlook the Odeion, the theatre build in Roman times. 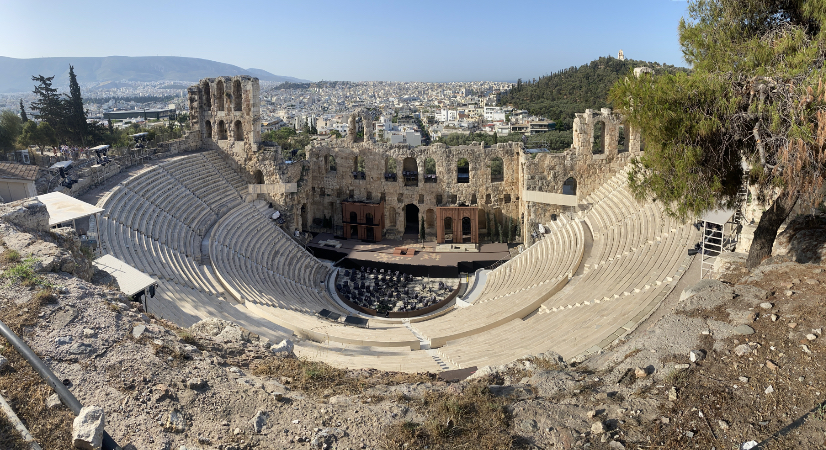 You will perhaps recognize it from Yanni: Live at the Acropolis. Oh yes you do.

Here is my Lovely First Wife, perhaps not understanding that for one’s “death shot” (our term for that photo inevitably used for one’s obituary) one removes one’s face mask. (Although Covid restrictions have been largely lifted in Greece, face masks are still required in certain settings and encouraged in others.) 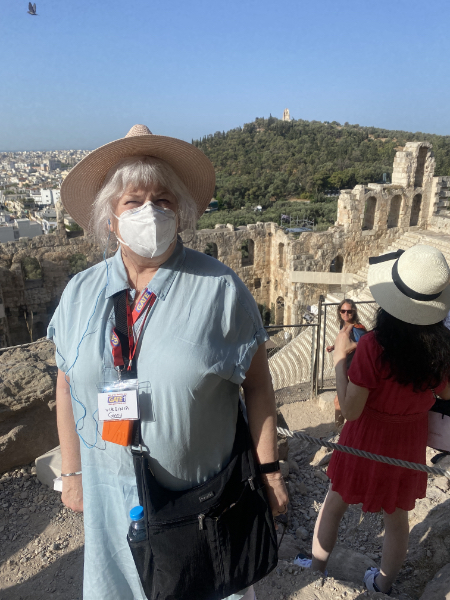 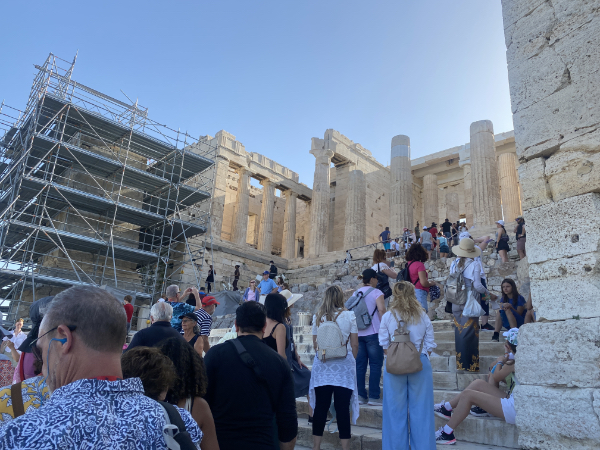 Originally a fortress, a walled city, eventually the Acropolis became a place of temples and worship. The buildings still remaining were built when Athens became an independent, wealthy city-state, and they’re all of marble.

This patch in the wall of the Proplyæa interested me. I am presuming it may have been damage from a cannonball, perhaps. The takeaway is that those who patched it were clearly nowhere on the same level as those who built it. 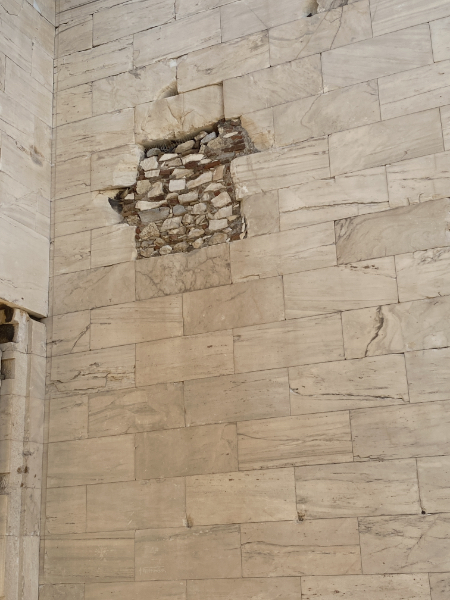 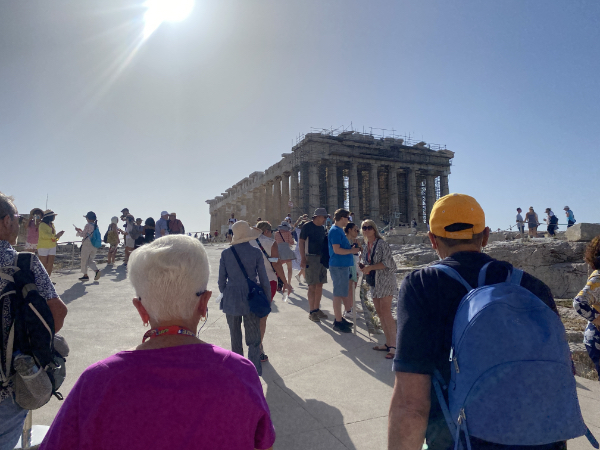 As the couple from Nashville quipped, “Ours has a roof.” 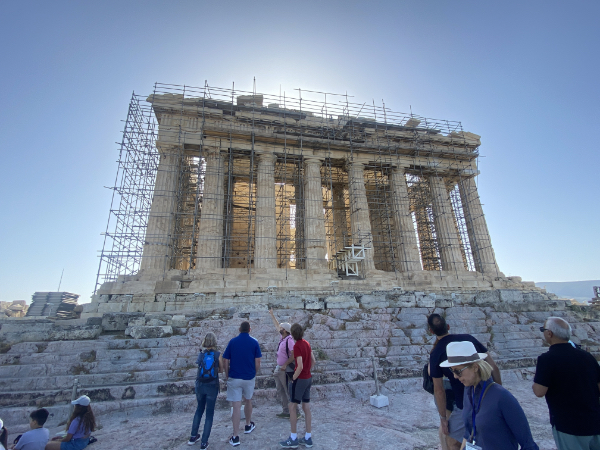 The good thing about getting there early was that it was not quite as hot — temperatures have been in the 90s — and the crowds were just beginning to get there.

The Erechtheion, which I presume you remember from your art history class. 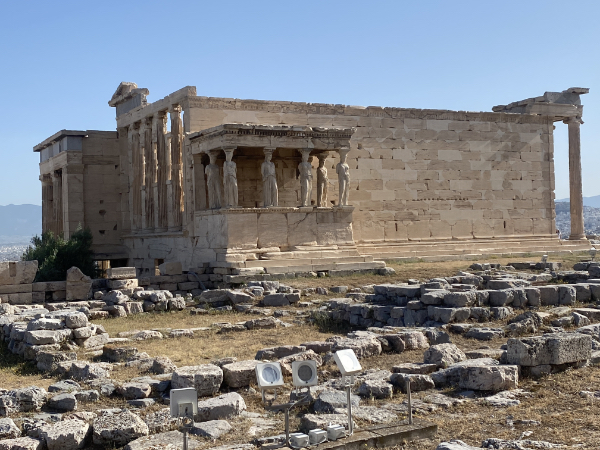 At the other end of the Parthenon, it was astounding to be able to see how not-straight the whole thing is. Every line is slightly curved, mathematically calculated to fool the human eye into thinking it is all straight. 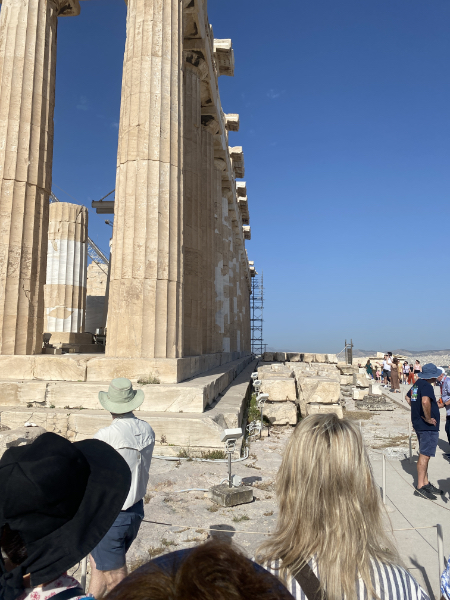 It’s even hard to see in the photograph. You just have to go and see for yourself.

Down below, the theatre of Dionysus. Where it all started. When Proteus says at the opening of A Funny Thing Happened on the Way to the Forum, “The theatre is a temple,” that’s not a joke. (It has always amused me that the two main roots of Western theatre are religious: Dionysus worship in ancient Greece, and the Quem queritas from medieval Catholicism.) 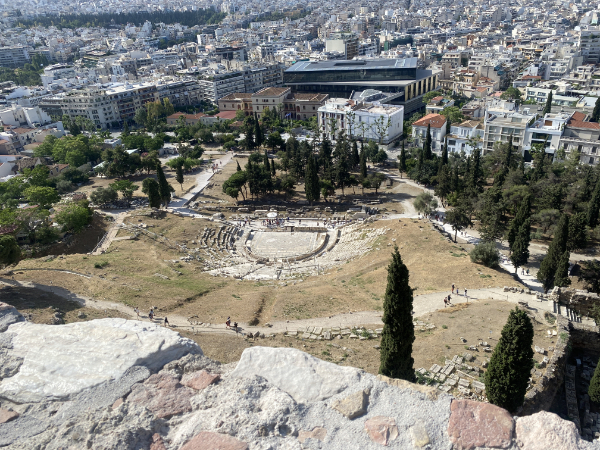 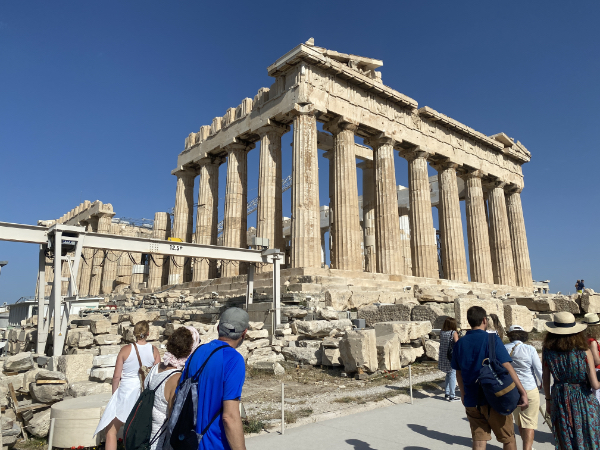 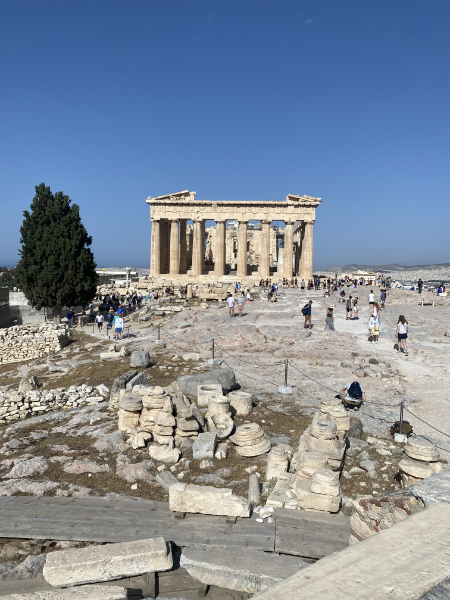 The place is littered with pieces of the past. 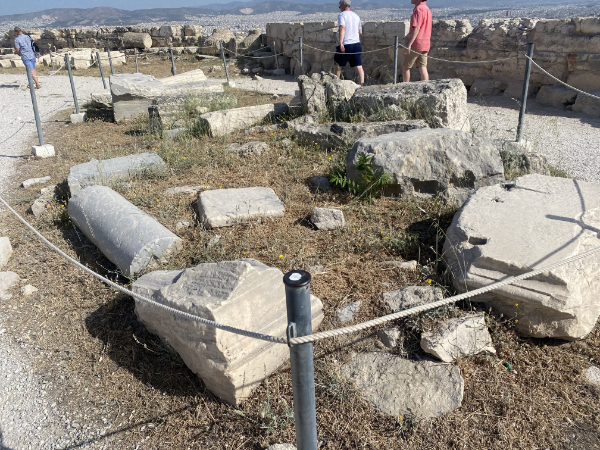 A couples death shot. Yes, I’m wearing a kilt the entire trip; I am definitely the rara avis on this trip. 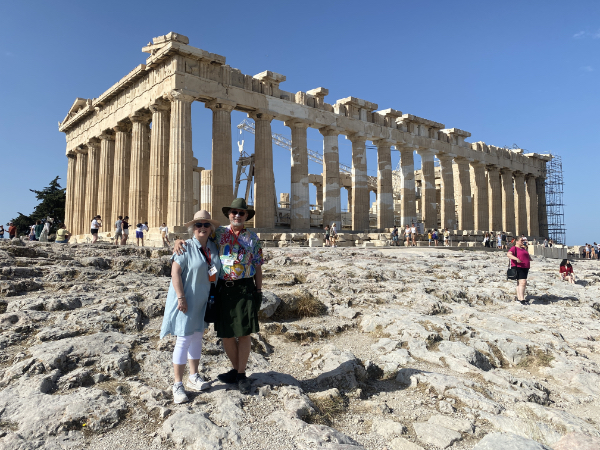 The Erechtheion from the side. I didn’t get a photo, but the wall at the end is still intact and has windows. 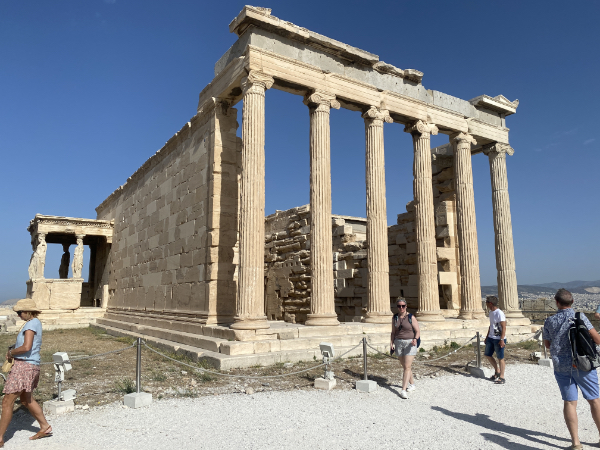 Then it was down the hill to the Acropolis Museum, a fabulous new building. On the way, I kept noticing the letter phi inscribed the marble paving stones. 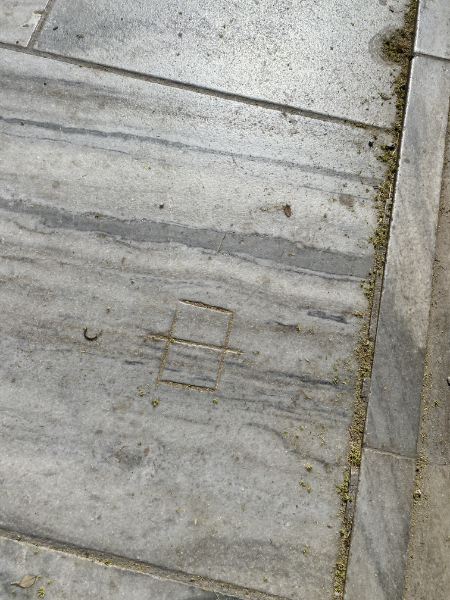 I asked Elfi what it might mean, but she had no answer. I also saw a couple of chi‘s, so they may be just stonecutters marks.

Ooh, and also on the way, there was a private residence whose front doors had these for handles: 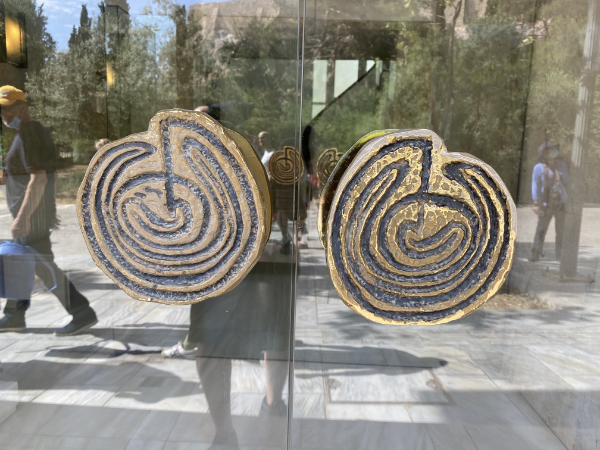 The Acropolis Museum is beautiful, ultramodern. 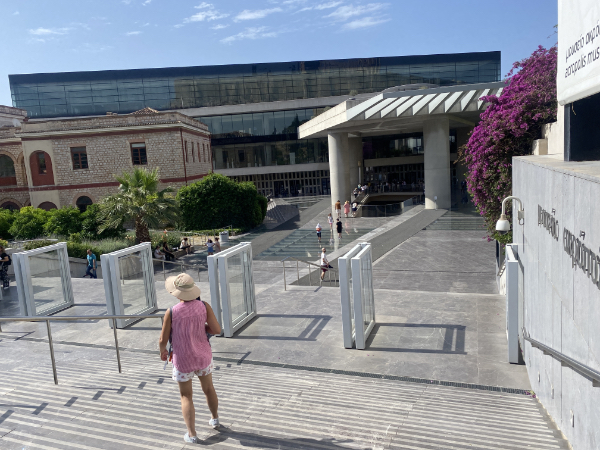 When they began excavation for the new building, no one should have been surprised that they discovered layer upon layer of ur-Athens beneath. Not a problem: the architects pivoted and installed glass floors in the entrance  and first floor so you can see the ruins beneath. (I should have gotten a picture.) 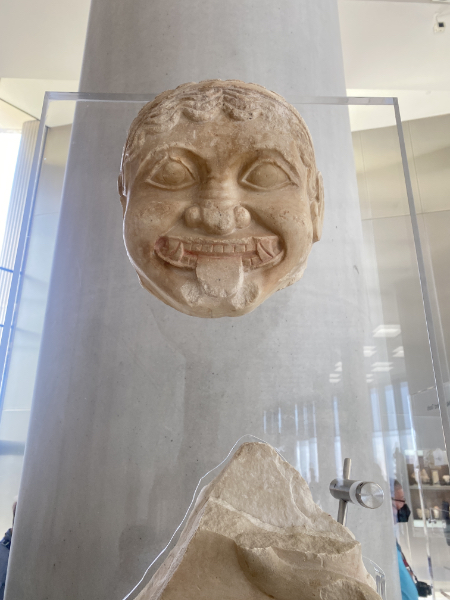 One of the original caryatids from the Erchtheion. They removed all of them, cleaned them of centuries of smoke and pollution, and installed them here. The ones on the Acropolis are replicas. The top floor of the museum pivots to be parallel to the Parthenon and is a replica of its floor plan: It has the same number of columns, and the metopes from the frieze are displayed in the appropriate location. Some are original, but many are replicas of the ones removed from the Parthenon by Lord Elgin. (This is a sore subject for the Greeks.)

The view from the museum: 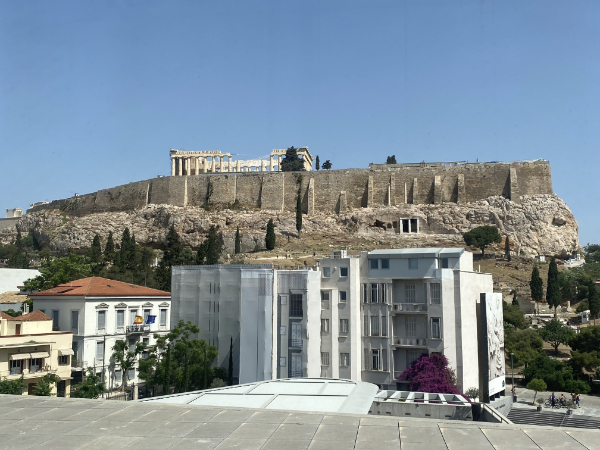 After a nice lunch, we retreated to the hotel and took a nap. Thus endeth the first part of the first day.