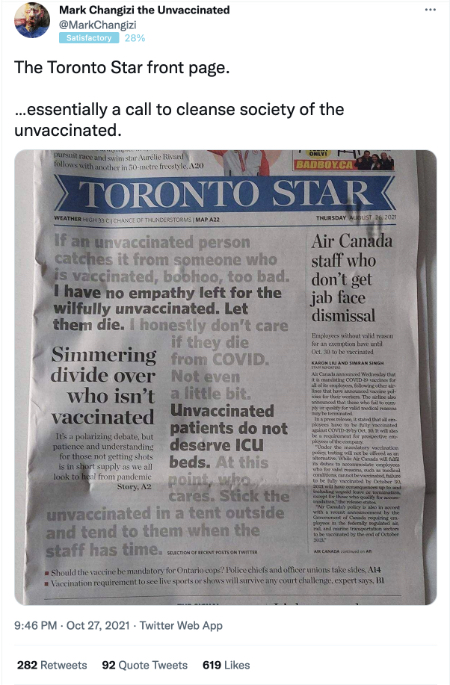 So this was on the Twittermaschine just now (#HoldTheLine was the trending topic), and I just…

Look, I know these people do not have a full command of logical thought, but this is just… I don’t know, velcro that doesn’t stick anymore? Brainworms? Unfortunate result of too much glue-sniffing?

Apparently #HoldTheLine is being used by those brave, brave souls who see mandates for vaccines as what they truly are: SUPPRESSION, KENNETH, OF OUR PRECIOUS BODILY AUTONOMY NOT NOT YOU LADY WHO WANTS AN ABORTION JUST US WITH OUR PRECIOUS BODILY FLUIDS.

Let me say up front that the Toronto Star probably shouldn’t have gone with this approach. Even though I agree 100% with the sentiments expressed, it nonetheless seems antagonistic.

Dude, no. It’s the other thing, the reverse of that. We’re doing everything we can to keep you from catching Covid-19 and dying from it, which is significantly more likely if you are unvaccinated.

He is not alone. Here is one of the responses to his tweet: 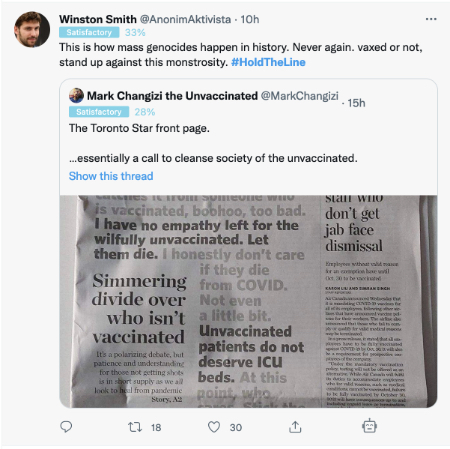 “Mass genocides.” “Never again.” Jebus H. Cthulhu. And brave, brave Winston Smith, standing up to Big Brother, who is even as we speak hunting down the unvaxxed in the streets of Toronto and hauling them off to the labor camps and crematoria of Saskatchewan I guess. Nor is he the only one who responded like this. There were dozens of people shaking their little fists in anger against this Holocaust they definitely didn’t make up in their heads.

WHAT IS WRONG WITH THESE PEOPLE?

Let me say it again for the hard-of-thinking: WE ARE NOT TRYING TO PURGE YOU IDIOTS. WE’RE TRYING GET RID OF THE VIRUS, and we can’t do that if y’all insist on refusing the vaccine because [reasons]. The more y’all get sick, the more likely it becomes that those of us who are vaccinated will suffer a breakthrough infection. Not only that, but the longer y’all remain unvaccinated, the more likely the virus will use its free access to your precious bodily fluids to mutate into yet another variant. You’re plague dogs.

Has our empathy for the willfully unvaccinated who are sick with this pernicious virus worn thin? You better believe it. At least we had empathy to start with, unlike your obvious lack of empathy for those who cannot get vaccinated because of health issues. But do we wish death on you? No. We wish you’d get vaccinated.

And maybe some mental health counseling.

Also too: The Sociopathic Style in American Politics