This post is late, because our Friday was a late night with many fabulous cocktails, so it might have been a little too hard to get it done on Saturday morning, what with travel and flight and stuff.

On Friday, we began by going across the road to the College of the Atlantic to snag breakfast at their café, which was not open because they’re not in session yet. This campus focuses on human ecology, and it’s lovely. 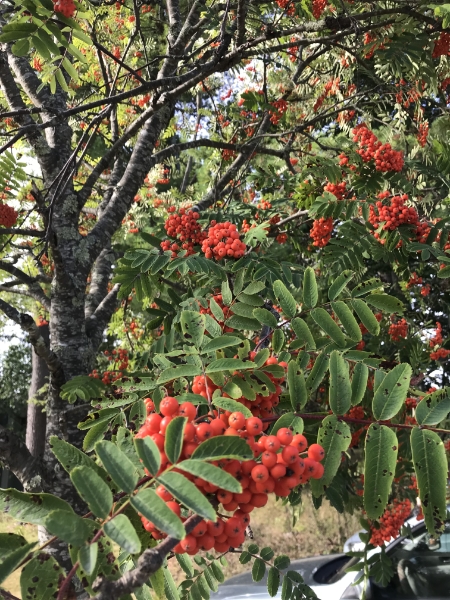 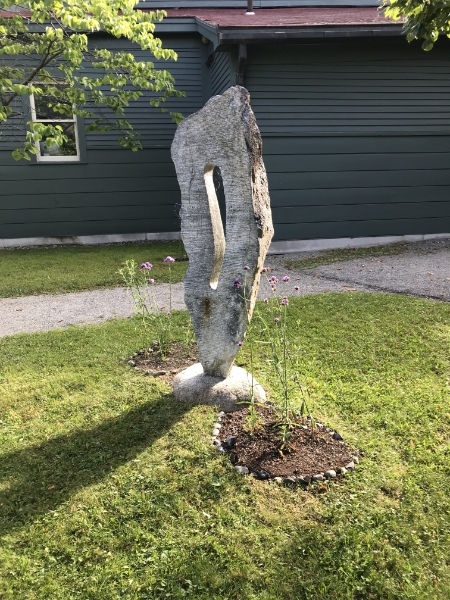 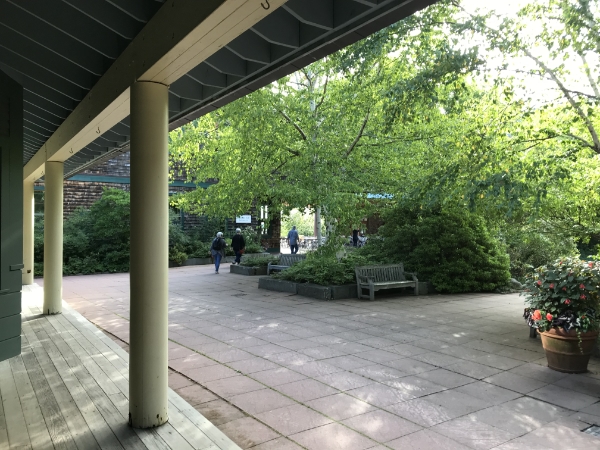 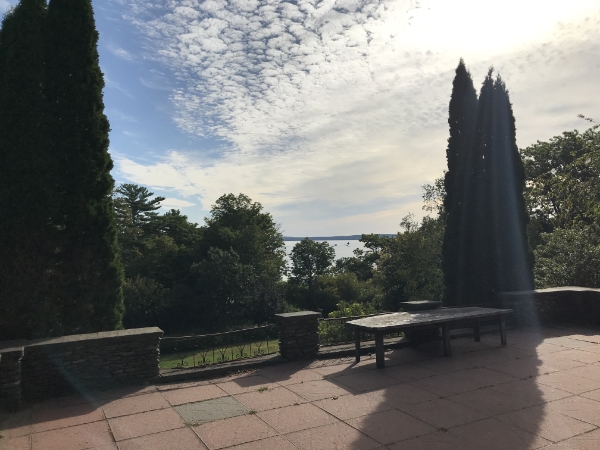 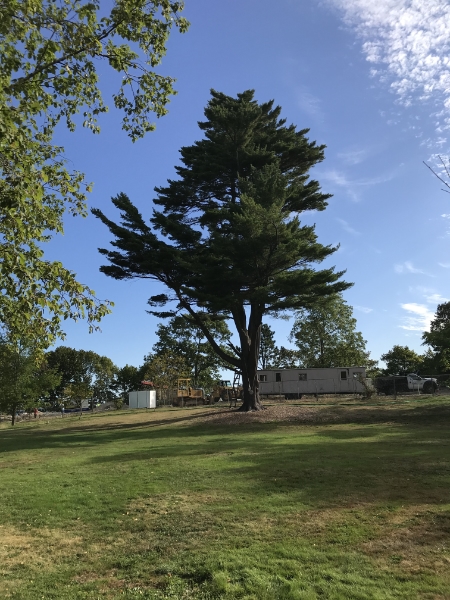 I made some notes for when I win the lottery and build the Lichtenbergian Retreat Complex.

We then made our way to Acadia National Park. 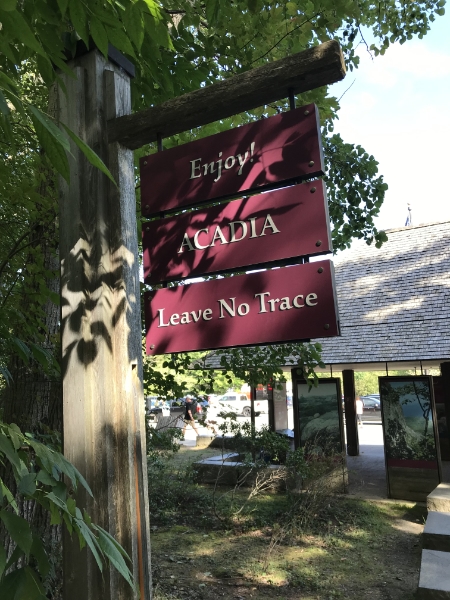 Acadia is the only National Park in the northeast, which is odd I think. It sprawls across several islands and contains multiple features of interest. There are shuttles there, just like at Grand Canyon, so we hopped the Loop and rode it straight around. Because we were on a tight time schedule, we didn’t hop on and off. Instead, we noted where we’d like to visit, then drove back there.

One of those points was the Wild Garden, where volunteers have created a small garden with different areas representing the differing biomes in the park: conifer forest, bog, pond, roadside, etc.
I was there for the ferns. I will now bore you with multiple photos of ferns. 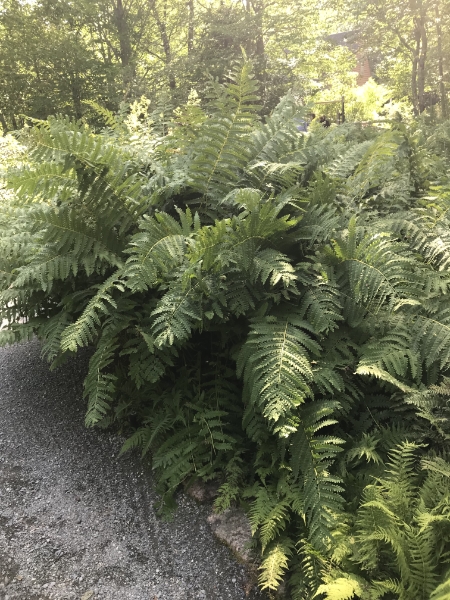 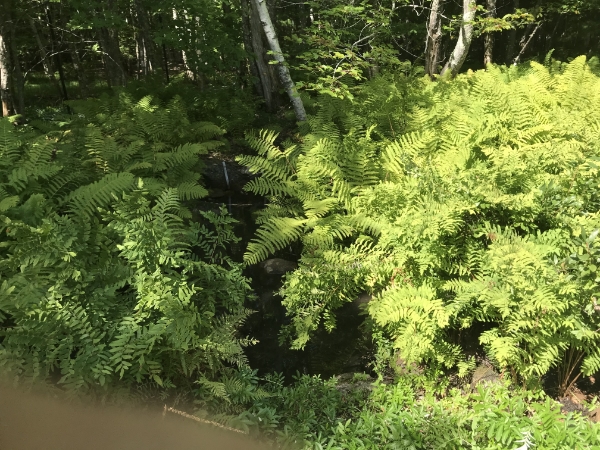 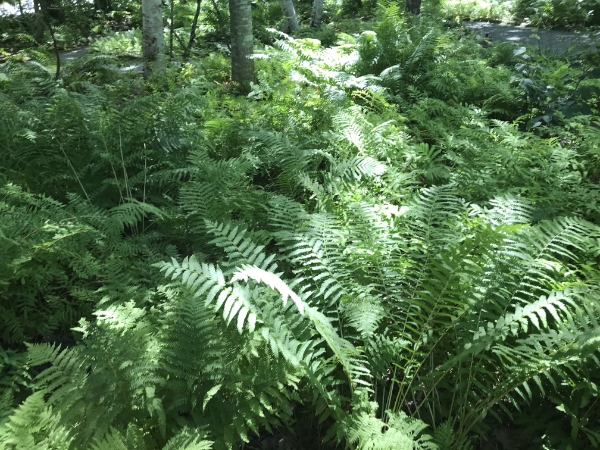 There were other plants, of course. 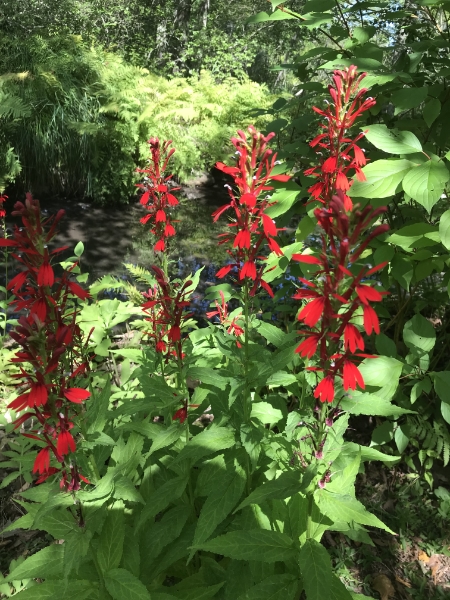 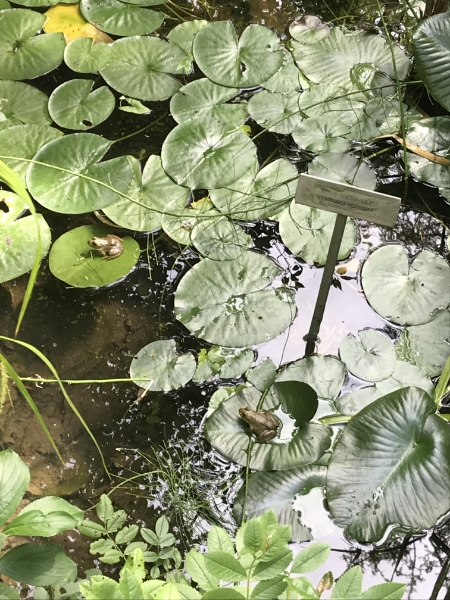 One of the attractions of the park is Sand Beach. “Sand” Beach, I hear you ask? Yes, of course: New England is not known for its pristine white beaches, and this place is an anomaly. In fact, it’s the only one. Its cove has a rocky island blocking the ocean’s full access, and so the surf has pounded shells into sand which has accumulated like it does normally elsewhere in the world. 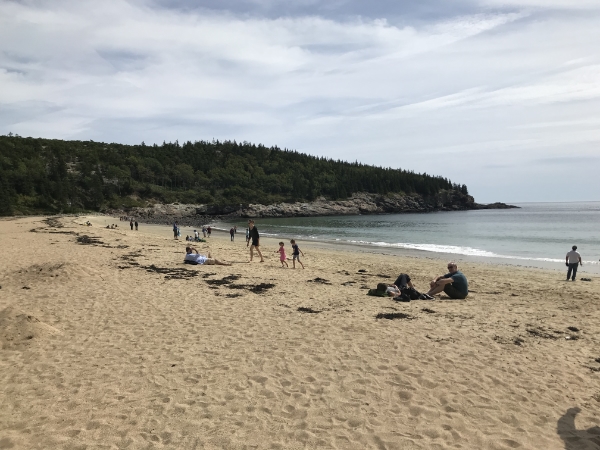 Not pictured: a group of children in bathing suits frolicking in the freezing water. Mainers, amirite?

(In creating this post, I found on the official park website that Sand Beach and Thunder Hole (a tidal thing) were closed that very afternoon because of the storm surge from Hurricane Dorian. We escaped just in time, apparently.) 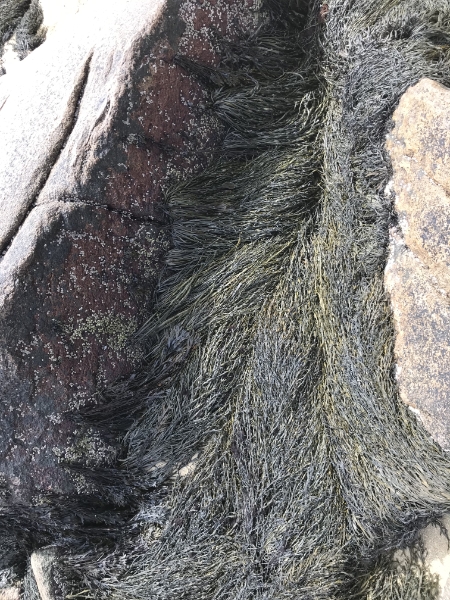 We then drove to the peak of Mount Cadillac, the highest mountain east of the Mississippi.

It was stunning. Like Grand Canyon, there’s nothing to keep you from plunging to your death if you’re an idiot. The views are spectacular: rocky coast, islands, Bar Harbor.

The plants are already getting ready to go for fall. 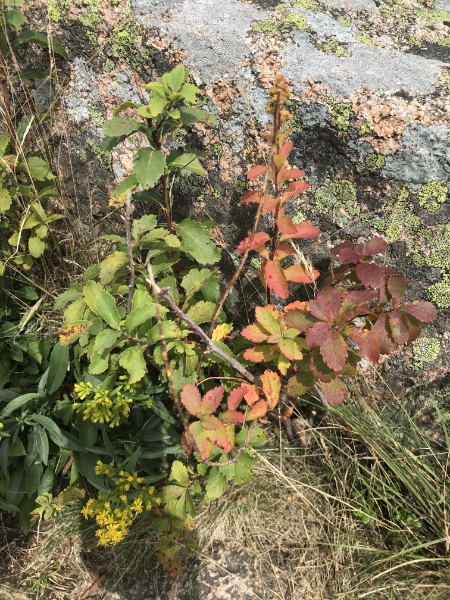 Maine is not called the Granite State for nothing. I liked the lichens. 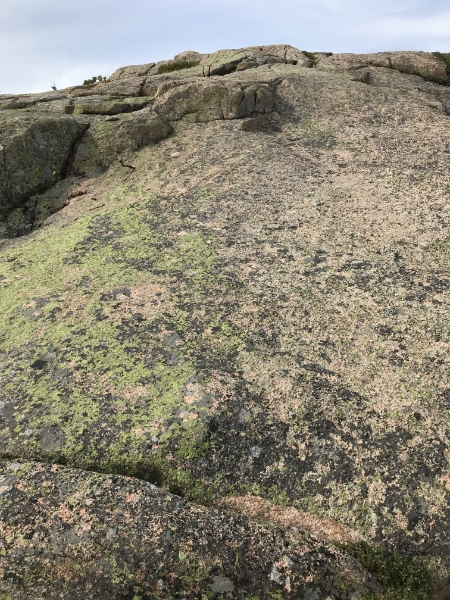 Finally it was time to head back south. Normally we would have snagged a hotel room online during lunch, but we skipped lunch while we clambered around Mt. Cadillac—snacks only—and so we found that it was harder to find an affordable room on the road mid-afternoon. We had planned to return to Portland (there was a distillery I wanted to visit), but we ended up in Augusta, the capitol, at the comfortable—if kitschy—Senator Inn.

A capitol city, bustling with attractions and nightlife, right? You are thinking of Atlanta. Augusta is not that.

We did our research on where to eat and ended up in Hallowell, a small community right on the other side of Augusta. The Liberal Cup is a foodie place posing as a brewpub, and the meal was delicious. I especially appreciated their cocktail menu:

We asked our waitress where she would recommend for music and cocktails, and she immediately said, “The Maine House: Leah makes the best cocktails in town.”

First of all, it was tiny, it was crowded, and it was fabulous. There was a duo up front playing all the top 40 covers—my Lovely First Wife sang along to all of them—and the cocktails… Leah is a genius. 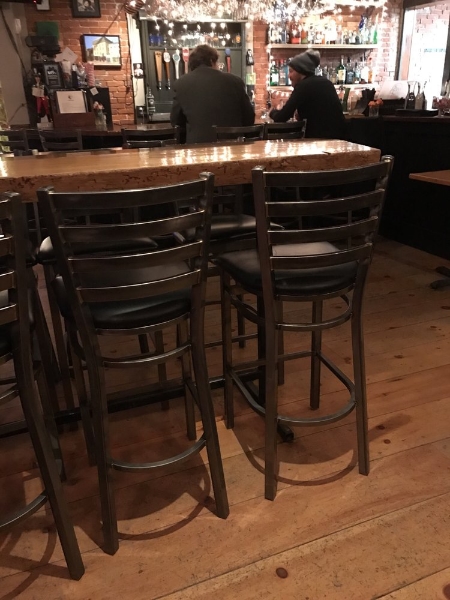 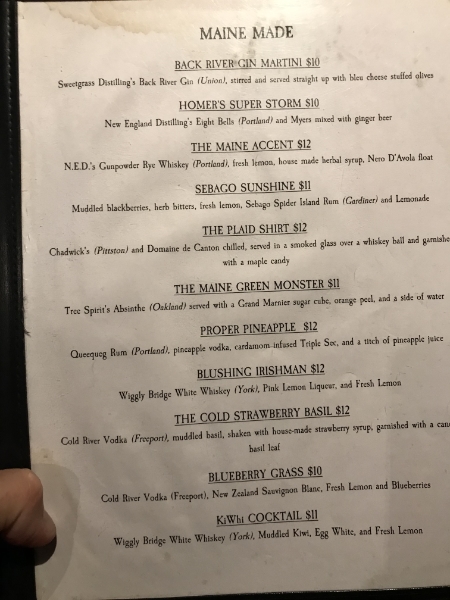 The Plaid Shirt is one of the best cocktails I have ever had, and everyone else was in heaven with their choices as well.

The duo up front took a break, and we strolled around Hallowell (it’s only a couple of blocks long) looking for our next good time.

Hallowell is our kind of place. This was on the wall on one of the buildings: 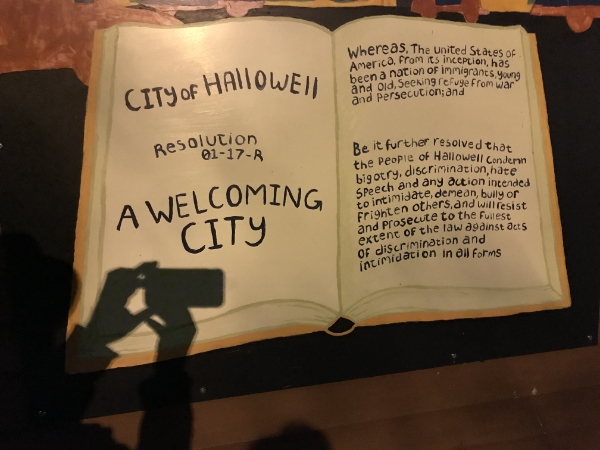 And this is what they do for fun: 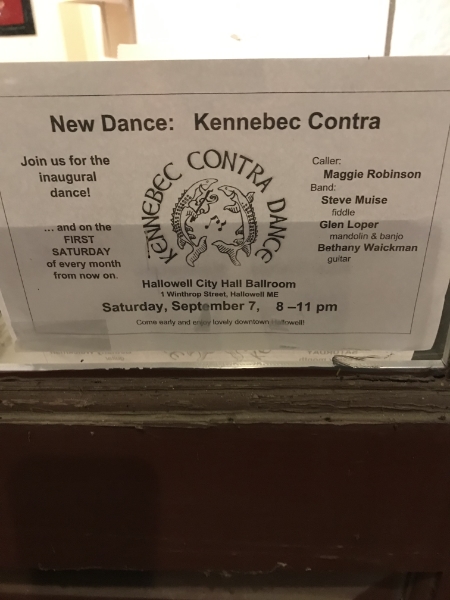 If you don’t know what contra dance is, think Jane Austen movies. As I said, my kind of people.

By some schedule unknown to us the musicians at every single place were on break, and we decided we would head back to downtown Augusta and check out the night life there.

We headed specifically to The Oak Table & Bar, right there on State Street past the Capitol. 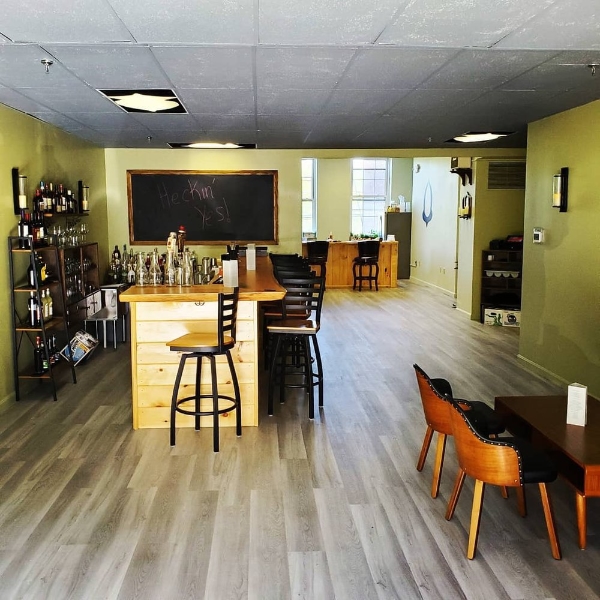 There we encountered Kyle, another genius. Tall, still athletic—he was ranked 37th in the nation as a lacrosse player in high school—and voluble, he made fabulous cocktails while we grilled him on how he got to where he is. Cool story: in the service, his buddies paid for him to go to bartending school because of his skillz. Out of the service, he was considering a 6-figure career in security consulting, but then had a son, now three years old, and he made the decision to stay home instead. We loved him.

By the time we emerged, Augusta had turned out the lights. We were literally the only car parked on the street.

We slept, we rose, we breakfasted, we drove to Portland, and we flew home. The end.