It’s still Wednesday, and I’m somewhere over the North Atlantic. Evidence of Hurricane Florence is not yet apparent. Here’s the view from the plane’s camera: 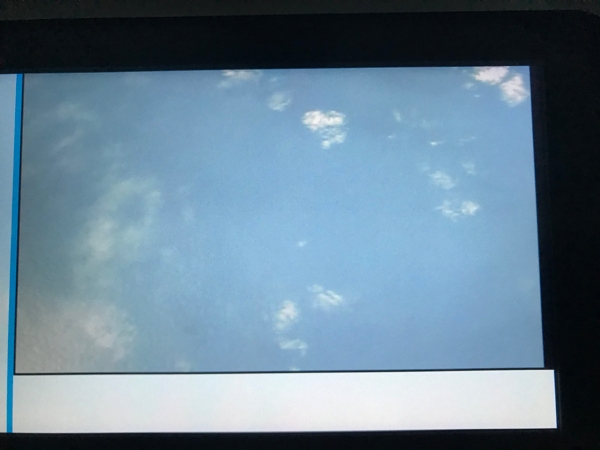 [update: as we approached Hartsfield-Jackson, we flew over the property where Alchemy will be held — I got to see my domain from above!]

Pretty spiffy, but there is no wifi on this 777, and the USB port doesn’t seem actually to charge anything—it’s just for you to “work with your USB files,” whatever that means.

So, Saturday in Rome. First up, the Forum. Actually, there are two Fora: the Imperial Forum… 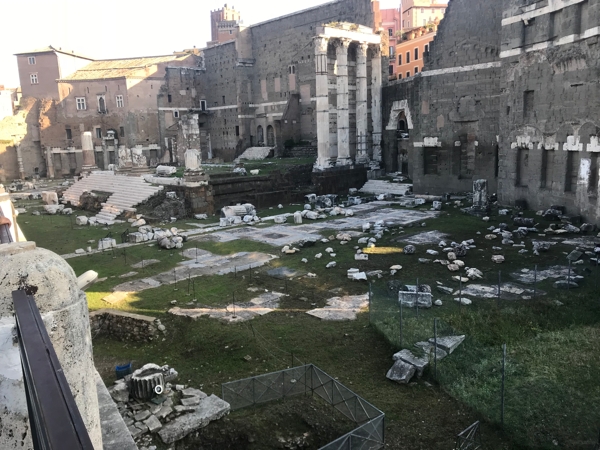 …and the Roman Forum: 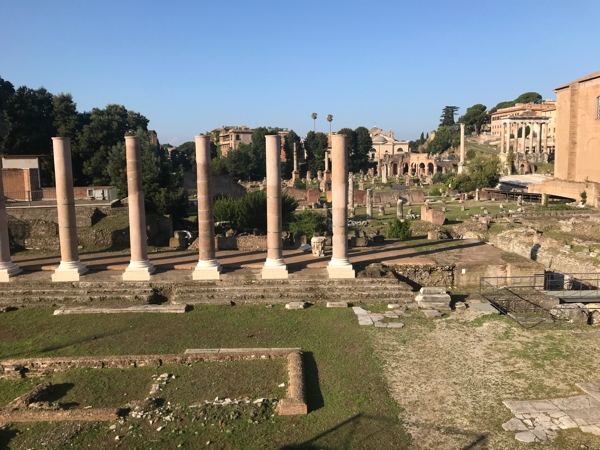 Like you, I had always presumed that after Rome fell, the Forum just kind of hung around being ravaged for spare parts (“a Lego set,” as Susanna put it). But no. Sure, some of it got taken apart and used for churches and other buildings, but mostly it was completely buried until the 17th century. 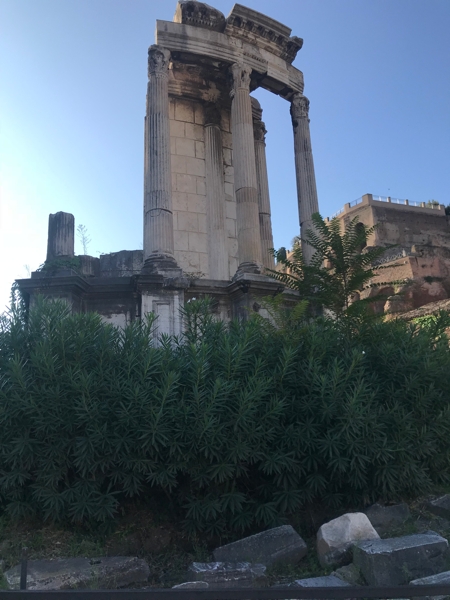 Then it was excavated, ravaged for spare parts, and hung around. Mussolini had it further excavated and protected, and the excavation continues today. (The Imperial Forum is under excavation as we speak.) 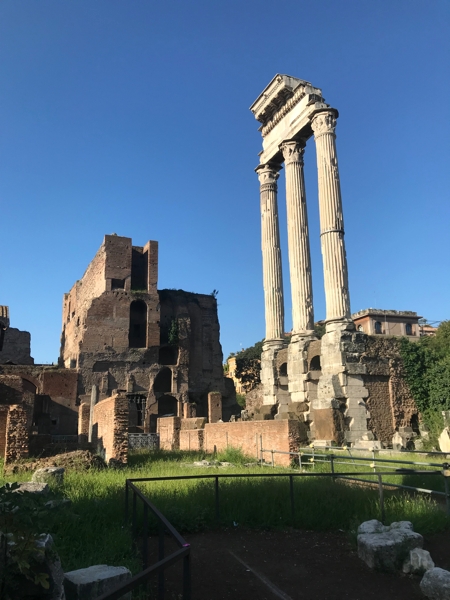 Here’s a temple with a church inside it. 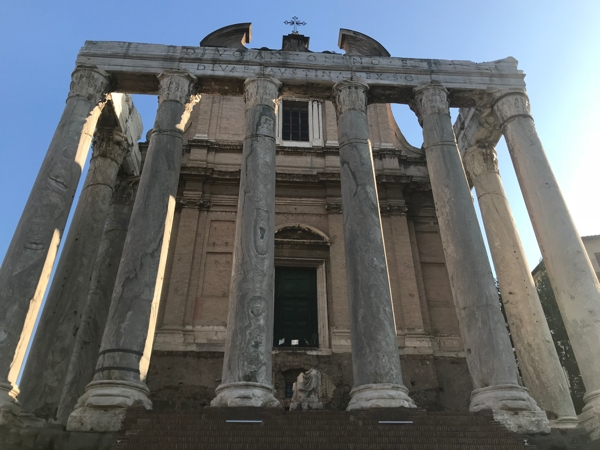 The Christians tried to tear the temple down, with all its bad pagan juju and all; you can see the scars on the upper parts of the columns where they tried pulling them down with ropes—to no avail. So they built the church inside the temple. 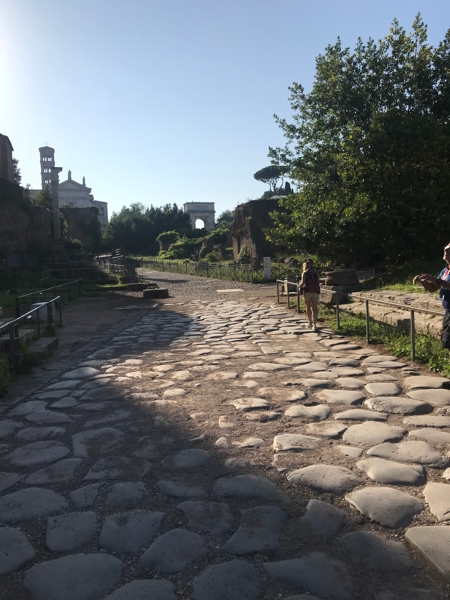 The Christians left this triumphal arch up… 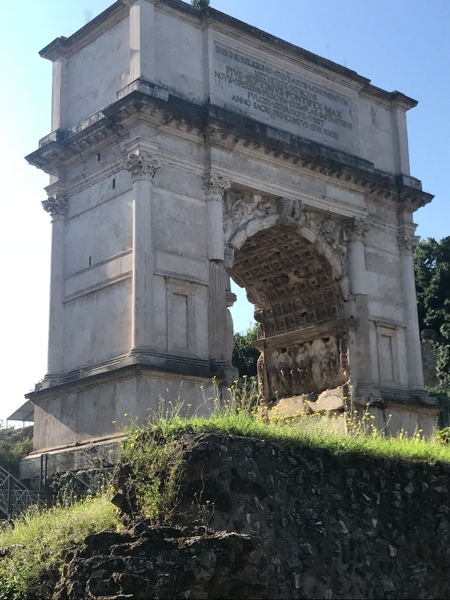 … because it memorialized Titus’s sack of Jerusalem in 70 AD and was thus tangentially connected with Jesus. You can see the parade featuring the menorah and other spoils of war from the Temple.

From the Forum, we hit the Colosseum: 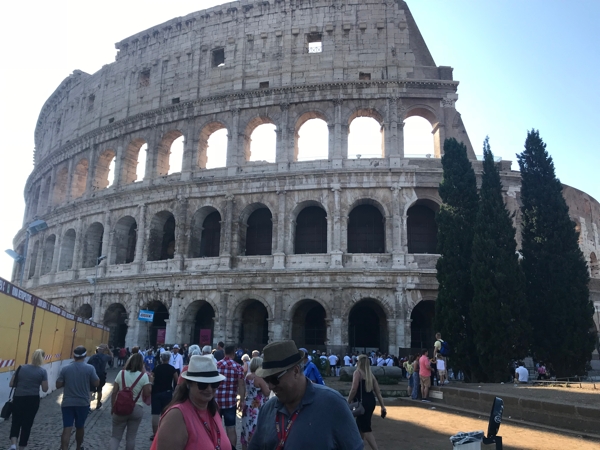 It wasn’t called the Colosseum by the Romans. It was just the Stadium. But it is colossal.

The original floor was dirt, but it was soon excavated and covered with a removable wooden floor. At first the floor could be removed and the pit flooded for reenactments of famous naval battles (or at least the ones the Romans won)… …but that was expensive and wasn’t as big a draw as the violent entertainments, so an entire underground complex of dressing rooms, cages, and trapdoors with elevators was built. Susanna’s narration made the deliberate cruelty of the culture too painful to listen to.

The gladiators had a training arena and dormitories across the street, connected by a tunnel to the stadium (the triangular opening). They were cosseted, since they were critical investments, and they made extra cash by leaving their bedroom doors unlocked for anyone who wanted to spend the night there “discussing philosophy,” as Susanna put it.

Here we all are, outside the Colosseum, where one of our party tripped and fell. It was serious, a broken radius and ulna, and while we paused for triage, a bride in full regalia came quickly across the street, followed by an attendant and a photographer. Suddenly we were in a Fellini movie. (You can barely see her white-veiled head to the upper left of our crowd.) 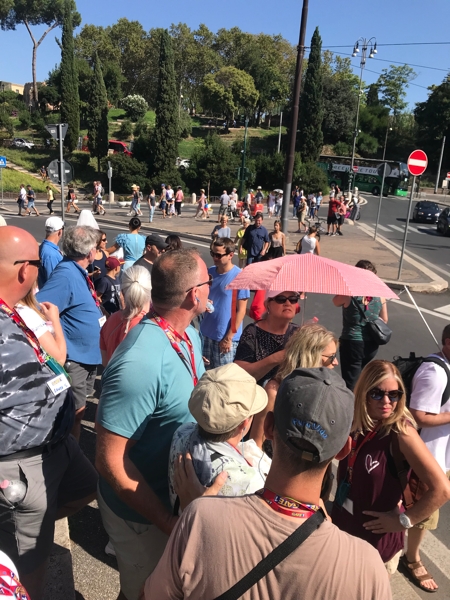 Up we went to the church of St. Peter in Chains, because Susanna is something of a Michelangelo freak and she wanted us to see the work he considered his best: Moses. 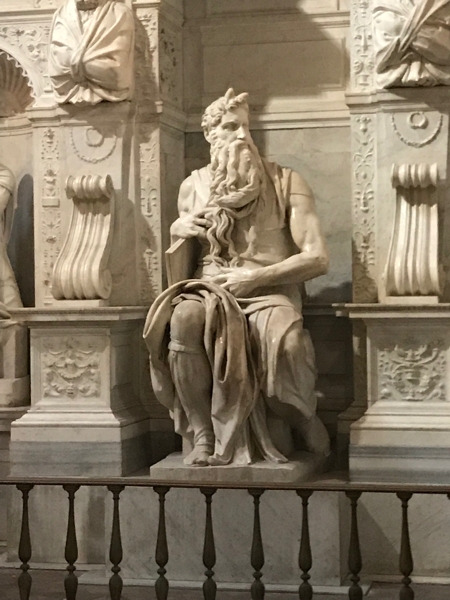 Remember the unfinished “slaves” from Julius II’s tomb? This where Julius finally ended up, after bickering between his successor and his family over his final resting place. It’s not quite as grand as his original commission of a grand pyramid with 44 sculptures by Michelangelo. 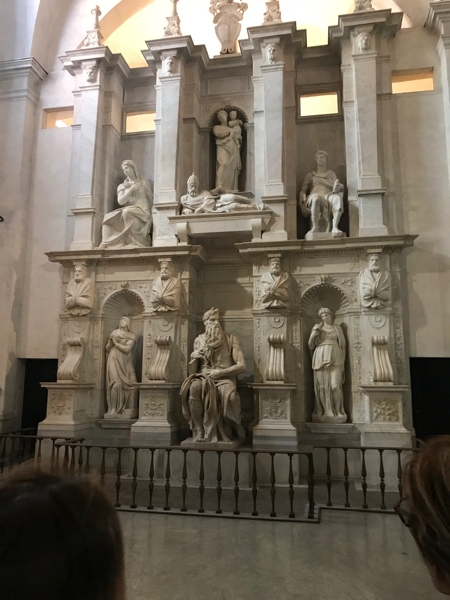 And here you see the great Julius in his final repose. 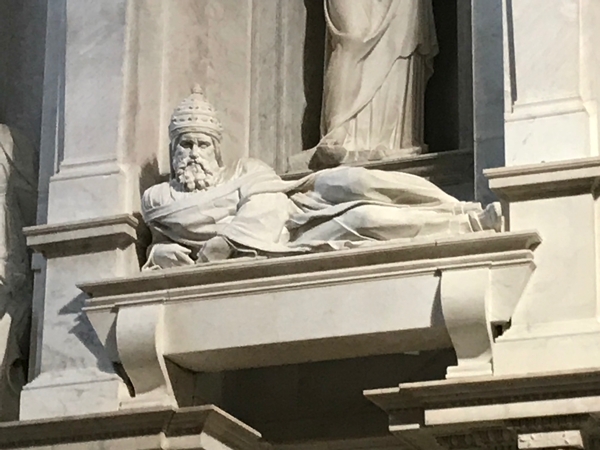 Well, hello, sailor. It is otherwise a pretty restrained church… …except for some of the chapel decorations, like this one: 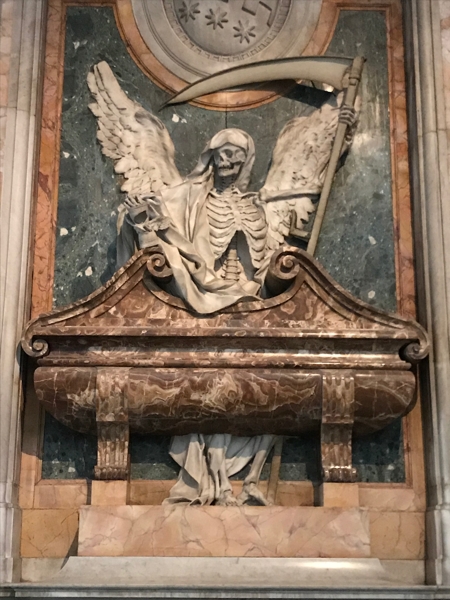 After that we were left to our own devices, so we moseyed around until we found a café with a great name: 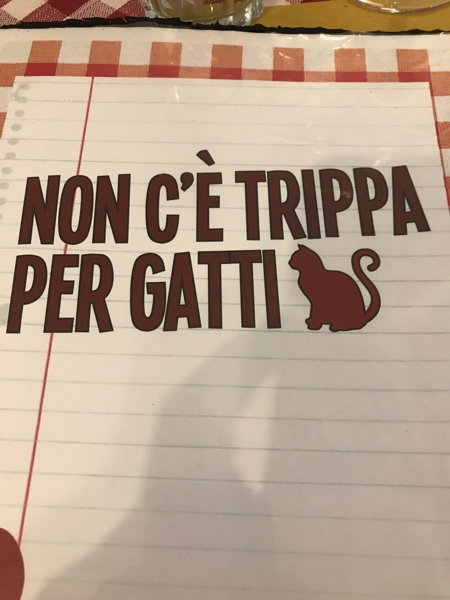 We thought it meant “Don’t Trip Over the Cat,” but it actually translates as “No Tripe for Cats!” Food was good, too. But even better was a place our tour manager Ignazio told us about, Grezzo/Raw Chocolate. They do not cook their chocolate, only dry it and grind it. The result is a gelato to die for. I had a double scoop of chocolate and raspberry: Ignazio had advised us all to head back up around the Colosseum to get a front view of the Victor Immanuel Monument, but we decided to head in the opposite direction to St. Maria della Vittoria. On the way, I was ordered take this photo, because it just seemed impolite to the memory of Chirico not to: On the way, we found one of the disappointing stationery stores — although I did buy some brown inks — and a fountain, seen here from a distance: 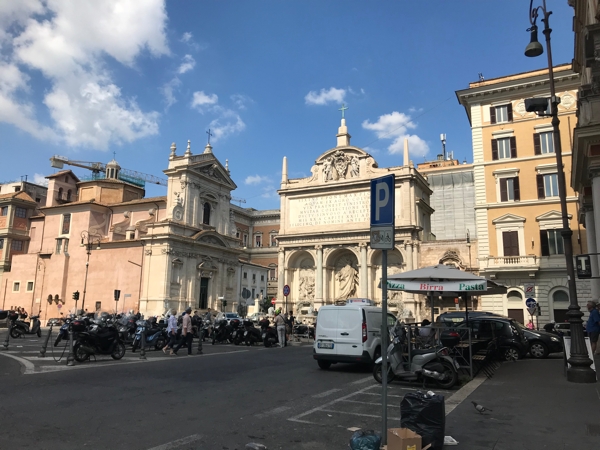 It featured four copies of our old friend, the kitty from the Vatican… 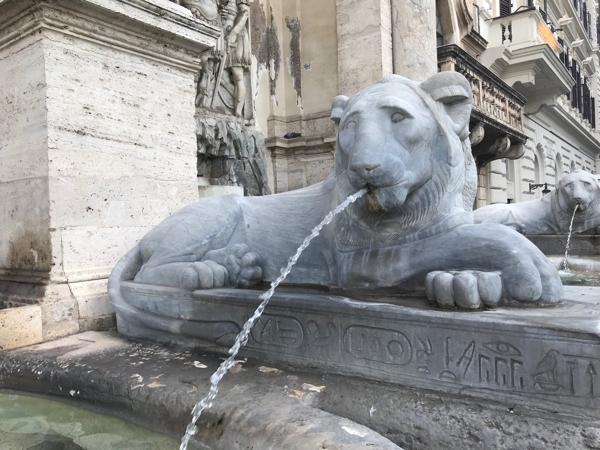 … and a somewhat less than imposing Moses. 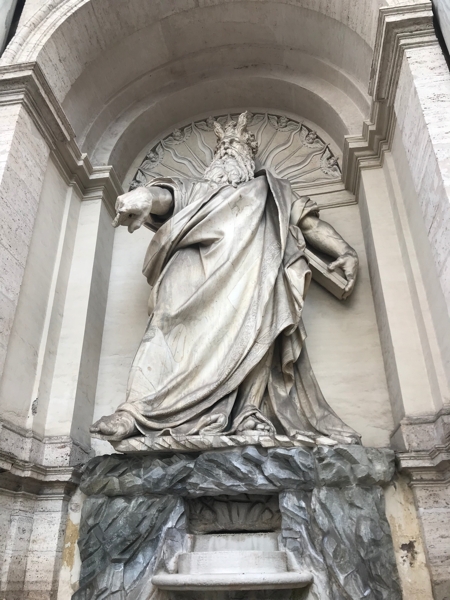 He looks more like a Peter Max version of Odin or something. (The horns thing comes from an early mistranslation of the original Hebrew text describing Moses returning from Mt. Ararat with the Commandments: his head was said to radiate beams of light. St. Jerome mistook the word for “animal horns.” Mistakes were made.) 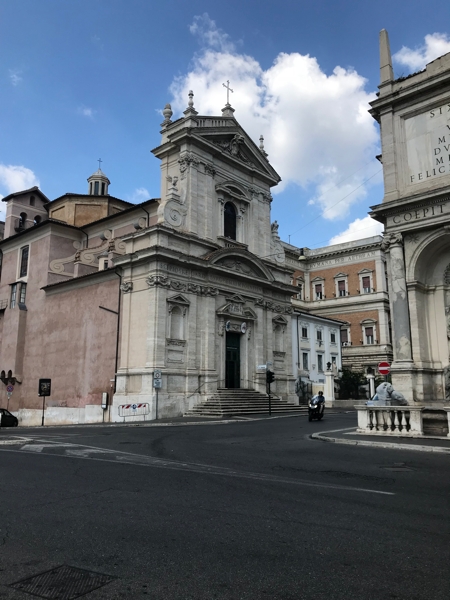 I thought at the time, and Wikipedia confirms, that it looks an awfully lot like (“inspired by”) the church of St. Susanna across the street, guys.

I don’t know that I would have built my shamelessly stolen design right across the street, but maybe mores were different back then?

And here’s the inside: 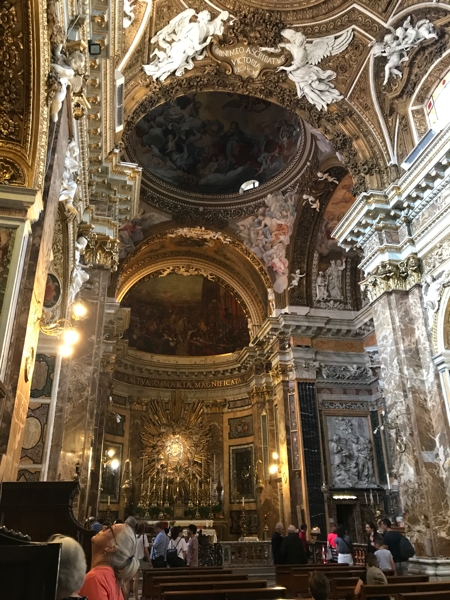 It has a cool architectural trick: little domes over the chapels that allow sunlight to streak in. And the reason we trekked all the way up there: 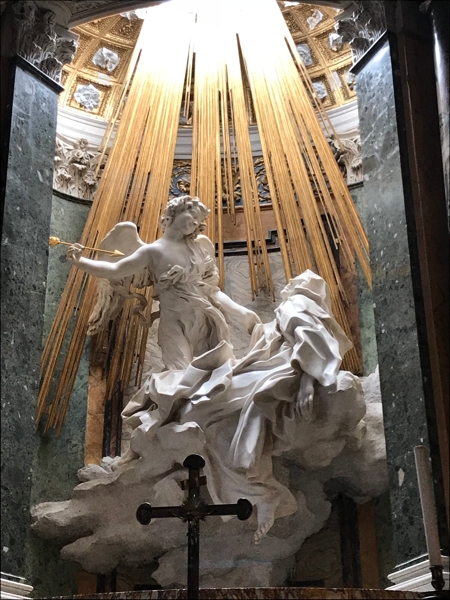 The Ecstasy of St. Teresa, by Bernini. We see the moment of Teresa’s description of being pierced by a flaming dart at the hands of an angel, and she knew God. Here’s what she said in her autobiography:

I saw in his hand a long spear of gold, and at the iron’s point there seemed to be a little fire. He appeared to me to be thrusting it at times into my heart, and to pierce my very entrails; when he drew it out, he seemed to draw them out also, and to leave me all on fire with a great love of God. The pain was so great, that it made me moan; and yet so surpassing was the sweetness of this excessive pain, that I could not wish to be rid of it. The soul is satisfied now with nothing less than God. The pain is not bodily, but spiritual; though the body has its share in it. It is a caressing of love so sweet which now takes place between the soul and God, that I pray God of His goodness to make him experience it who may think that I am lying.

Teresa’s robes float and writhe with her, and Rome was so stunned and enthralled that Bernini’s style was immediately copied all over Europe.

After Teresa, my LFW and I then went on a private mission to find what the guidebook said was the mother of all stationery stores in Rome. On the way, we came across the Spanish Steps again, this time from the top: 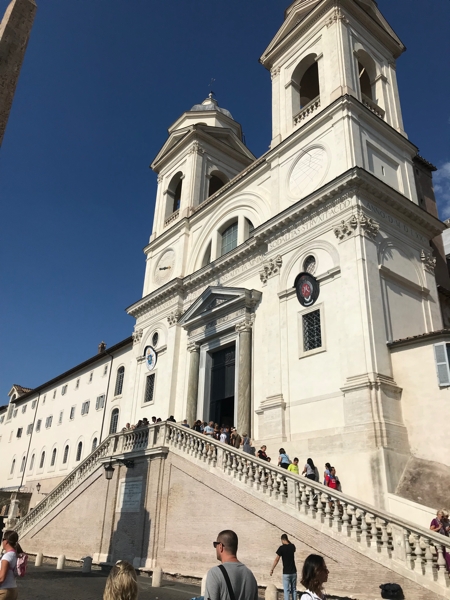 It’s pretty high up. Thank Caesar we were going down. 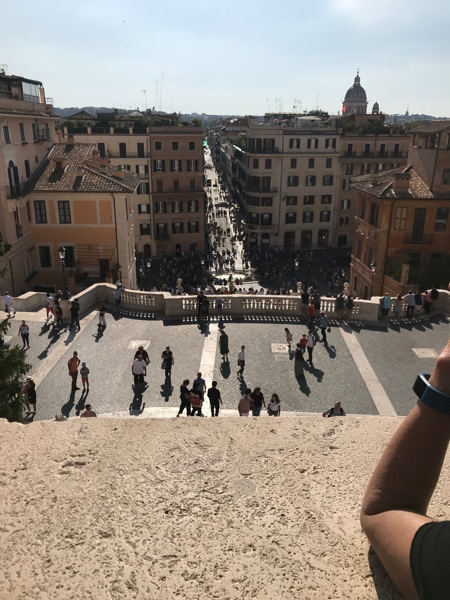 The celebrated stationery store was a complete failure, little more than place for Moleskines and Rhodias. Sure, it had more notebooks than that first store, but there was nothing there that I couldn’t buy in Newnan. Ugh. We took a cab back to the hotel, showered, and joined the tour for a dinner followed by a bus ride around Rome at night, and we did get to see the Victor Immanuel Monument: 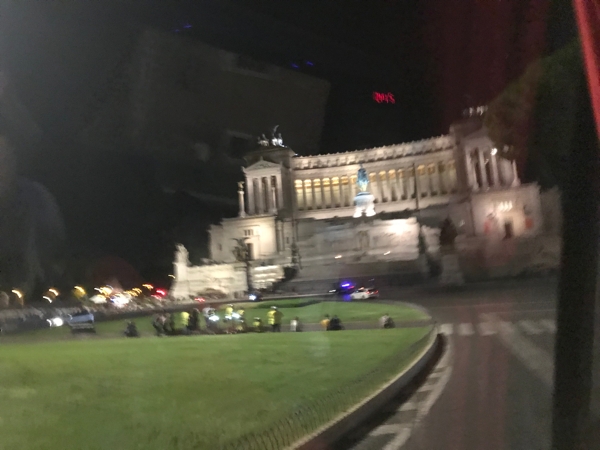 Only a couple more days to go, and three hours more in the air—we can do this!