Sunday, September 9: We hit the bus and head down to Pompeii.

We only had about an hour and a half in the ruins, and our tour guide was not very good, so this is a pitiful overview of the place. We all knew the basic story, and Maria (I think was her name) never checked our level of knowledge before telling us what we already knew. Bad teaching, and equally bad docenting, if that’s a word. 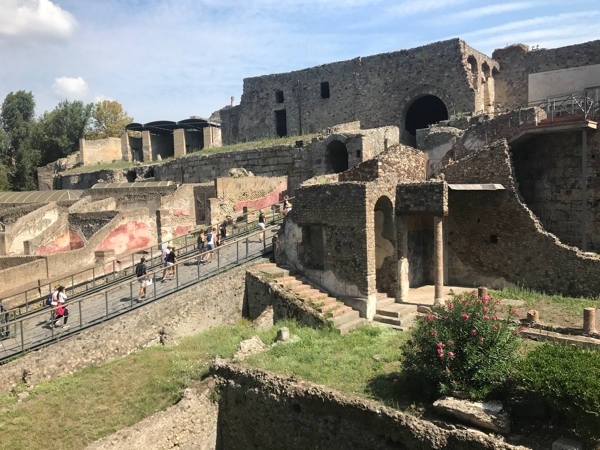 Someone in the group said they saw Sam Waterston leaving as we were coming in. Might have been fun to say hi to him and remind him that for a season or two of I’ll Fly Away, we were practically neighbors.

It was quite hot that day — it was warm most of the trip — so watching our step and avoiding the other tourists became very wearing.

Here are the remains of a private home: 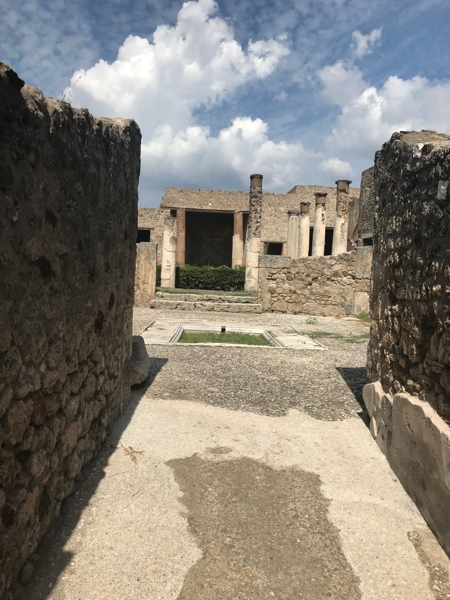 You can tell it was a private home because it had a pool and marble columns, Maria said. She offered no other details, such as how the family occupied the space.  Oh well.

Here’s a bronze that I thought was a bit avant garde for 79 AD: 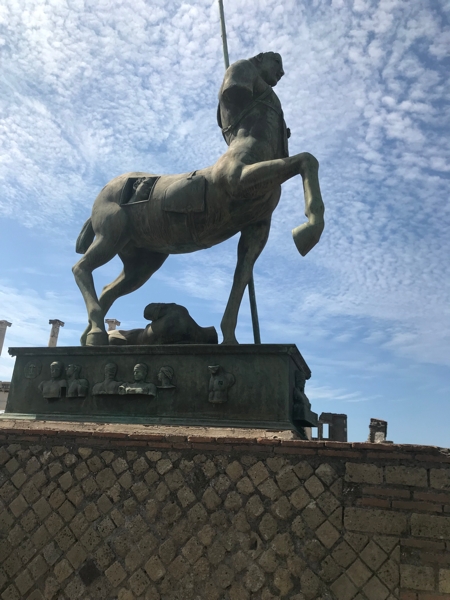 Especially when you look closely: 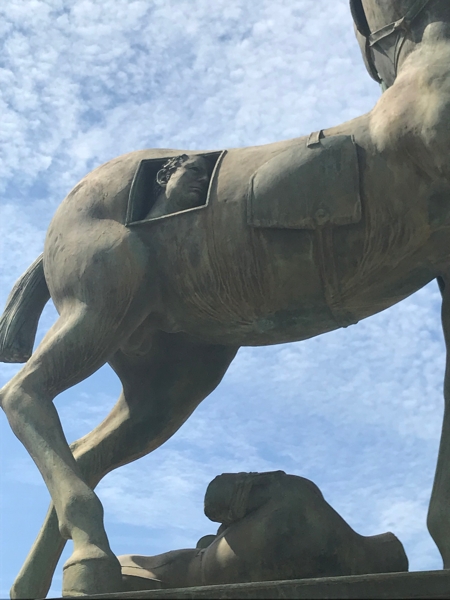 I asked about it — Maria apparently planned to ignore it — and was told that it was not in fact Roman but part of an exhibition from 2014 of works by Polish sculptor Igor Mitoraj, who died shortly before the exhibit opened; the powers that be decided to keep two of his sculptures in his honor. This is one; the other we saw on our trek up to the entrance — I’ll come back to it. 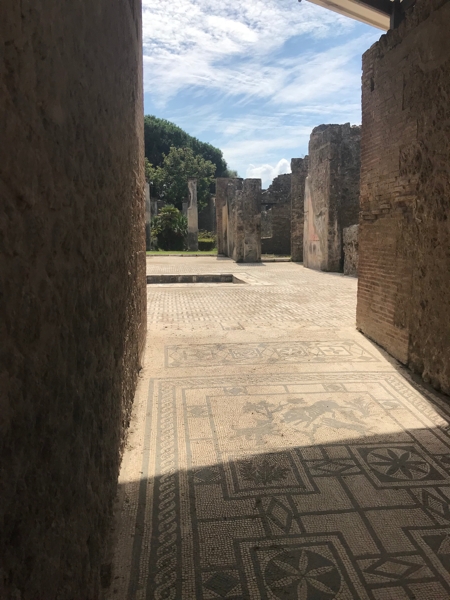 Roman colony though it was, Pompeii’s streets were more like open sewers, so stepping stones every 30 feet or so were necessary for pedestrian traffic: 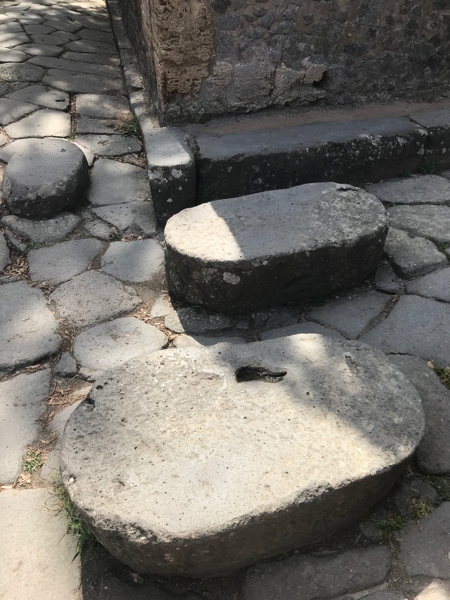 Maria did fill us in on something I had not known: like Rome, Pompeii was a “lasagna,” and archaeologists are unearthing the Greek colony that came before the Romans took over.  Here’s the Greek amphitheatre: 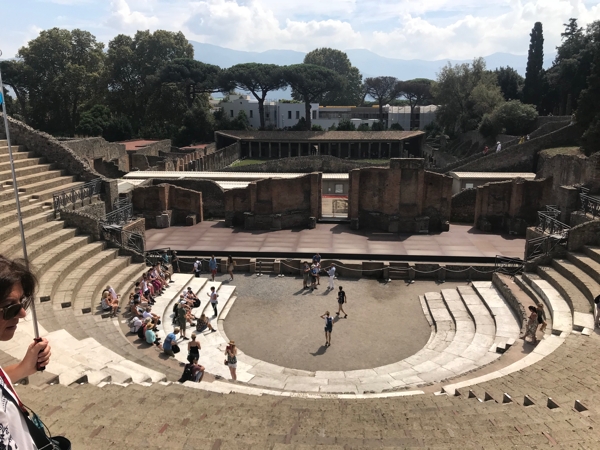 It’s been restored and is used for concerts and performances.  (The white marble seats are original; the rest are new construction.) Maria took care to explain that this facility was for “cultural” performances, not gladiator movies. 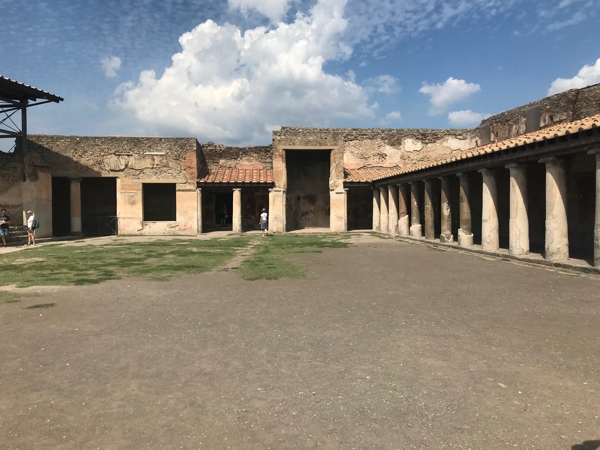 This was the gym portion, with a swimming pool to the left. Ladies were on the far side, men to the right. We went to the men’s facilities. 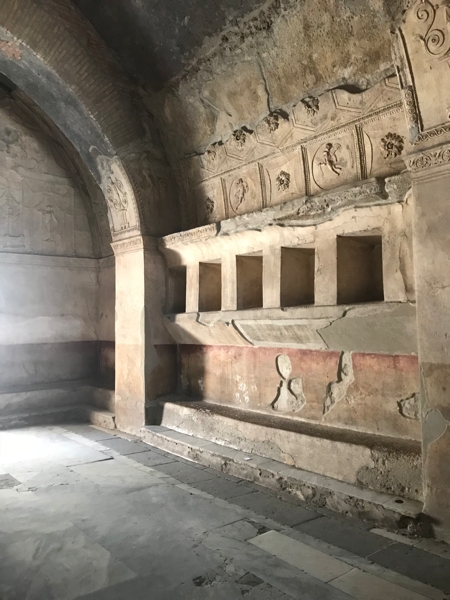 Three rooms, cold, tepid, and hot water, which was heated by hot air from ovens outside, pumped into the space beneath the elevated floor: 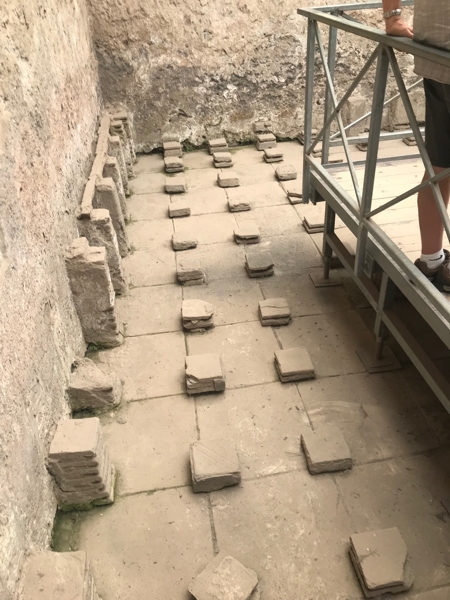 On the way out, Maria made sure we saw this on the street.  The more delicate among you should avert your eyes. The rest of you, well, I would say get your mind out of the gutter, but… 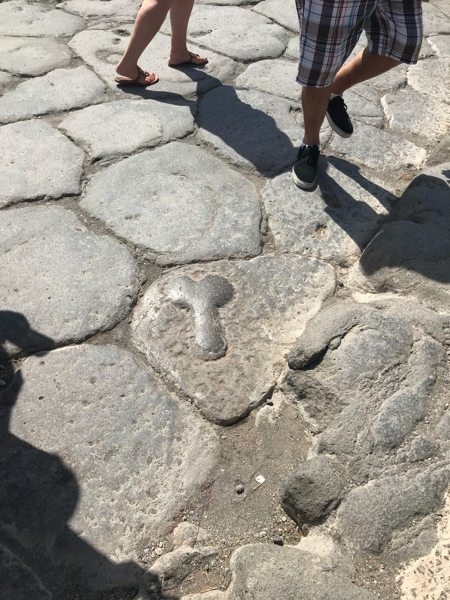 She didn’t really explain why this was here. It might have indicated a brothel, or it might just be a sign of protection: Priapus was highly honored in Pompeii. (You can buy winged phallus amulets and even winged phallus bottle openers out in the tourist zone.)

On our way out, more ruins, a temple I think: 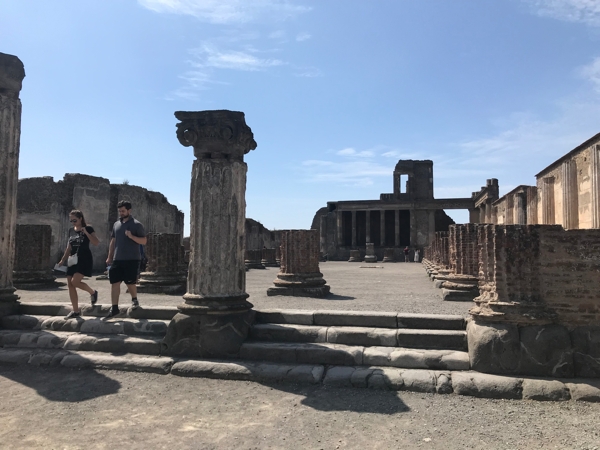 I think it would take at least a day to see the major points of interest in Pompeii, not to mention Herculaneum, the city on the other side of Vesuvius that was destroyed by lava. (Pompeii was covered in ash.) So those of you who came here looking for pornographic Roman frescoes — sorry.  Google is your friend.

So on the way out we got a rear view of another Mitoraj: 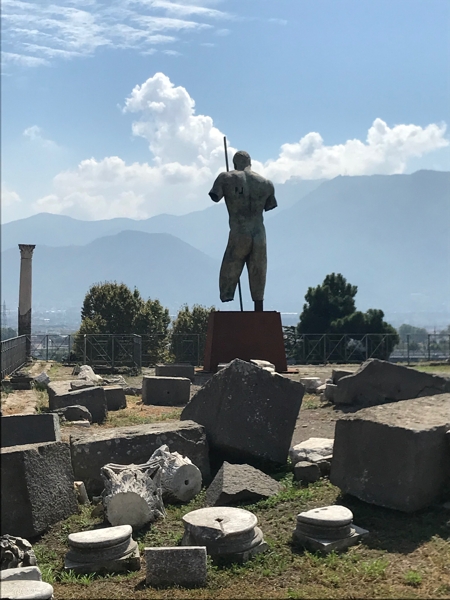 Maria told us it was called Achilles; she was mistaken — it is Daedalus. When we arrived, this was the view we got: 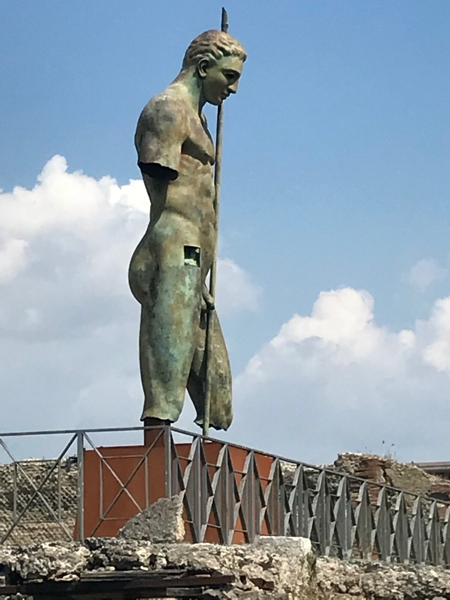 I remember thinking when we came in that it didn’t look like a Greek or Roman bronze, for several reasons, but mostly this one.

We trudged back to the bus and headed towards Sorrento. Mostly we traveled through rather slummy looking areas of metropolitan Naples, so Ignazio alerted us to get our cameras ready for the view when we came out of a tunnel: 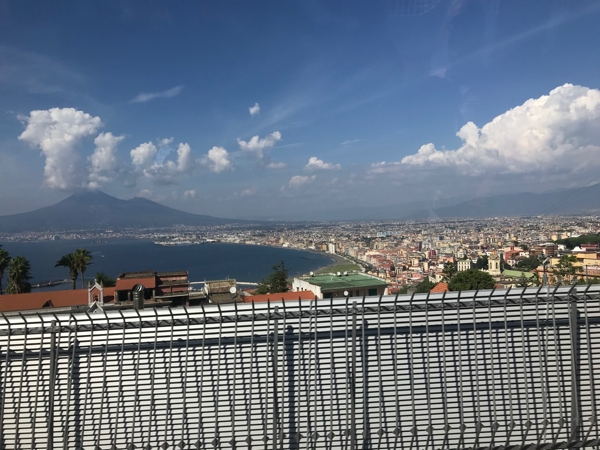 Almost anything can look picturesque if you’re far enough away.

The view from our hotel, the Towers Hotel: 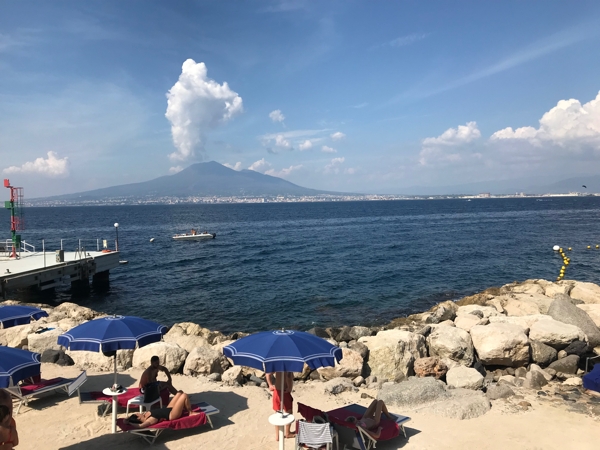 Yes, that’s Mt. Vesuvius across the bay. No, that’s not smoke — it’s a nearly omnipresent cloud.

After we checked in — and showered — we headed into Sorrento for yet another shopping opportunity, although this time it was at a really good marquetry establishment, family owned since 1852 and now in its sixth generation. Our purchase should be delivered today.

Dinner was at a small cafe. At least that’s what it looked like until you entered it and found yourself climbing into a Hello, Dolly fantasy world:

Terrace after terrace of tables and plants, ending in our private dining area: 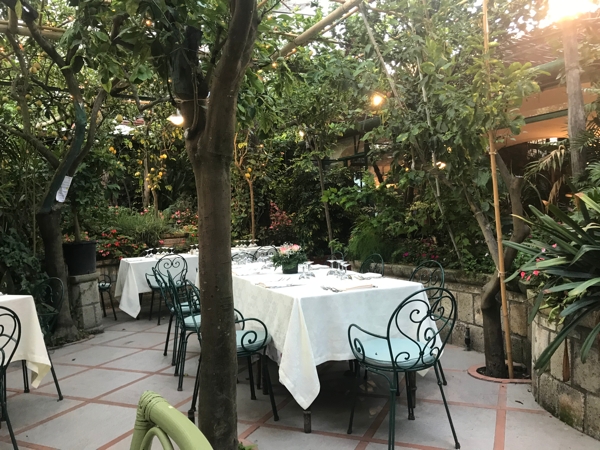 Ignazio was kind enough to take a photo of us: 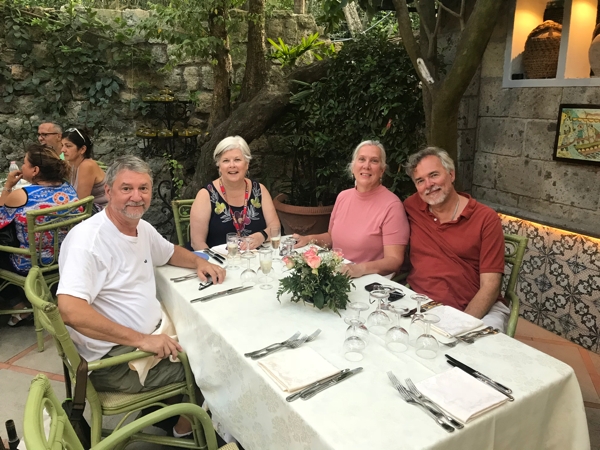 Great meal, and total exhaustion.  Back to the hotel and bed.

ONLY ONE MORE BLOG POST TO GO, and then the Pro Tips. Woot!