Tuesday. After a final breakfast at Casas de Sueños, we set out for Santa Fe.  Pro tip: take NM 14, aka The Turquoise Trail, instead of sticking to I-25.  The scenery is the usual fabulous. 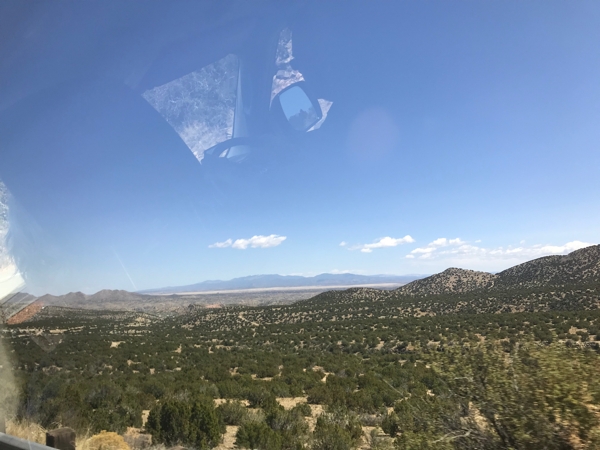 Plan on stopping in Madrid (pronounced MADrid) for lunch or just to shop around.  Madrid is a former coal town that was sold to hippies back in the day — much like Jerome, AZ — and I wish we had spent more time there.  We shopped in The Crystal Dragon, one of the original galleries there, and it is quite nice. Interesting jewelry and crystal stuff, all nicely hippie-woo.  Much turquoise, of course.

I bought a lovely small bowl made of carnelian, which I forgot to take a photo of.  (I’ll do a swag post after we get home.)

Santa Fe is only about an hour north of Albuquerque, so those of you who get your jollies watching me suffer through hours in the vehicle will have to learn to live with disappointment.

We headed straight for lunch at the Tune-Up Cafe, where the food is very tasty, although mostly Mexican which is not my thing.  Perhaps you mileage junkies can get off on my trying to find something on the menu that wouldn’t bother me.  I had a burger, which was good as well, but because of my increasing altitude sickness — and possible interaction with alcohol — I was unable to finish.

We checked in with our rental property people and headed back to SITE, a post-modern installation gallery, which we had passed on our way to the check-in: 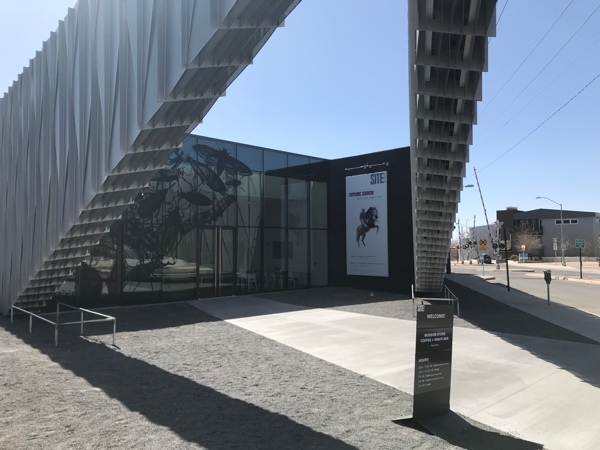 The main exhibits were not open on Tuesdays, OF COURSE, so we will return tomorrow.  However, the lobby had much that was fun and beautiful, and then this: 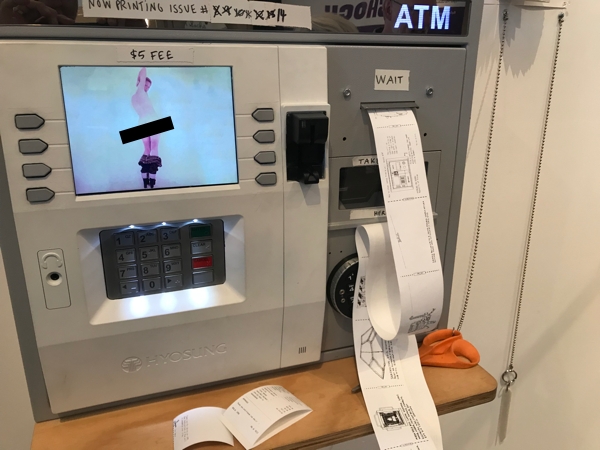 It’s an ATM in the sense that you can get money out of it, but mostly it’s art.  What you see it doing here is spitting out a receipt that turns into a booklet once you follow the instructions on the wall: 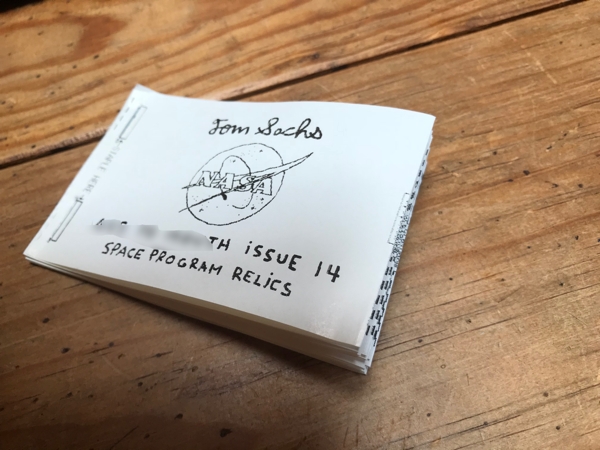 This is a cool idea that I will be definitely stealing for writers at Backstreet Art.  Full disclosure: I censored the photos for the sensitive among us. 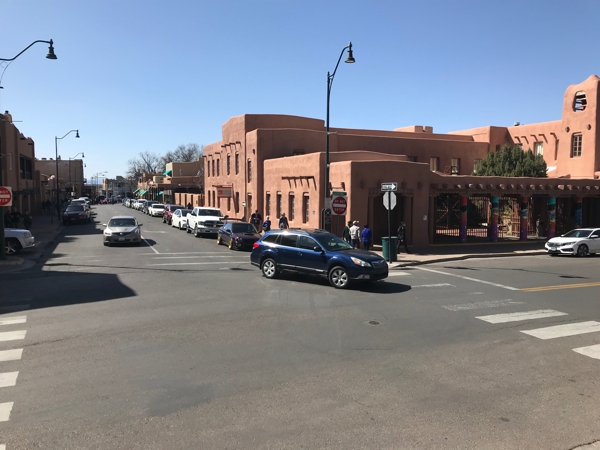 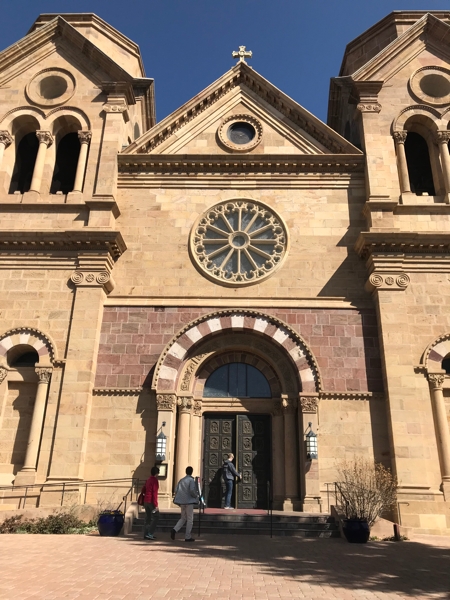 Second stop, the chapel of the Sisters of Loretto: 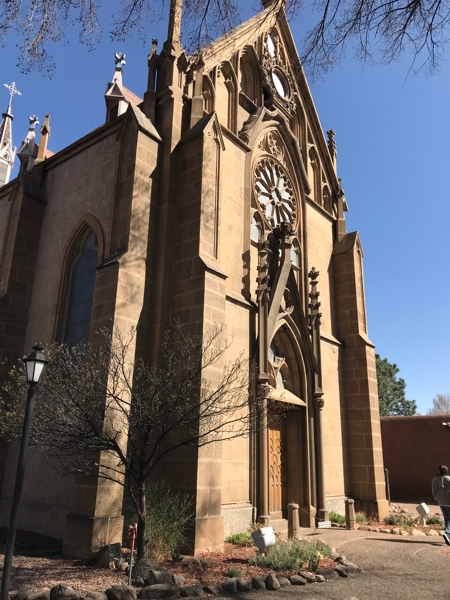 Outside this former chapel are some neato wind sculptures:

The Sisters of Laretto ran a school for girls from the late 1800s to 1968.  They built the chapel in 1873, and because of their limited land there was no room for a large staircase to the choir.  The story goes that one day an unnamed carpenter showed up and volunteered to build a circular staircase.  With “nothing but a hammer, a saw, and a carpenter’s square,” he built the staircase, then left without payment.  The nuns believed it was St. Joseph (patron saint of carpenters, of course) who had heard their prayers.

To this day, no one can explain how this thing stays up without a central support.  Really. 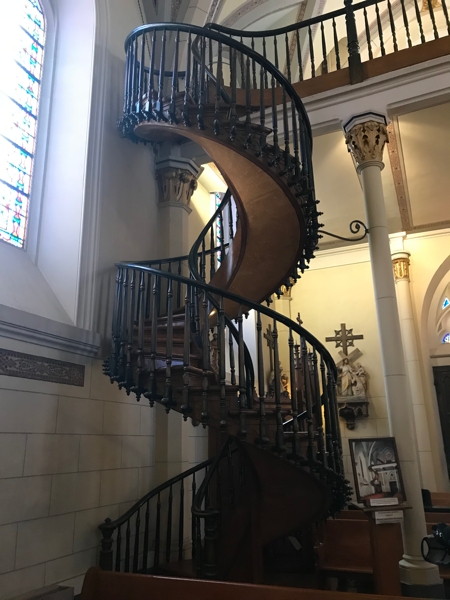 Even more, we learned from the narration that plays while you visit, the balustrade was added later when the nuns and girls found the ascent to be an unsettling experience.  So imagine this thing without the balustrade. 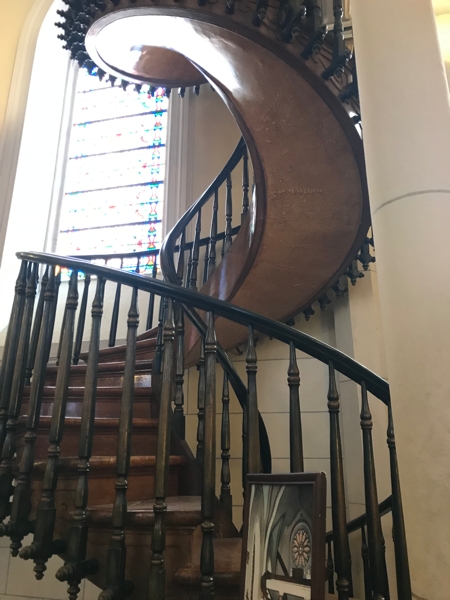 I found it very difficult to imagine.  The chapel is now run by a private company; admission goes to the Sisters of Loretto retirement fund.

In the gift shop, I found a cheesy angel that I will use in the labyrinth periodically.  It has potential.  Pics in the swag post next week.

Finally we checked in at our VRBO condo.  This is the view: 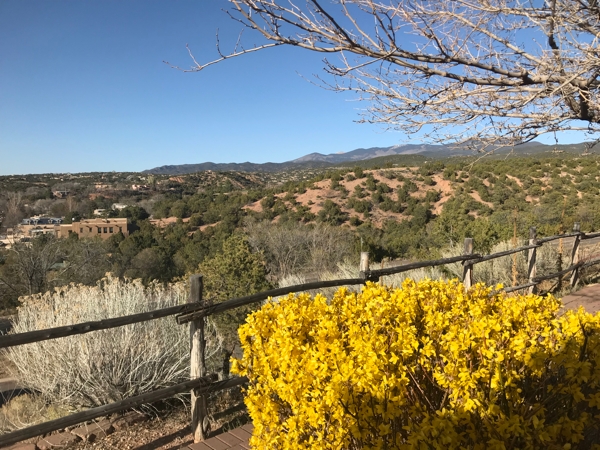 At this point, I was full on sick, and everyone else felt like crap as well.  Others went to Trader Joe’s for victuals, we ate a simple repast, and retired.