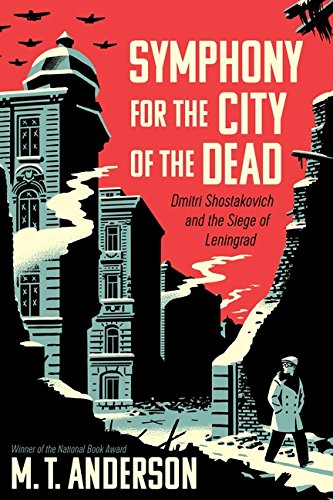 If you’re a longtime reader, as in last month, you know that I’m a huge fan of author M. T. Anderson. Whether he’s being serious (Feed) or silly (Pals in Peril series), his writing is solid.  In some kind of synesthesia, I feel as if he provides you with a smooth, hard surface that you can walk across with confidence: there are no soft spots or distracting undergrowth to impede your progress.

When I was writing the review last month for Landscape with Invisible Hand, I popped over to Amazon to snag the URL for the book, and that’s when I noticed he had written another book I had missed: Symphony for the City of the Dead: Dmitri Shostakovich and the Siege of Leningrad.

I am a huge Shostakovich fan and here was a book about him by one of my favorite authors.  It implied that Anderson is also a fan, which made my heart go pitter-pat.  (Are you, Mr. A.?  If so, text me, bro.) I ordered it immediately.

This book is amazing. I knew the basis of the story: when the Nazi army laid siege to Leningrad in 1941, Shostakovich stayed in his hometown to be part of the war effort and decided to write a symphony that glorified the bravery of the Soviet citizenry. Word got out, and the entire world (at war) waited to hear the results.  When it was finished, the score was microfilmed and rushed to the West in a pretty bizarre sequence of events, where it was performed to general acclaim as part of the war effort.

I didn’t know the half of it.  Anderson has given us a thoroughly researched book that is simultaneously a biography of Shostakovich, a history of the Soviet Union, a political examination of Stalin and Hitler, a telling of the horrific story of the siege, and a musicological look at the Symphony No. 7 while it is being composed.  Like a skilled cinematographer, Anderson leads us from scene to scene, directing our focus in a way that gives us the context to understand both the larger frame of the war and the intimate setting of Shostakovich’s personal life.

Even as I was reading it, my meta-reader’s mind became fascinated with what it must have taken for Anderson to write this book — the staggering amount of research; the pulling-together of all the facts, quotes, context; the balancing of definite facts and the “what-ifs,” of which there are more than a few in the Stalin era.  And what possessed him to write the book in the first place?  These are the things that I will ask him once he texts me and we become BFF.

In the meantime, I have these resources: