M. T. Anderson is one of my favorite authors, young adult or otherwise.  His serious works, like Feed or The Astonishing Life of Octavian Nothing, Traitor to the Nation, will radically alter the way you perceive what you thought was established reality. His comic works, like Whales on Stilts and Jasper Dash and the Flame-Pits of Delaware, are gaspingly funny. 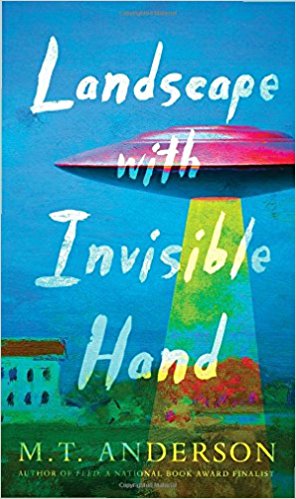 Since I’ve been retired from checking out books to kindergarteners for six years now, I’m often behind on when YA authors have written something new.  So it was with Anderson’s Landscape with Invisible Hand, which I ordered as soon as I stumbled across it.

It’s a slim volume, only 149 pages, but it is an incredibly tough read.  Not because it’s densely written, but because of the world depicted in the book.

Quick summary: it’s earth, in the future near enough that we can recognize our society, and the aliens who have been buzzing us since the last century have finally revealed themselves to us, bearing amazing technology which they are perfectly willing to share with us.  Our narrator, teen Adam, is an artist.

Here’s my complaint—and it’s not with the book, which is brilliant.  My complaint is with the marketing department: the inside of the dust jacket gives us a plot summary without giving away the nexus of the story, and then it says this:

“M. T. Anderson, winner of the National Book Award and author of Feed, returns to future Earth in this sharply wrought satire of art and truth in the midst of colonization.”

That’s not what this book is about.

I mean to say, it’s right there in the title, marketing department!

The aliens—called the vuvv—are perfectly willing to share their amazing technology with us,  for a price. They can cure any disease if you can pay them. They can raise food and manufacture goods cheaper and better than any Earth company, which promptly puts Earth companies out of business, with a staggering loss of jobs and income for most of the citizenry.

The rich, of course, are unaffected: they are able to invest in vuvv technologies.  They live in floating homes/apartment complexes that block out the sun below. Their lives go on much as they do now.

The vuvv are not cruel.  They are simply intergalactic capitalists unconcerned about anything but trade.

And that’s what the book is about: unrestrained capitalism, colonization/imperialism, and the impact it has on the powerless.  Anderson’s socioeconomic logic is relentless and inescapable, and Landscape is one of the more frighteningly disconcerting books I’ve ever read.

But I think there’s more here than meets the eye. Here’s my question to M. T. Anderson: there’s more to come, isn’t there?  We’re actually following Adam’s radicalization, aren’t we? That bucolic ending in Asheville was false hope, wasn’t it?  Jebus.

One thought on “Marketing, feh.”