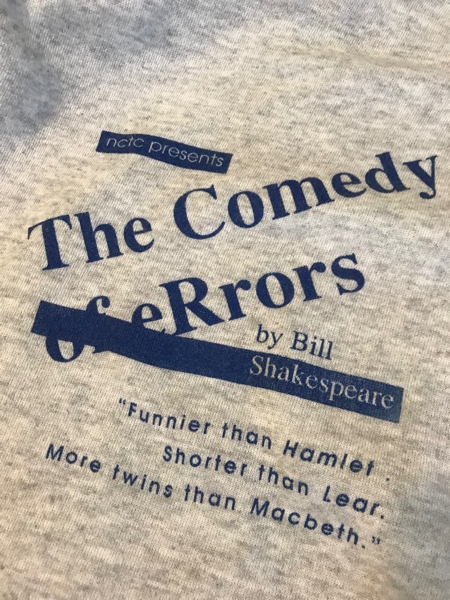 We’re rearranging about half the house and in doing so are coming to those decisions one comes to when one has a metric tonne of stuff.

You know what I’m talking about: those tubs of t-shirts and sweatshirts that commemorate things like shows you were in or GHP summers or (now) burns.  I understand completely that I have not worn any of them in probably a decade and I am not likely to wear them ever again.  Even I understand that they need to go, even if it means — to me — cutting the ties to that event.[1]

But that’s a discussion for another day.  Today let’s look at this sweatshirt, which we made to advertise the Newnan Community Theatre Company’s production of Comedy of Errors, back in 1993.

First of all, I am still delighted when I see my tagline: deadpan hyperbole of obvious truths that say nothing about the quality of the show itself. (One of the younger cast members asked, quite sincerely, “How many twins does Macbeth have?”)

We had done Tartuffe back in the spring of that year.  Jeff Bishop directed, and he wanted to do it in straight-up period style, so we built a raked stage with wings and all those costumes.  I love costumes, I love period costumes, but these got to me for some reason, and one day as we were all furiously cutting and sewing, the subject of Comedy of Errors came up: would we do Elizabethan costumes for it?

Aghast, I joked that no, we would put everyone in sweatpants and be done with it.

And then I thought: why not?

In a play about identity, what could be more appropriate than a mise en scene where all the characters are identical? So I decided that everyone would wear grey sweatpants and sweatshirts, and that each character would have a different color of facepaint.  The twins, of course, would have the same color as each other.  (We came to refer to the show as “the Smurfs do Shakespeare.”)

This concept had the advantage of being astoundingly cheap, of course, but it came with a cost.  As I explained to the cast as we began work, the facepaint would obliterate any but the wildest facial expressions.  They were not going to be able to rely on subtle glances or grimaces.  This was going to have to be the broadest slapstick ever, with Shakespeare.

This was the first time that I auditioned a show and didn’t cast it right away.  The actors and I spent a couple of weeks working with the text, playing with it, and developing a physical language, a shorthand that we could call on when we began putting the show together.  Finally, the actors began to panic and demanded that I assign roles, mostly so they could start learning lines. Fair enough.

Somehow it all worked.  The actors all became extremely free in their physical work, and that spilled over into their ability to interpret the text as well.  One night I had to leave rehearsal for a short meeting, and I told them to play around with the scene in II.2 in which poor abused Adriana, wife of Antipholus of Ephesus, confronts the wrong man in the marketplace with her complaints.  When I got back I was presented with the astounding spectacle of Judy (Adriana) doing the entire long speech pursuing Mary (Ant. of Syracuse) as if they were in a professional wrestling match, ending with both on the floor.  Mary dragged herself free, panting, stood, and barely gasped out, “Plead you to me, fair dame? I… know… you… not.”  Brought the house down.

More: Blue (Pinch) being flipped on his back by Jeff (Ant. of Eph) in a cloud of white hair powder.

More: the performance when Jeff, refused entry into his own home, hurled himself at the door three times during his long speech (with the elders of Ephesus nodding complacently behind him)—only this performance, on the third run he suddenly grabbed Brady (Dromio of Eph.) and hurled him at the door.  Brilliant.

So yes: the sweatshirt is a physical reminder that we did good work.  But it has to go.  If nothing else, I’ll need to make room for my Peter & the Starcatcher sweatshirt, won’t I?

3 thoughts on “A memory”