One reason we loved Prague so much was that we were there for two and a half days and were able to get out and explore it, which is not really possible on the cruise. And while we had assiduously avoided all the WWII tours, our guide in Passau had encouraged us to take the Jewish Prague walking tour, and so this morning we headed out to the Jewish Museum complex.

Our first stop was the Old-New Synagogue, the oldest in Europe. 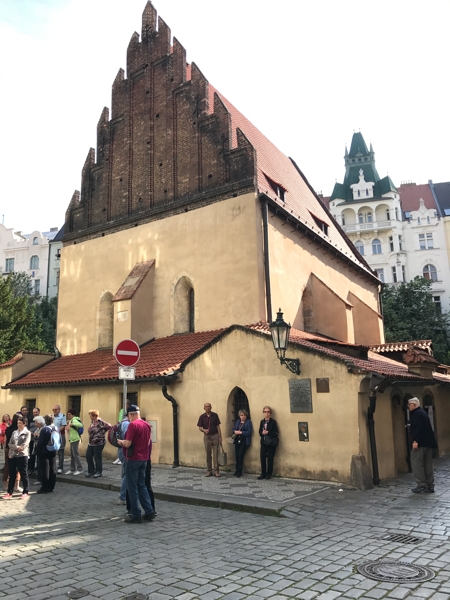 Pure Gothic.  It shows my ignorance when I’m always startled at the architecture of European synagogues: I’m not sure why I have it in my head that the Jews would have their own ecclesiastical style divorced from their time and place.

The portal into the sanctuary: The tree is the symbol of the twelve tribes of Israel bearing fruit. Seating is still as it was when the synagogue was built: around the periphery.  There are windows in the thick walls for the women’s gallery to be able to see in. 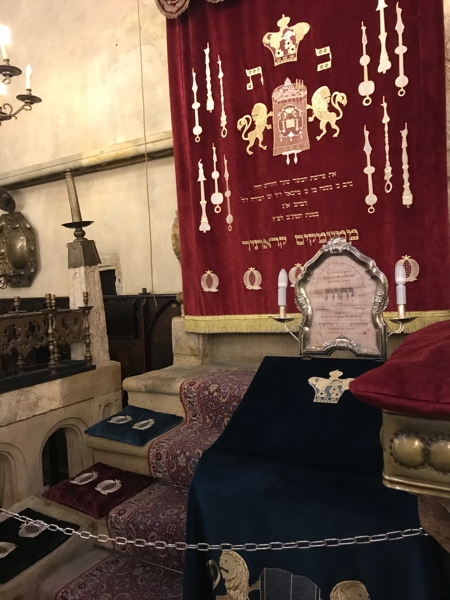 The Ark containing the Torah is behind this tapestry, hand embroidered of course.  The crown indicates that this is a Sephardic congregation; the Ashkenazi Jews used bells as their symbols.

Our next stop was the Pinkas Synagogue.  It was gut-wrenching. The walls have been covered with the names and villages of the 80,000 Czech Jews who were deported and killed by the Nazis.  And then upstairs is the exhibit of children’s art from Terezin.

Terezin was the Nazis’ “model” concentration camp, a kind of Potemkin village that they used to show the rest of the world how well they were treating the Jews.  There, Friedl Dicker-Brandeis, an artist from the Bauhaus school, taught art lessons to the children.  Before she was deported to Auschwitz, she hid 4,500 pieces of art in two suitcases, which were found ten years later.  The Jewish Museum stores them now; the exhibit in the Pinkas Synagogue are reproductions. 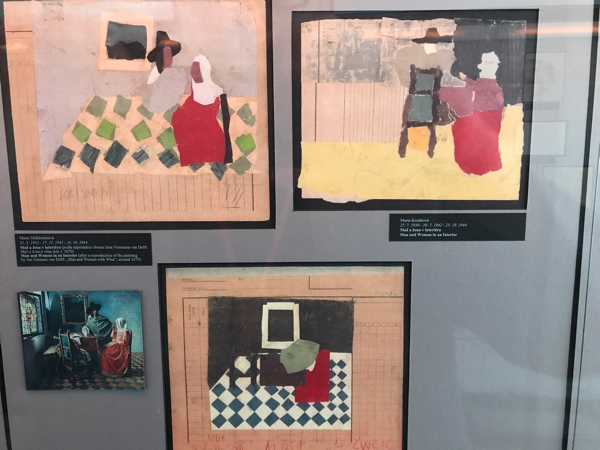 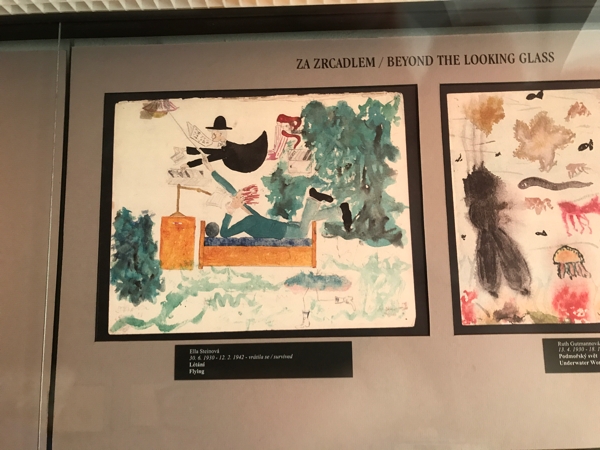 All you could do is cry.

The sanctuary itself is a kind of pseudo-Romanesque.  I found the Art Nouveau windows to be particularly lovely: The Spanish Synagogue is spectacular.  It was built in the 1860s by the Reformed community in the Moorish Revival Style, which you may be familiar with from the rather newer Fox Theatre in Atlanta. 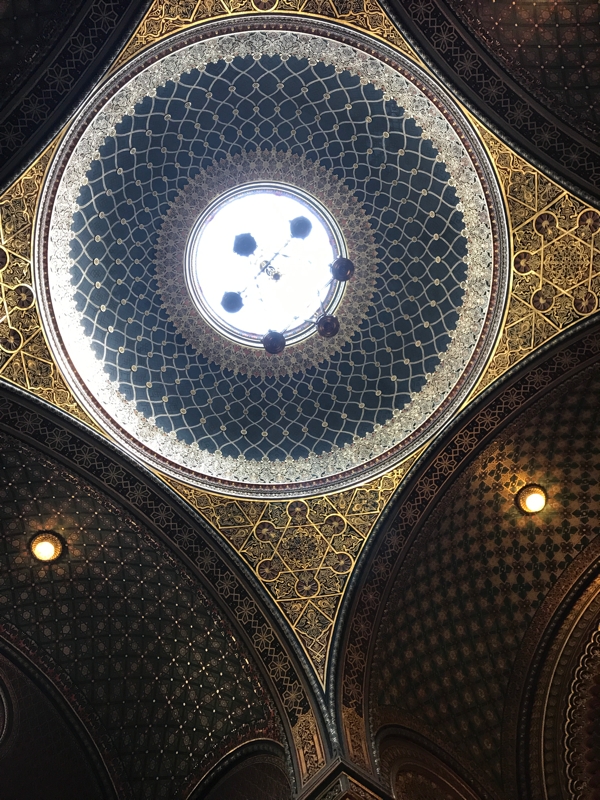 There were a couple more stops on the tour: the Jewish Cemetery, the Klausen Synagogue with its exhibit of religious paraments and service vessels, and the Ceremonial Hall of the Jewish Burial Society, which has made no concessions to modern crown control in its narrow stairs.  The restroom in particular was difficult to negotiate via its single narrow spiral staircase down.

Then we were free for the rest of the day.  We wandered back to the Old Town Square to see what we could see. We do not know whether this is high-falutin’ cuisine or comestibles for Kafka snobs.

All the streets in Prague look basically like this: There is a place on the Old Town Square which has exhibits of Dali, Warhol (née Warhola, i.e., of Czech extraction), and Alphonse Mucha.  It was the latter we wanted to see.  (You paid separately for each exhibit.)

Who is Alphonse Mucha?  You know him: 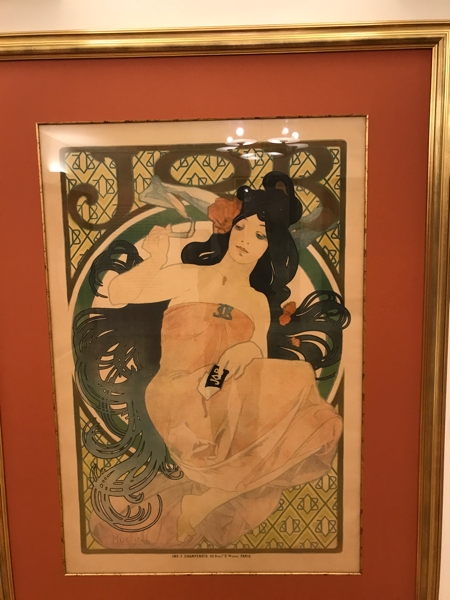 Also Sarah Bernhardt posters, etc. etc.  The man was prolific and unstoppable, the Czech equivalent of Louis Tiffany.  He designed anything and everything: posters, cookie tins, furniture, calendars, notecards, stained glass—everything.  He was the soul of European Art Nouveau.

The irony?  He was rejected as a student by the Prague Institute and advised to “find another career.”  Oops.

I found this amusing: Vin des Incas, available, the poster says, in all pharmacies, for convalescents.  And why is this wine “Incan”?  Because its not-so-secret ingredient (in the little white circle to the left of the name) is “la coca du Pèrou.”  Cocaine.  Ah, the Fin de Siècle…

We were thinking we would head back to the Kokorovka Cafe for lunch, but take a different route.  That’s when we saw this poster: Talk about Top 40.  But the selling point was the Widor “Toccata” from his Organ Symphony No. 5.  Here, go listen to this in the background.  Turn up your speakers.

The Widor Toccata was played at my lovely first wife’s college graduation, and she made her poor church organist learn it to play as our wedding recessional.  It is a glorious piece.

The poster was one of dozens outside a little shop that sold tickets to these events all over the city.  Prague is and always has been a very musical city; Mozart premiered Don Giovanni there because Prague was a lot more enthusiastic about his music than stuffy old Vienna.  We went inside and bought tickets.

Then we had to change our lunch plans, because we had made reservations at the Café Imperial for dinner.  We went there to cancel our dinner plans and to have lunch instead.

Can you say Belle Epoque? Walls and ceilings covered in tile.  Food was delicious. 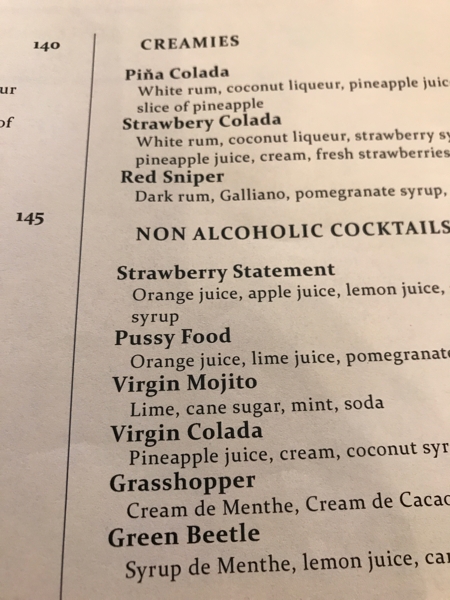 Here, have a dessert photo: We retreated to the hotel for a nap (DO NOT OMIT THE NAPPING!) and then ventured out to our concert.  We arrived super early and strolled the street: art galleries, beer garden with live jazz, shops and restaurants.

And there it was: Alas, there wasn’t enough time for me to visit and genuflect.  We will return.

Finally it was time to head back to St. Giles Church for the concert. Simple Romanesque exterior.  But you know how that ends: The house opened at 7:30, but there was a service going on; the Dominican monks whose monastery is attached were singing mass.  We were allowed to go in and have a seat, but no photos of course.  (A sign asked for reverence with the irreverent advisory, “The monks are not monkeys.”)  Their singing was perfect, reverberating throughout the nave with no amplification: if that had been the concert it would have been enough.

While we were waiting, I found this: 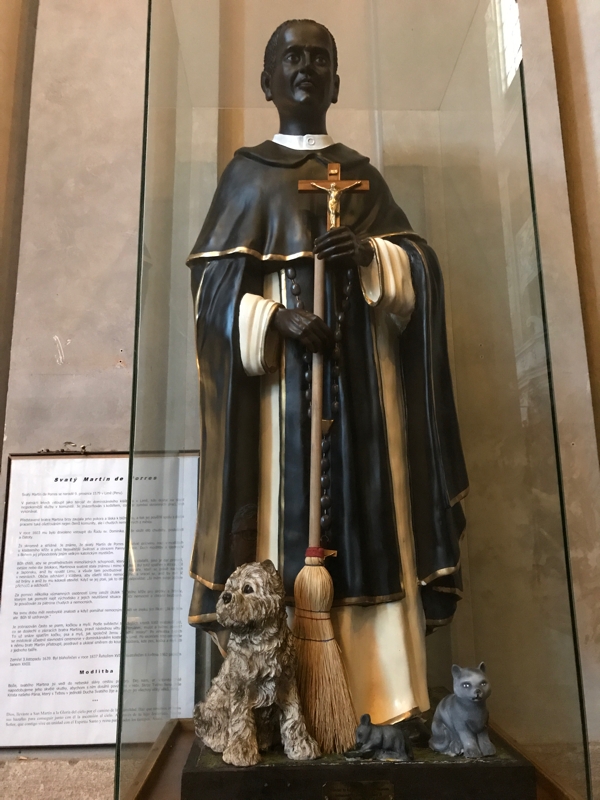 St. Martin of Tours—my name saint, which I didn’t realize at the time because a) the donor of the statue was Spanish and I didn’t make the leap from Torres to Tours; and b)… … what?  St. Martin’s myth is his cutting his cloak in two to share with a beggar.  I’ve never heard of —and cannot now find —any connection with household animals.  The placard on the wall is completely in Czech other than the title, so I guess I’ll never know.

The monks finished the mass and withdrew.  An elderly Dominican welcomed us to the church and to the concert in a lovely speech about caritas, music, and God.

The concert itself was satisfying: a string quartet alternating with the organist.  Yes, the music was Top 40, but it was flawlessly performed with great musicality so you’ll get no quibbles from me.  If I had wanted 12-tone nonsense I would have stayed in Vienna. The concert gave ample opportunity for examining the church, and I found myself considering it in terms of entertainment, i.e., for a populace who were largely still illiterate, before our own time of constant stimulation, the exuberance of the altarpiece for example must have been rather exhilarating.

The music of the monks, the organ, the incense, the shining of the gold decor, the drama of the angels — just look at these weightless beings in full flight! —the physical presence of saints and bishops in statuary: what a powerful experience to a person who has never seen a Michael Bay movie.

And the Widor was everything we hoped for.