You might be forgiven for thinking that international travel on your birthday was a glamorous thing. Let me correct that impression.

First of all, if you’re headed east, to Europe, you lose hours. You leave Atlanta at 10:30 pm the night before your birthday, and by the time you land in Amsterdam it’s already past noon, what with travel and time zones. How is this even fair?

Of course, it just puts you closer to cocktail hour, I suppose. As I write this, it is 3:40 pm Budapest time; we are somewhere over Germany. I think. It’s hard to tell: 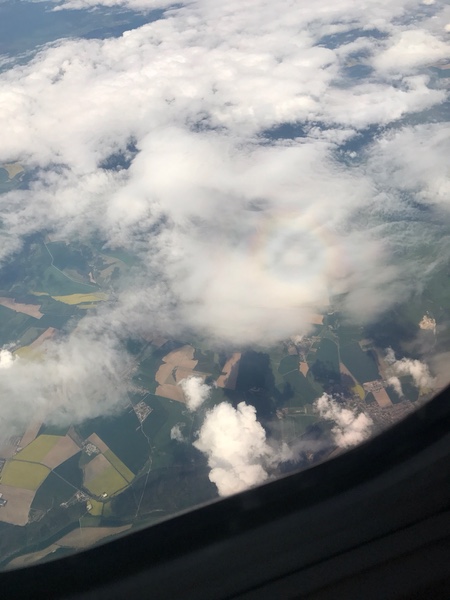 That is not a lens flare or reflection: it is a circular rainbow on the cloud.  Later, the shadow of the plane was in the center.  It was cool, and there were some phenomenal cloud formations we flew through which would have caused any CGI director to have an orgasm.

So thus far on my birthday I have seen the inside of two KLM planes, and the corridors of the Schiphol. This is not even close to glamorous.

Do not get me wrong: soon enough this will be delightful, what with mud baths in Budapest and concerts in Vienna, but I hate hate hate hate hate flying. It’s tedious, uncomfortable, and my ears feel like someone has jammed pencils into them. And if I had not snagged analgesic patches for my right buttock from my pain management doctor, this would be the crankiest first world birthday rant ever.

As was foretold in the prophecies, the trip itself is rather phenomenal.   All those Downton Abbey commercials?  Glossy advertising merely.  (I am writing this on Saturday morning.)  The reality is far better.

The ship is spotless and elegant, the staff is warm (imagine a boat full of Chekhovs from Star Trek), and the food is amazing.  The program director, Sorin, is sincerely funny (“After dinner tomorrow night, you may visit the wheelhouse, where the captain will show you the buttons you are not allowed to push,” in that Slavic accent).

The room, of course, is tiny: At dinner, I was surprised by my lovely first wife: You can’t see it, because I ate it before thinking to get a photo, but just behind the blackberries is a little medallion made of sugar with the Viking logo on it.

After dinner, we strolled up to the sun deck (where you have to be wary as we approach bridges: the Danube is up, which means you may find yourself like an overconfident movie villain in a train-top fight scene if you’re not careful) and got a night time river tour of Budapest, narrated by the ever-entertaining Sorin:

There was a lot more, of course, but how many stunning night-time photos of imperial architecture do you really want to see?  By the time our ship — the Viking Tor — had turned around and come back up river to dock for the night, we were exhausted and went to our room to unpack and collapse.