I was reminded while tidying up yesterday that I have a whole stack of manila folders that I would like to throw away but which I have left lying about because I’d like to turn them into blogposts first.  So let’s talk about this folder labeled COMPUTER/SOFTWARE RECEIPTS.

First of all, this is one of those folders you have in your filing cabinet that you haven’t used in, oh, I don’t know, twenty-five years[1] and frankly don’t remember.  It was weird looking into what essentially is a time capsule from the late 20th century.

A catalog of invoices and receipts:

Wow.  There may be a whole series of blogposts here.

I don’t think this collection of paper even represents all the technology I bought in that period.  For example, I’m pretty sure I bought the Ensoniq keyboard during that timeframe, but all that’s in the folder is a very nice glossy product sheet.  Still, there’s a lot of archaeology here. 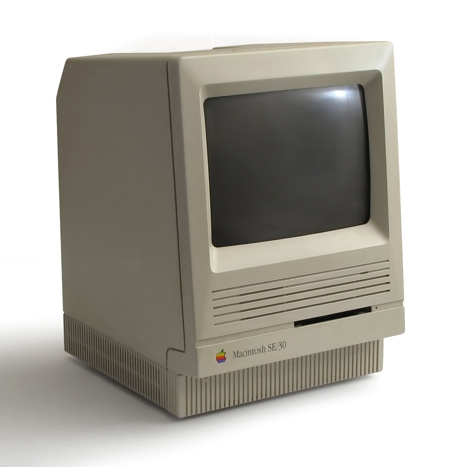 All of it was for my trusty old SE/30, probably my favorite computer of all time.  Just looking for the photo was enough to trigger waves of nostalgia.  And this was in despite of the problem with the hard drive, which ended up necessitating my whacking it on the side whenever I needed to start it up after a rare shutdown.  (Full disclosure: I still have it, in its carrying case.  Why in a carrying case?  Because I lugged it back and forth to school to use as my work computer.)

But it had a hard drive, you guys!  The first Macs didn’t; you had to insert a system disk just to boot up and load the OS into the memory, which may have been a staggering 256K.  The SE/30 I think came with 1Mb of memory; I upgraded it to 2Mb myself.  Woot![2]

So once you got the system up and running, then you inserted disks for any program you needed to run.  PageMaker 1.0 required two of them.  “Please insert Disc 2” was a constant refrain. And of course you saved everything to diskette.

The SE/30 had a hard drive, which meant no more disk swapping!

But even that was not enough, hence the last item in the list above, an external hard drive—if there’s anything that illustrates the gobsmacking changes in our lives in a mere quarter century, it’s storage.  That external drive had 105Mb of storage, and it cost $499.00.  I just plugged in a thumb drive to see how much storage it had: 8Gb, and it’s a throwaway.  At 1991 prices, that throwaway would cost $38,000.[3]

That’s all my brain can handle for today.  We’ll keep exploring.