This new drink came about, as so often is the case, by making one antique cocktail and then wondering what else one might be able to use one of the rather specific ingredients for.

In this case, I started with The Widow’s Kiss (from Vintage Spirits & Forgotten Cocktails): 1.5 oz Calvados, .75 oz yellow Chartreuse, .75 oz Benedictine, Angostura bitters.  Quite, quite tasty.

That meant I had the bottle of Calvados out on the counter, and then my eye fell on the newish bottle of Velvet Falernum, a sugarcane-based cinnamony kind of liqueur.  Apple and cinnamon, right?  So 1.5 oz of Calvados and .75 oz of Falernum, and it was very good.

However, you usually want three ingredients, and I thought that the drink, tasty as it was, needed a little depth.  But what?

I went to check out the cabinet and I found Swedish Punsch, one of my favorites.  As it happens, it’s also sugarcane-based, but with a deeper, nuttier flavor.  And lo! 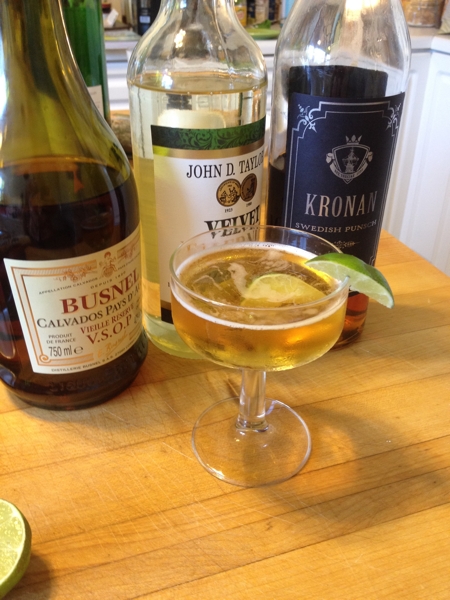 Why is it called “Turff’s Curve”?  Kevin McInturff has a FaceTubes group called Turffin, and mostly it’s people posting photos of the beer they’re drinking.  I’m an outlier with my penchant for craft cocktails, and when I posted the aforementioned Widow’s Kiss, Turff jokingly complained that I never posted drinks that didn’t require a trip to the liquor store for some new substance.  I felt that this recipe was the apotheosis of throwing him a curve, since it was probable that he didn’t own any of the ingredients.

He of course claims it’s because I described the drink as “Sweetish, with bitter and nutty undertones.”  That, too.