As part of the ritual that the 3 Old Men perform in their labyrinth (at regional Burns here and there), we apply liquid kaolin as body paint before walking the labyrinth and assuming our posts as officiants.  We have the kaolin in a bowl on a plant stand at the north entrance; the officiants are at the other entrances to the labyrinth.

We used a stainless steel bowl that I had picked up at a discount store—my impulse was to use a nice piece of pottery, but I was afraid that it might get knocked over and break.  The plant stand is placed on uneven ground, after all.

At any rate, the stainless steel bowl vanished sometime after Alchemy last fall and I haven’t seen it since.  Not a problem: it was cheap, and there were plenty more where that came from.

But last week in Fernandina Beach we were in Hunt’s Art & Artifact Gallery, one of our favorite stores there—my quartz singing bowl came from there—and I found this: 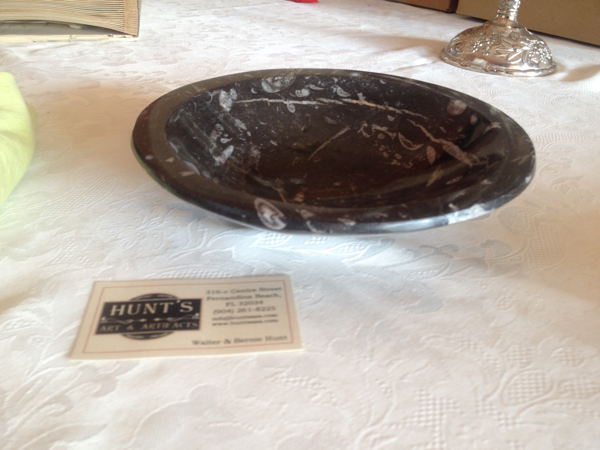 I was immediately taken with it.  It’s not too large, easily fits into one’s outstretched hands (we hold the bowl for each other), and will be easily cleaned from all that white clay.  I think, too, that if it were to fall to the ground it would easily survive the fall.

It’s made of stone from the Atlas Mountains in Morocco, and the white bits are actually fossilized Orthoceras, little squids from 450 million years ago.  Pretty cool, actually.  (Even cooler, part of the Atlas Mountains were formed when North America and Africa collided at one point—and the remains of that can be found in the Appalachians and the Fall Line!)

And since we’re dealing with hippies, I will quote what I found in my search for nice photos, found on a site with healing crystals and such:

Fossils are believed to increase life span, reduce toxins, anxiety, stress, balance the emotions, make one more confident. Containing supernatural and physical healing powers. They promote a sense of pride and success in business. Healers use fossils to enhance telepathy and stimulate the mind. Traditionally, fossils have been used to aid in  reducing tiredness, fatigue, digestive disorders, and rheumatism.

Sure.  I think that about covers it.

Anyway, we have a new bowl, and I’m thinking we need a new stand for it.  Stand by for details later.