You may recall that at the westpoint of the labyrinth I have a bowl to contain water, the classical element of the West.  You may also recall that the glass bowl I had there for a while succumbed to the cold last January when I left it uncovered and the Great Storm split it in twain: 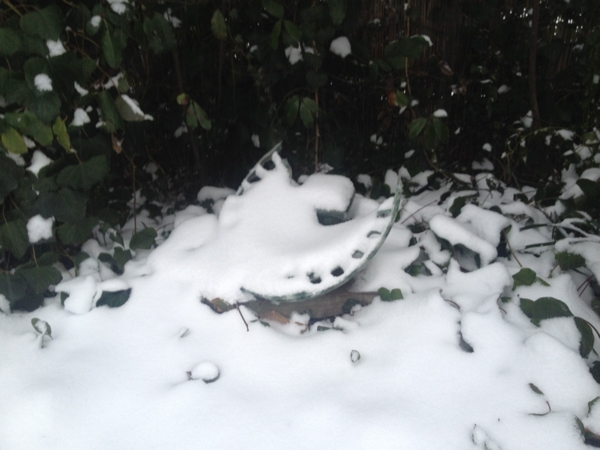 So when I bought Brooks Barrow‘s limestone bowl last March at the American Crafts Council show, the first thing I asked him was how it would withstand the occasional ice storm.  He assured me that Wisconsin limestone is the hardest there is and it should be fine.

And so it has proven: 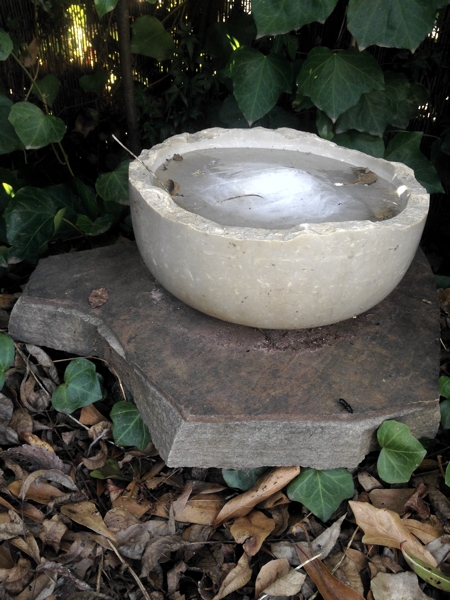 Normally I keep the bowl covered so that water doesn’t collect in it.  During the summer, of course, it would be a breeding ground for mosquitoes, but also the decaying plant matter that inevitably collects in bowls/birdbaths/fountains will leave stains. 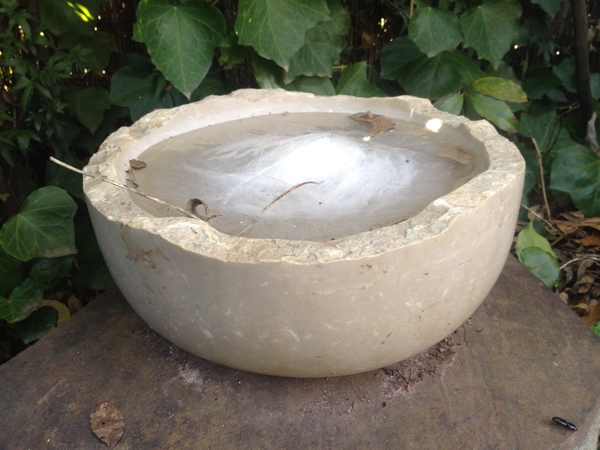 It’s hard to see, but the center white ice is actually bulged up.  The water froze from the cold, cold limestone inward, pushing the last of the water up and stressing it white.

The poor little beetle in the lower right is dead, not resting.  Circle of life, etc.

The only other element in the labyrinth that was affected by this week’s freezing temperatures is this one: 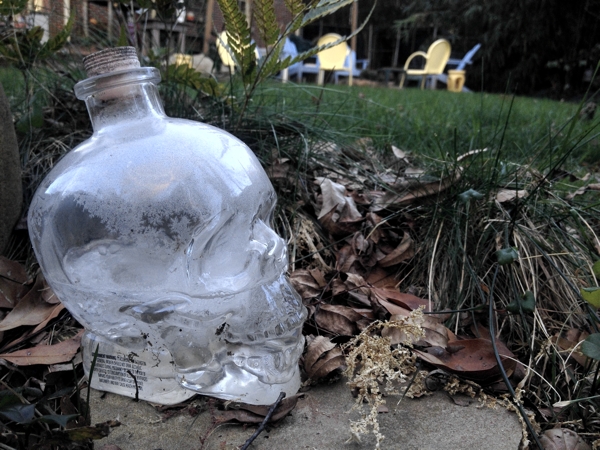 This is a bottle of Crystal Head vodka, or at least it used to be. Crystal Head is Dan Aykroyd’s product, and the packaging/marketing is a hoot.  Beside the skull-shaped bottle, the box it comes in proudly proclaims that it is filtered through “crystals” on his upstate farm/distillery/whatever.

Despite all this, it’s actually a really good vodka, and it amused me to have a skull sitting out in the labyrinth, especially one that you could stop and take a swig from as you passed by.  (It’s at the northwest corner, on the bank overlooking the Dancing Faun.) I’ve also used it for pouring libations to the Universe over at the fire pit, and the Lichtenbergians passed it around during a memorial ritual for a member.

I used to store it and then put it back out for each session, but then I got lazy.  It’s not as if it were going to freeze, after all.  Then one day the large square top to the cork came off, as I supposed all glued-on items will eventually do if exposed to the elements long enough, and all was well till one night I was walking the labyrinth and decided to take a swig and OH MY GOD IT WAS MOSTLY RAINWATER INSTEAD OF VODKA.

All I could think was amoebic dysentery and immediately rinsed my mouth out with gin, as one does.  Blergh!

I left it out there as a purely decorative object, and now the water has frozen.  I like the frost on the interior of the top.

Someday soon I will need to buy another bottle so that we can continue to  ritualize to our hearts’ content.