Every morning I get up and walk two miles. This is because my doctor has gotten cranky in his old age. Part of the path I take is around the city park down on First Avenue, across the gully/railroad tracks from the theatre, going three times around the path.

It’s a lovely, open greensward, and lately part of its appeal is its unimpeded view of the sky. I realized this the morning after the recent Perseids meteor shower when I caught the last of the meteors flashing across the sky. I made a mental note for next time.

This past week I’ve been watching the conjunction of Venus and Jupiter on the eastern horizon, and since I’ve been reading Flat Earth, by Christine Garwood, it has been an amazing experience.

We have a couple of disparate threads here—I’ll try to keep it clear as we go along.

First of all, Flat Earth is solidly researched and infuriating: no one after the Babylonians believed the earth was flat—you have been lied to every Columbus Day—but in the 1840s, after Darwin had published and scientists began establishing themselves both as a profession and as an arbiter of truth, there arose a countermovement which looks, unfortunately, very familiar to us here in the 21st century: the Zetetic Astronomy movement.

Zetetic came from the Greek philosophers, and the short version is that it meant you shouldn’t believe anything but your lying eyes. Earth looks flat? Then it is. Those “scientists” were just pointy-headed atheists who were trying to pry you away from God, who clearly said the earth had corners and pillars and that Joshua made the sun stand still which how could it do if the earth were moving anyway hernggh??

It is very distressing to read how all the pieces familiar to us today from the evolution wars were already in place: shyster pitch-men who may or may not believe what they’re selling to the rubes; the appeal to Scripture as an absolute truth; the scalding vituperation towards science and fact; and the refusal to countenance any evidence that contradicts the Holy Word of whoever it is that’s telling you that the Earth is Flat.

One bit of “evidence” that the zetetics found irresistible was that no sane person could possibly believe that we were on a globe rotating at 25,000 miles per hour, hurtling around the sun at 67,108 miles per hour. Any child could see how that was an insane lie: we’d all be flung from this supposed sphere into the skies.

If you get to spend any time with the stars at night, one thing that impresses itself on you is how they’re always the same. Javert was right in staking his moral imperative on them; they never change. (The fact that his moral imperative was wrong need not concern us here.)

For the ancients, the stars loomed much larger, of course. Every night was a complete blackout for them, and the view of the sky every night was spectacular in a way that requires us to take trips to Monument Valley to see.

And every night, the stars were the same. You saw the same patterns, the same groups, the same brightnesses, every night. You could identify them. You would notice how they rotated around that one star, how as the seasons changed they shifted northward or southward, how the sun rose each morning in specific groups that marched along in an annual procession.

You would notice the regularity of it all, how the sun would rise a little earlier every morning, a little further north every day, until one day in June when it would “stop” and go back the other way.

And then in the winter, after its southward trek, rising later and setting earlier every day, the sun would reverse course and return us to spring. I think I would have started having a party every year that day or something. Maybe something with a lot of lights.

Anyway, it was always the same, a crystal sphere set with twinkling gems, eternal and flawless and unchanging.

Except for those seven stars.

[Disclaimer: I am in no way responsible for any time suck occurring because you clicked on that link.]

Here we have Venus (on the top) and Jupiter in what is called “conjunction,” and it is easy to see why. The photo is from the great site Astronomy Picture of the Day, taken on the isle of Elba on Monday, August 21. 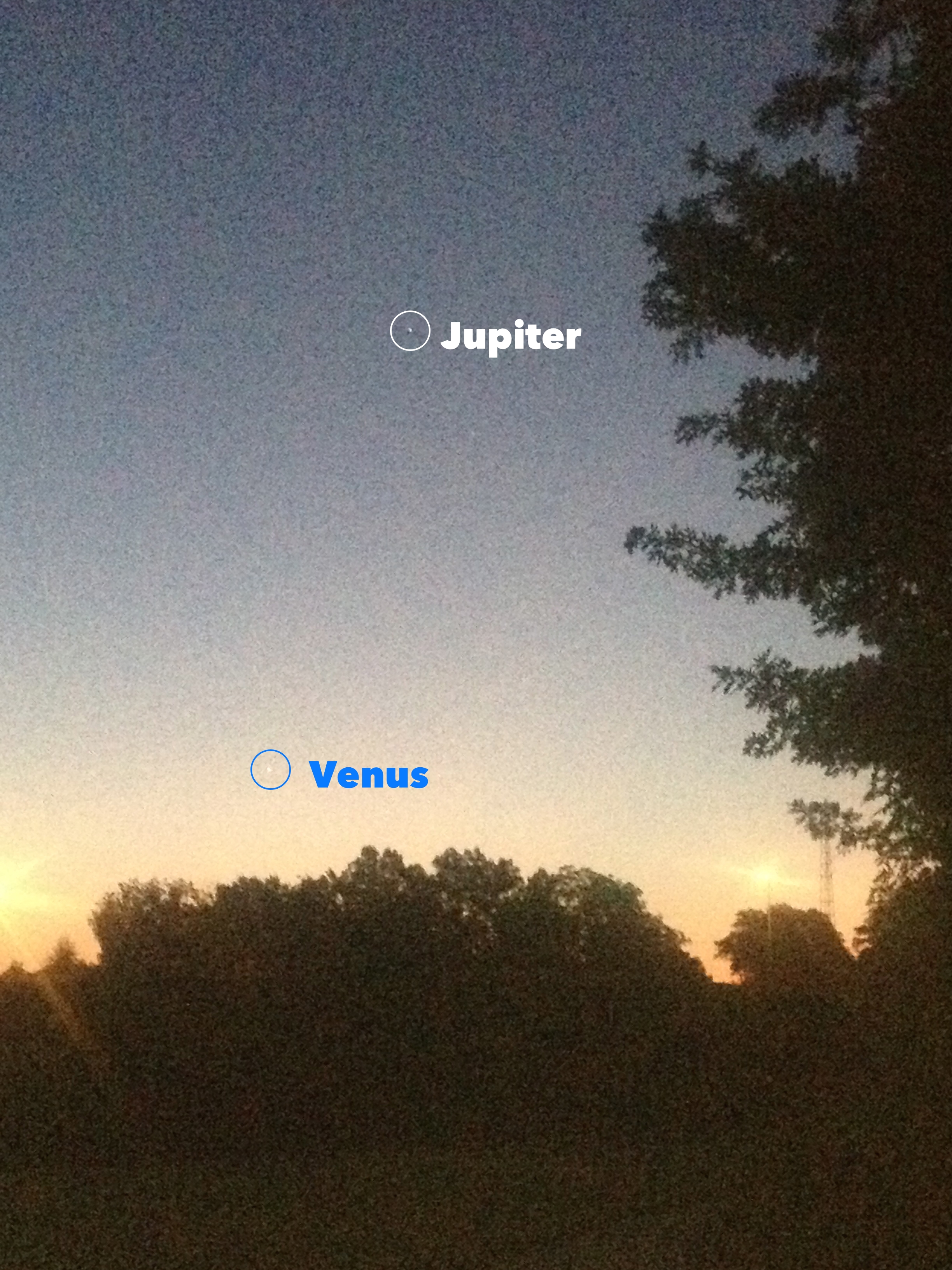 This is what struck me like a ton of bricks: what a staggering thing to look up and see these stars that don’t behave. They are never where they were the day before, and you can see them change on a daily basis. The Greeks had a name for them: ἀστὴρ πλανήτης, “wandering stars,” astēr planētēs. Planets.

If you observed them carefully for a while, of course, you’d see that they too seemed to have regular paths and you could predict things like the conjunction of Venus and Jupiter, or when Mercury would stop in its tracks and retrace its steps across the sky for a while. Doing so required very complicated diagrams if you believed that everything orbited around the earth, which everyone did because NO ONE THOUGHT THE EARTH WAS FLAT, PEOPLE.

You may now insert paragraphs about Copernicus and Brahe and Newton. Blah blah science blah. Have some pictures:

And a couple of movies/interactive sites:

If the moon were only 1 pixel…

To quote the Hitchhiker’s Guide to the Galaxy:

Space is big. You just won’t believe how vastly, hugely, mind-bogglingly big it is. I mean, you may think it’s a long way down the road to the chemist’s, but that’s just peanuts to space.

So here we are, on our morning walk, and knowing what we actually know about the universe and not what our lying eyes tell us, look up again:

Now we can see what’s going on here. Venus and Jupiter. We know that Venus is closer to the sun. We know that Jupiter’s diameter is actually 11 times that of Venus despite appearing smaller to our lying eyes. We know that’s because it’s gazillions of miles further away.

We know that each is heading its own way around the sun—Venus is going faster than we are, Jupiter slower.

And if we stand there and look at those two stars, we can begin to see that the reason they are getting farther apart every morning is that we are hurtling on our path between them at 67,000 mph. Jupiter is falling further behind to our right, and Venus is scampering on ahead on our left.

See the line formed by Venus/Jupiter? That’s the ecliptic, the plane on which all the planets orbit the sun. (Pluto notoriously does not, but then… well, we know about poor Pluto, don’t we?)

Notice that it’s at an angle. A 23.5° angle. That’s how much the Earth is tilted from the perpendicular to the ecliptic. It’s what give us seasons; it’s why the sun moseys from north to south and back again, solstice to solstice. We’re tilted in space, and here we can see it.

So there I am, looking at these two beautiful points of light in the morning sky, and when I think through all of these things, I get a very very real sense of the ground beneath my feet moving at 25,000 miles per hour towards the rising sun, while tilted at a 23.5° angle, zooming towards and between those two lights through vast, empty spaces.

It is no wonder that our Flat Earth friends rejected out of hand these marvels—it’s so much safer to believe your lying eyes, isn’t it?