In an alternate universe, I would be nervously packing and repacking for to leave for Burning Man next weekend.  In this one, I’m just now getting started on a couple of items for Alchemy, the north Georgia Burn in October.

Each officiant in 3 Old Men is responsible for creating his own staff.  (Quick recap: the bare-chested officiant wears a long ceremonial skirt of monks cloth and carries an 8-foot staff.)

The staff must be eight feet long with specific markings:

Within this framework, though, it is up to each man to create whatever staff he wants to hold.

So with that background, here’s the first installment of the making of my staff.

My base is nothing more than a 2-inch round from Home Depot.  I’m going to be staining it, and so my first step was to build some stands to hold it off the tarp when I do that. 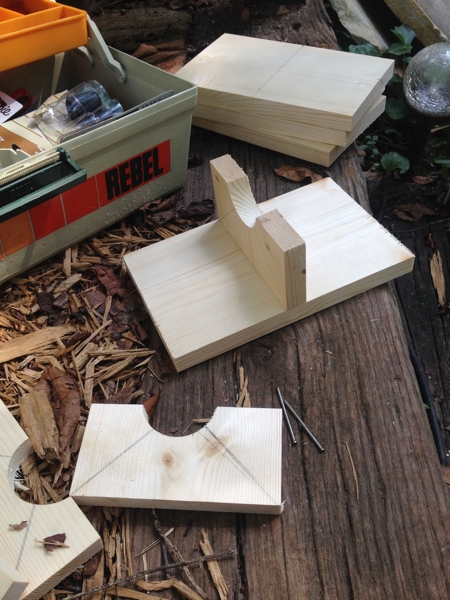 It was great fun dragging out my radial arm saw and my drill press.  As my friend Craig says, having the right tools is a joy forever.  Of course, he has this sizable quonset hut on his property with a real shop, so his joy is even greater than mine.

Still, it took no time at all to cut up a 1×6 into pieces, drill a 3-inch hole in some of them, split them, and then nail them to the bases.  I ended up with eight of them, so we could actually gussy them up a bit to serve as actual ceremonial pieces to hold our staves. 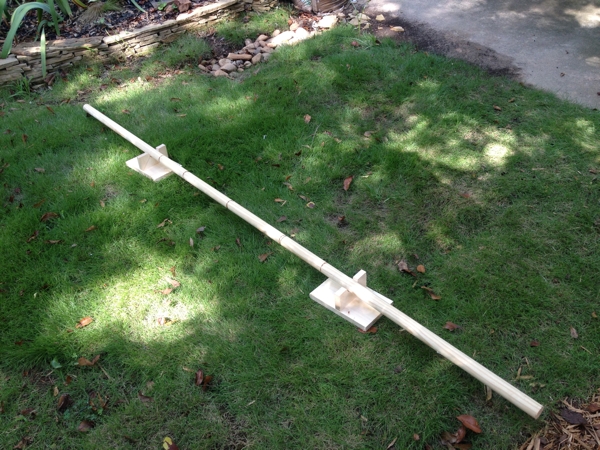 You can see the markings on my staff.  Close up:

I went out to Craig’s nifty workshop, and he rabbeted out those grooves for me.  I shan’t explain them.  I think I’m just going to show you each step of the process and let the staff grow for you as I work on it.
I sanded the staff, and thus endeth Day 1 of the making of the staff.