Look what came in the mail today, you guys! 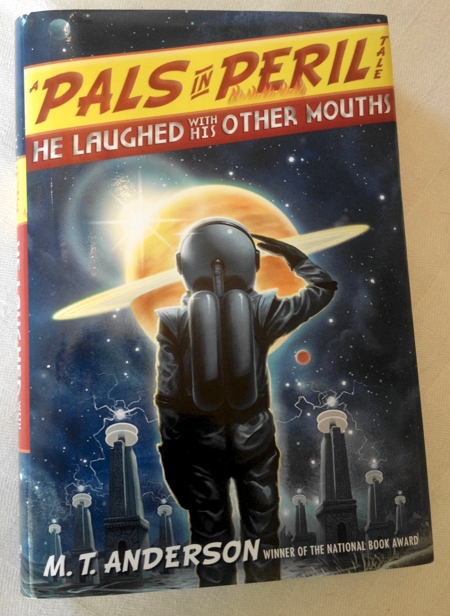 I haven’t really blogged about M.T. Anderson’s Pals in Peril series, and so now I shall.

M.T. Anderson is a whiz of a young adult author whose range is fearsome: the dystopian classic Feed (you will never ever again think that Google Glass is a good idea); the alternative Revolutionary War history of Octavian Nothing; and on a completely different level, the awesomely silly Pals in Peril books.

It began with Whales on Stilts, and I was hooked.  Anderson took on the world of children’s book series and scored a direct hit. Lily, our heroine, is nothing special (although her dad obliviously works for a semi-cetaceous evil genius), but her friends Jasper Dash and Katie Mulligan lead such exciting lives that they’ve had whole books written about them.

Jasper Dash, Boy Technonaut, seems permanently suspended in 1930s brio.  (Think Tom Swift.)  Katie lives in Horror Hollow and is always having to deal with creepy supernatural goings-on.  (Think R. L. Stine’s Goosebumps.)  All three save the world from whales on stilts (with lasers!) in the first book, and from there it gets really silly.

Anderson is very funny, with the potshots at children’s literature and popular culture embedded so cleverly that most young readers will never see them.  But for adults of a certain age (mentally 9-13, I’m thinking) his wit is devastating.  Here’s a simple descriptive passage of their hometown:

Pelt—where Jasper, Katie, and Lily lived—was not a very exciting place… To pep up business on Main Street, store owners had put mannequins out on the sidewalk, advertising dusty sweaters or pillbox hats, but the mannequins were just assaulted by gulls.

No kid could possibly recognize the reference to Hitchcock’s The Birds, but the discerning adult will already have laughed out loud.

The pinnacle of the series so far is the third, Jasper Dash and the Flame-Pits of Delaware, in which Anderson’s world-creation is so supremely loopy that to this day it is one of the funniest books I have ever read.  It’s as if the absurdist anarchy of Green Acres were translated onto an earnest children’s adventure tale: much to the astonishment of Lily and Katie, every goofy thing that Jasper mentions turns out to be true in spades, up to and including the monks who live in grand seclusion in the mountains of Delaware.

[Our heroes are in Jasper’s Gyroscopic Sky Suite (because of course they are) heading to Dover to begin their trek to the monastery of Vbngoom in the mountains of Delaware.]

“Okay,” said Katie, “I really am only going to say this one time… [list of incorrect things Jasper has been saying about their destination] …and there are no—hear me—no no no mountains in—”

Its domes and minarets lay before them, glowing gold in the sunlight amid the hanging gardens, the pleasant palaces, the spired roofs of ancient temples; in the harbor, the purpe-sailed ships of Wilmington plied the waves, and the dragon-headed prows of the barbarian kingdoms to the south dipped their oars in wrinkled waters while plesiosaurs turned capers at their sides.  The Zeppelin-Lords of frosty Elsmere drifted above the city, their balloons gilded with the tropical sun, eating sherbet on their porphyry verandas.  Huge tortoises fifteen feet across lumbered through the widest avenues, carry nomads’ tents upon their backs.  Processions wandering through the streets glittered with gold and ancient costumery.

Grand silliness, and yet at the end of the book I found my eyes quite moist as Anderson describes the monks of Vbngoom flying joyfully from trampoline to trampoline between the crags of the monastery, celebrating their victory over the robot gangsters.

But here’s a weird thing: I thought I had a copy of Jasper Dash, but I must have given it away—so I ordered a paperback copy, and Anderson has changed the ending.  It no longer includes that passage, with its boom camera pullback and pan up to sky and fade to black.  Instead, the writing fades into a montage of adventure themes before fading to black.  There’s a new appendix with the “state song” of Delaware, plus a copy of the letter the actual governor of Delaware wrote to Anderson, deliciously funny itself.  (Early in the book, Anderson excoriates writers who spend a couple of weeks in a country and then write books about the place as if they truly understand it.  He assures us he’s not that guy; he’s never even been to Delaware, so he’s completely untrustworthy.  However, since Simon & Schuster value accuracy in their books, Anderson instructs anyone who finds an “error” in his geography, etc., to put that in a letter and send it to //page turn// the Office of the Governor, followed by the full address of the Delawarian governor.)

I may have to go find a library copy to see if I’m completely inventing this memory of the ending of the book.

Still, you see why I’m excited about the newest Pals in Peril book.   Something fun without deep meaning to crack open—that’s the ticket!