I think it’s absolutely insane to compose in the morning and then get out to work in the labyrinth after lunch when the day is at its hottest.  Don’t know why I do it.

At any rate, I’ve been slogging away at putting down flagstone around the fire pit.  I’m about 80% finished: 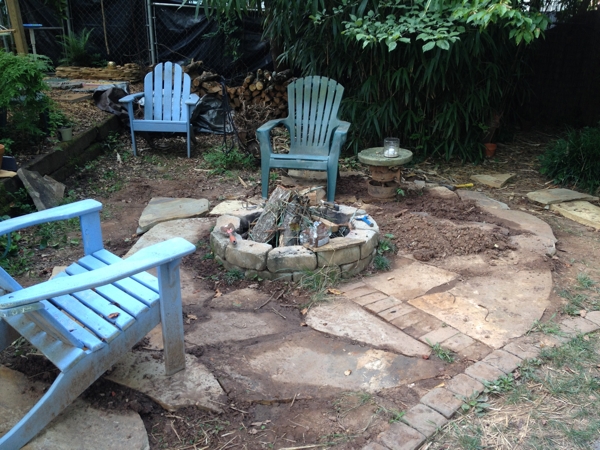 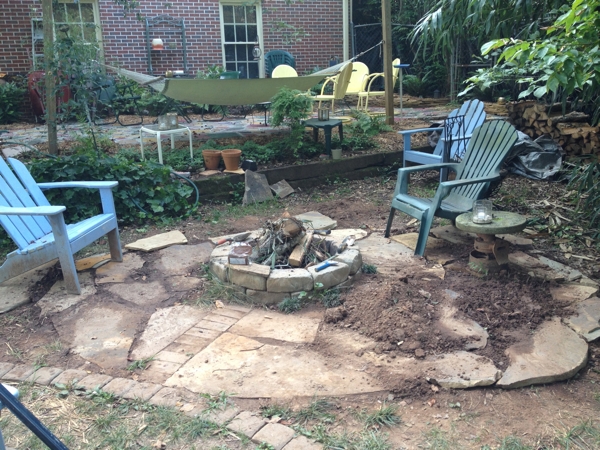 It’s going to be a nice touch.  Going barefoot won’t meant stepping on unexpected gravel any more, if by “barefoot” you mean “with no clothes on” and OF COURSE I DON’T MEAN THAT WHY WOULD YOU SAY SUCH A THING EVEN?

Those who visit on a regular basis will be relieved to see that I am leveling out the area on the right, where it’s still a pile of dirt.  No more feeling as if you’re falling over backwards.  Well, not from the horizontality of the chair, anyway.

It looks as if it’s going to be one more trip to the flagstone store, and then I will be done with that project.

Still struggling with the orchestration of Ariadne’s big outburst. It’s getting better. I’ve added a snare drum, a tam-tam, and the xylophone to the big moment.  Probably too much, but I’m going to let it sit there and annoy me for a while.  I keep avoiding brass for the simple reason that we’ve just heard the brass underscore Icarus’s big moment, and I hesitate to repeat the motif.

In general, I feel as if I really need to start exploring percussion more—it is a 21st century opera, after all.  I can kind of hear all kinds of wild rhythms on the quad toms, but I have no idea how to do that.  (Spoiler: just start slapping notes up there, idiot, just like you do with everything else…)