No work on Seven Dreams today, but I have to mention how much fun Scott Wilkerson’s text is to work with!  It bodes well for the enterprise.  (It also bodes well that he has not complained or even mentioned that I cut about six lines from the “Fly and fall” text…)

A couple of weeks ago a bunch of us were sitting by the fire out in the labyrinth and there was a rustling behind us up on the patio level.  I assumed it was one of the small set of feral cats that flit in and out of our lives, but when we turned to look it was a fully grown raccoon ambling across the yard.

“Oh hai,” it said, apparently surprised that four or five adult humans were sitting by a fire fifteen feet away, and fled.

Since a rabid raccoon had been picked up in the city recently, it was determined by some of our company that I should call the Animal Warden and have her set a trap.  I pointed out that the animal appeared to be perfectly healthy—if a bit absent-minded—and I was loath to depredate the biome like that.

But I did as I was told, and on Monday afternoon I went out to the labyrinth to read and write some letters, and there was a trap in the southwestern corner of the labyrinth.  There was also a cat in it.

It was of course not the one feral cat we’d like to trap and neuter.  This was a youngish feline, one I had not seen before, reddish shorthair, slightly Abyssinian in its aspect.  It was not happy to see me, although it was willing to sit peaceably as long as I didn’t get too close.

This was a dilemma.  I formed the opinion that this was someone’s pet—it didn’t have the clipped ear of a neutered-and-released animal— and I was very unwilling to turn it over the Warden.  What to do?

Fortunately for all of us—myself, the Warden, and the cat—late that night, after the Lichtenbergians had left and I had just finished walking the labyrinth, I heard in the distance a woman calling her kitty—and the animal in question answered most piteously.  It wanted to go home.

So that was that.  I got my glasses and the phone (for a flashlight) and opened the trap.  The cat streaked out of the labyrinth, over every intervening fence in its way, and was gone.  Freedom!

I called the Animal Warden—the fabulous Cyndi Hoffman—and left a message explaining why she would find the trap sprung but empty.  Late this morning (Wednesday) I thought I should check to see if we had caught any more cats. 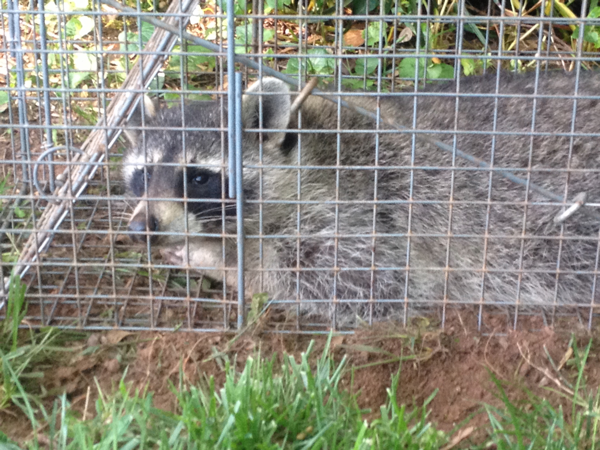 Adorable, isn’t he/she?  Except when you approach the cage and it snaps at you.  It was willing to sniff at a proffered knuckle, but then snapped at that, too.  It did, however, eat the kitty treats I dropped in there, while Monday’s cat would not lower herself to eat such stuff.  Well, they were old.  This disdain of stale kitty bits was another reason I thought she was someone’s pet.   Wild carnivores are not so picky.

Soon, Warden Hoffman arrived and, after I made sure it was not a nursing mother, took the beast away to relocate its adorable ass.

I would like to state for the record that I have no objection at all to peaceful coexistence with wild life, even curious things like raccoons who tend to turn things over and misplace items in the labyrinth when I’m not looking.  But I did as I was instructed and must assume that all is right with the world again.

I did work on “Your Beauty” this morning and I think I’ve made a lot of progress.  We’ll see.  I’m not posting it because you’ve heard the pretty part already, and the part I’m working on now is so inchoate that hearing the computer version would make no sense at all.  I’m pretty sure Finale will let you at some point tell it exactly how/when/how much to speed up a beat, but I’ve never done it.  So before you hear the whole piece—once it’s finished—I will have to explore that.  Otherwise, it’s this stream of stupid-sounding eighth notes that just plop along.  It really needs human interpretation.