As you will recall—and if you don’t, go back and read the previous couple of posts—Daedalus is setting forth the idea that the annual Event, i.e., Icarus’s flight and fall, is a ritual both good and necessary.  It is “the story of us all,” as all good myth should be.

Some slight changes in the main body, but unless you were bugged by something and want to go back to hear if I fixed it, you can pick up the mp3 at 2:30 to hear the changed cadence from yesterday (as promised) and the thrilling conclusion of the section.

I will say that I have now done to Daedalus what I have issues with in many modern operas: there’s not a place for the audience to applaud.  The piece ends softly and will segue into Icarus himself, “Dream One,” so no applause for poor Daedalus.  I’ll make it up to him later in the opera.  After all, Icarus gets seven arias.

I have to say that I think this is pretty good stuff.  Here’s a slammed together idea of what I think is going on onstage: 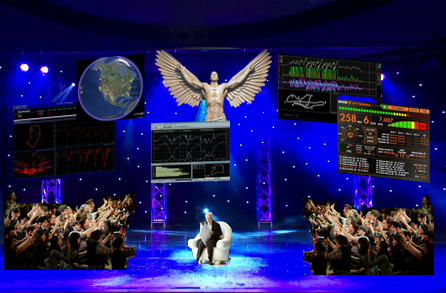 I’ve also started a page for Seven Dreams so we can keep up with finished music.

update: I have a proposed solution to the applause problem: just bring the chorus back in for one more big “Fly and fall!” and wrap it up with a stinger.  We can come back in after the applause as the spotlight focuses on Icarus for his aria.  Compare the last 10 seconds of the above mp3 to this:

Express your preference in comments.

3 thoughts on “Seven Dreams: Dream One, “Fly and Fall””