So after we were overwhelmed by the Grand Canyon yesterday, we decided that we needed to see more of it.  Our first plan was to cancel our hotel in Kayenta, our stopping point for Monument Valley, skip that altogether, and go on to Santa Fe and spend an extra day there.

But the hotel, the Best Western in Kayenta, had a 48-hour cancellation policy and we had already passed that deadline.

Then we decided to push on through, like the troupers we are.  My lovely first wife arose early, walked down to the Best Western there in GC where we had eaten the night before, to talk to their concierge about booking a 45-minute helicopter ride for the morning.  I awoke to find her gone, and when she got back, I had a brief moment to shower, get dressed, and pack.  (You see why I’m two days behind on blogging…)

One cup of coffee later, we were at the Grand Canyon airport, watching a safety video about where to wear our PFDs in case of a water landing.  No really.  There were also some tips about not getting sucked into the tail rotor.

Allow me to say at this point that my slight acrophobia has gotten worse with age, but I’m determined to be game all across this great land of ours, and so when they came in and called our names, I bravely stood and lined up.

There were six of us: an American who seemed as if he might be capable of throwing himself out of the chopper, and three attractive young German friends, about whom I wondered how they could afford a trip to the middle of the U.S., much less this sehr teuer excursion.  I finally decided they were some of the 30,000 Oracle folk who had recently clogged San Francisco.  Rich techies.  Check.

Here we are boarding the tiny, fragile little helicopter: 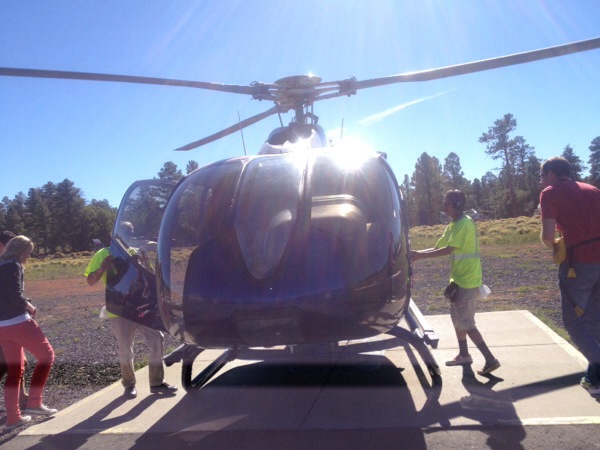 And up we went.  Here are two obligatory “in a helicopter” shots, presented without comment. 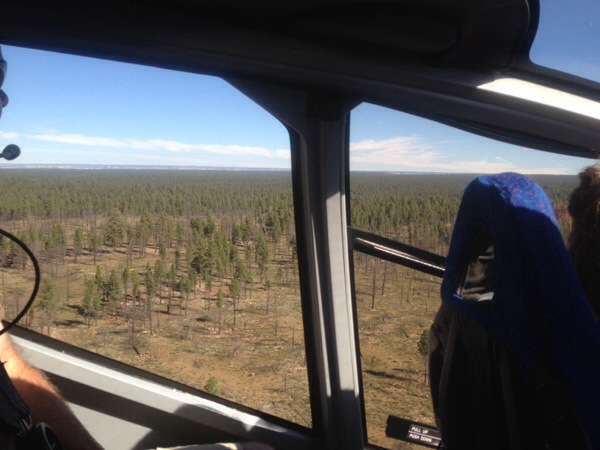 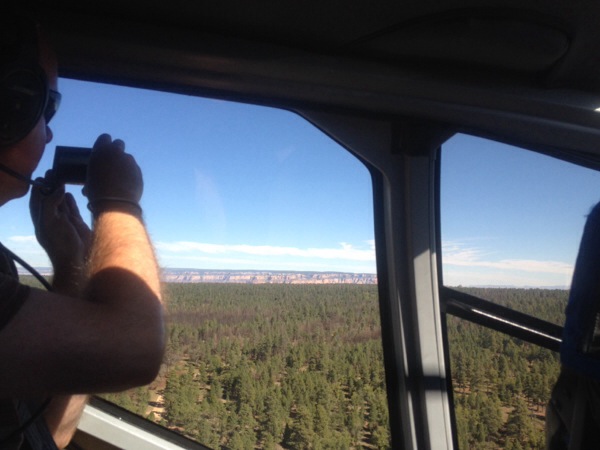 Cameras clicked and whirred.  We cordially ducked out of each other’s way.  A herd of small buffalo-shaped lumps napped beneath us.

We were wearing headsets, partly to drown out the roar of the blades but also to provide narration and communication from the pilot.  When we lifted off, the first track of music was Sinatra crooning “Fly Me to the Moon.”  Cute.

It’s an amazing fact about the Canyon that it really isn’t very visible until you’re right at the rim, even from the air.  We were flying parallel to the rim, as in the photo above, and I figured early on how this was going to play out.  So I had my camera set to video:

Those of you who guessed that they played the opening fanfare from Also Sprach Zarathustra can give yourself a smug pat on the back. 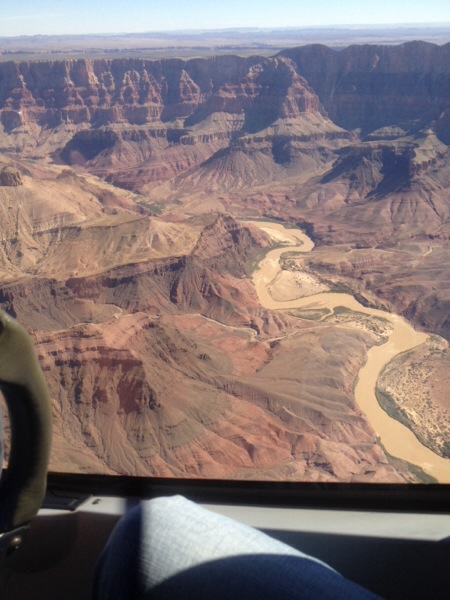 Our pilot, Kara, played narration for us, first in English then in German, accompanied by soaring music. That was completely unnecessary.  I would have cried anyway.  It was that magnificent.

(Yes, the narration referred to the mächtig Colorado.) 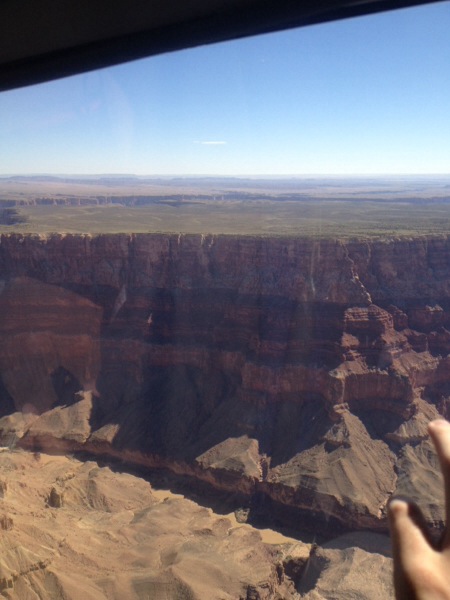 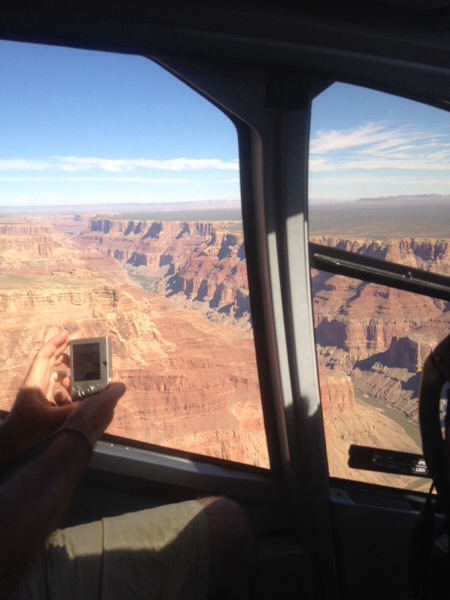 This is the elusive North Rim.  It is hours away by car, and the only road to get there is actually closed right about now.  It’s much higher than the South Rim: last year it got 150 inches of snow to the South’s 75.  Ew. 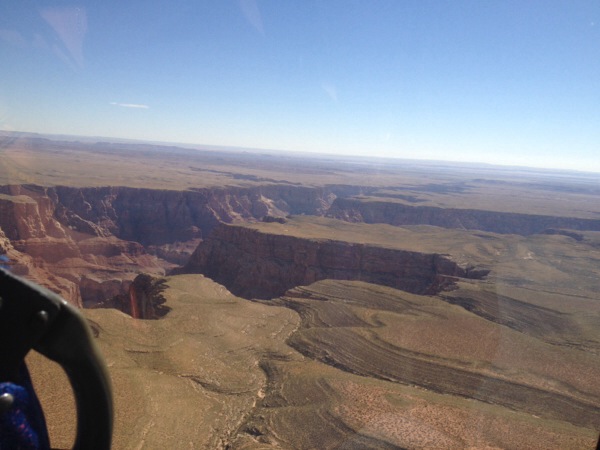 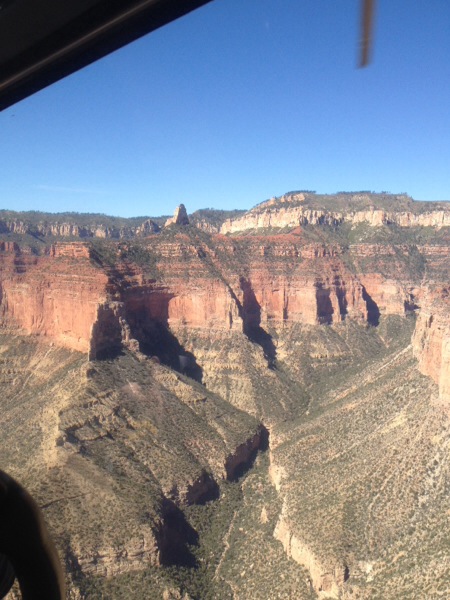 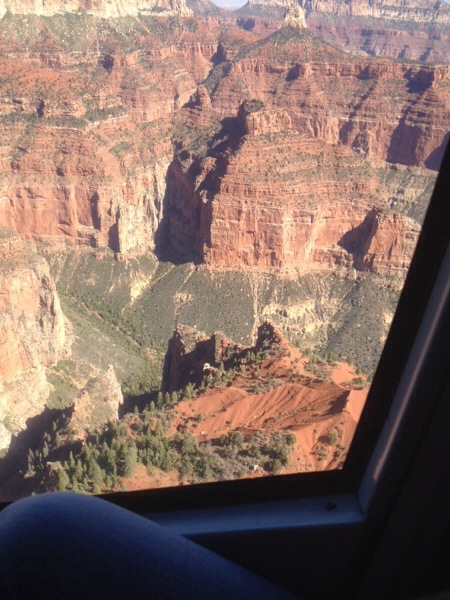 It was an  incredible experience and I was never bothered by the fact that we might have crashed at any moment.  It’s very expensive, of course, but protip: save the money you were going to give to the mob in Vegas and spend it here.  It’s a much better way to throw your money away.

And here is my lovely first wife buying something nice I’m sure in the gift shop at El Tovar, the very nice first lodge built on the South Rim over a hundred years ago.  You have to book it more than a year in advance.  I bought a shot glass. 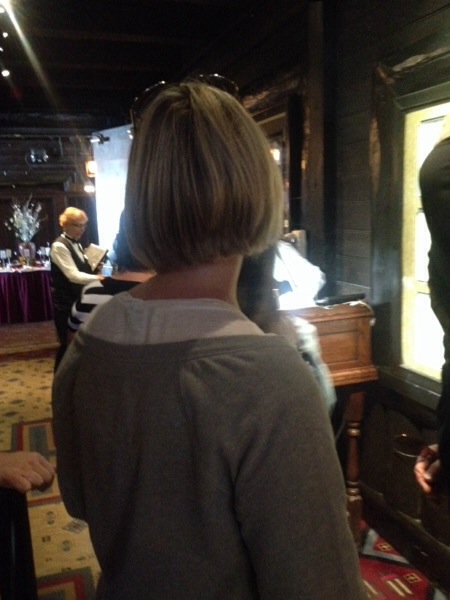 This is most people’s first view of the Grand Canyon, there at El Tovar on the South Rim.  It was almost our last.

You can see my lovely first wife’s hands there at the right side of the panorama.  I’m thinking the whole betting pool has run its course, you cynical asshats.  You’ll just have to start a new one.

From the Canyon, we drove north to Kayenta.  We checked into the Best Western but got back into the car and drove another 25 miles to Monument Valley.

Monument Valley is not a national park.  Straddling Utah and Arizona, it belongs to the Navajo Nation.  You can sign up for tours, but you’re also allowed to drive the park yourself.  Protip: if the car rental place does not offer you a four-wheel drive vehicle, ask for it.  You will need it.  (We discovered only the next day that one of our fog lights was smashed out, clearly from rocks bouncing off the unpaved, rutted road.)

We arrived about 6:00, about an hour before the sun set.  The drive takes two hours.  Off we went!

The landscape is littered with these buttes, strewn across the landscape like so many Trump Towers.  This is one of two Mitten buttes.  There is a left and a right. 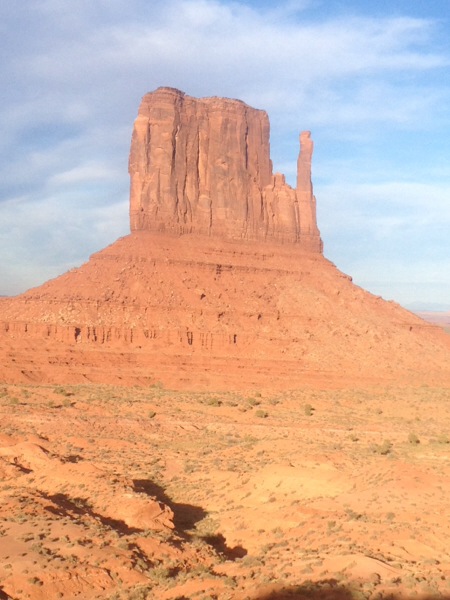 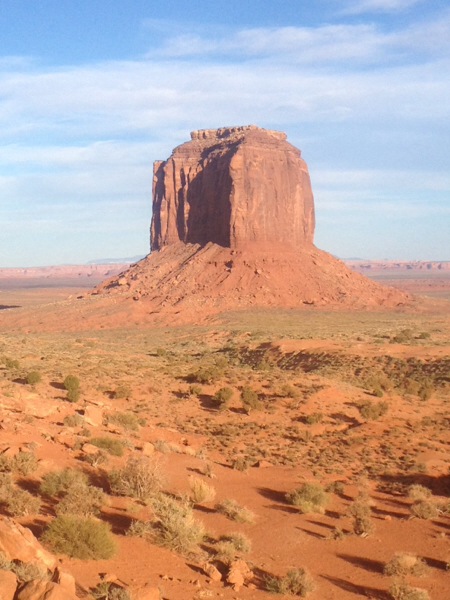 This one and the two mittens are the first that greet you as you grind and toil down the road. 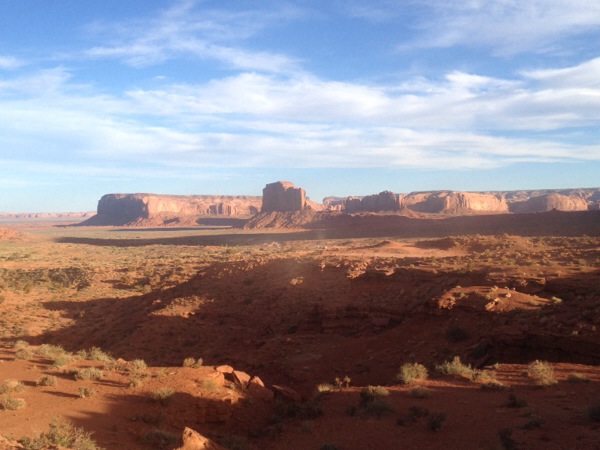 If you’re from Georgia, you may be forgiven for thinking you’ve never seen so much red clay in your life, but it’s not clay.  It’s silt, eroded from the sandstone, and it’s very very fine.  It’s hard to see in this photo, but I’ve crunched into the crust from the last time it rained: 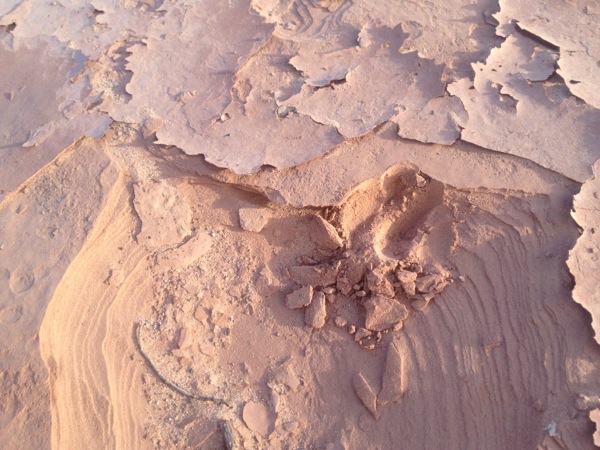 It brought back memories of my one summer in outdoor drama at The McIntosh Trail in the amphitheatre in Peachtree City.  There is a powder makeup called Texas Dirt, and as Mehron puts it in their catalog, it’s “an inexpensive way to make up a large cast as Indians.”  I’m pretty sure it was made from this stuff: 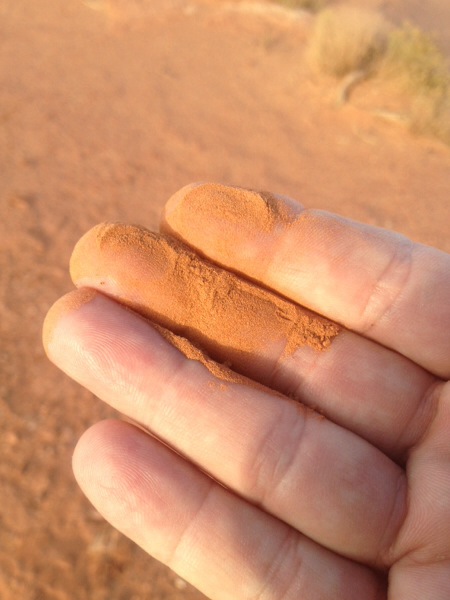 The McIntosh Trail (which we renamed The Mac ‘n’ Trish Trials after our two leads) was written by Kermit Hunter (whose name we Spoonerized into a much ruder but appropriate name for the man), more famous for Unto These Hills and other such summer fare.  This was the grand opening for McIntosh Trail, and it was going to run a long and prosperous time.  In the middle of the summer, Hunter gave an interview with the Macon Telegraph, in which he said—and I paraphrase—the best thing that ever happened to the red man was the arrival of the white man, which to be honest was the thesis of McIntosh Trail.

The actual Cherokees in the cast immediately quit and went home to Oklahoma, including the dancers, and so Glenn Rainey and I were promoted from the Creek Injuns who muttered  rutabaga/watermelon support for William McIntosh, to the fierce warrior dancer Injuns who were all up in his face about how nuhUH were they going to move west and get civilized before the white man caught up to them.  Good times.

This was also the first time, as I reminisced to my lovely first wife, that I was ever completely naked with other men, not having played sports in school, but certainly now needing to shower before heading home after the show.  Good times. 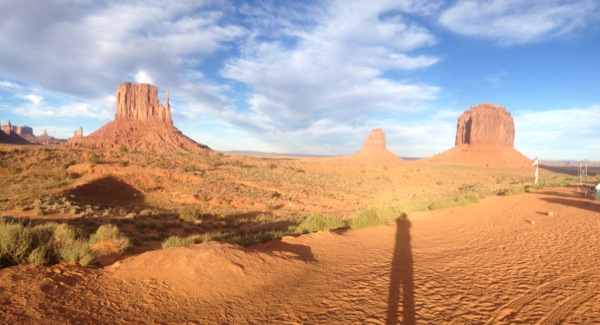 You see my lengthening shadow.

Here’s another hoodoo for you. 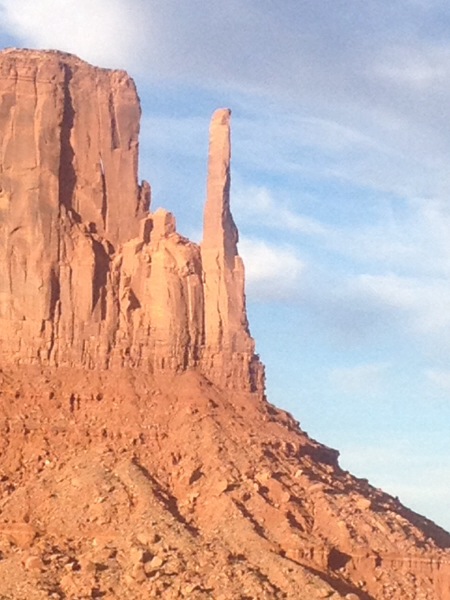 The whole place was magnificently serene—the play of light and shadow across the faces of the buttes and mesas was endlessly fascinating. 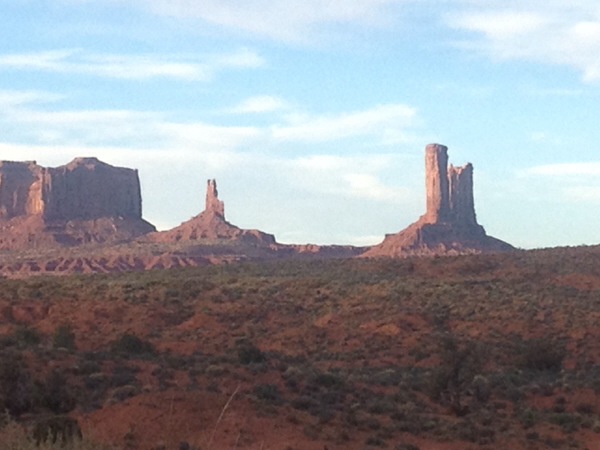 These three hoodoos were called The Three Sisters, supposedly because they looked like a nun instructing two others. 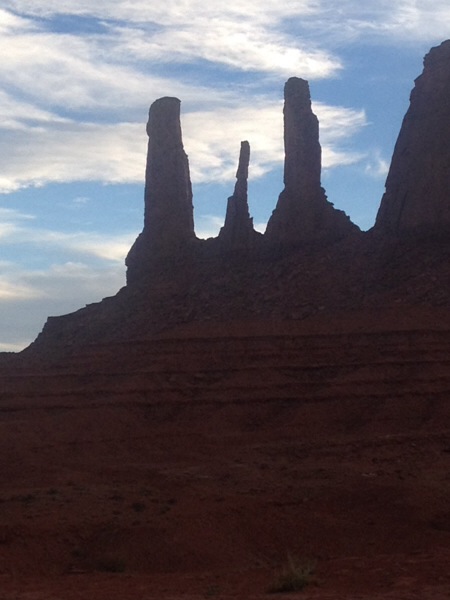 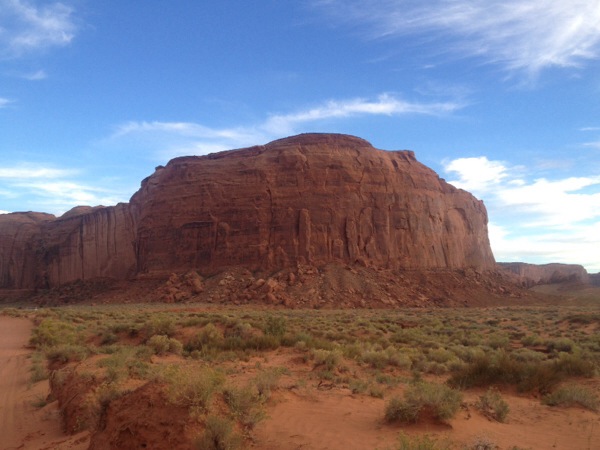 If you look hard enough… 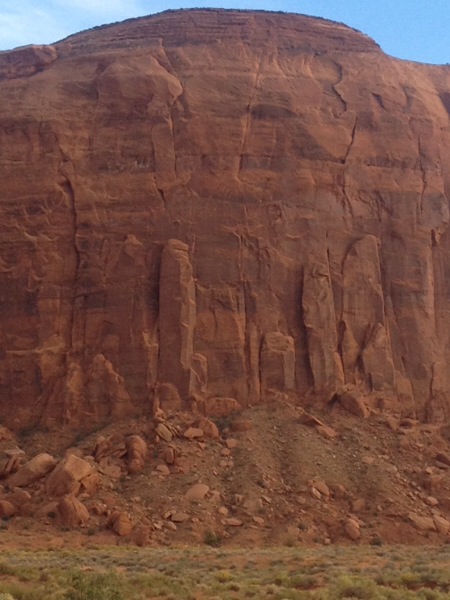 If you don’t get that joke, good for you.

This is a great photo, with the first real clouds we’ve seen since San Francisco: 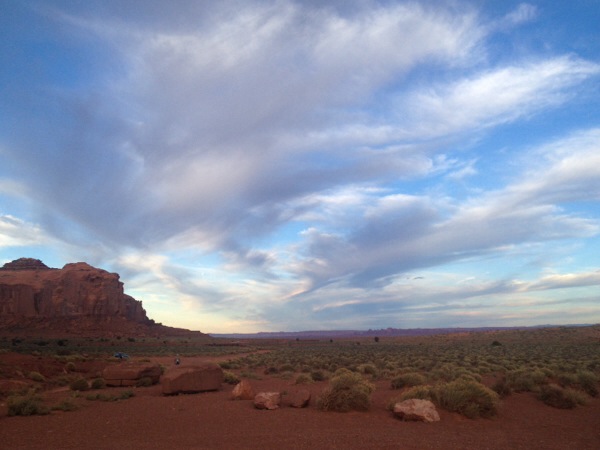 We were bumping along when I suddenly saw this: 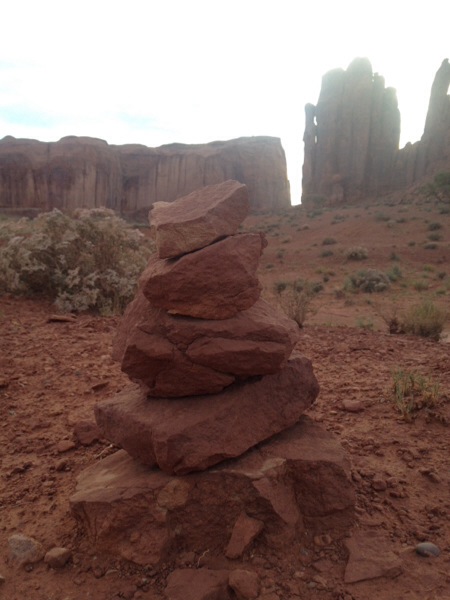 It was a little stone stack.  It’s a thing in some circles.  I added the top one you see here.

And all the time, the sun was setting. 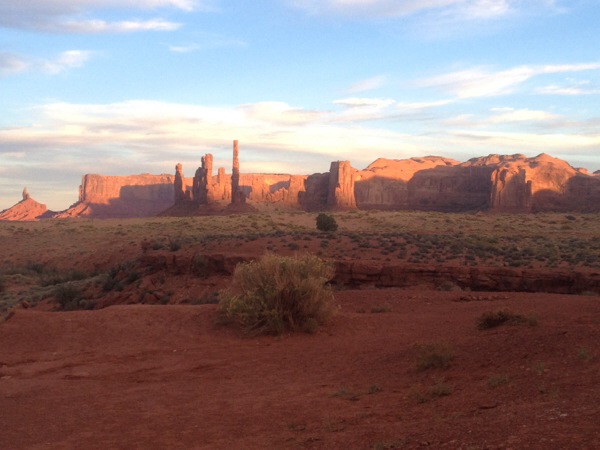 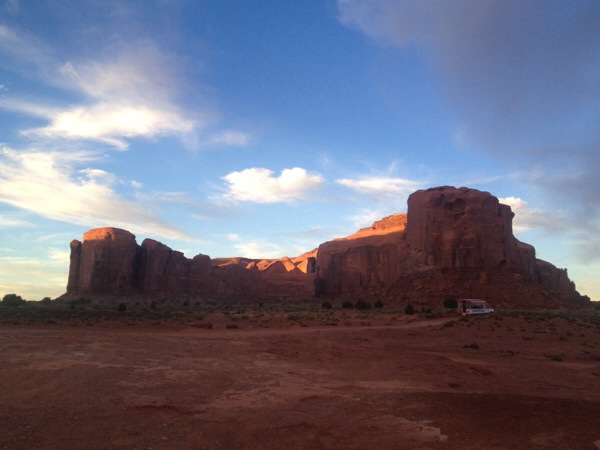 Yes, that’s a domicile you see there.  This is not a national park, it’s tribal lands, and people live out here.  Why, I’ll never know, because it would take you an extra forty minutes to an hour to get home after you got off the highway and turned onto the road.

You can also apply to camp overnight, and my lovely first wife said although she hates the very concept of camping, she’d do it.  That’s how powerful the beauty and energy of this place is, folks.

She also succumbed to the stone stacking thing. 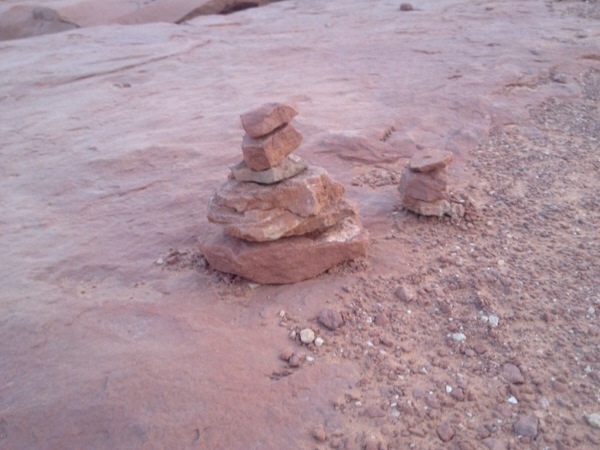 Mine’s on the left, hers is on the right.  I grabbed all the big stones first.

The sun fades even further. 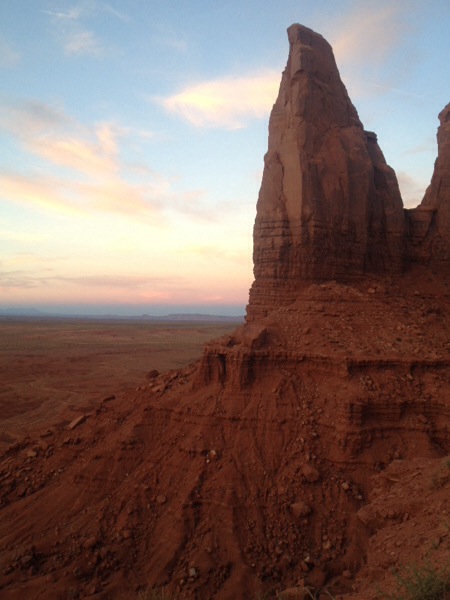 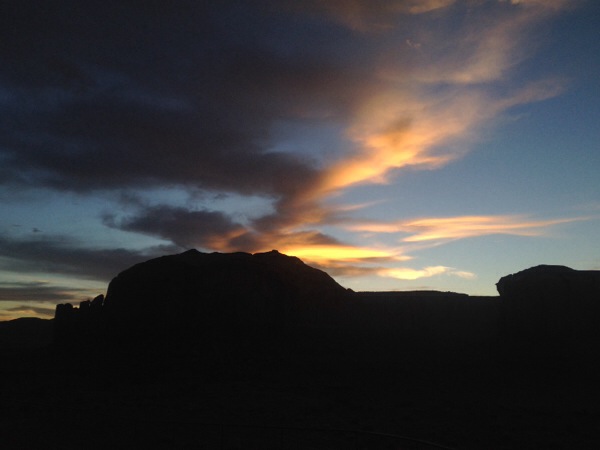 There is no way to overstate the staggering power of this place.  It makes an incredible sequel to the Grand Canyon, and together they leave your mind reeling.

The feeling of sacred/spiritual energy in these places (and in Muir Woods) is palpable, and goes a long way to explaining why Vegas feels so very wrong.

As we were leaving, after exiting through the gift shop of course, I took one last shot. 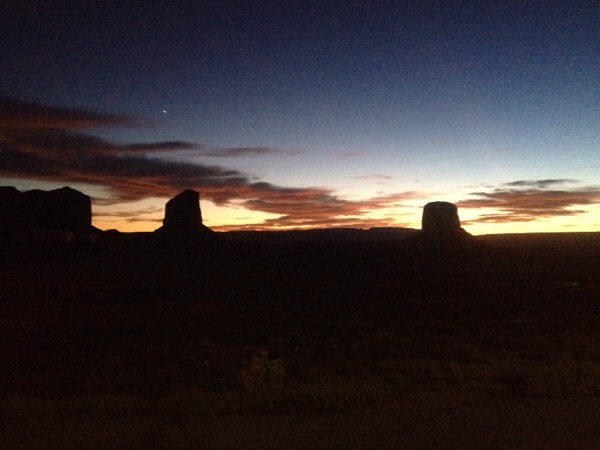