It wasn’t a long trip, only 4.5 hours this time, and it had some fun stuff.

This was the Last Stop (it was not the last stop), and it also had Area 51 cutouts, but we did not disport ourselves with photos.

More tempting was the offer to shoot a machine gun, one presumes out over the vast and unpopulated desert.

Most tempting were the rest rooms inside, where there were multiple signs saying you had to purchase before you peed, but so off the wall was the mise-en-scène that I did not mind buying an ice cream sandwich.

It had all kinds of really wonderfully tacky crap, the real stuff, not the mass-manufactured detritus of Las Vegas.  And in the middle of all of it, I found this: 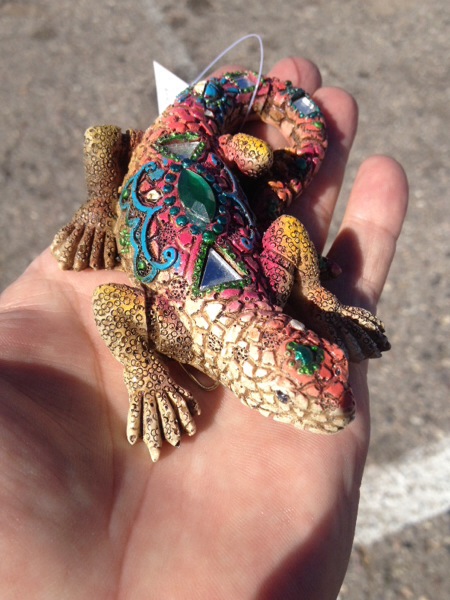 I have recently discovered that I have an affinity for lizards, and this one was actually compelling, despite its prolish status.

Eventually we arrived at our destination, the Red Feather Lodge.  How delightful, as we approached, to discover that the Grand Canyon was on fire. 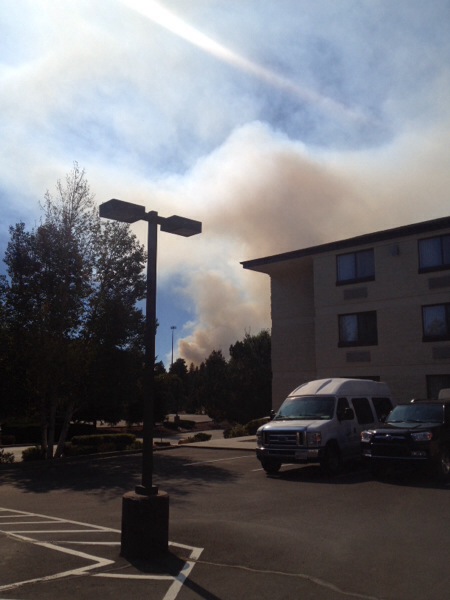 Not really, of course.  Signs everywhere announced that this was a controlled burn in Kaibab National Forest.  But it was exciting for a moment.

We headed to the National Geographic center, where my lovely first wife’s books had told her we could most conveniently purchase park passes.  However, and we knew this before we started out, today is National Park Day, and there are no fees at any of the national parks.  Huzzah!

Rather than fumble our way through our only afternoon at probably the biggest part of the trip, we elected to sign up for a Pink Jeep Tour, the Sunset Tour.  As the jovial dude in the pink shirt behind the counter pointed out, being guided around the park is better than trying to see the sights while not plunging over the rim.  It sounded like a very good opportunity to avoid frazzled nerves and/or disgruntledness.

So woot and all that: it looks as if we will probably both be alive at the end of the day.  Again.

I’m not even going to try, guys, except to say that Congress should fund a trip for every citizen of this country to see it. (When Congress was asked by Teddy Roosevelt to confirm his designation of the area as a national park, it is said that some were not going to vote for it until they saw a painting of the place hanging in the Capitol—whereupon, overcome by the stunning beauty of the place, they voted yes. Can you imagine a Congress that was swayed by aesthetic considerations?)

I once did a lesson with third graders on using the thesaurus. I showed them a video on the Grand Canyon, and they looked up synonyms for “big.” We went out to my oversized bulletin board in the hall, where I had posted pictures of the Canyon, and the kids got to draw their synonyms directly onto the bulletin board paper.

The place is huge. 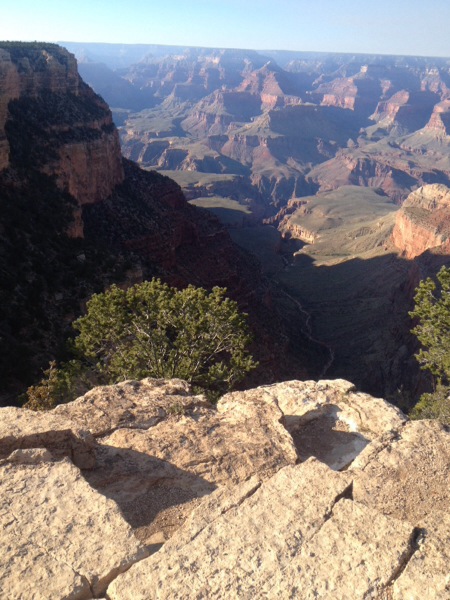 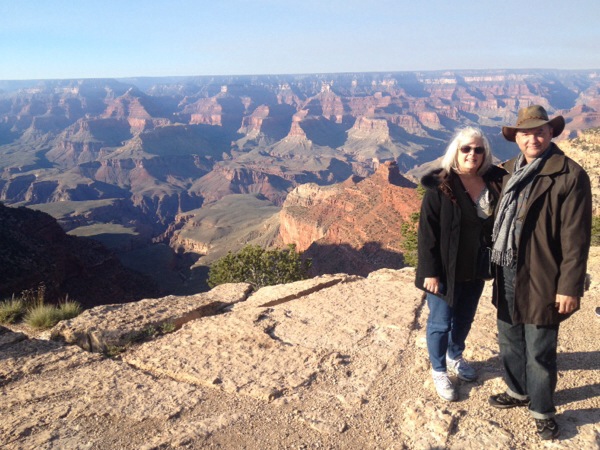 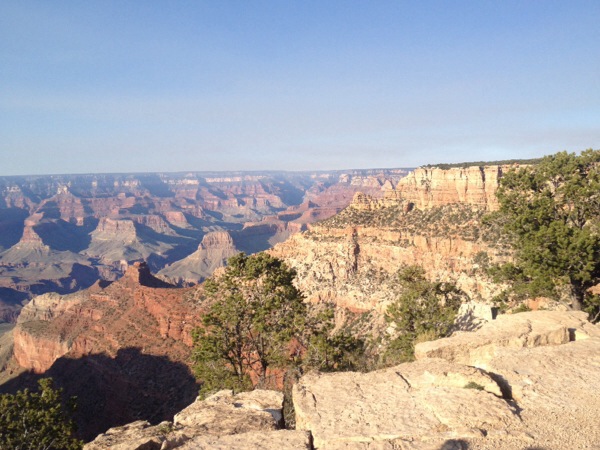 As we drove from one viewing spot to the next, we encountered an “elkjam,” traffic slowed to a standstill: 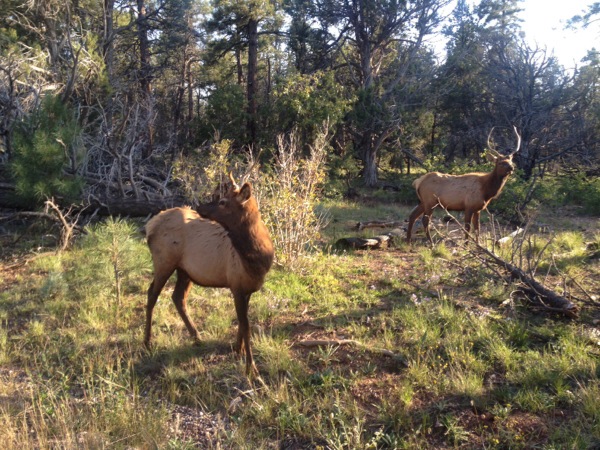 These are just punk teenager elk, but later that evening, we went back out to the first viewpoint to look at the stars—you can only imagine—and on the way back I spotted a fully growed big-ass elk grazing on the median.  I whipped around because some of our party had not seen it, whereupon the animal became annoyed and stalked slowly back into the woods, mooing his displeasure.

This is a hoodoo.  No really.  Look it up; I can’t seem to make a link to the Wikipedia article. 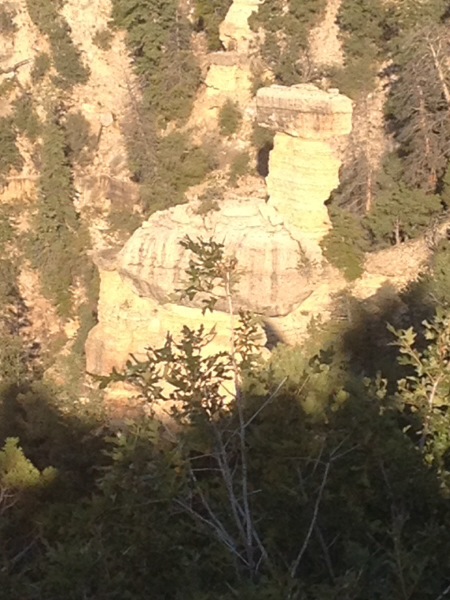 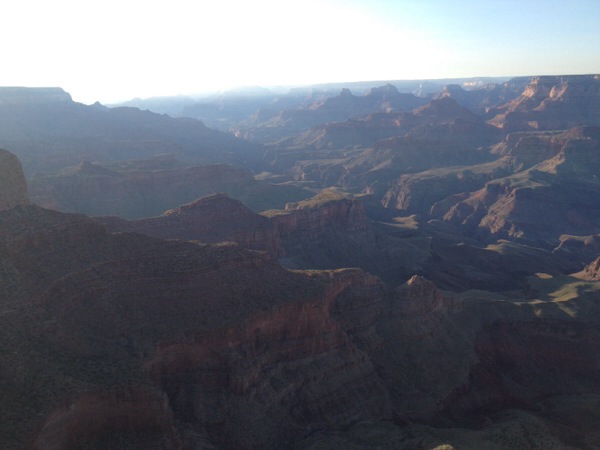 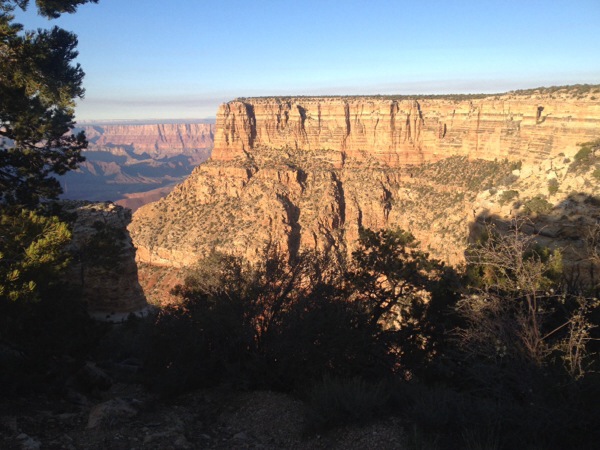 Immense.  A view of the mighty Colorado River. (You have to call it the “mighty” Colorado, or they look askance at you as if you’re not entering into the proper spirit of the thing.) 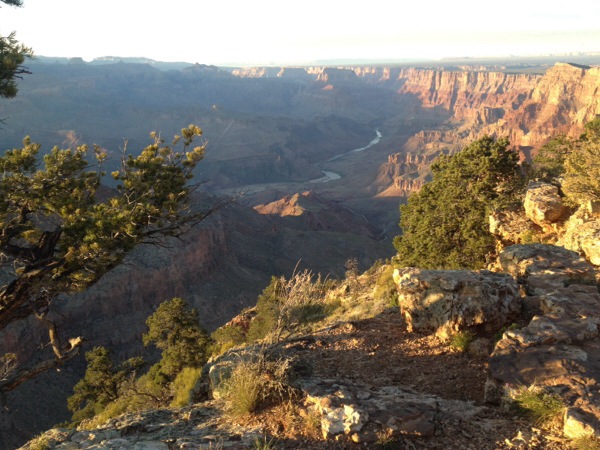 Mary Colter was one of the U.S.’s first prominent female architects. She designed the two lodges in the Village, and the Watchtower at Desert View point. It was part of the original tourist spots in the new park. 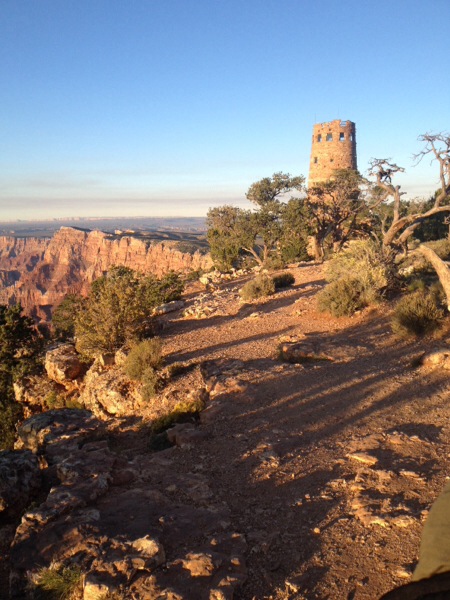 This photo only hints at its mystic beauty. Colter and her crew did three years of research of Native American motifs, both architectural and decorative, and while you think a place referencing Indian stuff would be kitschy at best, you would be wrong. It’s powerful stuff.

Looking down from the third tier. 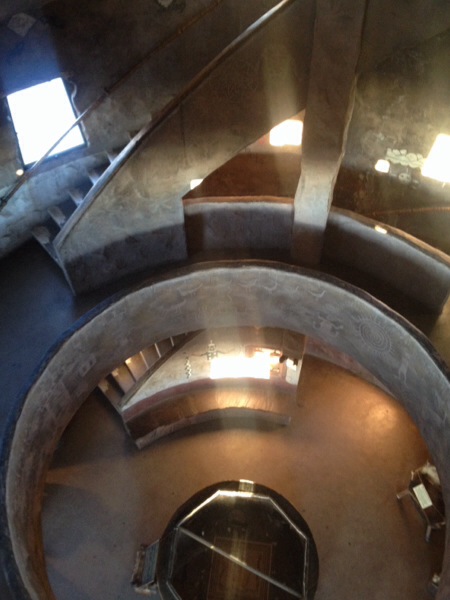 Looking down onto the second tier observation deck. 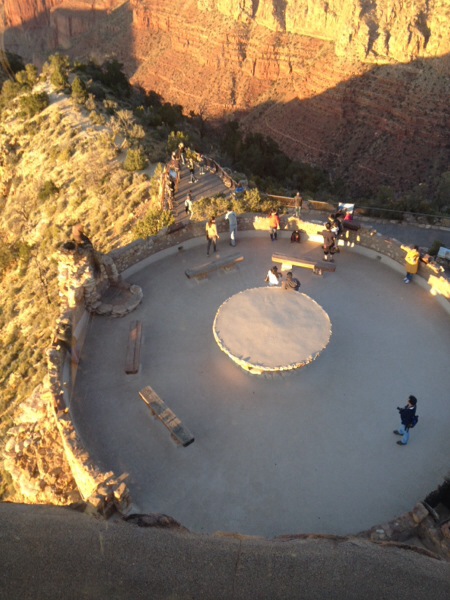 The entire interior is covered by patterns, figures, and motifs painted in the traditional manner(s) by native artists. 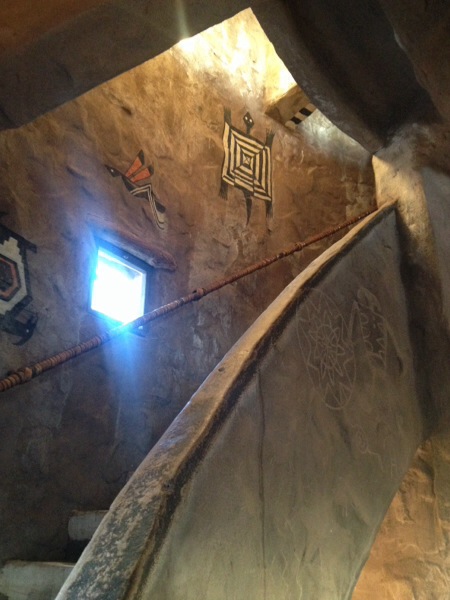 Peeping down onto the first floor. 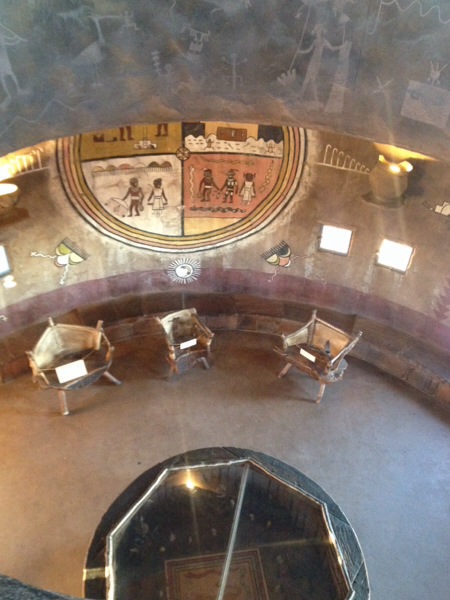 The ceiling on the fourth tier. 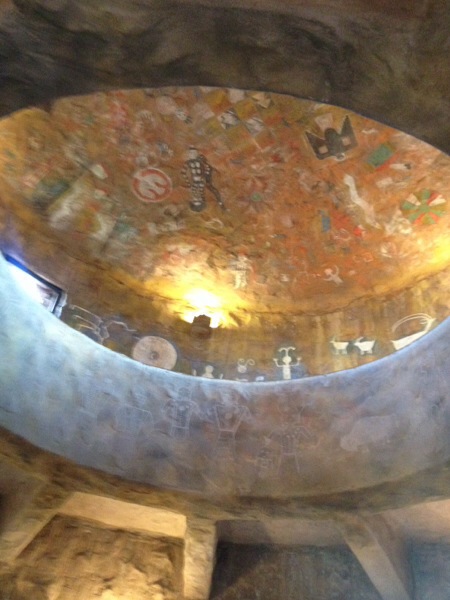 A carved bird figure with the setting sun casting my shadow. 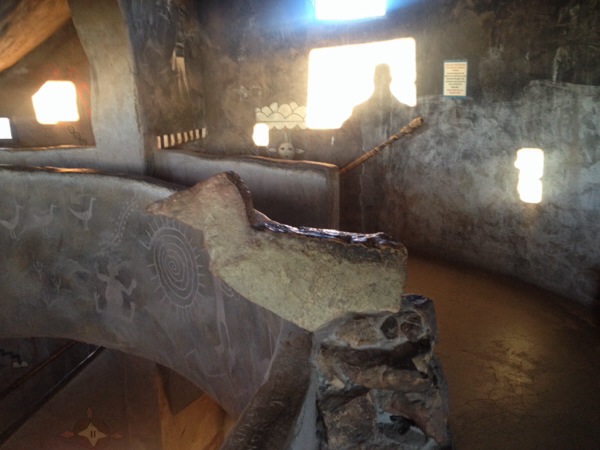 The first floor in panorama. 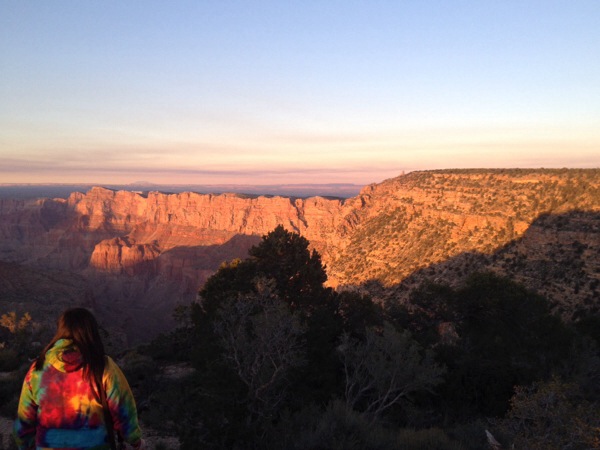 Stupendous. We’re getting ready to watch the sun set.

My lovely first wife at sunset.  How close she is to the edge! 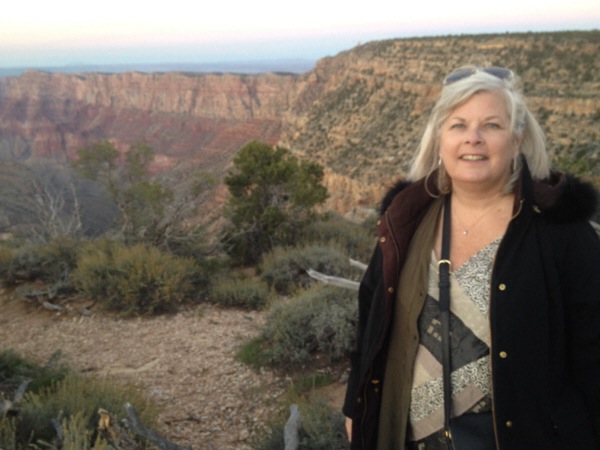 This is the promontory out onto which I clambered to watch the sun go down. 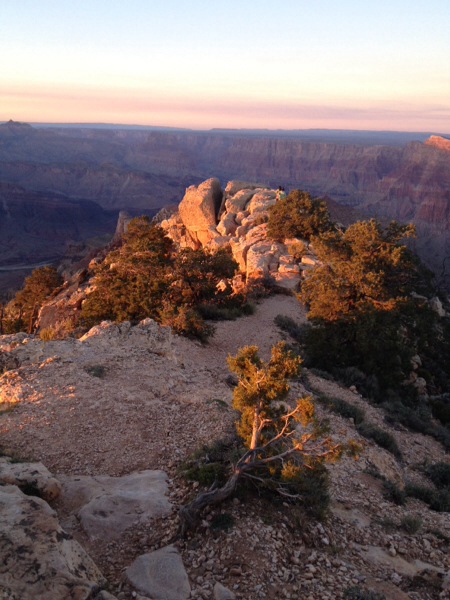 And here I am, courtesy of our tour guide. I have about nine of these, since Amy didn’t know the phone was not making a click noise and so kept shooting. 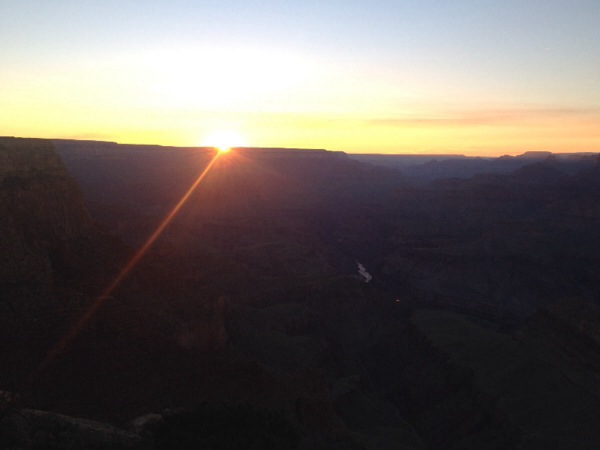 Here I must pause and tell of how my fellow Lichtenbergians and I went on our Annual Retreat last year to the California coast. Driving up Highway 1, which is as beautiful as every commercial makes it seem, we pulled over to watch the sun set. Incredible. So the next day, on the beach, we decided we would come down to the beach the following night to watch the sun do its thing.

And so, as I began to prepare dinner that evening, I looked out the window and realized that the sun had begun plummeting into the Pacific. We all leapt into the car and drive pell-mell down the street to the highway, where from thence we would cross and drive down the twisty access road to the private beach.

Every second, the sun dropped lower and lower, touching the rim of the horizon, and finally sinking beneath the ocean with a faint plop just as we reached the highway. We were all laughing hysterically, and there was nothing to do but turn right onto the highway and drive down to the nearby lookout point, where everyone else was leaving. We pulled in and enjoyed the afterglow. As one does. 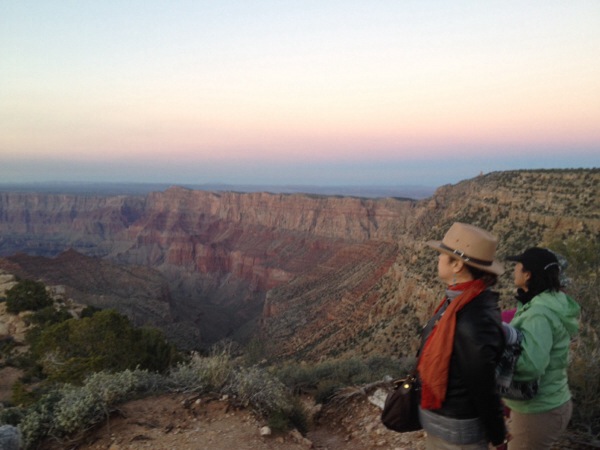