It is a six and a half hour drive from Kayenta, AZ, to Santa Fe, NM, and so after a quick breakfast we set out.

I am here to tell you that after a couple of hours of driving through northern Arizona and New Mexico, I was ready to try that crystal meth just to see if it would help matters any.

Mainly it’s the poverty that gets to you.   We were accosted several times in Kayenta by unemployed men, begging for money.  The first was after dinner last night, a Sioux gentleman who needed gas money, of course.  We gave him less than he asked for, and then he offered to pray for us, holding our hands and mumbling over us in Sioux. Generous of him and it was touching, but the bedrock poverty of the area is horrific, and it’s evident with every mile you drive.

Yes, the amazing landscape was still there, but there is so much of it.  When we finally got to Shiprock, NM, and there was a river and moisture and green, we rejoiced.  We got to an intersection where a maintenance man was weed-eating the first leafy green plants we’d seen in over a thousand miles, and all I could think was, “Don’t do that!  Don’t kill those weeds!  Leave them—they’ll make you  happy and you won’t need the crystal meth, so much.”

Before Shiprock, we had passed an intersection which led off to Four Corners, but the last sign I had seen had said 32 miles to Four Corners and so we passed it by.  Miles later my lovely first wife realized that the famed location was just two or three miles from that intersection.  And that’s how we missed setting foot in Colorado.  Such short lives we live.

Farmington was even greener with even bigger rivers than Shiprock, and then we ascended to a plateau that was actually blanketed with crops of corn. But then the whole thing devolved back into endless eroded landscapes.

The problem with endless eroded landscapes is not that they are endless or eroded.  It is that they are empty.  There’s nothing.  And so when we spotted a tiny pit stop with one unsheltered gas pump and perhaps some snacks inside, we pulled over.

It indeed had snacks, which I needed for some kind of lunch, and it also had a restroom. One restroom.  While waiting in line with others, I struck up a conversation with a lovely lady who looked even more out of place than we did.  She turned out to be an artist from Santa Fe heading up to Monument Valley, and we chatted.  My lovely first wife got a couple of restaurant recommendations from her and her card.

Finally, Santa Fe appeared over a ridge.  We arrived at our hotel, the Las Palomas, a collective of adobe buildings on West San Francisco St. 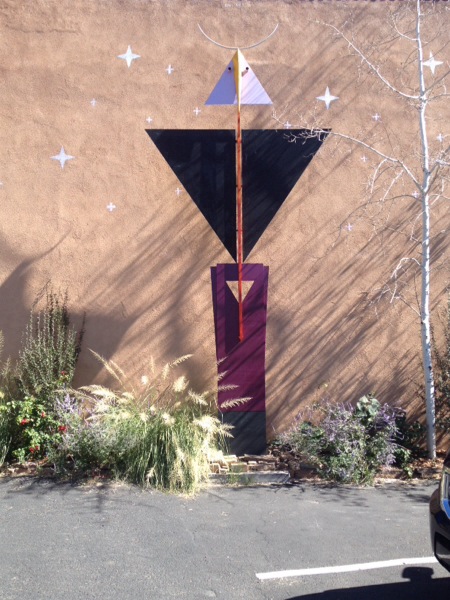 That’s in the tiny parking lot, my dears.  So is this: 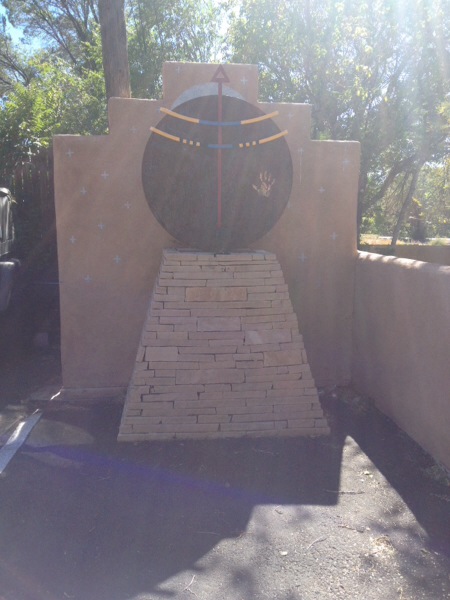 The place is lousy with commissioned sculpture.

Our room was in a little compound across the street, called Pueblo.  Another tiny parking lot, and then the path to our room. 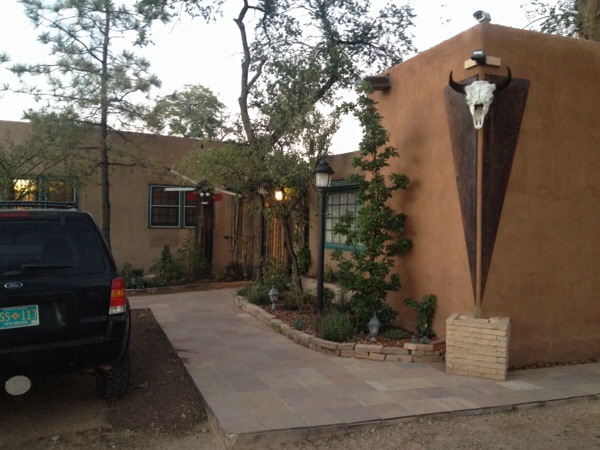 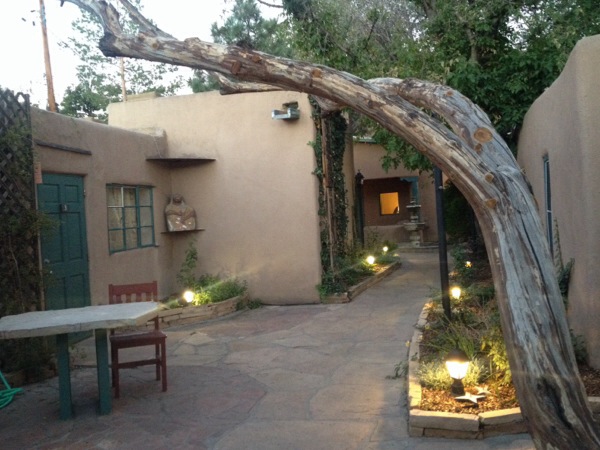 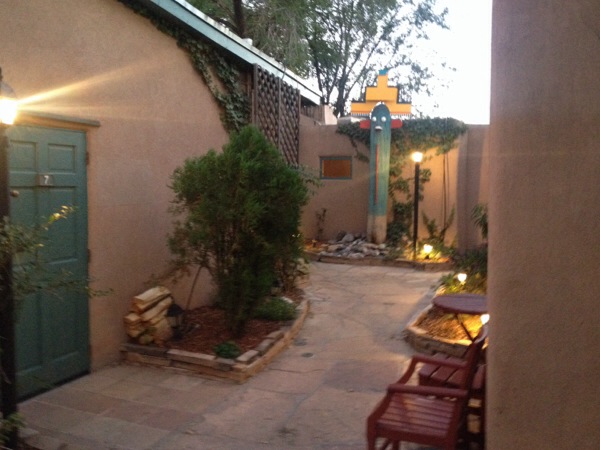 Around another corner to our door… 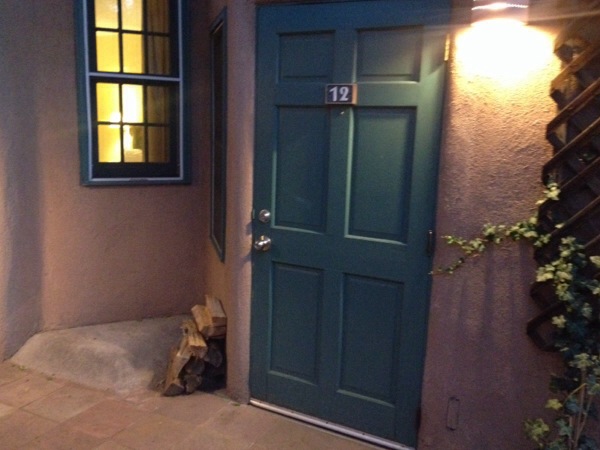 Notice the wood.  We need it for our bedroom. 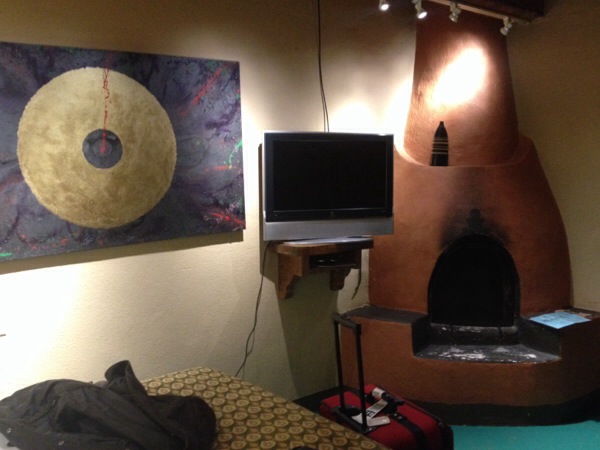 It’s the lovely little establishment, no?  I took the photos after we got back from our walk, so they have the further mystique of dusk, but it’s undeniably engaging.

After dumping our stuff, we elected to walk to the Georgia O’Keefe Museum a couple of blocks away.

This is a small place, and most of O’Keefe’s really iconic works are elsewhere, like MOMA.  But it was nice to see what they had.  I was most amazed and intrigued by her working method: very wet brushes, laid down in supremely confident strokes.  I saw no evidence of exploration or correction in her thin layers of paint.  Of course she sketched and made studies before she tackled the final work, but it was still impressive.

From there we walked over the the Plaza, the center of  town surrounded by lovely shops, most of which sell stuff that was of no interest to the likes of you and me.  There were some items of interest, but since I’m going back tomorrow to purchase them, I’ll wait till then to discuss them.

This is the Cathedral of Saint Francis of Assisi. 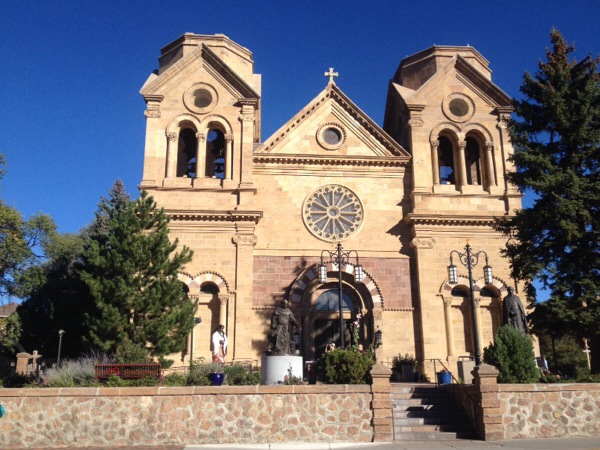 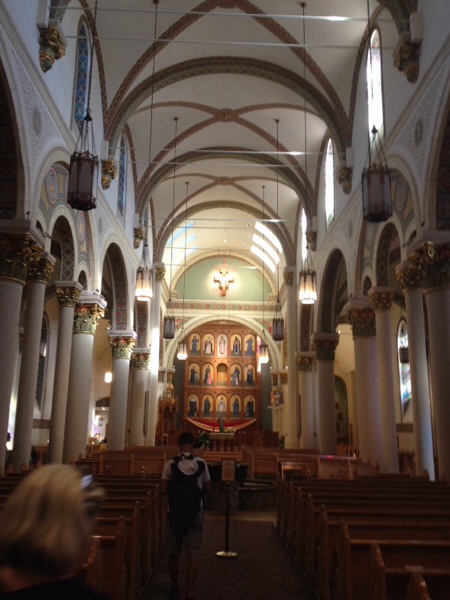 If I have time tomorrow, I’ll go back and get details.

Here she is, for those who are still keeping track. 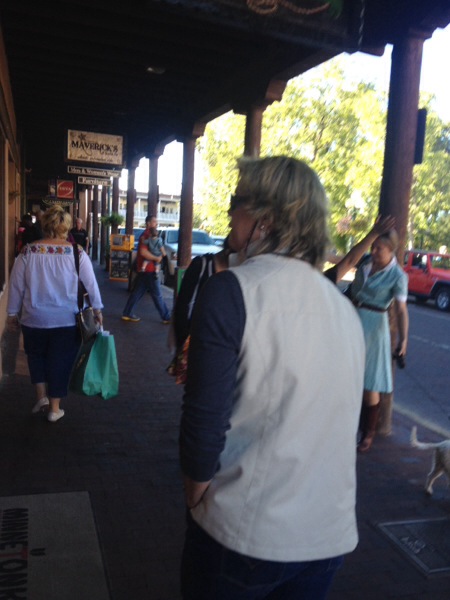 After we left the cathedral, we wandered down some side streets where more interesting vendors were.  I found actual sage smudge bundles: 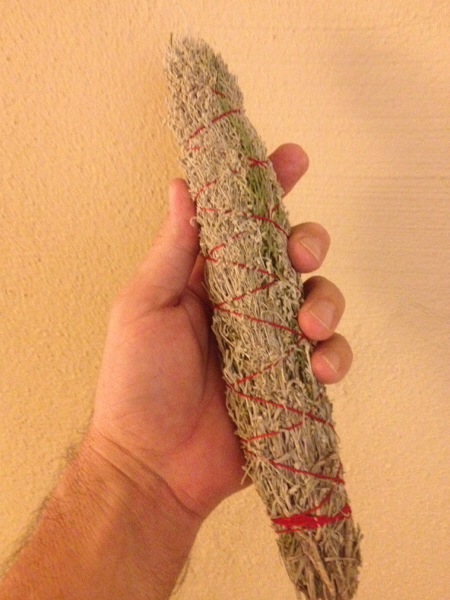 I bought a goodly supply for use in the labyrinth.  All I’ve ever seen for sale in Atlanta is white sage, which is a broader leaf.  It’s fine, but this is special.

We went to eat at Del Charro, recommended by our artist friend, and it was good.  A simple bar/bistro, the food was good and the drinks were solid.

Afterwards, guided by my trusty iPhone, we walked to a World Market and bought two or three tiny bottles of Prosecco, then walked back to the hotel and now I’m caught up on our travels.

One thought on “The Cross Country Caper, Day 8: Santa Fe”