If you are at all of a drinking disposition—and who among us is  not?—you have spent time in bookstores/cookery* stores looking at books of cocktail recipes.  (Other than the two main books I am about to discuss here, buy the Ultimate Bar Book and be done with it.  Or pony up for the iPhone app Mixologist.  Trust me.)

Once your grown-up palate is accustomed to the basics, you start looking abroad, and the first thing you check upon being seated at any new restaurant is the cocktail list.  Do they have anything interesting, i.e., not a sweet argle-bargle for the ladies who lunch?  Leon’s in Decatur always has the most interesting, but not a lot of it is transferable.  What is one to make of their “bullet & trigger”: bulleit rye, zucca amaro, cocchi rosa, cherry, acid phosphate.  Wait, what?  Hold that thought, it will resurface in a moment.

So as I browse through bookstores/cookery stores, one of my fascinations has been cocktails from the past.  What concoctions did our forebears enjoy, how were they made, and why can’t I just step up to the bar and order a “Miyako Hotel Special” without whipping out my iPhone?  I present a couple of those here: 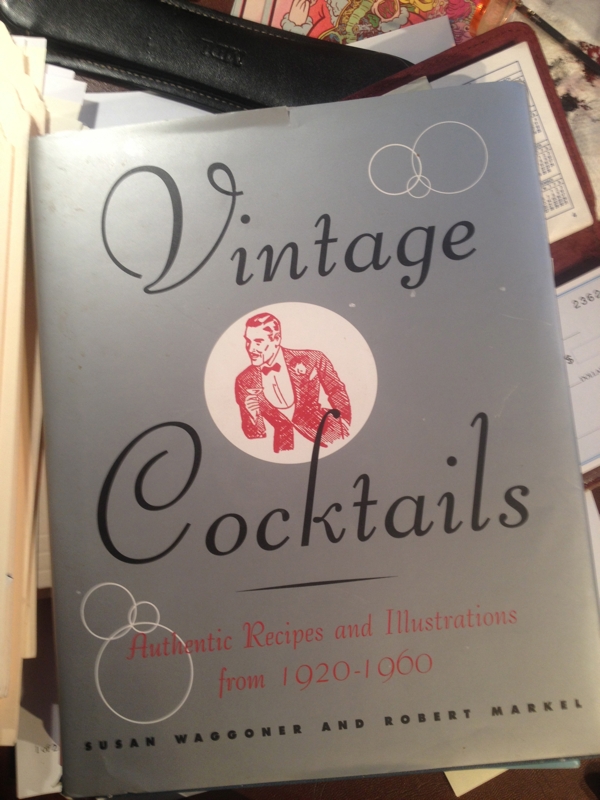 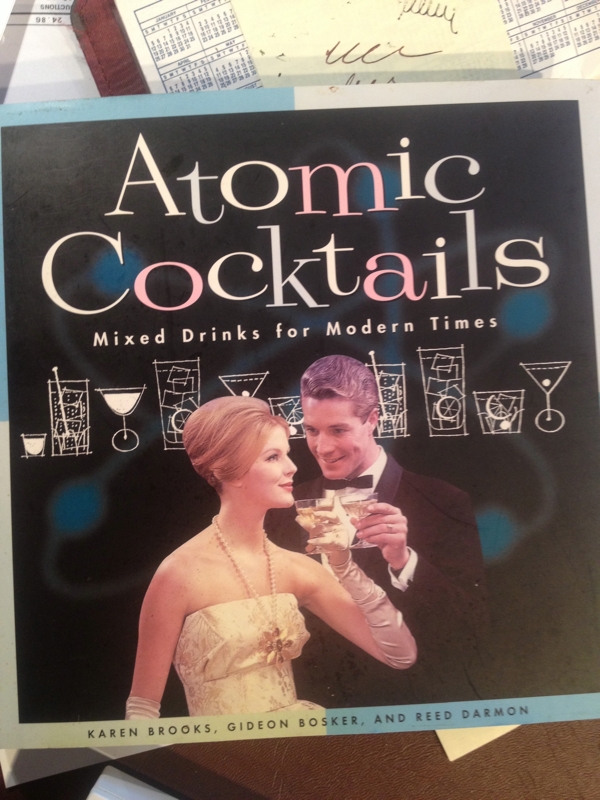 These two are just chock full of COCKTAILS EVERYBODY ALREADY KNOWS ABOUT.  I mean really, a Manhattan?  Or a French 75?  Honey, please.  These books are just hipster posers for novices.

No, I’m talking about the seriously long-gone concoctions that no one any longer orders.  Just imagine Leon’s’s “bullet & trigger” fifty years from now.

Fortunately, I have two books that will sate anyone’s appetite for these things.  The first is Jigger, Beaker, & Glass: drinking around the world, by Charles H. Baker, Jr.  (It’s a re-issue of Baker’s original Gentleman’s Companion, and I just noticed features a new foreword by the authors of Vintage Cocktails.  Oops.) 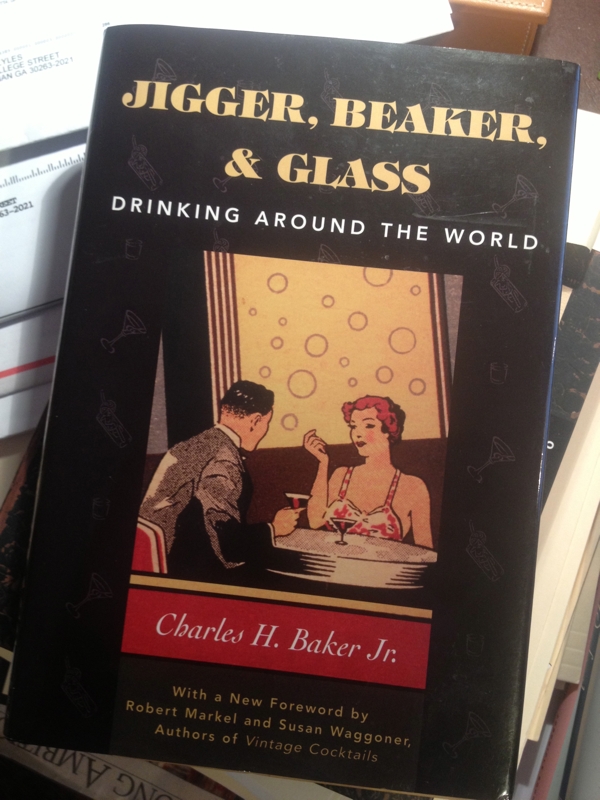 Baker was a bon vivant who swanned around with Hemingway and the gang back in the 20s and 30s, and he collected cocktails.

From the original preface, in which he pooh-poohs Prohibition:

We also doubt if any lemonade social ever afforded a thrill like the moonlit night in Ceylon when we went to a Hollander friend’s beach bungalow out beyond Galle Face, where we swam in the blood-warm Indian Ocean and drank enough of his Flying Fish cocktails to do, and lay on the cool sand and listened to Tauber sing Dein Ist Mein Ganzes Herz on the gramophone.  Then when we swam again we slipped out of our suits to make the water feel better, and finally, when it was very late indeed, we dressed and said goodnight and vowed eternal friendship to our host; then for precisely no reason at all dismissed our waiting carriage with a flourish of gross overpayment and walked all the way back in our evening clothes through a new quiet rain to the jetties and the motor launch, just in time to prevent one of our best American cruising friends from consummating bribery of the Quartermaster on the good ship RESOLUTE into letting him hoist a purchased baby elephant—whom he said was Edith, and over whom he politely held a Burmese parasol of scarlet oiled silk—from a hired barge onto the forward cargo hatch in a sling!

Here he is talking about an actual cocktail:

THE RANGOON STAR RUBY, a Wonderful & Stimulating Cocktail from Lower-Burmah

In 1926 we disembarked in Burmah from a round-the-world ship, and spent several days there before hopping off to Calcutta in a little “Bibby” boat carrying a mess of Mohammedan pilgrims headed for Mecca as deck passengers, and who did all their own cooking right down there in plain sight.  In Rangoon we joined up with several folk in the Strand bar of evenings to chin about the romantic Mandalay country far up the Irrawaddy River, and to talk over gems with Hamid and his brother from Colombo and Bombay, and to acquire a really fine zircon for someone else and a set of star sapphire dress studs for ourself.  One American headed out on leave from certain ruby mining operations up-country told us he had invented himself a drink that everyone up at headquarters liked so well he was going to shout it to the world so that no man might be denied its virtues.  He popped behind the bar before we could say “knife” and whipped up the following mixture which, due to its color, he had christened the Star Ruby.

Take 1 jigger of good cognac, 1/2 pony of cherry brandy, 1/2 pony of French vermouth, 2 dashes each of orange bitters and lemon phosphate, then for added flavour 1 tsp of kirsch, or 1/2 tsp of maraschino.  Shake with finely cracked ice, pour into a wine glass leaving a little ice floating, and let fall 6 drops of grenadine in the center of this chilly expanse for the ruby color touch.

Who can resist that kind of style?  However, the experienced drinkers among us will already recognize a couple of problems.

Our first problem with vintage cocktails: many of the ingredients are no longer freely available.  Lemon phosphate, anyone? (Well, actually…)  It’s like trying to make a bullet & trigger at home.  (And don’t get me started on Cynar, which shows up with depressing regularity in modern cocktails, or at least did last year, and which is unavailable in any liquor store I’ve checked.)

And even the ones that are freely available—who has all that stuff lying about?  It leads to madness, trying to collect all those liqueurs and mixers and bitters and phosphates, and I should know: my bar now occupies the 1920s French pastry display case in my living room, two shelves in the front hall closet, and a separate bar for single malt scotches in the playroom downstairs.  But, hey, I can make you almost anything but a bullet & trigger.

It’s lunchtime, and I will postpone my further ramblings (and the second book) till tomorrow.

* Cookery was the actual, honest-to-God subject heading from the Sears List of Subject Headings the last time I looked.  I think.  The PTB might have changed it to Cooking before I left the media center, but I don’t think so.

One thought on “Vintage Cocktails, part 1”