In yesterday’s post, I began rambling about the joys and challenges of exploring vintage cocktails, those drinks that have vanished from the beau monde for  one reason or the other, and we had gotten to the part where I’m enumerating the problems that arise with this hobby.

The first one was availability of materials, and it’s often a problem in Jigger, Beaker, & Glass, since it’s a reprint of a book from the 30s.  Everybody used to have pastis just sitting around, I suppose, but today you really have to look for it.

It’s not as much of a problem with this book: 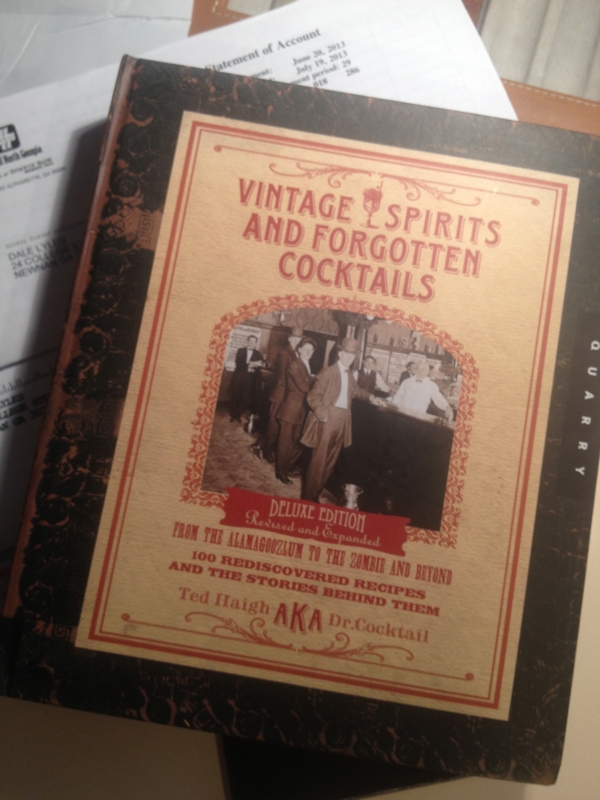 Vintage Spirits and Forgotten Cocktails, by Ted Haigh (no really), is a spiral-bound notebook of 100 recipes, accompanied by their histories and photographs of period bottles, etc.  Mr. Haigh (no really) made availability of materials part of the criteria for inclusion, and where the liquid in question no longer exists he lists acceptable substitutes.  There are still rarities—it took me forever to find Parfait Amour, for example, and that was before I got this book—but on the whole it’s a great book in that regard.

In fact, Mr. Haigh relates how he was involved with the revival of bitters as a staple of the 21st century bar.  I remember recipes calling for something as simple as orange bitters, and for the longest time there was no such thing on the market.  Finally my friend Jim discovered that the Fee Bros. were making bitters again (and Mr. Haigh talks about that), and he sent me a starter kit of orange bitters, orange blossom water, mint bitters, and regular Fee Bros. bitters.  Now of course there are all kinds of bitters on the market.  I’ve added lemon and grapefruit bitters, plus Peychaud’s from New Orleans.  Celery is next on my list.

I have taken to writing notes on the drinks in the margins, both in Forgotten Cocktails and J/B/G, so that I remember from one exploration to the next what I thought of any particular drink, including any notes to changes I might make the next time I make it.  I feel like the Half-Blood Prince.

And that leads to our second problem: vintage cocktails often taste funny.  Charles Baker lays down very strict rules about the number of ingredients in J/B/G, so that helps avoid the car crashes of some of today’s libations, but tastes change.  Most of those neo-glamorous Mad Men cocktails, for example, are sweeter than you might be used to.

A great many of the Forgotten Cocktails involve fortified/aperitif wines like vermouth or Lillet Blanc or Dubonnet Rouge, and to my palate they tend to overwhelm most cocktails.  (I am one of those who will shake gin in a shaker, pour it into the martini glass, then spray a light mist of vermouth on top and call it a martini.)  In the front of the book I have written that many of these cocktails have “a sticky/sweet foretaste, a bitter aftertaste, and a vermouth-like overtone.”  I then abbreviate that as SBVO for use throughout the book, and I tend to avoid recipes with more than a hint of vermouth.

Having said that, Forgotten Cocktails is more successful than J/B/G in its selection.  (I don’t think J/B/G was curated so much as poured out.)  Some of Baker’s concoctions are just plain funky tasting; most of Haigh’s are at least valid even I don’t like them.

The problem of taste means that once you’ve mixed one of these and you find that the thing is an assault on your sensibilities—what then?  Be resolute, my friend, and dump it.  Straight into the sink.  Don’t be a man about it and finish the nasty thing, or worse, finish it because it would be a “waste.”  Dump it.

Because we have to consider the third problem: Exploring these recipes can make for a very short night.  You are after all pouring a lot of alcohol down your throat, and it would be smart to stop before consuming three.  Don’t waste one of your slots on a vile drink.  Toss it and pick a new one.

The sensible option, of course, is to make a tiny version using the proportions of the recipe.  Teaspoons instead of ounces, so that you’re swallowing a tablespoon instead of half a cup.

For this you need the following device: 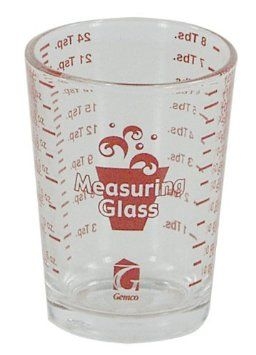 It has a four-ounce capacity, and it’s marked for tablespoons, teaspoons, ounces, and milliliters.  It’s an excellent way to make a tiny Algonquin Cocktail so you can confirm that it has too much vermouth in it ever to pass your lips again, without having to waste a whole jigger of rye.

So what fabu cocktails have I discovered that have become part of my stable of offerings?

The Miyako Hotel Special is one of my earliest discoveries (in J/B/G): gin, Grand Marnier, pineapple juice.  Yummy.

From Forgotten Cocktails so far:

The Monkey Gland: gin, orange juice, grenadine, absinthe (This one is phenomenal!)

The Pegu Club: gin, Cointreau, lime juice, bitters (This one is also phenomenal!)

Those are the ones I’ve tried and would repeat.  There are quite a few I haven’t tried yet for lack of the proper ingredients.  (Swedish Punsch, anyone?)

I like my hobby—it’s always a blast to discover a cocktail from another age. It keeps the palate from getting bored with the quotidian gin & tonic, but beware:  once you start down this path you will have one more problem facing you, and that is that these are in fact forgotten cocktails.  You have to type your favorites into your notes and be prepared to whip out your iPhone at any point to show a bartender what you want.  However, most are extremely obliging if they have the ingredients, and the really good ones already have a copy of Forgotten Cocktails behind the bar.