Here’s a fun one: 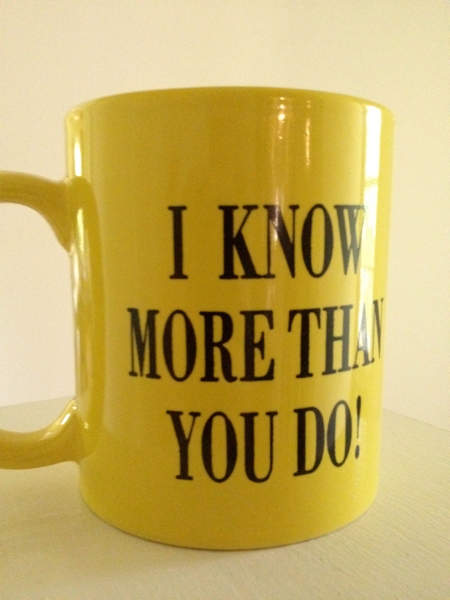 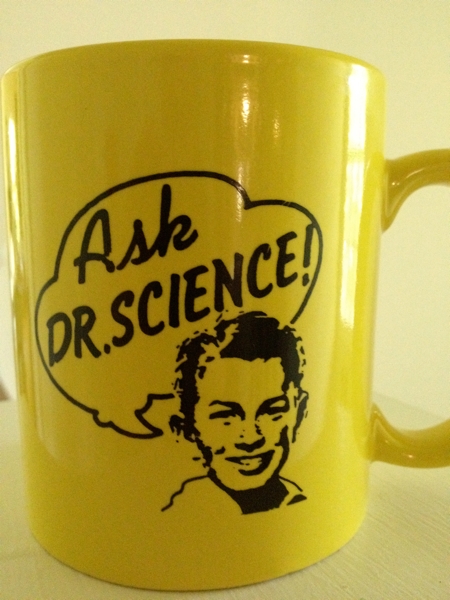 This mug was always part of the grand prize at the NCTC interactive dinner theatre murder mysteries.  It came from the inimitable Archie McPhee in Seattle, and yes, we visited the home store on the same trip we bought my new kilt in 2010.  It was nerd heaven.

I actually have two of these.  I think I ordered one to be a prize in a putative You Don’t Know Jack tournament in the faculty dorm at GHP, but that never came off and so now I have two.  I’d be willing to part with it, so first come, first served!

Dr. Science is a wonderfully snarky anti-anti-science humor site/column/blog/radio bit with the tagline, “Ask Dr. Science!  He knows more than you do—he has… a master’s!”  I’d hear him every now and then on NPR, and occasionally his column would run in the Funny Times (which, if you do not subscribe to, you should).

I was thinking when I started this post that there wasn’t really any neurosis or ritual associated with the mug, but upon reflection I see that there is plenty.

Just carrying this mug around invites multiple meanings, all inhabiting the mug at the same time.  First is the literal statement which just dares people to confront you with your hubris.  Of course, when you’re carrying the mug at an elementary school, it’s even more fraught: the kids giggle because it’s true, and your fellow faculty members have a tendency to get a little defensive.  (Sidenote: it is always amazing to me how the general public assumes that because you teach children their ABCs and 2 +2= 4, your mental capacity must be somehow commensurate.  When I announced I was leaving East Coweta High School for Newnan Crossing, I had people actually ask me if I were taking a pay cut.  No, really, we’re not paid by how tall they are.  At any rate, the people I worked with at the Crossing were amazing; there are more than a couple I would hire for GHP if they had the content I was looking for. Never ever underestimate the elementary educator.)

Where was I?  Daring people to challenge you on your genius: without putting my hubris on display overmuch, I risk even more of a reaction, because people automatically assume that I think that I do know more than they do.  (It doesn’t help that in many many cases I do.)  I would never carry this mug to a family gathering because the response would be vicious and neverending.

Which means that another layer to the mug is the false modesty that any of us with any brains are familiar with.  One has a hearty chuckle with the person reading the mug, assuring them that, you know, it’s a funny mug, isn’t it?  You show them the other side: see, it’s a catchphrase, that’s all.  Social comity is maintained.

And there’s another layer undercutting said comity: the hipster NPR in-the-know-ness of it all.  I may not know “more” than you, but I do know who this clever descendant of Firesign Theatre is.  And you don’t, you sad little man with your blinkered worldview.  And I shift the handle back to my right hand. Heh.