I don’t know that I have an answer to this one: 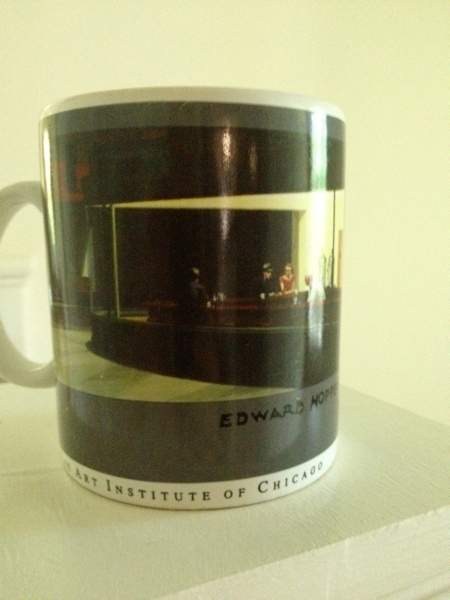 This is a mug I bought at the Art Institute of Chicago in 1993, I think, a visit about which there will be another mug and another post later.

Nighthawks, by Edward Hopper, is one of my favorite paintings, and I cannot tell you why.  That’s the neurosis we will explore in a moment.

It is such a favorite that my lovely first wife actually gave me a very nice print of it.  I had it framed, and she suffered me to hang it in the bedroom: 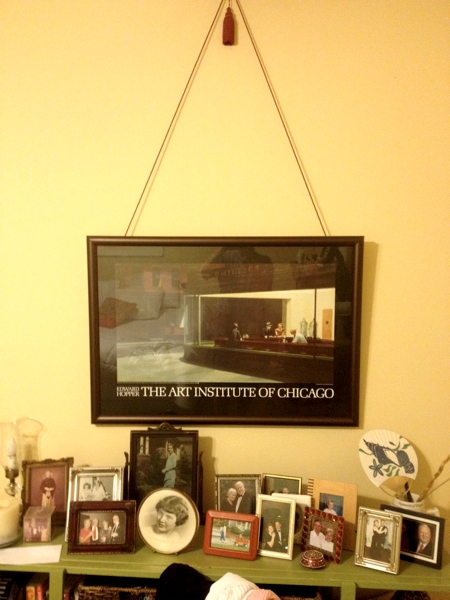 And I have a t-shirt that is in my GHP bin: 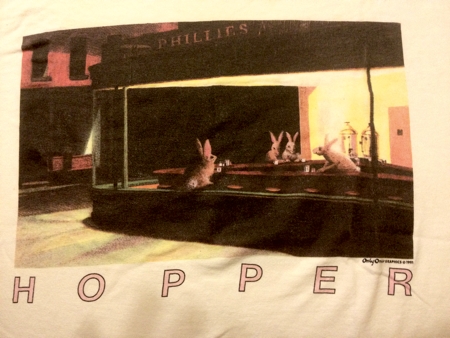 It is a great irony that when I was at the Art Institute gift shop and saw the mug and knew I had to have it, it wasn’t until I bought the thing that I realized that my favorite painting was hanging in that very building—and I had failed to catch it!  At that point it was too late to re-enter the museum and find the wing I had missed, and so I have never seen my favorite painting face-to-face.  I have the mug, though.

Again, I have no ready answer.  The piece is generally regarded as emblematic of mid-20th century American disaffection/angst, and I don’t think of myself as that kind of person.

I could be wrong—I have felt that level of ultimate disconnectedness from others around me.  Perhaps the painting evokes that sense of loneliness that I know I have suffered from at different periods of my life, and from which I have fled to GHP and the Lichtenbergians.

Still, in the pie graph of my soul, that slice is such a very small percentage that it cannot explain why I love this painting so.  If I were to choose to live in the world of any painting, I’m sure it would be some Rubensian scene of Dionysian revel, not this silent, clean, brightly lit Moderne eatery with its  coterie of strangers after midnight.

Perhaps I love the depiction of such dark loneliness: spare, elegant, balanced.  If I’m going to descend into the dark night of the soul, this is the way I want it, not some baroque and fussy misery, full of trash cans and derelicts and honking traffic.  Even in my personal hell, I want meditative silence.  (Personal heaven, of course, is Rubensian Dionysism.)

As for ritual, this mug doesn’t really have any attached to it.  I never, for example, picked it up to signal any kind of weariness or despair, because 1) that’s not who I am; and 2) that would be cheesy.  If I used it for any kind of signifier, it would have to be in the same vein as the t-shirt: Yo, I’m an art geek, and this is the way I roll. Hopper.  Yeah, that’s right.  ::nods smugly::  How about another cuppa joe there…