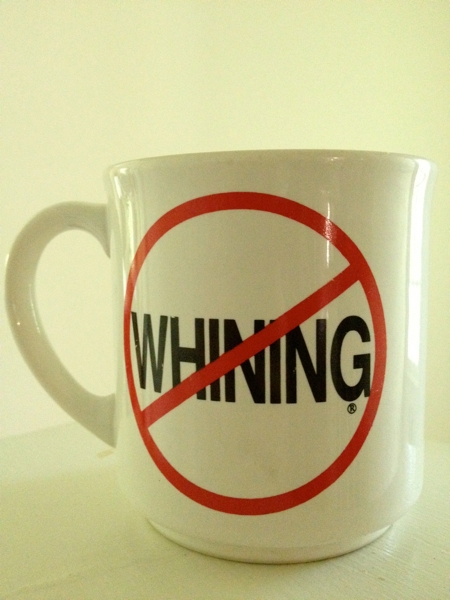 And I mean it.

This mug is actually more ritual than neurosis.

I found this mug in the gift shop at Montreat, the Presbyterian mountain conference center.

As usual, a little history: growing up at First Baptist, I was aware of Ridgecrest, where Baptists had their summer music camps.  I never went to one, and I’m not sure why.  It’s possible that my family could not afford it, and very probable that I was too insecure to go to something like that.  (Maybe there is more neurosis here than I thought: I was in many ways a blighted child.)

Montreat is right over the ridge from Ridgecrest, and I became aware of it while serving as music director for Newnan Presbyterian Church, a position that I discovered I had been appointed to while I was away at GHP in 1990.  Because of GHP, though, I was not able to attend that music camp either.

However, in 1995 I was not doing GHP, and it was decided that the church would send me to Montreat.  I was actually excited about this: a week in the mountains with 300 musicians, studying music and conducting and arranging. Plus, we got to sing!

There was a select chorus, but you had to send in an audition tape, and I was too insecure to do that. When I got there, though, it seems that a lot of people were too insecure to do that, because they were having auditions the first afternoon.  So I went, and I made it into the group.  That was cool, because we were singing the Duruflé Requiem and a couple of other pieces, and our conductor was a British man whose name I forget—he was John Rutter’s conductor.

Anyway, on Wednesday, I got a phone call: Ginny’s paternal grandmother died.  I had to leave to drive to Abingdon for the funeral.  The only time in my life that I got to go to music camp, and I couldn’t even stay.  Not that I’m bitter or anything.

So, the mug: I found it in the gift shop at Montreat and I snapped it up.  It’s perfect for a church choir director, of course, because choristers are notoriously whiny.  I won’t say mine were.  I will not say that.  Just not going to say that.

Two years later, I was the assistant program director for instruction for the Georgia  Governor’s Honors Program, and as I was packing for the summer this mug made the cut to go.  It became my ritual to bring the mug with me to the first staff meeting on Thursday morning while wearing my Space Ghost “Don’t make me use the spank ray!” t-shirt.  Those two items were my staff management policies in a nutshell, and I think they were effective: a firm hand, but a light touch.  [Jobie, do not go there.]

Whining is pointless and should be stamped out wherever it occurs.  Whining is, as far as I’m concerned, just a way to tell me that you don’t want to be there, and for GHP staffers I can make that happen.

Whining is not bitching.  Bitching is OK, because bitching is targeted.  Bitching can identify a problem that I will then invite you to help solve.  Feel free to bitch to me.  But whining?  Go do that somewhere else.

And please don’t be like Jobie, who strives to provoke me into using the spank ray.  Such a nerdvert…