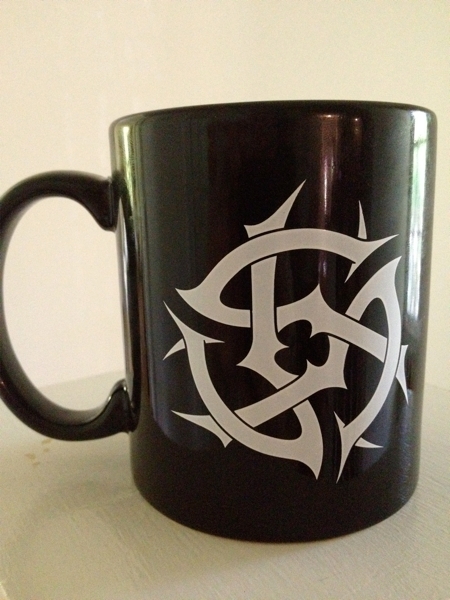 Here you see the triskelion-like logo of Utilikilts, built from its motto of “Form Follows Function.”  The mug came from the Seattle home store and was brought to me by Kevin McInturff.  He called and offered me the choice of a mug or a t-shirt, and one of my neuroses is that I’m pretty sure my torso in a t-shirt does not do justice to the product.  But I can rock a coffee mug.

My love affair with these sturdy masculine unbifurcated garments began when my son decided he wanted to wear a kilt to his senior prom, and that idea came from our trip to Scotland in 2003.  Actual tartan kilts are very expensive, and so of course I went to the web to find a kilt rental service. The wonders of the internet being what they are, I found several services in Atlanta, but I also came across the Utilikilt.

[Synchronicity break: the man from whom we rented the kilt was from Athens, and so he met us at St. Phillip’s Cathedral in Atlanta—where he was playing a music gig—so Grayson could try on a couple of kilts for size.  He had his young son with him.  While Grayson was in the men’s room, I wandered over to peek into the gorgeous sanctuary.  As I approached it, out came Mozelle Christian, who was the founder of the State STAR Student program.  I had not seen her in a couple of years, but I recognized her immediately and she me. (For those who do not know, I was Barbara Petzen’s State STAR Teacher in 1983 and have chaired the selection committee for about 20 years.)  Four or five years later, the inevitable bagpiper at GHP (we always have one, and yes, he wears his kilt) was the young son of the kilt guy.  It’s like living in a novel, guys.]

Anyway, I offered to buy Grayson a Utilikilt for graduation, since he was heading off to the dirty freaking hippie school of Guilford, and he accepted, choosing the Survival model.  I was already at GHP that summer (2006) and as I was getting ready to hit the Order button, I decided I wanted one too. I ordered the Mocker, since it was a little dressier than the other models.

The dressier styling was important, since I intended to wear it about the campus, which I did as soon as it arrived.  Instant sensation, of course: the GHPers were thrilled and intrigued, and I was cool.

As the years have gone by, I added an Original to my wardrobe, and Grayson handed over his Survival, which I now use for yard work.

These things are immensely comfortable, and the pockets are capacious, especially the Survival model.  At GHP, it has become my trademark so much that I come across things like “You know you’re not at GHP any more when you wonder why your assistant principal isn’t wearing a kilt” on the internet, or a student in Jobie Johnson’s class at Gwinnett School of Math, Science & Technology whispers to me, “You’re not wearing your kilt?”, or when at a STAR Student Banquet one of the Regional STAR winners bounces up to me and blurts out, “Mr. Lyles, I didn’t realize you were the kilt guy!” in front of my brand new DOE boss.

Now there are two other faculty guys who wear their kilts during the summer, though theirs are more traditional style, and as I mentioned, there are always at least one or two boys who bring their dress kilts and wear them to evening events.  We’re all cool.

This daring sartorial display is completely neurotic of course: every summer, I take a deep breath before heading out the door the first time, because I know that I risk 1) being ridiculous; and 2) being called out on it, if not by GHP kids, then by the many other types inhabiting the campus.  And of course I know that I look nothing like the men in the photos that Utilikilts.com decides to publish on its website, mainly because they’ve never published any photo I’ve sent in. 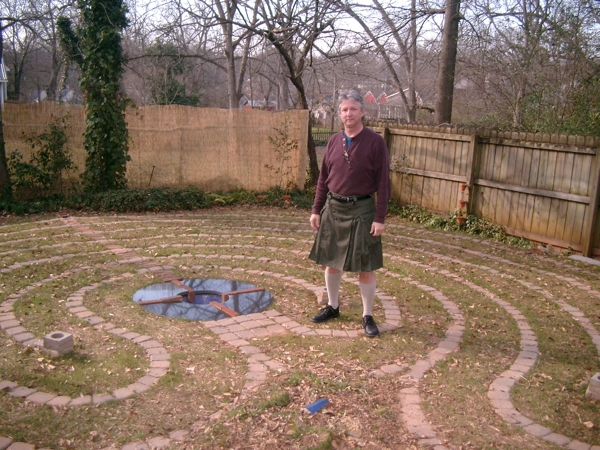 My wearing of this garment at GHP is also a ritual: it’s one of the many ways we shake the kids out of their presumptions about their reality.  If the director of the program is wearing a skirt, along with half the science department, we’re not in Kansas any more.  They begin to learn the GHP lesson that different is gooder than nice, or whatever it was Sondheim said.

Another ritual with the kilt: at Newnan Crossing, I would raise money for Relay for Life by challenging the car riders to donate $500—and if they did, I would direct car rider traffic in my kilt.  If the rest of the school chipped in another $300, I’d wear it all day: 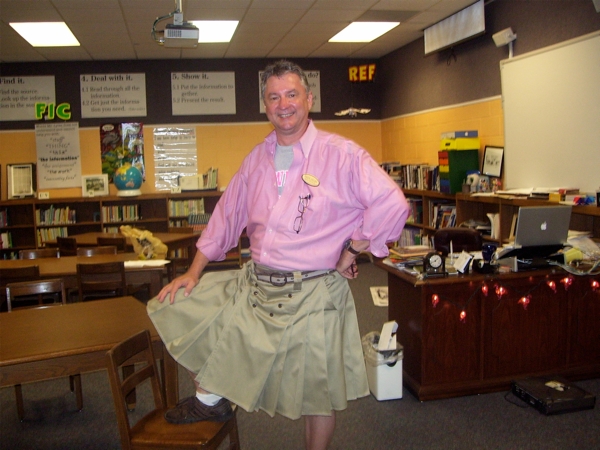 So why do I keep the Utilikilt mug?  Because it is a talisman of my macho, cool, comfortable kilt.  You wish you had one.