You know how some things catch your eye and your heart, and they seem like a really important idea—because they are—but after a while you really forget you were ever a part of them?

BookCrossing.com is one of those ideas for me. 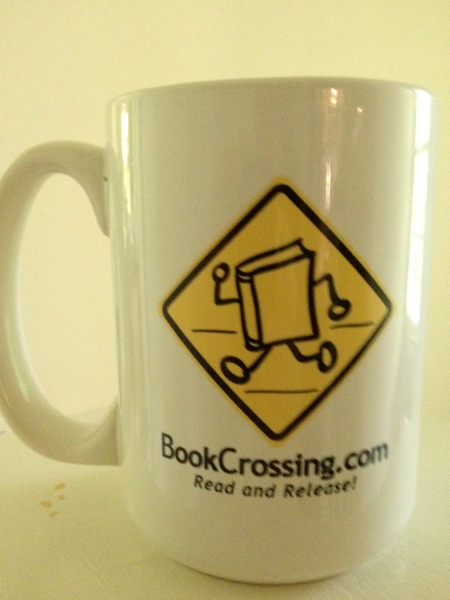 The idea is very simple: after you read a book, register it at BookCrossing.com with its own unique number, and then release it in a public place (which you have noted in the release notes online).

Others will find it and take it to its new home, whereupon they—reading both the bookplate and the bookmark you’ve left inside—will go online and let the world know they’ve picked it up.  Then they’ll release the book, and we weave a comfortable web of like-minded readers across the globe.

I did this quite assiduously for nearly five years  I ordered the official kit of stickers and bookmarks and bookplates (although none of that is necessary) and was quite supportive of the cause.

Generally I would release my books across the street from my house on the low concrete wall.  I think maybe once someone registered them, although they were all taken within 24 hours or less.

And of course I ordered the mug.  I’m all about supporting the cause if it means a mug.

My member name was theOtherDale, because some jerk somewhere had already claimed Dale, even though he had not released a book in years.  Jerk.  But I’m still there.  It seems I released 45 books altogether, the last on September 17, 2009, although its record says TBR, “to be released.”  That’s The Courtier and the Heretic: Leibniz, Spinoza, and the Fate of God in the Modern World, and now that I think about it, I may have loaned it to a Lichtenbergian.

Before that, though, we have to go back to December, 2008, to the last book I actually released: One: the Art and Practice of Conscious Leadership.  I didn’t like it,  I find.

So what did I release?  Wizard of Earthsea, a couple of Wodehouses, The Facts Behind the Helsinki Roccamatios, Rules for Old Men Waiting, East Side Story, Lucky Jim, The Known World, The March.  Award winners, many of them.

An Equal Music, by Vikram Seth, which should be a movie.

Wicked, which ought not to be a musical, at least not that one.

More of course, but enough of listing.

So, neurosis and ritual…

Part of the charm for this… ritual… is the idea that I get to show off the depth and breadth of my reading.  Philosophy, National Book Award winners, Booker Prize winners, witty British humor—see who I am, you passersby?  And what a pleasant frisson for you, dear stranger, to go online and find that the book you have picked up, perhaps guiltily even though it’s clearly labeled as traveling, was sent into your life by Dale Lyles.  You know, the theatre guy, and doesn’t he do Governor’s Honors in the summer?

Clearly not, since no one who ever picked up a book made it their business to register it.

Is that why I stopped doing it?  I don’t think so—I think I just stopped buying so many books and reading them. And the ones I did buy and read I started to pass around to my friends.  You will note that the Lichtenbergians were founded right about the time that I stopped.

When the downtown Carnegie opened again, I suggested to the persons vested in that venture that it would make an excellent BookCrossing Zone, because I think the concept comes closer to saving the world when it’s centralized in some way.  People have to know where to find the books, and I’m sure it’s useful to be a regular at some spot.  I thought the Carnegie would be excellent, but the coffee shop downtown would probably be better, as would Redneck Gourmet, actually.

But I have failed to become the local champion.  I am not alone, as can be seen when Hunting for a book in Georgia.  Lost steam there somewhere.  It now appears you can link your  BookCrossing account to your Facebook account—I wasn’t even a member of  Facebook the last time I released a book.

Still, it was a pleasant thing to do, and a gracious way to get rid of books you had no further need of—or indeed, that you didn’t like and had no intention of finishing.  I keep the mug to remind myself that if I got serious about cleaning out books again, I have a noble way to do that.

One thought on “Mugshots: BookCrossing”