I finished Prelude (no fugue) No. 2. How’s that for productive? Actually, I started work on it, decided it was too pretty, and started over.

It’s actually more vigorous than I originally planned for it to be. The original idea was for a more gentle, gracioso, melodious thing, to become between the outrageous faux-counterpoint of No. 1 and the hyper-Romantic No. 3. Oh well. Now everyone has to wait until No. 4 to take a break. Because Nos. 5 & 6 are going to be tough for everybody.

I got bored waiting for our yard man to show up, so I devised a cover for Pieces for Bassoon & String Quartet. 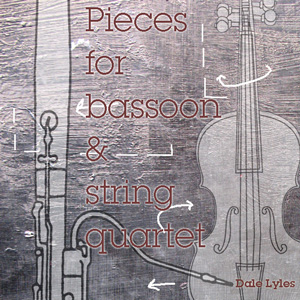 It occurred to me that I don’t really have a page for my instrumental music. Over on my “real” webpage, I have a page for my choral stuff, and not even my newest of that. I’m thinking of making the blog my web page, period, and adding a page for all my music. Because of course the only reason we haven’t heard more performances of Pieces for Bassoon & String Quartet is that people haven’t had a page upon which to find it.

Come to think of it, we haven’t heard any performances of PB&SQ. Michael Giel, what is wrong with you?

I’ve had on my to-do app, for days now, to reconstruct “Children of the Heavenly Father,” the ill-fated hymn arrangement that should have warned me off composing years ago. Why “reconstruct,” you ask, as well you might? Because it got left behind on hard drives gone by, on musical software so quaint that the young folk marvel that we could do more than bang the rocks together.

I tried half-heartedly to find a physical copy yesterday, but if the music exists —and I know it does, I just know it —it’s in a box of all the stuff I wrote for the Presbyterian choir, in the attic. Too hot, too icky. Much easier to find the computer file, I thought.

Right. You know those geeks who still have every computer they ever owned? That’s me. Almost. I did give my 7500 (is that right?) to the theatre, and I had even revved up the chip to a G4, baby. But I still have my SE/30, my PowerBook 190 (oh yeah, I had a laptop), my blue-and-white G3/G4. I would have my old MacBook Pro, but it was stolen last November.

So I sought out “Children of the Heavenly Father” on both the old PowerBook 190 and the SE/30. Neither would even come on. Well, to be fair, the SE/30 is over 20 years old, and the last time it even ran I had to give it a whack on the side to get the solenoid started. But still. It was heartbreaking.

Even I had been able to get either of them running, what then? None of the cables would feed into anything I have in the house, needless to say. And where would I have found a 3.5” floppy? And then how would I have gotten it onto my MacBook Pro?

And finally it dawned on me—even if I find the file—it’s from some music software so quaint that the young folk marvel that we could do more than bang the rocks together.

I drove to Sam Flax in Atlanta— and trust me, I only do that when nothing local will serve—to pick up my gallon of White Absorbent Ground that they had ordered for me. I also got a color wheel (thanks, Diane!), a tube of raw sienna (mine had completely dried up on me), and a palette knife. I used to have one—I probably could put my hands on it if I had to (ah, but I was wrong about where I thought it was)—but it was never as elegant or precise or as flexible as this lovely thing is.

Then back to Newnan, where I charmingly thought that perhaps a light rainfall —perhaps—might intrude on the evening, so I went ahead and set up candles and the makings of a fire in the labyrinth. Then upstairs I went to check on mail while dinner was in the microwave, and then back downstairs to find the deluge upon us.

I dashed outside to grab all the candles and cover the firepit. Modesty must draw a curtain over the state in which I finished my labors. I sat awhile in the torrents of water, luxuriating in that unrepentant sense of being completely wet when you have no reason not to be dry, until I realized that all that lightning was occurring right over my head. I tiptoed back up to the house, stripped off what remained, and toweled dry.

I actually repeated this, believing the storm to be past, although I was more sensible than to get a fresh change of clothes drenched. After the second rain-soaked reverie, however, I was done.

Throughout all of this, I completely forgot about our bedspread, freshly washed and hanging out to dry on the deck.