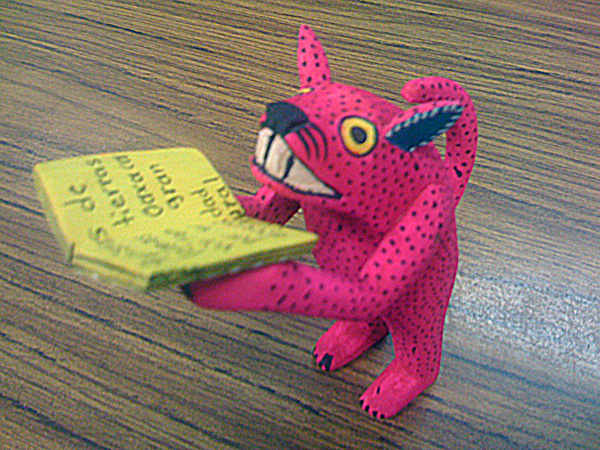 Look at this little guy? Isn’t he cute?

I am not given, as a rule, to enthusing over such things in an overt, little-girl-squealy kind of manner, but last Thursday night we were in Decatur and visited one of our favorite stores there, Mingei World Arts, and there was a whole display of these bizarre, wonderful little creatures, about 50, all different and all of them reading.

I couldn’t contain myself.

I oohed and aahed so much over each and every one that I attracted the attention of the owners of the store who guessed correctly that I must have something to do with reading in my real life. I told them who I was, and they told me about the figures.

The school in La Union, Oaxaca, Mexico, has a library, but the children cannot take books home from there. And so Libros Para Pueblos (in Spanish, and the English button doesn’t seem to work) was formed to establish circulating libraries for the children. They can open a library and sustain it for a year for $1,000.

So the good ladies of Mengei cut a deal with the village of La Union, to donate 20% of the sales of these figuras, carved there in La Union, to Libros. I think I’m remembering correctly that they very quickly raised multiple thousands for the children.

Anyway, all of the animals are reading books. There were dogs and zebras and elephants and lions and mermaids and nearly everything you could think of. My favorite was a large cat, about fifteen inches long, with a rat dangling from its mouth, and the rat was reading a book. Of course, a figura that size is very expensive, about $200. None of them were cheap.

But I find Oaxaca wood carvings (follow the link and make sure you look at the galleries) irresistible. There’s something endlessly intriguing about them. The store had a lot more from other villages, larger, even more fantastical (and more expensive), but I had to have one of the La Union readers.

It took me a long time, but I finally settled on this little guy. His carver was Calixto Santiago, who appears to be somebody in the carving community. Color being what it is on computers, you’ll have to imagine his brilliant cerise coat, his vivid yellow eyes and book (which is purest lapis lazuli underneath), and his emerald green ears. He is no more than five inches tall.

There is some question as to his species. Others have suggested that he’s a jaguar because of his spots; I’m thinking he’s a rat because of his incisors, but he could be some other rodent. Anyway, I find him absolutely charming. I will be collecting more.

One thought on “My Reading Rat”