The bowl has cracked as it dried, which is to be expected: it’s thick and dries unevenly, and the drain hole presents a further issue. The cracks are developing around the hole as the bowl shrinks away from the center.

Not to worry, my professional advisors tell me. First of all, the cracks are fillable. And even if they reappear in the firing, we’ll just plug them with slip and glaze. Failing all of that, there are several epoxies we can use post-glaze. So I’m not worried. 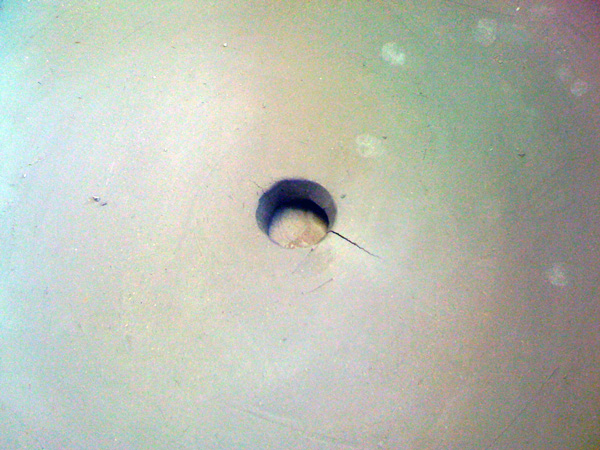 So I’ve been sketching. Not assiduously mind you, but I’m working. I’ve focused on photographs of my fellow Lichtenbergians taken in the labyrinth, and specifically their faces. This is a very hard thing. This week I’ve worked on my own portrait, and I’ve finally produced one that sort of looks like me.

I’ve also produced several that have a vague resemblance to my grandmother in her dotage. I persevere.

Mostly it’s the eyes and the nose. I need to go back to my reference books I brought with me and do some actual studying on “how to do it.”

In other news, after hearing “I Dance a Clubfoot’s Waltz,” our string teacher welcomed the chance to have his students read through a completed version of it. I’ll be working on that tomorrow morning.

The problem at the moment is that I’ve grown accustomed to its little 20-second form. Taking a crowbar to it and prying it open for more development is very scary. I think it will open the same, but then take some basic fragments to build on, the pizzicato triplets, the hammered hemiolas, and the bassoon phrases, returning to the current piece as a recapitulation and coda.

I went to the library to check out a score for Shostakovich’s 8th Symphony. (I wanted his string quartets, but those apparently are still in the acquisitions department, since June of 2006.) While I was there, I thought it would be fun to find my Dance for Double Bass Duo & Marimba on the shelf. Using my trusty iPhone, I found the call number and tracked it down.

They have the score and parts, but they have also copied the score into a little booklet which is shelved separately. It was fun to see it. And then I noticed that it had been checked out to interlibrary loan back in April. Wow! One wonders who found it and ordered it? Clearly whoever it was didn’t find it interesting enough to perform, or surely they would have contacted me.

Anyway, the current piece cannot be called “Clubfoot’s Waltz,” I’m sure, so I think it’s going to be another Dance for Basson & String Quartet. I’m going to experiment giving the bassoon part to a second viola or second cello, but it will probably remain for the bassoon.